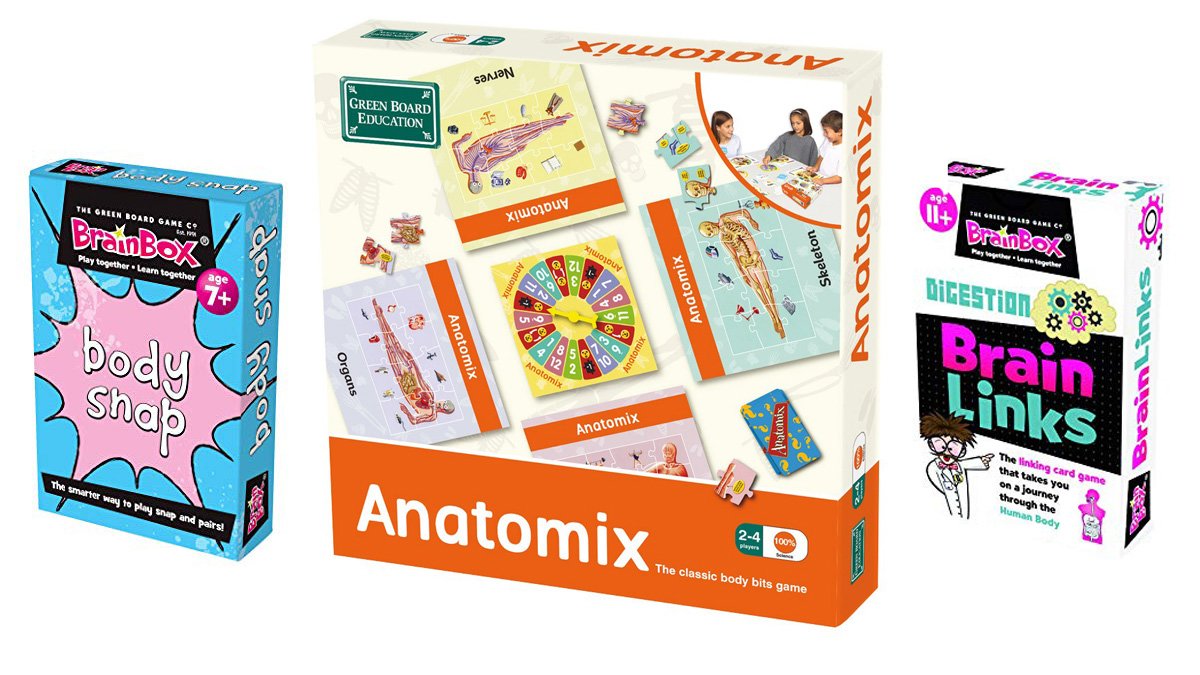 Over the last year, I have shared a series of posts about educational games that cover a variety of subjects including math, literacy, geography & history, and even Ancient Egypt. Today I’m taking a look three human biology games from the Green Board Game Company. These games teach anatomy, bodily systems, and fun facts about the body and the history of biological science.

The first of the human biology games we played is Anatomix: a trivia game for two to four players. In Anatomix, players compete to complete jigsaw puzzles showing four different body systems: Nerves, Skeleton, Muscles, and Organs with the first person to complete their puzzle winning the game.

A game of Anatomix begins with each player choosing a board. All the pieces are placed face down in the middle of the table and players begin their turn by spinning the spinner. If the spinner lands on a number space, they must answer a multiple choice question from an Anatomix card correctly (this step is skipped for very young players).

Not every card contains questions, a small percentage contain challenges to perform such as whistling a tune, reciting the alphabet backward, hopping on one foot, or wiggling your gluteus maximus. If they answer correctly or perform the challenge to the satisfaction of other players, the player can choose a piece matching the number they spun and turn it over. If it belongs to their puzzle, they place it on their board. If it belongs to another player, they keep it face up in front of them.

Anatomix is probably the most fun in this collection of human biology games. It is easily adaptable to different levels of knowledge and having all the questions with between two and four multiple choice answers means everyone has a good chance at getting the answer right, even if they have no idea what is correct. I also liked that the entire game is presented in three languages: English, French, and Spanish as this means it can pull double duty educationally speaking and help with language skills too. The game is easy to explain and easy to play so the whole family can play together without anyone feeling overwhelmed by complicated rules (although they might be a little unnerved by the four bodies on the player boards all sitting in what I call The Goldblum pose…) Anatomix also came with minimal packaging, has almost no plastic pieces, and is made from largely recycled cardboard, which makes it highly environmentally friendly.

We did, however, have a few issues with the game. First, we have never managed to actually play to the end of a game using the proper rules – it just takes too long. It can take several turns to find any of your pieces because they are all face down (in one game I half completed another player’s jigsaw before finding even one of my own pieces) and the ability to take pieces from other players and have them taken from you makes it last even longer, to the point where we were starting to get bored long before anyone was near completion. An easy solution is to have all the pieces face up on the table as this does help speed the game up significantly. Our second problem was that the four player boards and corresponding pieces are designed in light pastel shades and the pieces often look so similar it’s hard to tell which board a piece belongs to. I imagine this would be even harder for any colorblind players to contend with.

All in all, Anatomix is a really fun family game that will help your children (and yourselves) learn all sorts of interesting facts about the human body.

Next up in this roundup of human biology games is Brain Links: Digestion. This is an unusual card game where players must compete to empty their hand by laying down cards in chains with each card linking to the others beside it. Aimed at older children and teenagers, the cards don’t only feature body parts but also related scientists, lab tests, molecules, and other things related to the process of digestion.

The game begins by separating the Food, Mouth, Pharynx, Oesophagus, and Stomach cards from the rest of the deck. The Food card is laid face up near the left-hand side of the table and the other four separated cards are shuffled and dealt out to the players (if there are three players, one will receive two cards). The rest of the deck is shuffled and cards are dealt until each player has five cards in their hand, the remainder is left face down on the table.

Rules are also included for a variant game where the subtitle of each card is read aloud and players must guess its title. If they guess successfully, the player gets to keep the card and the player with the most cards, once each one has been read out, is the winner. We have also played cooperatively, working to create a complete chain involving every card in the deck.

This is an unusual game but an interesting one. Most of the cards contain facts about their subject that will help kids learn more about the subject as they play, and creating the chain will certainly help cement information related to the order of the digestive process. Brain Links: Digestion has some rather obscure information included in it, but I did like that it avoided the westernization of science that can be depressingly prevalent by including Arabic and Middle Eastern scientists such as Ibn Al-Nafis alongside their European counterparts.

The game is well packaged without plastic and made from sustainable sources. On the negative side, we found ourselves confused by the duplicate cards on our first playthrough as we weren’t expecting them. I also feel that the suggested age recommendation of eleven and up is possibly too high as my nine-year-old was able to play easily.

This is an unusual, if highly niche, card game that teaches its subject well.

The final entry in this list of human biology games is a second card game. Body Snap is a simple variant of the classic card game Snap that will help you and your kids learn about the different parts of the human body.

Body Snap can be used to play any game that a standard Snap deck can and comes with two sets of simple rules printed on the reverse. Our favorite is game two which has all the cards laid face down in a grid. Players take it in turns to slip over two cards looking for a pair, if they find a pair, they take the two cards. With four cards for each body part, this isn’t as simple as it seems as it can be tricky to spot the relevant parts on some cards. I noticed that grandparents struggled to see the nose, eyes, and teeth marked out on the skeleton cards – they certainly needed their glasses in order to play.

While this is a fun game, I was disappointed by some of the body parts chosen. Even a toddler will generally be able to identify their knees and eyes. I had been hoping for cards that showed trickier body parts like the spleen, liver, or gallbladder as I feel like these would have been of more educational use than a reminder that the skull acts as a helmet. That being said, by nine-year-old boy finds the buttocks cards to be the height of hilarity, so what do I know?!