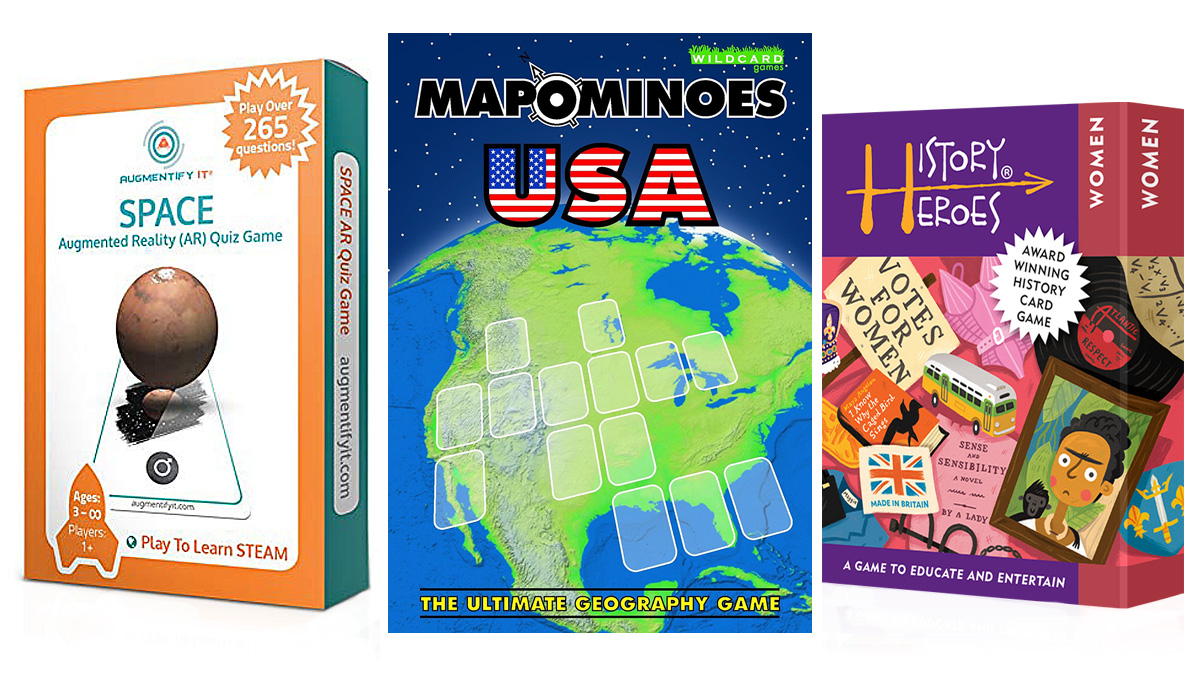 So far this year, I have shared games that teach math skills and literacy skills with you, but what about other subjects? Today I want to share some educational card games that help with geography, history, and science skills. All of them are fun, interactive, and have been enjoyed by my family so I hope yours will love them too.

Teaches: History
For: Any number of players

The first in my collection of educational card games is History Heroes, a series of “guess the person” games that focus on specific groups of historical figures. The current range includes:

Each History Heroes deck contains 40 illustrated cards featuring real famous people from those categories plus instructions on how to play and the decks can be combined together to create bigger and more challenging games. It is worth noting here that there is some overlap between the decks. My family played with the Scientist and Women decks, and I found three cards which appeared in both (Rosalind Franklin, Dorothy Hodgkin, and Marie Curie), but the different backs which are unique to the decks will help you keep track of which card belongs where.

History Heroes is very much open to creating your own rules and playing your own way, but the basic premise goes like this. On each person’s card are six facts. The first two (green) facts are the “easy” facts that should make guessing the person relatively simple, facts three and four (amber) are a little trickier, while facts five and six (red) are difficult. There is also a Joker Fact that is usually very obscure. The person holding the card reads out the facts of their choice while other players have to guess who is on the card. Whoever guesses correctly wins the card, and the person with the most cards at the end is declared the winner.

Of course, when played frequently enough, players will quickly begin to remember the facts making the game easier and less challenging, but with an educational game such as this, I would argue that is a good thing unlike in many trivia games. The color system also allows the game to be played fairly across groups with a wide age range with kids getting the green facts first while Uncle Arthur the historian gets red facts or even the Joker facts at the bottom of each card.

While possibly the least game-like of the three educational card games here, History Heroes is also probably the most educational, and at only £10 a deck, they are well priced to pick up an appropriate deck to tie in with what your child is learning at school. I will certainly be picking up the new Space deck when my son studies the subject next year.

History Heroes isn’t available in the US just yet, but the company is actively courting distributors so, hopefully, it will be available to our US readers soon. For now, you’ll need to find a UK friend and ask them to order them for you.

Teaches: Science – Chemistry, Physics, Astronomy, Biology
For: Single player or explore together in a group

Speaking of space, next in my list of educational card games is a game that brings the planets and other astronomical objects right into the palm of your hand. AugmentifyIt combines a physical card game with augmented reality on your phone or tablet to bring science to life.

There are three decks currently available, Space, Elements, and a brand new Oceans deck that I’m excited to try out one day.

Without a screen, the cards can be used like ordinary flashcards. Each card has an image on one side and a list of facts on the reverse which can be used to test your knowledge, but it’s when a screen is brought in that the fun really starts! By switching on the free AugmentifyIt app and pointing your camera at a card, a 3D model of the object will appear on screen, allowing you to explore it from all angles. Looking at a card on the app also triggers a quiz that you can play with questions about that object.

I’ll be the first to admit that the Elements AR is hugely lacking compared to the Space cards. While the latter involves looking at models of planets, stars, moons, and other objects (the black hole card is particularly fun to play with), the Elements are simply a collection of blandly colored blobs. The quiz aspect is still just as interesting, but the AR aspect is unlikely to capture anyone’s interest, and I can’t help feeling the developers would have been better off creating AR images of objects primarily made from that element, much as is seen in the Happy Atoms app. The Space cards, on the other hand, has everyone from kids to adults crowding around to look at the screen and have a go themselves. There’s something awe-inspiring about holding the Sun in the palm of your hand, and as AR and VR technology continues to grow, games like this will only improve.

AugmentifyIt also isn’t available in the US yet, however, US readers can order this one direct from Amazon UK.

The final entry in my list of educational card games is Mapominoes. This game is played in much the same way as traditional dominoes but uses countries or States with shared borders on its cards. There are many different versions of Mapominoes available now including:

For this review, we played with the Europe and USA editions.

There are two different card types in Mapominoes, Country/State Cards and Transit Cards. Country/State cards show the name of the country or state, its land area and population, flag, capital city, and its relative position. Around its borders, the cards show which other countries, states, and oceans share a border with it—these are the cards that it can be placed beside it when playing the game.

Transit cards work as wildcards or blank Scrabble tiles. If you are unable to play a Country/State card, you can place a Transit Card instead. When a Transit Card is placed, it is nominated to represent a single other Country, State, Ocean, or Sea. Any other card placed later in the game that borders the Transit Card must also share a border with the nominated location.

At the beginning of a Mapominoes game, each player receives two Transit Cards with the remaining ones left on the table to form a draw pile. The Country/State cards are split evenly between the players with the final remaining card placed down as the starting card. Players then take it in turns to place their Country/State cards down, and the first person to empty their hand is the winner.

Mapominoes are a range of great educational card games that really help with geography skills. Not only will you begin to learn which countries and states share borders (do you know which countries border Croatia? No, neither do I..) but the additional facts on the cards will also improve your knowledge (for example, the capital city of Montenegro is Podgorica). Multiple versions of Mapominoes can also be played together to create an enormous global game because, for example, both the state of Rhode Island and the country of Portugal border the Atlantic Ocean and can be connected by a Transit Card. You’d need a lot of floor space to do this of course, but we’d love to see photos if you do!

I hope some of these educational card games will help you and your family with homework and other learning. 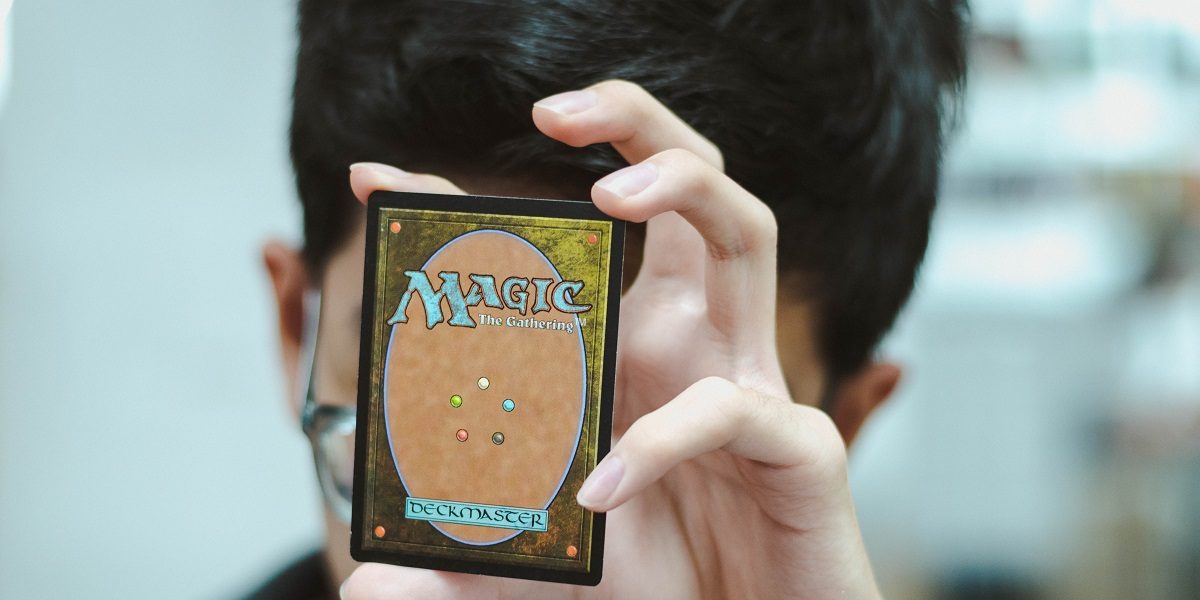 Get the Group Together and Play Pajaggle!