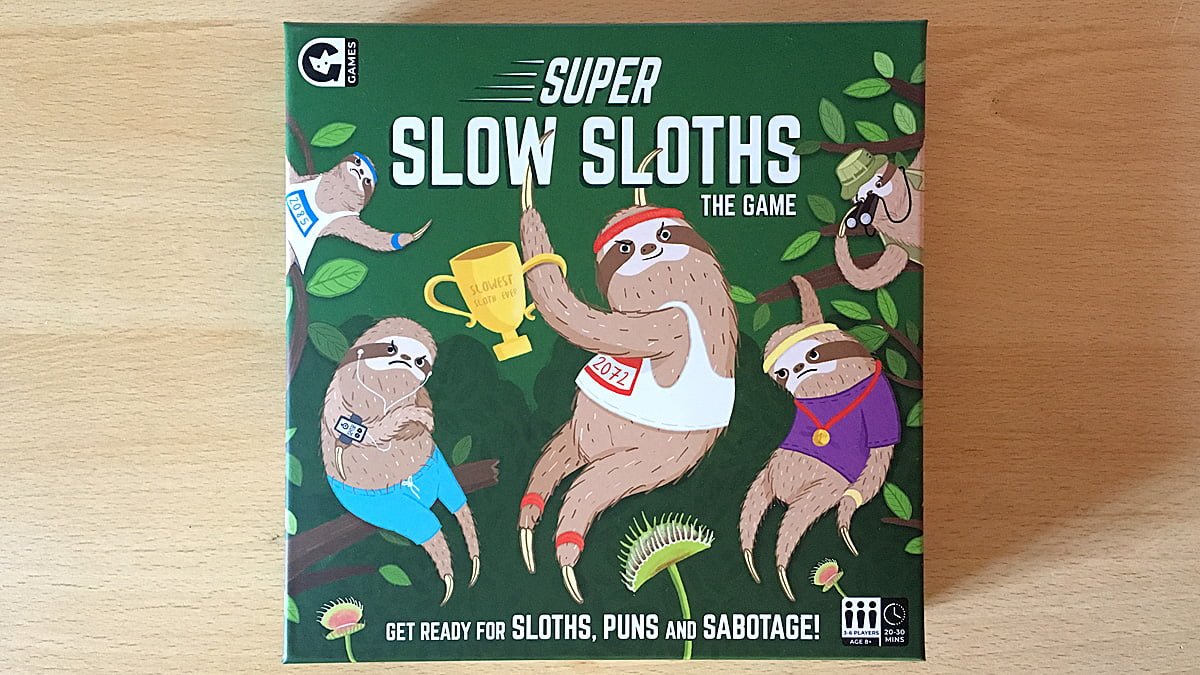 During October and November, I will be reviewing a selection of new games ideal for families during the holiday season, beginning with today’s review of Super Slow Sloths. All the games in this series are easy-to-learn, family-friendly, reasonably-priced, and a whole lot of fun, making them perfect for family get-togethers and playable by everyone from kids to your great-grandma. Check out the Games for the Holidays tag for more. Please note: This post contains affiliate links.

What Is Super Slow Sloths?

Super Slow Sloths is a fun and silly family game for three to six players aged eight and up. In the game, you become one of six sloth characters and compete to be the last one to cross the finish line. Those who are eliminated early don’t miss out on the fun because they get to become saboteurs, messing with the remaining competitors until the end of the game.

I really love the components of Super Slow Sloths. In fact, it was the Goth Sloth playing piece that first attracted my attention to the game at London Toy Fair back in January, and I’ve been waiting to get my hands on him ever since!

All the cards are printed on high-quality card stock and feel lovely during play. The Sloth Spinner is sure to raise a few laughs, as are the characters available for play, which include Slothello, Vincent Van Sloth, and the Slothlete alongside my favorite, Goth Sloth. The jigsaw-style board is great as it allows you to mix up the game each time, including building shorter games by not using every piece.

Sadly, the game gets some negative marks for using a cheap, plastic insert instead of a cardboard one, which would have both looked nicer and also been better for the environment.

How Do You Play Super Slow Sloths?

Play begins by building your race track from the jigsaw-style pieces included in the box. You can use as many or as few pieces as you like for longer or shorter games, however, you cannot have only half a river, so you must either use both river pieces or neither. The race track can either be built in a wavy line shape or in a circle, but the start and finish lines must (obviously) be positioned at opposite ends of the track.

The players must then agree on where to place the Water Station card. This card can be located under any space along the track, but its location will affect the game later on because any time a sloth is eliminated from the game, every sloth currently behind the Water Station moves up to level with its location. Therefore the closer to the end it is placed, the quicker the game is likely to end.

The three stacks of cards (Snooze, Speed, and Sabotage) are placed beside the track and every player decides which character they are playing. The Character Tokens are placed on the start line and the Character Cards are placed in front of the corresponding player, picture side up. The game is now ready to play and the player who is voted most sloth-like takes the first turn.

The active player spins the Sloth Spinner and takes the top card from whichever of the three piles the claw points to. They then read the title of the card aloud, followed by the text from the card—this is very important, all text on the cards must be read aloud including their title for many of the cards to work.

There are several types of cards that may be revealed:

Instruction for You: These cards contain a simple instruction for the active player to follow. Do what they say and your turn ends.

Instruction for a Specific Character: Similar to the previous type of card, these cards contain instructions for a specific sloth character to follow. This may be the active player’s character or that of another player. If a card is drawn that refers to a character who is not in play or who has already been eliminated, the card is ignored and a new card is drawn.

All Play: These cards impact all non-eliminated players who must follow the instruction given.

One-on-One: These cards pit two players against one another in a challenge.

Within these categories are dozens of different styles of cards. Some are simple instructions to move forward or back a set number of spaces while others require a lot more interaction! We had cards that asked us to compete to yawn the widest, recite tongue twisters, hide another player’s token for them to guess its location, sing songs, and tell stories. Thankfully, for those with more introverted tendencies, most of the sillier or more embarrassing actions can be skipped if the player chooses a forfeit such as moving forward one space instead, but we found that even our more introverted friends were generally happy to participate in the majority of actions on the cards.

Other cards are designed to catch people out like the one titled “Baby Sloth” which makes anyone who starts humming the Baby Shark tune in response move forward one space, or the “Slothly, Slothly, Catchy Monkey” card that the active player throws in the air immediately after reading out that whoever catches it gets to move back a space. There was a lot of laughter when we played with my ten-year-old who found making poop noises or doing impressions of a sloth on a branch in order to move back a few spaces utterly hysterical.

In addition to following the actions printed on the cards, some spaces on the track also have instructions for players to follow if they land on them.

The two River spaces are connected so anyone landing on one of these immediately moves to the other—either forwards or backward—unless the card specifically states not to. Landing on the Insomnia space lets you take another turn, while the hurdle forces you to hit Snooze on the spinner before you can move backward past it.

Eventually, a player will cross the finish line and be eliminated from the race. Although they can no longer win, eliminated players get to continue playing by sabotaging the remaining competitors. When they reach the finish line, the player turns over their character card to the Eliminated side which reveals their special skill.

Eliminated players cannot compete in All Play or One-on-One cards but they can judge them. They take their turn in order, however, instead of spinning, they can perform one of two actions.

Use Special Skill: Each sloth character has its own special skill, these include forcing all players to join the sloth closest to the finish line, swapping the positions of all remaining sloths, and moving a single sloth one space forward.

Pick a Sabotage Card: Instead of using their special skill, the player may choose to draw a card from the Sabotage Deck instead. This card is read aloud and the instructions followed as normal. Some cards cannot be used by eliminated players, these are clearly marked on the back and if drawn by an eliminated player, are returned to the deck and a replacement drawn.

The winner of Super Slow Sloths is the final player to land on or cross the finish line. In the event of a card forcing all remaining sloths over the finish line simultaneously, a tie-breaker must be performed to determine the winner. No specific rules are given for this so it’s down to the players to decide.

Should You Buy Super Slow Sloths?

Super Slow Sloths was fun to play, but we felt it would suit a more outgoing household than our own because playing with a table full of introverts (and one over-excited ten-year-old) didn’t result in the most enthusiastic responses to many the cards. I am looking forward to taking it along when we visit family over the holidays in order to sit back and watch it all unfold.

The game will no doubt be ideal for family parties and even for playing in college dorms. Watching your roommate act out being a baby sloth crawling along a branch or your grandma and grandad battle it out in a thumb war will absolutely liven up any Thanksgiving or Christmas party, and while the cards often ask players to perform silly or mildly embarrassing actions, none of the requests are inappropriate for children so kids will be able to join in the fun as well. In fact, I think this game will go down equally well among a bunch of tweens as it will among a group of inebriated adults!

One of the best things about Super Slow Sloths is how easy it is to learn. The simple spin the spinner and pick up a card mechanic is no more complicated than your basic roll-and-move game, but the cards do a great job of making sure no player simply gets to amble their way to the finish line one turn at a time. Lasting around thirty minutes, the game is long enough to allow for lots of cards to be drawn and silly antics to play out, but not so long that players begin to get bored. The combination of the Water Station card and adjustable track also helps allow you to tailor the game length significantly—great for if you want a short game for younger kids.

One thing that kids may struggle with while playing is the puns. Nearly every card has some kind of sloth-related pun involved in its wording and a good number of these will sail right over the heads of younger players, such as the “Slowing Me, Slowing You!” card that rewards any player who responds to the title by saying “Ah-ha!” Kids will love the artwork throughout the game, which is cartoonish and funny. We were especially amused by the Mystical Slothicorn and Sloth-Ward Scissor Hands, although our biggest laugh of the evening when we first played came from the “Raiders of the Sloth Ark” card which states that “a rolling boulder chases you for hours before you realize it isn’t actually rolling.”

While I will admit that the gameplay in Super Slow Sloths wasn’t quite our cup of tea, it is still a funny and easy-to-learn game that will bring a lot of laughter to any table. I highly recommend picking a copy up for the holidays.

UK Readers: Super Slow Sloths has 10% off at Amazon UK today (Sun, October 20th) to celebrate International Sloth Day so be sure to grab your copy ASAP. 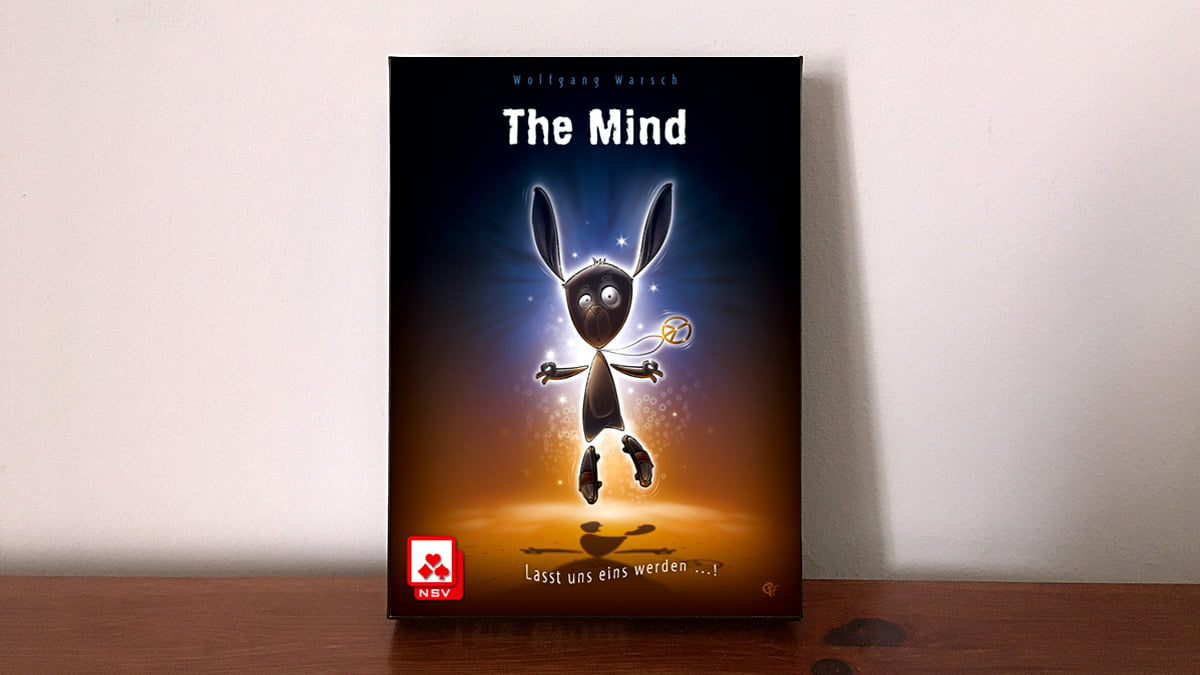 Can You Read Your Teammate’s Thoughts by Playing ‘The Mind’? 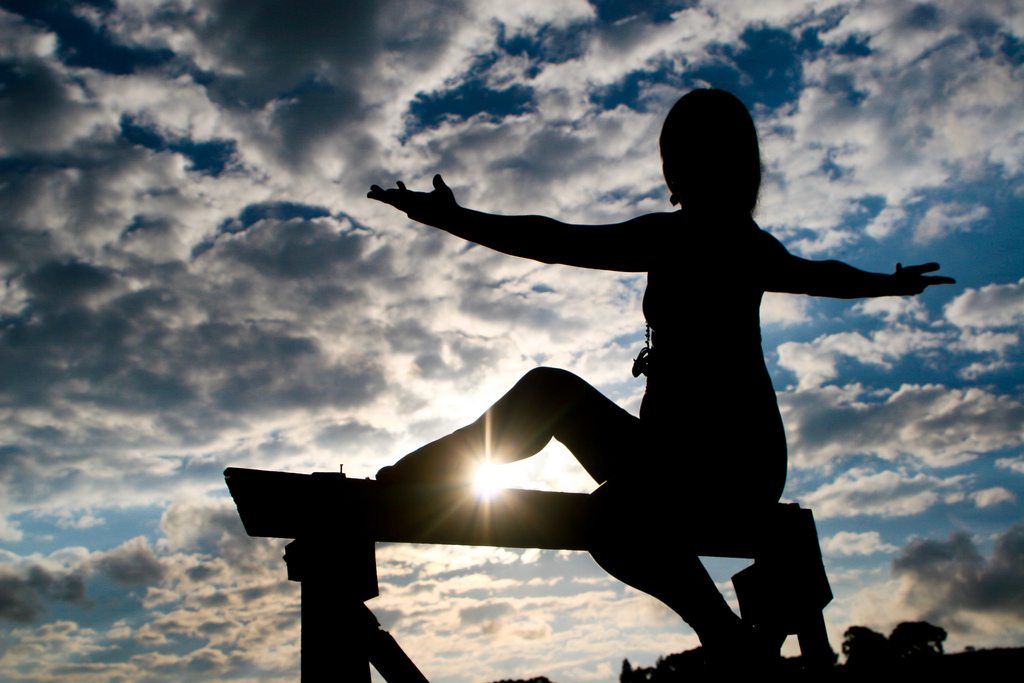 4 Geeky Ways to Find Your Zen After the Holidays