The best stories let us walk the same streets and see the same scenes as fictional characters do, until we look up from the words to find we’ve been there only in our imaginations. But some fiction is based in real world locations. We can go there to experience and understand our favorite stories more fully.

Now a geographer, writer, and a software engineer have teamed up to create Placing Literature, a platform that lets readers map their favorite novels. Anyone with a Google login can add to the database. Users can also explore the map to find literary places nearby.

Connecting literature with geography lends itself to enticing possibilities. Visit parts of the French Quarter of New Orleans mentioned in A Confederacy of Dunces

by John Kennedy Toole. Stroll around San Francisco to spot the places integral to Christopher Moore’s A Dirty Job

. Head off to Chicago to find the scenes mentioned in Jim Butcher’s The Dresden Files series

Read books with your kids based on local scenery or set up a place-related book club.

My fellow GeekMoms have plenty of enthusiasm for the concept.

I CRAVE maps of the places I’m reading about. In The Girl with the Dragon Tattoo

the Swedish version had a  map of Hedestad Island included. I printed out an English version of the map and it helped me immensely. I also had to bring up all of Sweden on Google Maps to follow the characters’ travels throughout Sweden. Similarly, James Michener novels would have elaborate family trees that I desperately needed to reference to keep tabs on who was married to who, who begat who, and so on.

. She’s gone from Virginia (near where I grew up) to Savannah to the Boston and New York areas.

I’ve enjoyed Robert J. Sawyer’s science fiction work for a long time. One of his near-future books is Calculating God

which imagines how meeting aliens would shake up different philosophical and religious world-views. One of my favorite bits is that the aliens decide to land near the Royal Ontario Museum in Toronto (it is perhaps not a coincidence that Sawyer is Canadian). The guards outside the museum at first assume that someone has decided to film a sci-fi TV episode without telling them–it takes awhile for them to realize that these are real aliens they’re looking at. It’s an awesome and hilarious scene, and when I went to Toronto for the World Science Fiction Convention in 2004, I dragged my husband around the ROM until I found the alley where the aliens had parked their shuttlecraft and the entrance where they met the guards. The ROM is worth visiting for lots of reasons–it has truly beautiful displays inside, but Robert J. Sawyer made it a little extra special for me.

Closer to home, Sean Stewart wrote a phenomenally good book entitled Galveston. It was recommended to me

when I moved to Houston and I’m
very glad I read it. It’s about magic flooding into our world and disrupting things catastrophically. On the island of Galveston, southeast of Houston, the new flood of magic is focused on the Mardi Gras celebration held there each year. The story is anchored on the island and centers on the way people make do when they’re cut off from the mainland. Even more than that, it is about families and relationships and failing the people you love. It captures the spirit of Galveston, and also has an intensely taut description of weathering a hurricane without any shelter. The more I’ve gotten to know Galveston the island the more I appreciate Galveston the book. It breaks my heart that it appears to be out of print now.

I loved the setting of Graham Swift’s Waterland

, the Fens of East Anglia. I was so fascinated by the description of the canals and sluices in the book that we took a day trip from Cambridge to Ely the one time we visited England.

I have a thing for water. Would love to see the Dordogne River in France–the place where the river gypsy scenes were filmed in the movie Chocolat.

European canal tour. The Golden Compass was the book that ignited my fascination with the Northern Lights, too. I have decided that the best place to see them would be from a glass igloo.  Someday.

I read and taught The Invention of Hugo Cabret

by Brian Selznick to all of my 3rd grade library classes for the past five years. When the movie came out I even announced to all of my students which screening I was going to so their parents could take them and we could watch it together. My love for that book runs deep; my daughter even has a signed copy. When I went to Paris in 2009 I researched the book’s train station, which is never officially mentioned by name but straightforward to figure out, and trekked out to Montparnasse with my husband to try and find it. The old station was demolished and rebuilt, so he filmed me walking around the neighborhood where Hugo takes place. I’ve used the video with my students every year after that–the kids thought it was hilarious to see me a in a hoodie instead of “library clothes”–and we also used Google Earth to trace my route, guess where Papa Georges’ apartment was, and figure out how long it would take Hugo to get to the Eiffel Tower.

by Marguerite Henry to my boys and was pleasantly surprised to find out that these ponies and the islands they live on are real. I’d love to visit someday!

We followed part of Laura Ingalls Wilder’s travels in Minnesota, Wisconsin, and South Dakota. There are commemorative sites and re-creations in many places, so you get a good feel for the stories in the books, although in some cases the landscape has changed considerably. And it was so freaking hot on our trip that you cannot imagine Pa cutting firewood or Ma cooking over a fire, or a candle staying upright at all.

We also have followed portions of historical literary figures, like the Lewis and Clark trip, and the Oregon trail settlers. We read out loud to each other while we drive. Some of the mountain men have colorful biographies that illustrate the dangers and rewards of travel!

Tell us what books inspire you to explore real world locations. And don’t forget to add them to the Placing Literature map. 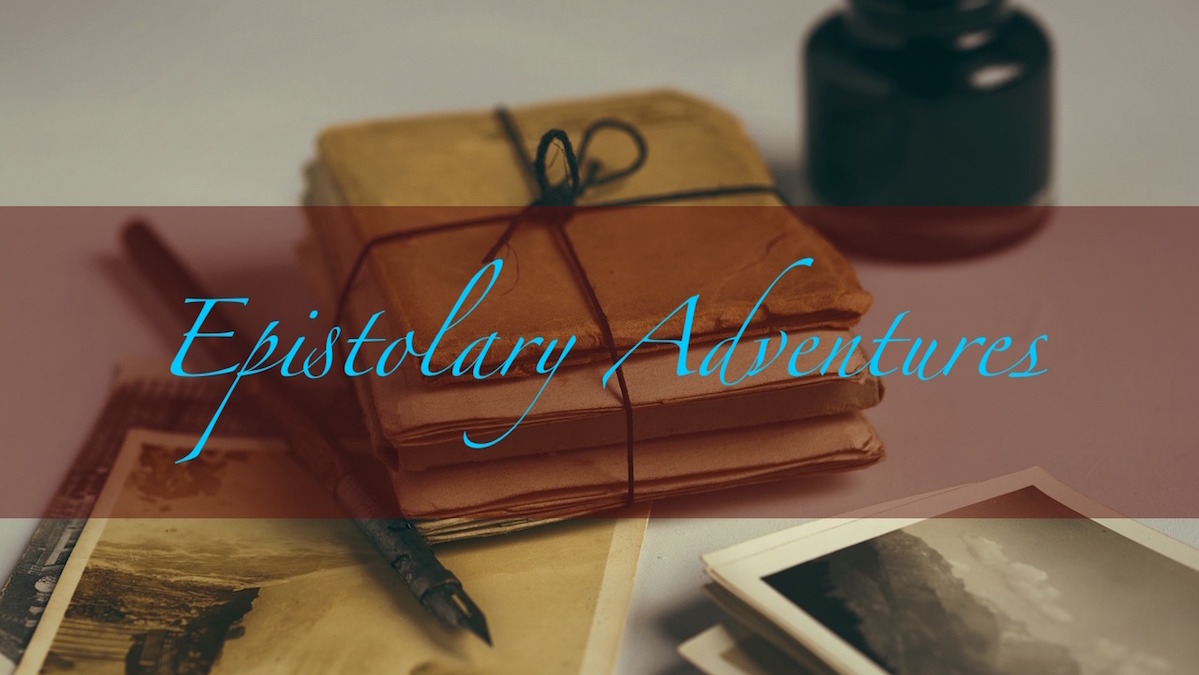 Epistolary Adventures: What Is An Epistolary?