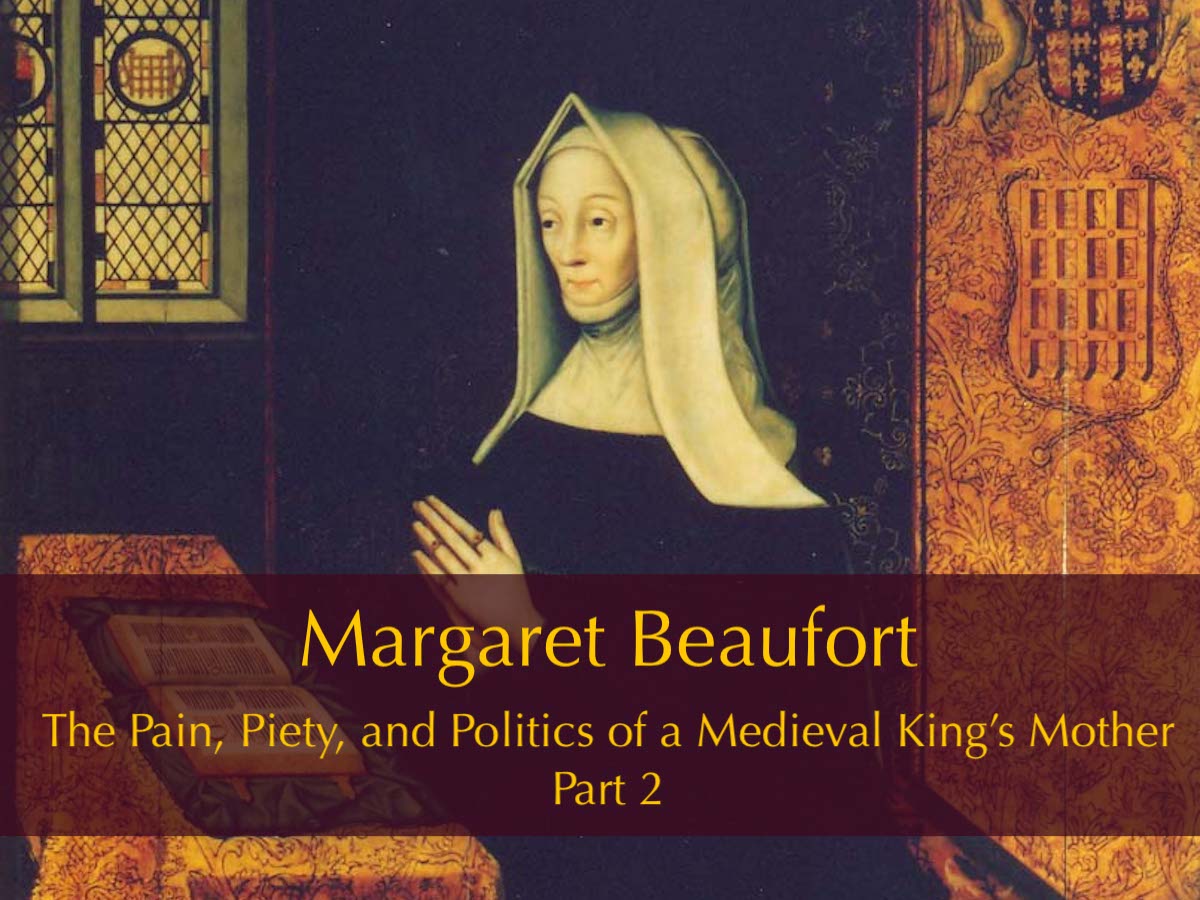 When last we left Margaret Beaufort, the mother of the Tudor dynasty in late medieval England, she was seven years old and had just been married to John de la Pole as a political pawn. This was typical for wealthy, landed gentry of the time. It gave the woman (or child, in this case) security in name, and gave her husband access to her fortune. The marriages wouldn’t be consummated until both parties involved came of age. Unfortunately for Margaret, her now father-in-law had been very unpopular with England at the time of her marriage, and her father-in-law was exiled and murdered. All benefits of this marriage were one-sided, as her husband now did not even have a reputable family. In part two of The Pain, Piety, and Politics of a Medieval King’s Mother, we will explore more of Margaret Beaufort’s youth.

Three years later, when she was ten, Margaret Beaufort was summoned to court with her mother. This was probably the first time she ever met Henry VI. The king had decided he wanted to dissolve the marriage between Margaret and John de la Pole and have her marry his half-brother, Edmund Tudor, instead. Whereas Margaret and John de la Pole were around the same age, however, Edmund Tudor was twenty-two years old.

According to a testimony by Margaret later in life, she was given a choice in the matter. She could either stay married to her current husband or marry Tudor. Accounts claim she couldn’t decide, so she appealed to Saint Nicholas to help her make a choice. This narrative goes along with Margaret’s persona as a deeply devout woman throughout her life. It is said she had a vision of Saint Nicholas, who instructed her to choose Edmund Tudor. It’s not clear if Margaret truly had a choice in the matter, or if the king would have just done what he wanted anyway, but it is interesting to see Margaret taking a more active role in the matter, both from a religious and a political standpoint. She didn’t go to a church to appeal to a priest for help. She chose to go right to a saint himself. Michael Jones compares her action to that of Joan of Arc, and says it was a suggestion Margaret had a strong sense of personal destiny. She wanted control of the situation, or, if this was a tale that she only came out with later in life, she wanted to create the perception that she had some sort of power. In reality, she may not have had much of a choice, saintly intervention or not. The story served her well, however, as it added a sense of wonder to her marriage and gave her piety more gravity.

Two years later, on November 1, 1455, Margaret’s marriage to Edmund Tudor took place. She was twelve and her husband was twenty-four. The following spring, Margaret was pregnant.

By today’s standards, this is of course shocking, but people today might think this could have been normal behavior in medieval times. This was not so. It was encouraged for couples to wait at least until a young wife was fourteen, when her body was more fully developed and bearing a child would be less risky, to consummate a marriage. According to popular historian Dan Jones, “Even by medieval standards, Margaret Beaufort is obscenely young to be pregnant.” There are no records of what Margaret herself thought of the situation, but scholars seem to agree without exception that this was at the very least, a “ruthless and inconsiderate” action on the part of Edmund Tudor, and emotionally scarring for Margaret.

Marriage to Edmund Tudor had its advantages for Margaret Beaufort. She was now the Countess of Richmond, and King Henry VI was her half-brother-in-law. This was a step up for her. Edmund benefited from marriage as well, which could have been a motivation for his early consummation. If a couple had a child at that time, whether or not the child or mother survived, the husband would have been able to keep his wife’s lands and money. While this seems heartless on the part of Edmund, scholars can’t put this motivation aside. Because women were discouraged from speaking out against their husbands, and there are no records from Margaret at that age, we will never know her true thoughts of the situation, whether she felt she was being taken advantage of or not. She was fulfilling her duty as a wife and noblewoman. Yet again, her happiness was nothing compared to her political and monetary value.

Whether or not Edmund consummated the marriage for financial security, it did not matter. He was never able to find out if Margaret or their child survived childbirth, because he himself died before the pregnancy was over. Skirmishes had broken out in England, part of the War of the Roses between the houses of Lancaster and York. Henry VI’s weak Lancastrian rule was falling apart due to his illness and possible madness. His York cousins wanted the throne. Unsurprisingly, Edmund, half-brother to the king, was on the Lancastrian side. He was captured and imprisoned in August 1456 by an ally of the Duke of York, and though he was released shortly afterward, he died a couple months later of the plague that was ravaging the country. He left Margaret a young, heavily pregnant widow. Her value as a political pawn had not decreased, and with war between the Yorks and Lancastrians underway, she was in a very precarious position.

Not only did Margaret fear for her life (and that of her unborn child) because of the war, but she was also afraid she would succumb to the plague. She immediately traveled to be under the protection of her brother-in-law, Jasper Tudor, at Pembroke Castle. A journey in the winter while seven months pregnant would have been almost unthinkable for any woman; for a thirteen-year-old girl, Margaret Beaufort showed extreme fortitude.

Once at Pembroke Castle, Margaret prepared for one of the more traumatic experiences of her life: childbirth. According to several sources, she was of a slight build, and her body wouldn’t have been fully developed yet when she was pregnant at age twelve. Nevertheless, she gave birth to her son three months after the death of Edmund Tudor, on January 28, 1457. Both mother and child survived, albeit not unscathed. Margaret’s young body was likely damaged by her experience. This child, named Henry after the king, would be the only one she would bear, even after two more marriages.

Margaret most likely suffered from mental and emotional trauma as well. In a collection of her books bequeathed to Christ’s College in Cambridge, in the margins of a book that describes marital responsibilities, there is a question written in the margin of a page asking if it was a sin to find sex abhorrent. It’s possible she would never enjoy sex, likely due to her experiences.

Though this was surely a harrowing experience for Margaret, throughout her life she looked back on it as the happiest event of her life. She felt an extremely strong bond with her son from the time he was born, which would prevail throughout his life. Her devotion to him was complete, and it becomes evident that from this point forward, she lives her life with his interests at heart. Her love for him borders on the obsessive, and some scholars attribute this to a possible trauma response to almost losing both her own and his life during childbirth. Certainly the loss of her husband and a country ravaged by war and plague didn’t make things easier for her, either.

If Elis Gruffydd, a sixteenth century Welsh chronicler, is to be believed, Margaret showed some of her early strength of character at her son’s baptism. Jasper Tudor wanted the boy to be named Owen, after his and Edmund’s father. Margaret, however, intervened when she heard the name, and directed the bishop to perform the baptism again. This time, she was clear, the boy was to be named Henry, after the king.

Next time, find out how young widow Margaret Beaufort and her Tudor infant rose to power!

Back to my Childhood: Babar and Father Christmas