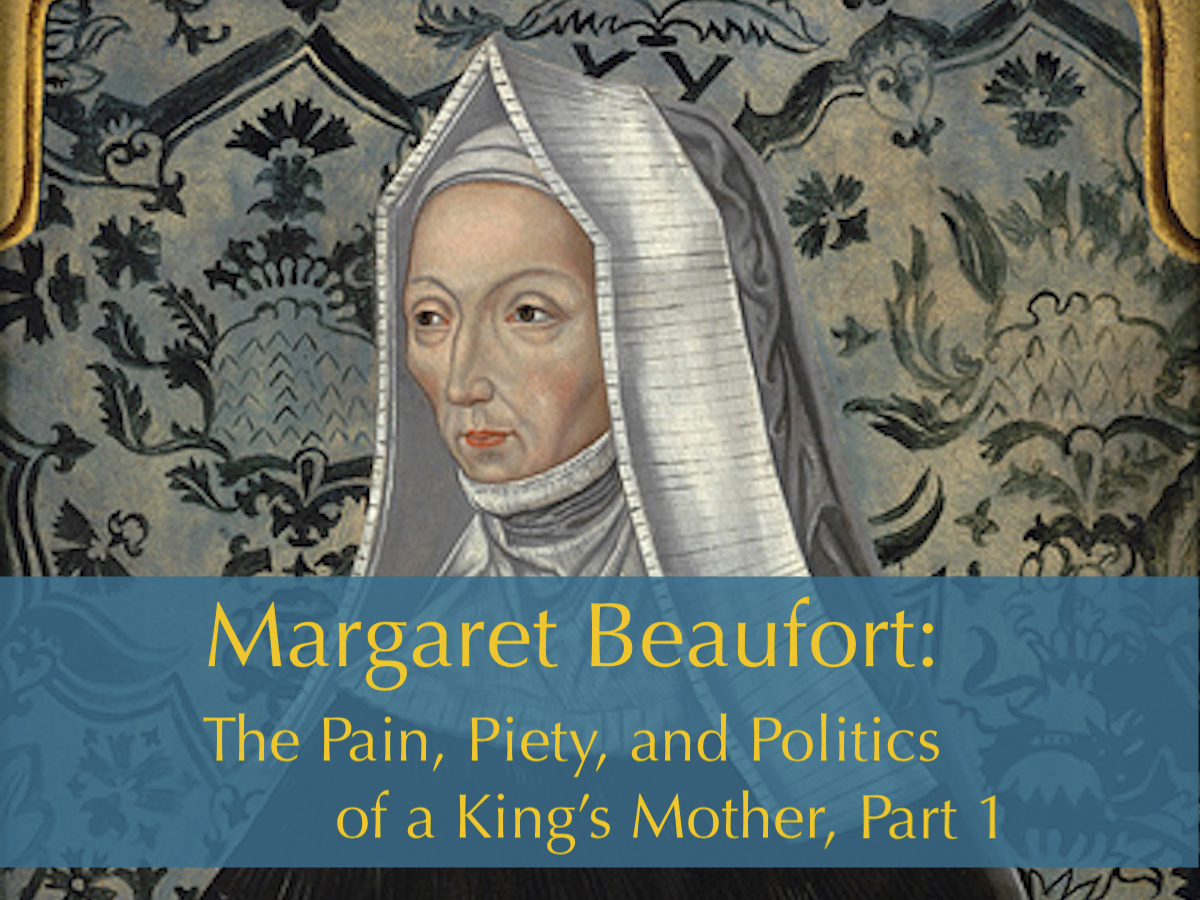 Born in an age where women had little power of their own, Margaret Beaufort had more going against her than just her gender. The country of England in the medieval years of the 1400s was in turmoil, and her family was in disgrace. Yet, within her lifetime, she saw both a son and a grandson crowned king of England. So many works, especially those made for popular consumption, focus on Margaret’s years after her son Henry is born, following his rise to power as King Henry VII of England. In this three-part series, I will show that the most important events to shape Margaret’s character and life came before and just after Henry’s birth. These events made Margaret into the strong, stubborn, and determined woman she would have to be in order to see her son on the throne of England. How did she bring her once tainted family to sovereignty? It was through a combination of pain, piety, and politics.

When Margaret Beaufort was born, England had been embroiled in war in one way or another for what seemed like centuries on end. The Hundred Years War with France had ended with England’s Henry V victorious, but he died shortly after, leaving his very young son as heir to the throne. Henry VI of Lancaster grew to be a very ineffective and weak king, and his crown was under threat of being usurped by his York cousins, who also had a claim to the throne. This conflict started what became known as the War of the Roses.

Margaret was born on May 31, 1443, while her father, John Beaufort, Duke of Somerset, was on a campaign in France. While there, he didn’t accomplish very much and allowed his men to run rampant, plundering French towns. He also misappropriated funds from the Crown, using them for his own means. When he returned to England, several months after his daughter was born, it was in disgrace. He was accused of treason, and his career was destroyed. He left London in shame, and it’s thought he committed suicide soon afterward.

Margaret was left with no father to protect her at a time when women were vulnerable and only had what protection the men of their families could give them. She had no father to advocate for her. And, indeed, her father made her life more difficult with his disgrace. King Henry VI now had lukewarm feelings toward the Beaufort family. She would have grown up knowing not only his political disgrace but his mortal one. Suicide was a grave sin, and though there is no evidence that Margaret was as much of a religious fanatic as she is sometimes portrayed in film and literature, she was a pious woman. When she was older, she prayed for his soul. She must have carried the stain of his sin with her through her life.

Nevertheless, with Somerset’s death, Margaret was left as his sole heir. She was the richest woman in England, even at one year of age. This made her a lucrative pawn for King Henry.

Margaret’s family, though, as historian Alison Weir comments, “tainted with bastardy,” could trace their lineage to Edward III. Margaret’s grandfather, John of Gaunt, was a son of Edward III and had a legitimate claim to the throne. Four of his children, including Margaret’s father, John Beaufort, were born out of wedlock. Since John of Gaunt eventually married their mother, however, and Richard II legitimized the children. Their claim to the throne was stained, however, and Henry IV even added a qualification (though it could not overturn Richard II’s statute) that though they were legitimate, they could never sit on the throne. This meant that Margaret did indeed have a claim to the throne, though a tarnished one. This coupled with her inheritance meant she would make a very lucrative potential wife for an up-and-coming nobleman. This was a political angle Margaret would use to her advantage throughout her life, as it was one of the only pieces of true power she held. Yet it was also a source of pain for her since she would have to face questions about her family’s legitimacy often as well.

After the death of Margaret’s father when she was just an infant, King Henry granted William de la Pole, the Earl of Suffolk, with her wardship. Suffolk arranged for her to be married to his son, John, and a ceremony was performed in 1450 when Margaret was only five and her groom was six. While Suffolk’s position with the king was advantageous for Margaret, that was about the only thing she would gain from this union. Suffolk was descended from wool merchants and did not have a strong legacy or any royal blood. Margaret was being used, as many women were at the time, not only as a political pawn to raise the status of Suffolk’s son but to give him a rich inheritance as well.

In what would become a pattern in Margaret’s life, however, things didn’t work out as planned. Suffolk was extremely unpopular with the English, being accused of corruption and of manipulating the crown for his own gain. At the beginning of 1450, Parliament impeached Suffolk, which may have spurred the marriage between his son and Margaret for his own security. There was great pressure on the king to punish him. In fact, people accused Suffolk of having plans to take the throne for his son. Suffolk was exiled from England and was murdered shortly after he left. Margaret was only seven years old, and her marriage to John de la Pole, Suffolk’s son, had been legitimized by the pope. In name only, she was married.

What would happen to young Margaret now that she was married to an enemy of the crown? Find out next week in part two of the series!