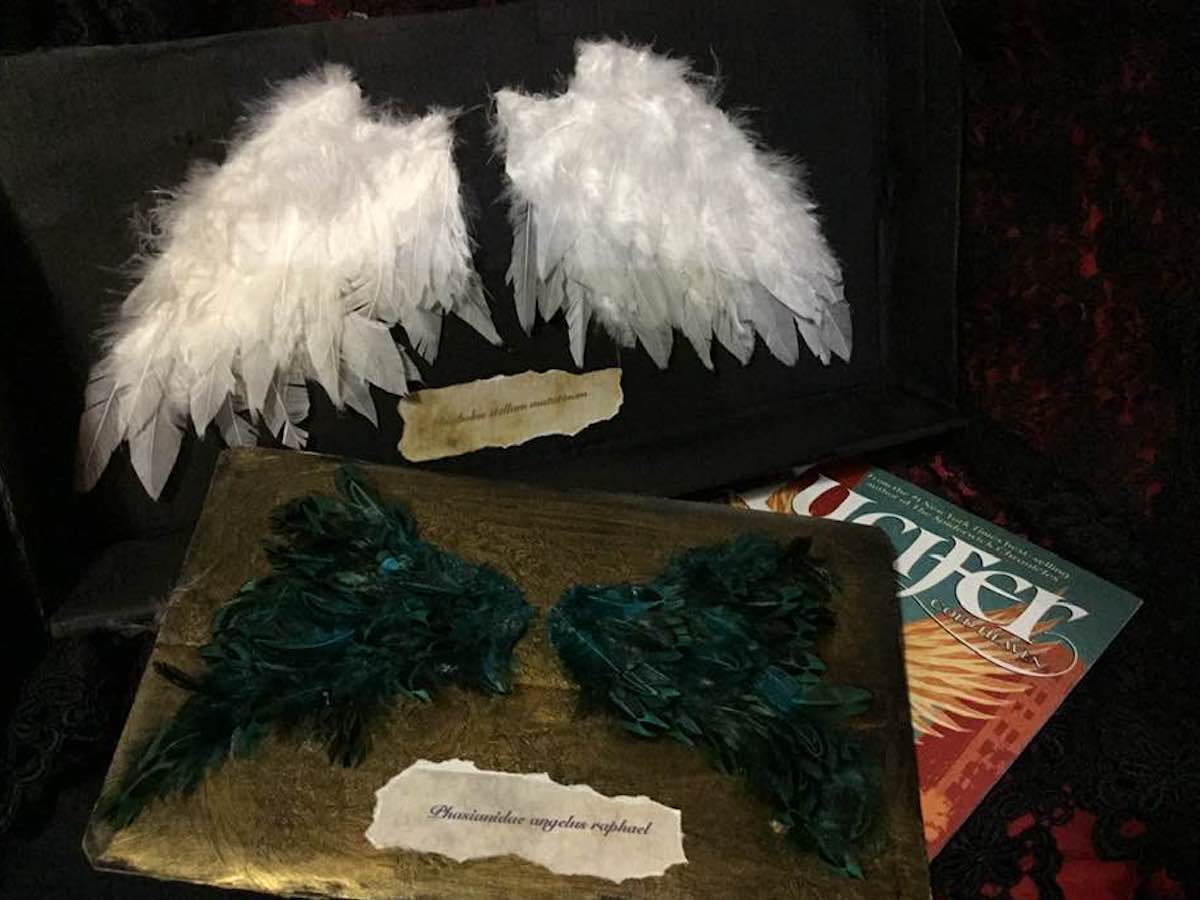 When February and spring come around, many people love giving gifts that sway to the more “fluffy” and cuddly side of things. This doesn’t mean these things have to be boring.

Those who’ve followed some of my DIYs in the past will know I have a slightly macabre sense of humor and love eerie crafts, such as my Fairy Skeleton Specimen shadowboxes.

For this craft, just in time for Valentine’s Day or spring frolicking, I’m collecting some more feathery specimens for lovers of fantasy and natural history alike: angel wings inspired by the Netflix series Lucifer and its graphic novel counterparts from the Sandman universe.

Lucifer is an ideal show for this craft because we learn through the show (and the Neil Gaiman series from which it’s derived) that not all wings are the same. Also, the show played fast and loose with the concept of whether or not angel wings will and can grow back if they get cut off once or twice… or several times.

Crafters who made the wings from my Plague Doctor Staff DIY will already have a jumpstart on these angel wings. Much of the steps are similar.

For the basic steps, we’ll use Lucifer Morningstar’s wings, since he is the main “wingman” of the story.

First, cut your wing shape out of cardboard, and use it as a template to trace a second identical wing. This makes your base. I made each wing about 5″ long for these examples.

Next, divide the feathers you have by size, working with the largest first. If all the feathers are the same size, place some aside to cut the ends off about half of them to make smaller feathers. If you need to, you can trim the feathers into the shape you want, but I recommend doing this outside.

Do this as many times as it takes to cover the entire wing. Use larger feathers for the bottom two or three layers, and gradually working with smaller and smaller feathers until you reach the top.

Trim off any feathers ends sticking out at the top. 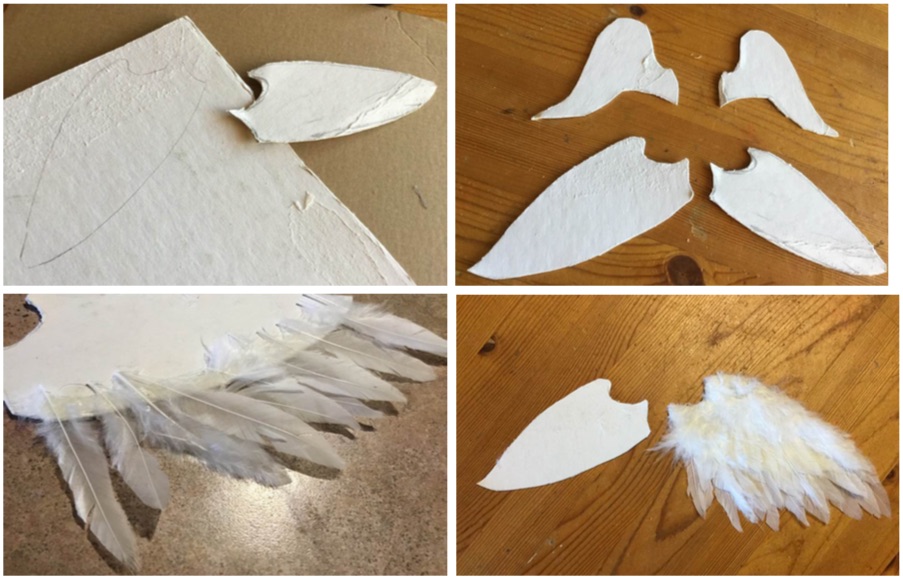 When all the layers are added, trim a couple of feathers’ softer vanes off the center spine of the feather. (This middle spine is called a “rachis,” for those taking notes at home.) Use these loose veins to glue a soft, finished border along part of the top edge of the feathers. This will (not can) get a little messy, as these tend to blow around easily. If you want to avoid too much mess, use some poly fiberfill or some cotton for the top edges. It only takes a small amount.

Now the wings are finished and can be mounted on the base of a shadowbox or just a flat piece of cardboard, wood, or glass for display. Whatever you think looks good. I made some goofy paper “scientific nameplates” using some bird nomenclature and half-baked Latin translations. (Lucifer’s wings I marked as Diabolus stellum matutinam.) Tear around the edges of the paper for an antique look.

Once you have figured out the basic wing idea, make some variant designs based on the different angels. Amendiel’s wings have a similar shape as Lucifer’s but are dark grey in color. Michael’s are a grey/black, but his right wing is messed up quite a bit, as he has been in a few scrapes. There are also feather type variants that can be used. Remiel’s wings have a more hawk-like bird of prey pattern, and Rafael’s wings (from the graphic novels) are blatantly based on peacock feathers.

There are plenty of angels we haven’t seen yet (or may never see) on the show, so use your imagination.

These can be good accompaniments to help make those more traditional Valentine’s candy and flower gifts a little cooler, or just on their own for Lucifans any time of year.

Of course, not everyone may take kindly to having a disembodied pair of celestial wings, but we can’t please everyone. Thank goodness these, like the ones featured in the first season of the Lucifer series, are fakes.

Share ‘Star Wars’ Memories and Make New Ones with #MyStarWars