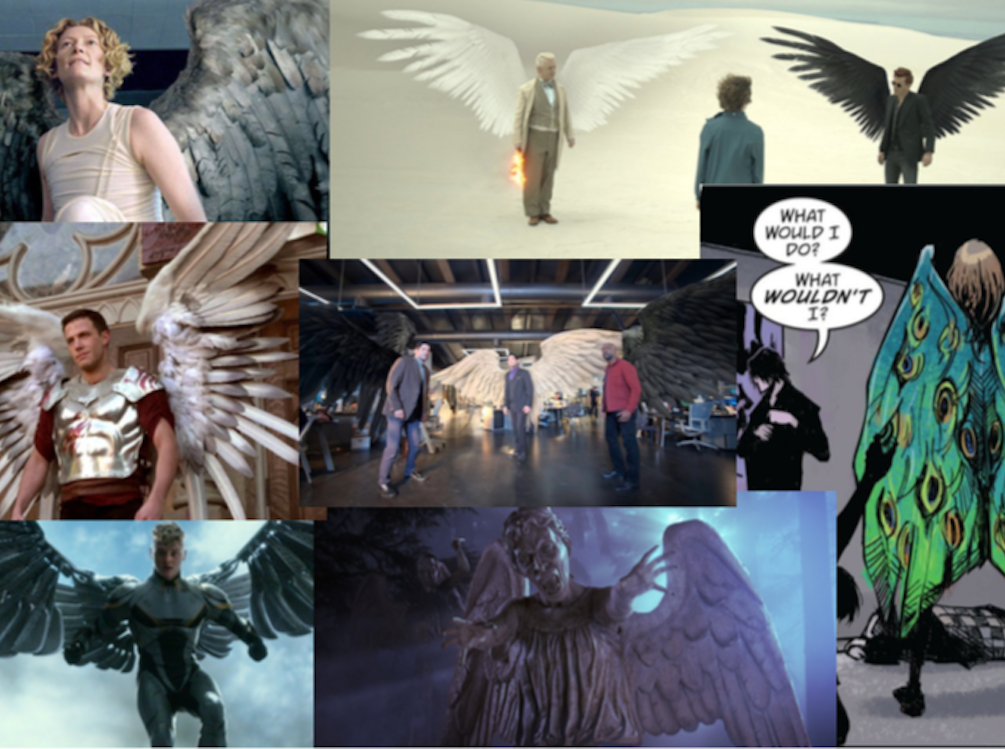 Teacher says, “Every time a bell rings, an angel gets his wings.”
— Zuzu Bailey

It’s the holiday season, and no matter what you celebrate (or don’t celebrate), it is hard not to see the images of vast, winged angels from treetop decorations to porch lights.

Also, when you think about angels, it is nearly impossible to envision them without seeing their big, vast, avian wings that are often a prominent focus of angels in pop culture.

Thank goodness much of pop culture decided to go more with the “renaissance paintings” look of angels rather than some of the traditional Biblical descriptions, where there are at least nine levels of these celestial beings. Can you imagine Supernatural‘s Castiel with eyes all over his body, four faces of various animals, or possibly shaped like a big snake, according to some? (Actually that last one would be cool.)

Instead, here are some fun and geeky facts about pop culture angels’ most prominent features—their wings:

1. Clarence’s angel wing quest is a defining plot point of the holiday classic It’s a Wonderful Life, but you never actually get to see his wings. It is only mentioned at the end when he writes in a note to George Bailey, “thanks for the wings.” Additionally, Clarence himself isn’t even seen in the movie for the first half-hour.

2. In the long-running series Supernatural, which ended this year, angel wings are complicated, to say the least. There is even a storyline in which many are willing to let Lucifer take over as King of Heaven to restore their lost wings. These wings are mostly seen as dark shadow forms when they want to display them. When an angel is stabbed and killed by an angel blade, an image of their wings are burned into the ground around their dead “vessel.” According to Supernatural fandom’s wiki, 15 different angels have shown their wings including, of course, Castiel.

Here’s a look as his at the evolution of Cass’s wings:

3. In the X-Men comics, mutant (and son of wealthy industrialist) Warren Worthington III was known as “Angel” because his mutant power resulted in large, white-feathered wings growing from his back. The movie version showed his father trying to “cure” his son of this mutation. In the comics, Angel evolves into this darker form, Archangel, where his wings aren’t feathered but metal.

4. In the mini-series based on the Neil Gaiman and Terry Pratchett comic novel Good Omens, both angels and demons have wings, as displayed in the celestial bromance of angel Aziraphale and demon Crowley. Although the series shows angel wings as white and demon wings as black, in the book, Gaiman and Pratchett wrote: “Contrary to popular belief, the wings of demons are the same as the wings of angels, although they’re often better groomed.”

5. The comic series Lucifer, set in the Sandman universe of Neil Gaimen, has many differences between the television series and the comic. So far, however, the depiction of angel wings is trying to stay close to the source material. Lucifer Morningstar’s own wings are snowy white (except during a bout in Season 4 where leather devil wings take over), but each angel’s wings resemble those of a different color or bird. This includes Remiel’s wings, which are falcon-like (as seen in the show), and Raphael’s wings in the comic, which are those of a proud peacock.

Lucifer’s wings are seen so much they are practically their own character, and he doesn’t always get along with will them, as seen in this compilation of “wing scenes” from just the third season:

6. Kevin Smith’s movie Dogma gives his own depiction of all things Biblical. Two banished angels, Loki and Bartleby (Matt Damon and Ben Affleck), found a “loophole” back into Heaven (becoming human). In order to do so, they have to cut off their wings, and it is a gruesome ordeal. Bartleby’s get shot off by one of Smith’s recurring movie characters, Jay, and Loki cuts off his own wings.

7. There are several angel characters in video games, but the coolest wings are in the dark series Diablo. The wings of angel Tyrael are blue, glowing rays of wing-like light rather than feathers. The Collector’s Edition of the Diablo III PC game even allowed players to use these wings themselves as a vanity option for their wardrobe.

8. One set of angel wings no one wants to see are those of the villainous Weeping Angels from Doctor Who. These angelic villains “mercifully” kill their victims by dropping them in the past and letting them live out their full lives. Their wings, however, are pretty useless, as they can only “move” when you aren’t looking at them. The angel statues are just a form they have taken over. They can also take other statue forms, including that of the Statue of Liberty or cherubs.

On Christmas Eve 2009, a special “Ghost Story for Christmas” Doctor Who and Torchwood crossover mini-episode featured the Weeping Angels and was narrated by Captain Jack Harkness:

9. One of the most popular characters to come from Todd McFarlane’s Image series Spawn was the bounty hunter angel, Angela. Angela, however, was created by Neil Gaiman who later took over the rights for the character, and she became part of the Marvel Comics universe (including helping out the Guardians of the Galaxy). Despite having a bevy of powers from super-strength to combat skills… Angela lacks wings. This is because she isn’t an “angel” at all, but rather an Asgardian who was kidnapped by the Queen of Heven as a young child.

10. Another comic-based movie that revealed angels becoming human when their wings are removed was the 2005 reimagining of the Hellblazer comic, Constantine, starring Keanu Reeves. In this story, the treacherous “half-breed” angel Gabriel, played by Tilda Swinton, has his wings burnt off by Lucifer and is therefore condemned to be part of the human race he hates. After more than 15 years, we may know what happened, as several rumors have been circulating this year that this cult-classic may finally get a sequel.

When or if this actually happens. “Heaven only knows.”

This post is dedicated to my father, Charlie, who I’m hoping is being fitted with a pair of pin-striped hot rod wings with dual exhaust and turbo. Love you, Dad.

It's A Despicable Me Giveaway!