Hellions #1 poses an intriguing premise. What does paradise offer the damaged, demented, and dysfunctional? The Quiet Councils goal was to offer all mutants a safe place to live in peace but what about those who as Mr. Sinister so eloquently opines:

“They know quiet only in carnage, peace only in violence, tranquility only in insanity.”

How does paradise handle those who refuse to conform to life on Krakoa? Hellions #1 forces an examination of a segment of Krakoa society that has to this point remained unexplored – the mutants who are outcasts even among mutants. Don’t make the mistake those of thinking this book is a bunch of scene-setting and exposition. Hellions #1 starts off heavy on the action then sucker punches you with emotion all the while entertaining you with a dark, crisp sense of humor.

Spoiler Warning: If you have not read Hellions #1 There May Be Spoilers Below

Hellions #1: The Story So Far:

The tropical paradise of Krakoa became a mutant sanctuary in Dawn of X 2019 relaunch. The Quiet Council, made up of the likes of Apocalypse, Mr. Sinister, and Magneto working in concert with Charles Xavier, Jean Grey, and Storm, strives to build a society within what is now recognized as the sovereign homeland of all mutants. Leveraging the ecosystem of Krakoa’s miraculous potential to benefit both humanity and mutants, Mutant kind has achieved a level of global economic power. The building of a new nation is fraught with challenges both internal and external, those challenges grow exponentially when your population is made up of the world’s most powerful individuals.

Hellions #1 sets up the newest version of the team with characters that share some history with previous incarnations of the Hellions. Even more interesting to note is the role Mr. Sinister plays in both the creation of this new team and in his historic ties to certain members of the team. Fans who’ve read Hickman’s Powers of X series will be on the lookout for twists that might lead to the foreshadowed future we glimpsed.

Hellions #1 is a easy  jump on for new readers. Wells and team carefully introduce us to the new Hellions – Scalphunter, Wild Child, Empath, Nanny, Orphanmaker, Psylocke, and Havoc – giving each character an action-filled yet, solid introduction. While some of the team members are less stable than others as a whole this group could be a Suicide Squad-level of fun and mayhem.

In Hellions #1, writer Zeb Wells deftly establishes the tone of this series and is careful to ensure we get an understanding of each team member; this is key as even casual X-Men fans may not recall or know some of these characters. Hellions #1 pacing is steady and transitions from high action to high emotion smoothly. I’m particularly amused by Wells’ treatment of Sinister who lives up to his name. Wells blends a sense of menace with comedic dark humor that evokes phantoms of Jack’s Nicholson’s turn as Joker to pull off a disturbing effect I can only describe as volatile sanity. Sinister’s conversations with Kwannon are downright unsettling.

The talent of Stephen Segovia & David Curiel gives visual voice to the atmosphere and underlines the discomfort of not only each non-conforming mutant but of the Quiet Council as well. The facial expressions and body language as they face each mutant in turn tell us this is a situation they’ve been clearly be hoping to avoid. Curiel & Segovia’s artwork compliments the style of Leinil Francis Yu that distinguishes the core X-Men series creating a cohesive story look.

Hellions #1 is probably the best entry into this new era of X-Men titles thus far. I’ll stick with Marvel’s recommended 12+ age range for this issue though I’d caution that the final scenes are fairly bloody and might allude some graphic content coming in future issues. Readers who are sensitive to violence are likely to be uncomfortable with this series. That said, longtime X-Men fans are likely to enjoy Hellions #1. This is setting up for what could be the best Hellions run I’ve read yet.

Pro Tip: Read the white pages full of text that look like they aren’t important. There’s a lot of interesting info in them and it adds to your overall understanding of the story. 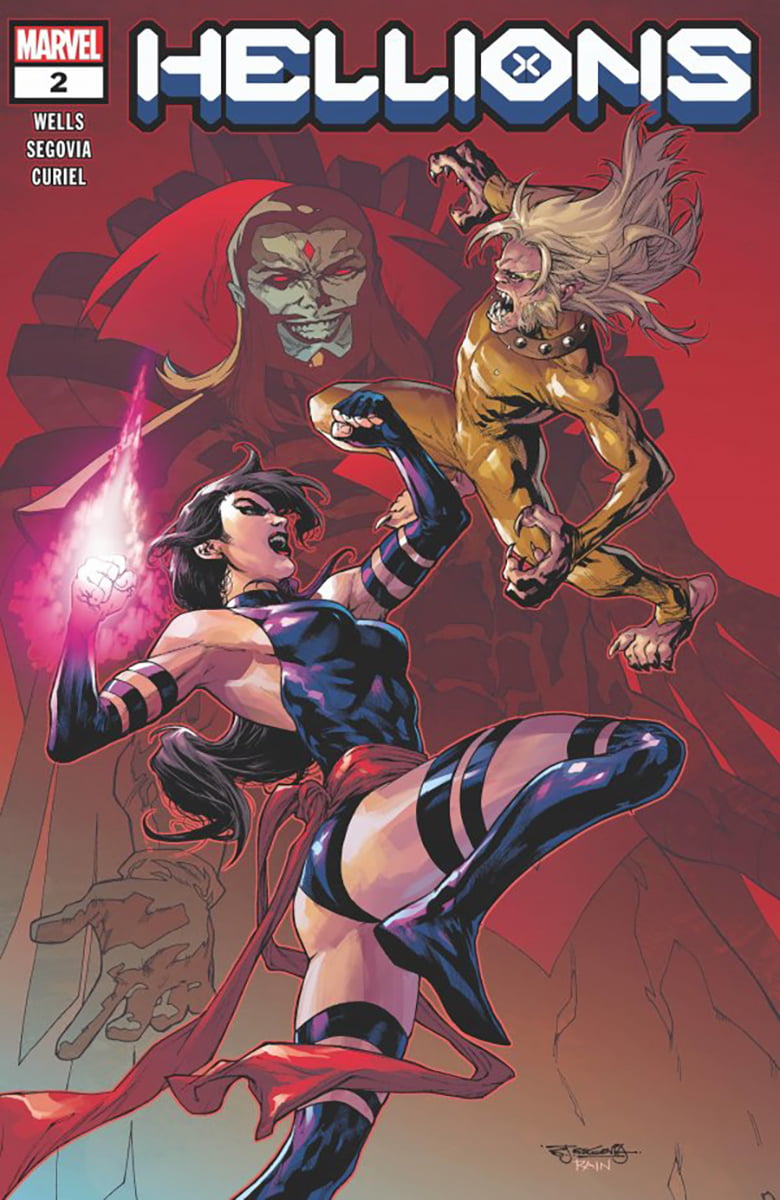