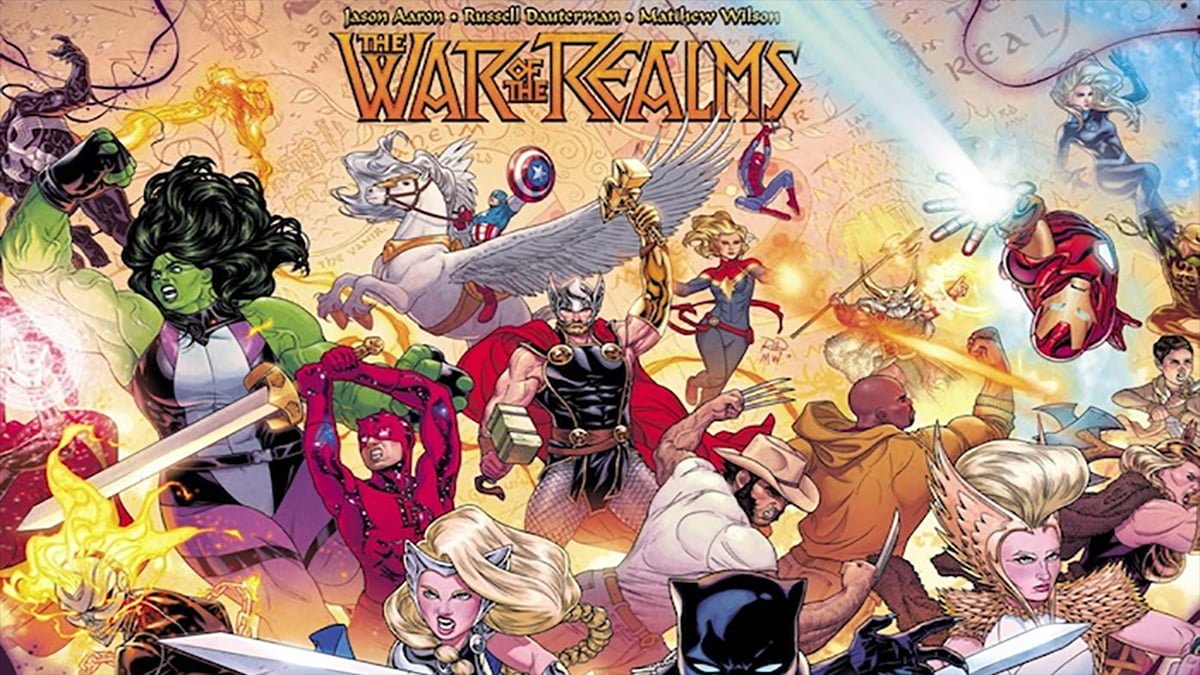 The War of The Realms #1

The War of The Realms #1 released on April 3rd, and if you haven’t grabbed a copy yet, you might want to hit up your local comic book store and do so. While you’re at it you might want to make certain you’re up to date on Avengers (2018 – Present), Asgardians of the Galaxy, and Thor (2018-Present) because while this crossover will have tie-ins to approximately eleven other titles, events that occur in those three series lead up to where we are at the outset of The War of The Realms #1. Specifically, the following issues will help get you up to speed on events that directly relate to The War of The Realms:

The War of The Realms #1 begins one of Marvel’s most ambitious crossover events. This incredible six-issue event focuses on the evil Malekith, the King of the Dark Elves, and his attempt to destroy the last of the ten realms, Midgard, home to humans and most recently several refugee immortals.

For many readers, even some Marvel fans, Malekith is one of the lesser known villains in the MCU (Marvel Comics Universe), but that’s one of many reasons that he’s exactly the right protagonist for an event this large. There’s something about the very fact that he’s not one of your high-profile bad guys that makes this massive assault on our world seem so out of the blue. Still, the truth is that Malekith laid the groundwork for this battle long ago, even before Jane Foster’s tenure as Thor. Marvel has an excellent write up on Malekith’s machinations.

Spoiler Warning: If you have not read The War of The Realms #1 There May Be Spoilers Below 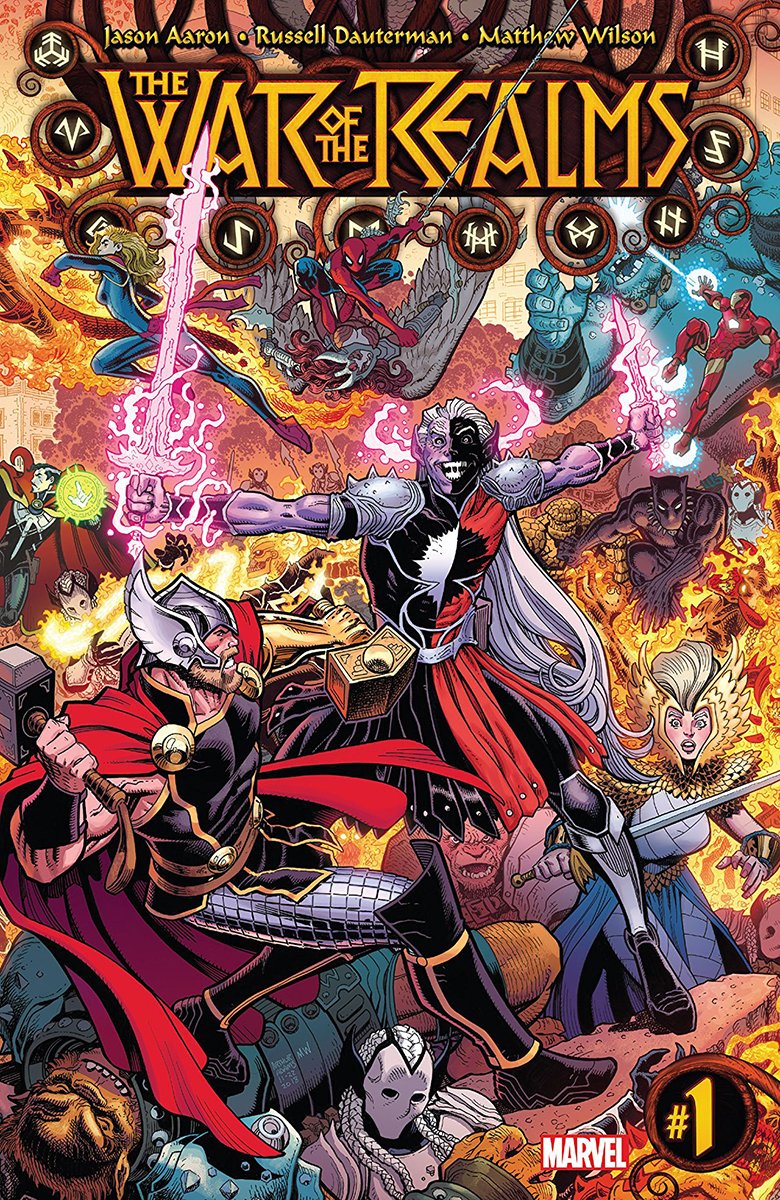 What is The War of The Realms?

Asgard, Alfheim, Heven, Jotunheim, Muspelheim, Niffleheim, Nidavellir, Svartalfheim, and Vanaheim have all fallen to Malekith and his armies. With each realm conquered, the evil dark elf tyrant has expanded his power. Now there is a single realm left to conquer – Midgard. Malekith brings to bear all the worst monsters from The Realms with the sole purpose to raze Midgard and complete his conquest of all Ten Realms.

The War of The Realms #1 Cover

The War of The Realms #1 cover is a sight to behold. Arthur Adams and Matthew Wilson bring the massive scale of this battle screaming to life in a cover exploding with heroes and monsters alike. This intricate wraparound cover could double as a Marvel version of the ISpy game with the sheer volume of detail packed into it. Malekith grins insanely from the center as the world burns around him. Truly, this is an awesome cover. 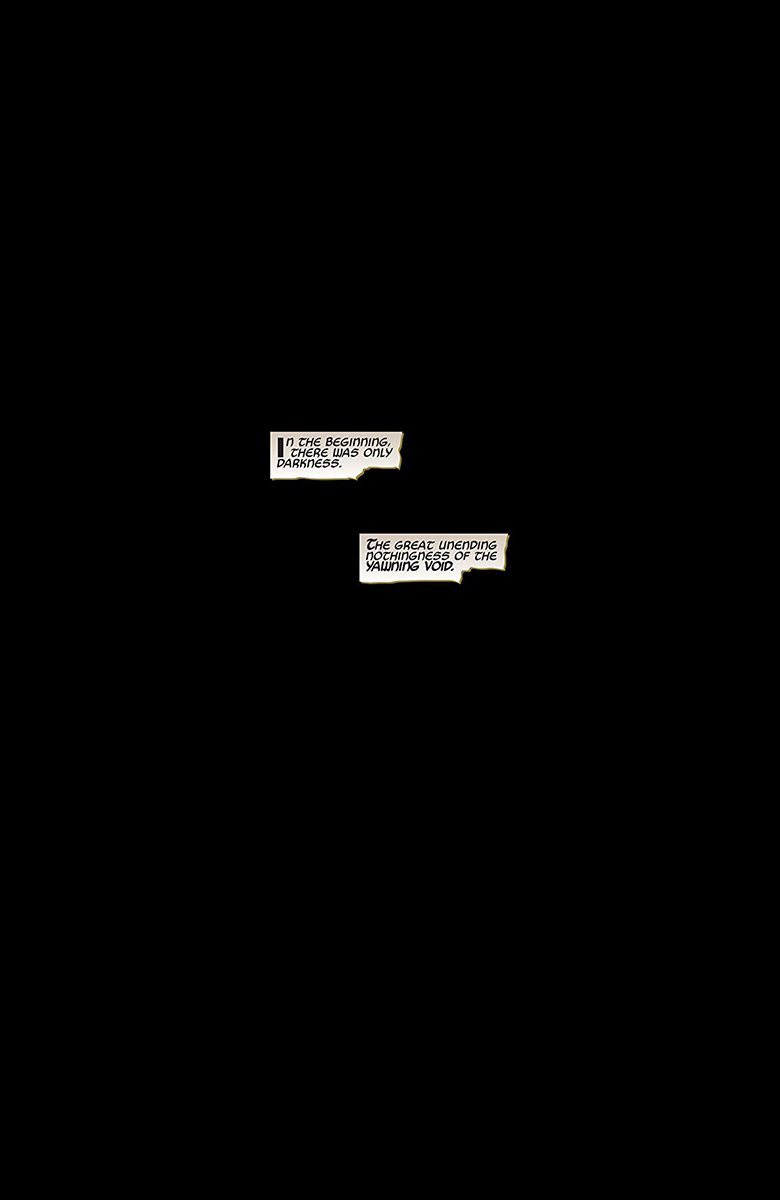 The War of The Realms #1 opens with darkness, and the unexpected death of Odin. After Mangog’s destruction of Asgard, the gods and goddesses have left. Only one remains. Odin sits brooding, exhausted from his battle with Mangog to the point that he can’t even begin repairing the damage. Knowing that that Odin would be at his weakest, Malekith has dispatched Dark Elf assassins to end the King of the Gods. So, this issue begins with an ominous and gruesome demise that portends Malekith’s intentions and the fate of Midgard.

The last time Thor saw Angela, he admonished her not to trust Loki. Unfortunately, preoccupied with Malekith but frustrated with the destruction of the Bifrost, and still angry at his father Thor fails to heed his own advice. I realize that when a broken and bloody Loki crashes unexpectedly to the deck of your boat, it may be hard to focus. I understand that a pack of Dark Elf assassins might be a bit distracting but maybe just maybe before you rush off to battle, forcing your dying half-brother to transport you; it might be a good idea to take five minutes and pay attention to your dog. You might have saved yourself a one-way trip. 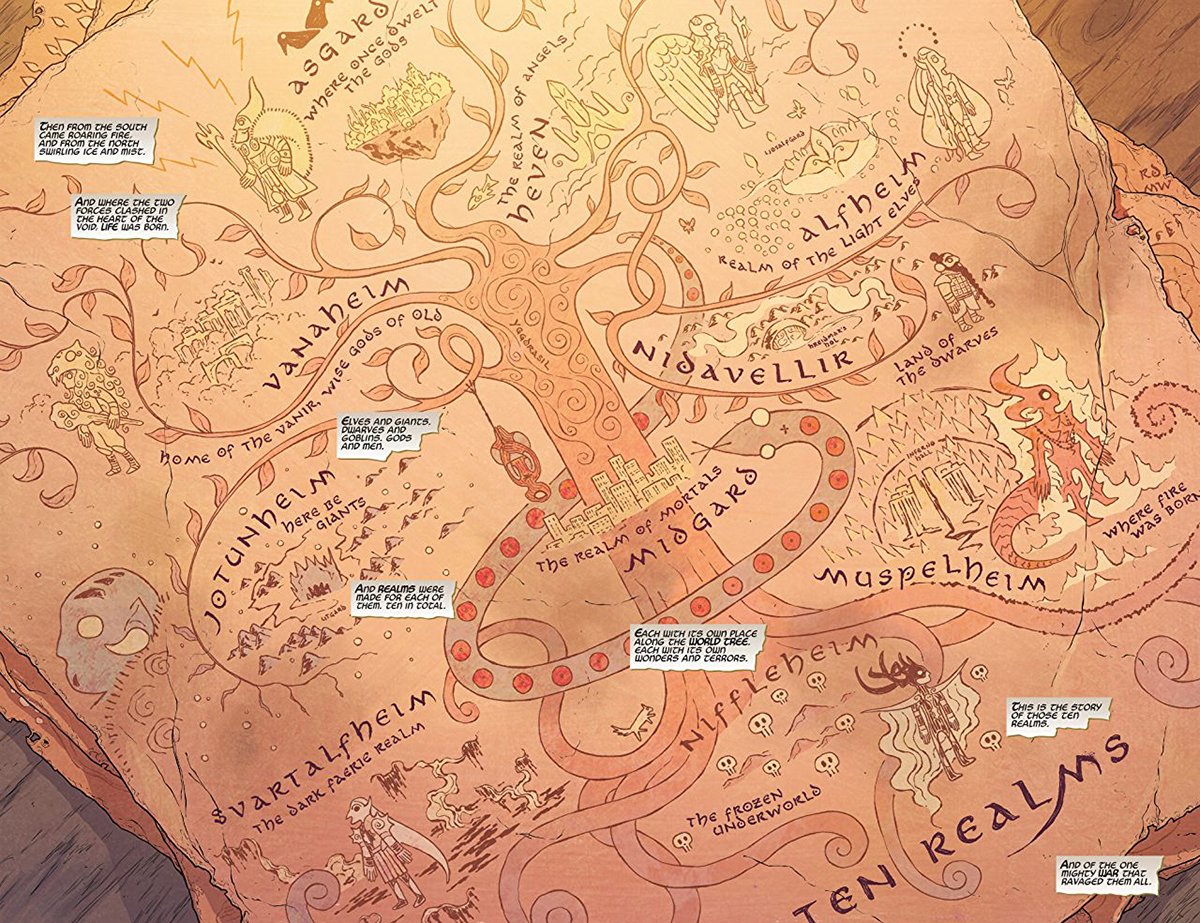 The Man of Spiders

While Thor is facing down an endless supply of Frost Giants, an unsuspecting Spider-Man is mulling over his unusually good day. Any Spider-Man fan can tell you that alone is a sign of trouble. Spidey gets that all too familiar tingle but this time, it’s more like an air raid siren. His instincts lead him to the aid of the Frejya, the All-Mother, who is facing down her own pack of Dark Elf assassins.

Spidey’s not the only one to sense something isn’t right. Doctor Strange, Daredevil, Wolverine, and Punisher each get that ominous feeling that something nasty is about to happen. And then it does.

The War of The Realms explodes in a visually stunning two-page splash page where all hell breaks loose right in the middle of downtown New York. Frost Giants lumber through the streets; Dark Elves brutally slaughter anyone they meet, Trolls trash vehicles taunting terrified humans, Heven’s War Angels rip helicopters and planes apart in the air. 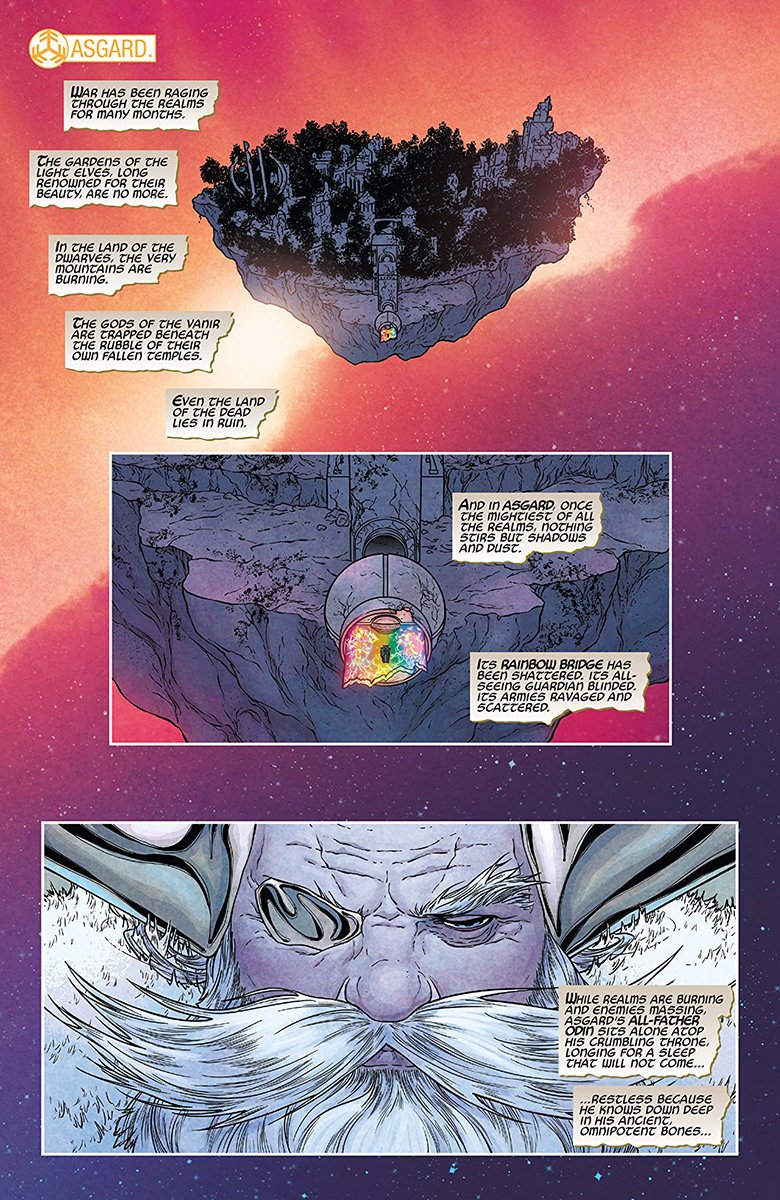 The Gang’s (Almost) All Here

There is no mistaking the tremendous scope and scale of The War of The Realms. The sheer number of characters in this issue alone promises that this event that Jason Aaron has been building up to is going to be truly epic. The War of The Realms #1 brings all the big kids out to play including New York’s hometown heroes Daredevil, Punisher, She-Hulk, Captain America, Doctor Strange, and of course, “The Man of Spiders” (Spider-Man). Add to that all the displaced Asgardians, the Avengers, The self-proclaimed “Lords of Midgard,” as well as an assortment of Dark Elves, Frost Giants, Trolls, and other nasty beasties.

Then Loki shows up. It seems these days no monumental event is truly complete until Loki arrives. Loki is forever playing all sides against each other because, in the end, he is only ever on one side – his own. Naturally, with Loki in the same room as his mother and father, both things are going to get a bit weird. I mean, he did recently stab his mother in the back – quite literally – and she’s not forgotten nor forgiven. There’s a lot of familial interplay in this issue, but the utterly stunning move made by Loki toward the end of this issue is something I just can bring myself to spoil. Trust me; you want to see this. 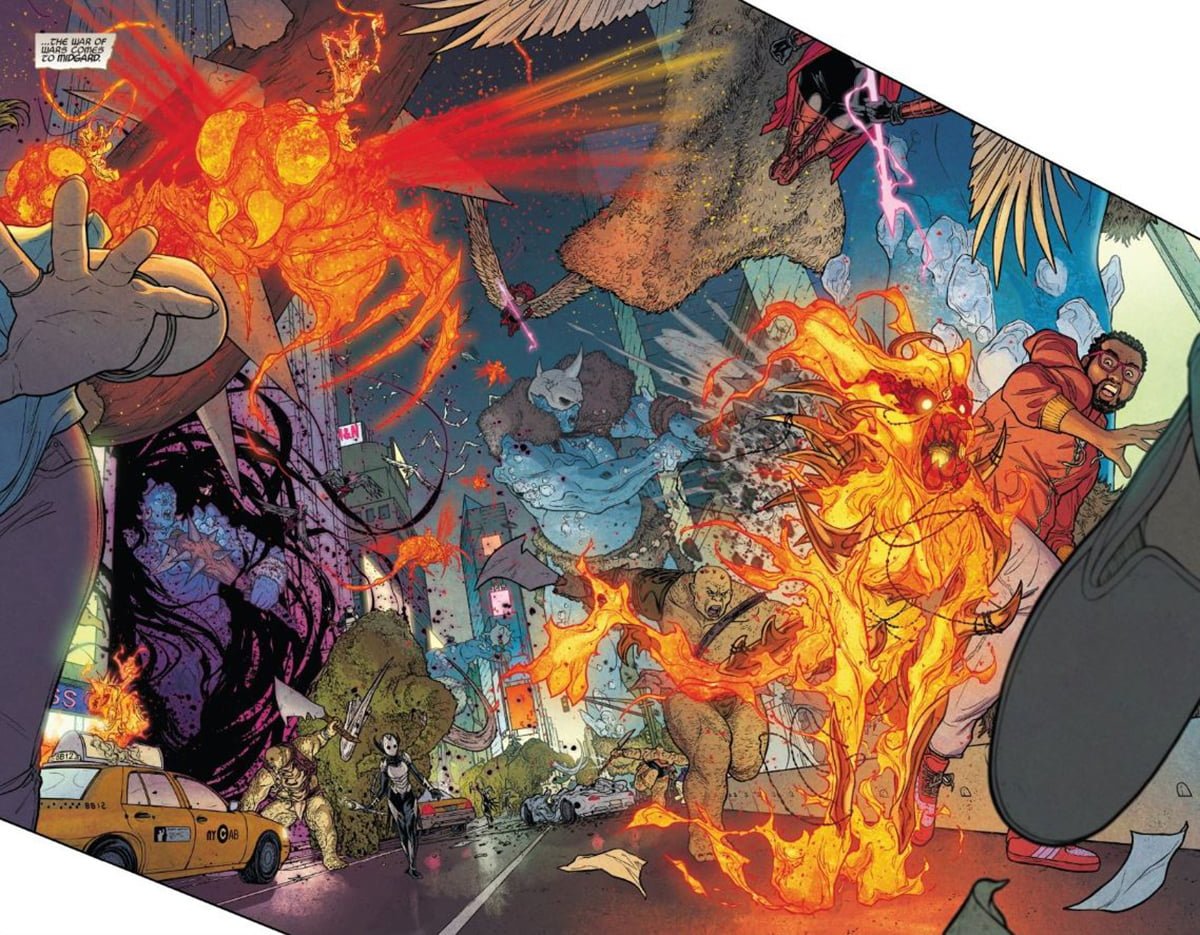 The War of The Realms #1 establishes the weight of this impending apocalypse immediately. The ominous narration against utter blackness is heightened by the strength of Sabino’s lettering. The two-page splash of the World Tree takes on fantasy quality worth of Lord of the Rings due to the elegant blending of Dauterman’s art, Wilson’s graduated earth tones, and Sabino’s carefully crafted narrative font. From the start, there’s a tension building steadily through the issue, and it explodes satisfyingly into the kinetic energy that is New York City invaded by living breathing nightmares under the command of a viciously malevolent conqueror.

The final splash is a full-page masterwork of Thor venting his rage, frustration, and righteous fury. Wilson’s cool blue and white tones send the chill of the air right off the page as Dauterman’s exquisite linework dares you to look away from the primal ferocity that is a very angry God of Thunder. Sabino brings it all home in a font echoes forth with Thor’s battle cry punctuating this entire issue with the exclamation point it deserves. 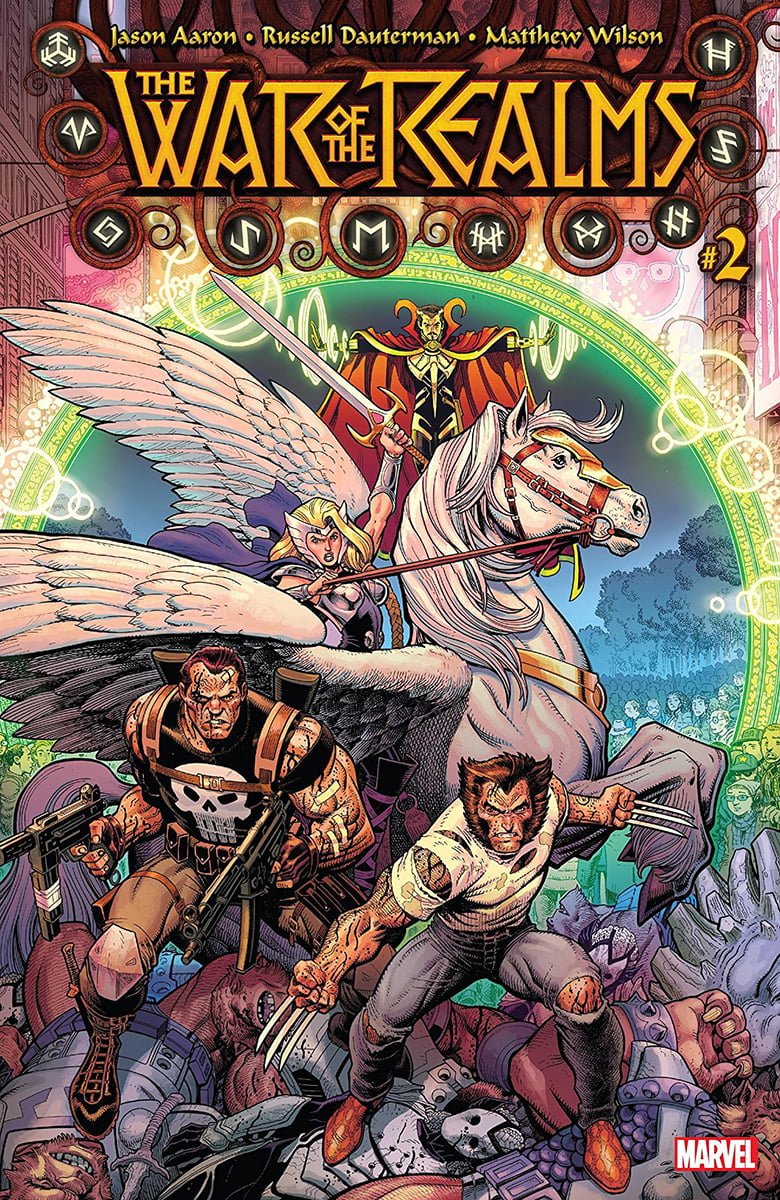 Doctor of the Fat Geek: Part 2

‘Batgirl #45’: A Sea Change For DC on LGBT Weddings