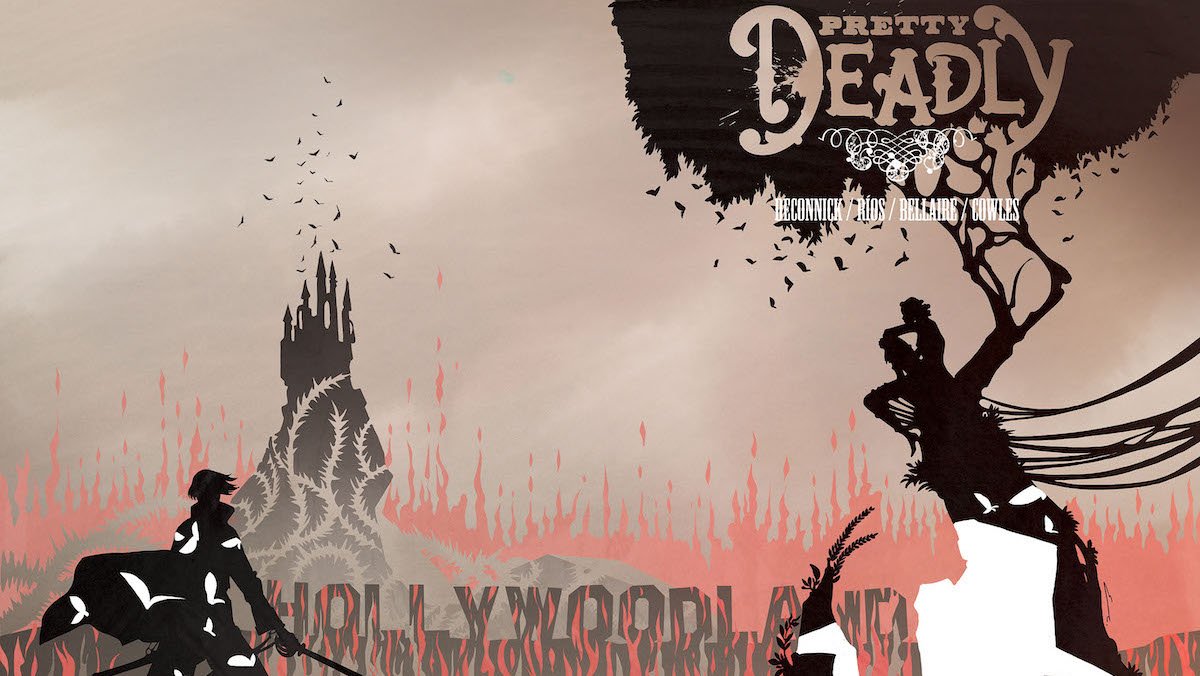 Pretty Deadly: The Rat, written by Kelly Sue DeConnick, with art by Emma Rios, and colors by Jordie Bellaire and lettering by Clayton Cowles, is one of those stories that forces the reader to take their time to soak up all the layers of meaning.

The surface plot concerns the mysterious death of a screenwriter, a young Black woman who’s obsessed with stories and came to Hollywood to make certain those stories were heard. Her uncle, known as the Conjure-Man, is a fake medium with real connections to the supernatural world, and he summons Ginny, known as the Reaper of Vengeance, to help him unravel what happened to his niece.

This is about stories, how they grab hold and obsess us, how they won’t let go, and their connection with life and death, as this real-world tale is a walk through the world of the Reapers and the Gardener who tends the garden of death and life, and how those cycles interacts with happenings in the real world.

The Art of Pretty Deadly: The Rat

Art is story, as they say, and Rios’ art almost reaches from the page, an inky black hand of obsession, to pull the reader in.

There’s a similarity in the art choices to the “Deathly Hallows” animated segment in the last Harry Potter movie, as the various Reapers manifest in shadowy, semi-human ways. The art shows where life and death meet, and what’s on either side.

Take the opening pages of Pretty Deadly: The Rat #1. The first few take place in the garden, with a mix of living and dead skeletal creatures, and the colors of autumn, oranges and black, mixed it with a bright shade of blue for the Blue Jays. The story then shifts on page six to a full-page spread and a bleak landscape: the white Hollywood sign, with rain falling in the darkness of the hills and the road below it. Even the car is in shades of gray and black. The narration reads:

Three days of this. Ground is full. Folks prayed for rain in the desert and now we’re drowning in it. That’s how we are here. Never happy with some when we could have too much. Welcome to Los Angeles.

The Story of Pretty Deadly: The Rat

As I said, this story is in layers. Remove any one of them and it wouldn’t work nearly as well. The death of young Clara Fields in the concrete catalyst for the mystery, but her death is about so much more. As the beginning promises, it’s about “never happy with some when we could have too much.”

The character who grounds the story is Frank aka Conjure-Man. He may be a charlatan who likes to tell stories, but he also knows how to summon metaphysical help to uncover the events surrounding his niece’s death. (She is found face-down beneath the Hollywood sign.) This would be a great noir story on its own, without the metaphysical elements, but, down deep, noir stories, especially those about Hollywood are about broken dreams and obsession—see Sunset Boulevard—and adding Ginny the Reaper and the other reapers to the quest for the truth of Clara’s death works perfectly.

The main character’s ghost tells the story in Sunset Boulevard, and so do the metaphysical manifestations in Pretty Deadly: The Rat.

Pretty Deadly: The Rat, is the third volume of the Pretty Deadly series. Conscious of the years between the volumes, the creators have provided an introduction in each issue, adding a quick recap of the past issue’s developments in each subsequent issue. The first introduction reads:

The Ballard was a history. With Death’s Daughter Ginny at her side, Sissy, the child of blood and violence raised on love, defeated Old Death in his own domain and took his place in the long-fallow World Garden.

There, her work has only just begun. Having assumed the mantle of Death herself, Sissy must bring the Garden back to Life… and seek out the errant Reapers, long left scattered, and return them to the fold.

In the mortal realm, Sarah Fields, mother to many, and the woman who pulled Sissy from the river of blood that bore her, has died… but her children, and their connection to the Reapers, live on. Striking out from their birthplace, Sarah’s progeny has found themselves as far-flung as the bloody trenches of France and the arid streets of Hollywoodland…

With Clara Fields being one of these children, the Reapers are not only involved in helping solve her death but also in how she lived her life. The Gardener I mentioned above is the former Sissy, who’s hoping she is doing her job to tend the Garden and bring it back to life, and the fates of the Reapers, Clara, Sissy, and Ginny, who Conjure-Man summons, are all entwined.

Much as the Reapers themselves cast a spell on mortals and even each other, so does this tale do so to the reader. I spent time after reading the last issue thinking about storytellers and how so many stories are, essentially, about life and death, and the stories we tell to enlighten both of these elements.

There are also interviews with the creative team in the back, which speak to the creative process, and they were fascinating to me as a writer. Also included are discussion guides and extra full pages of art.

This is a tale that’s going to be in my head for a long time.

Disclaimer: GeekMom received digital copies of these issues for review.

What Do You “Tell” About Santa?