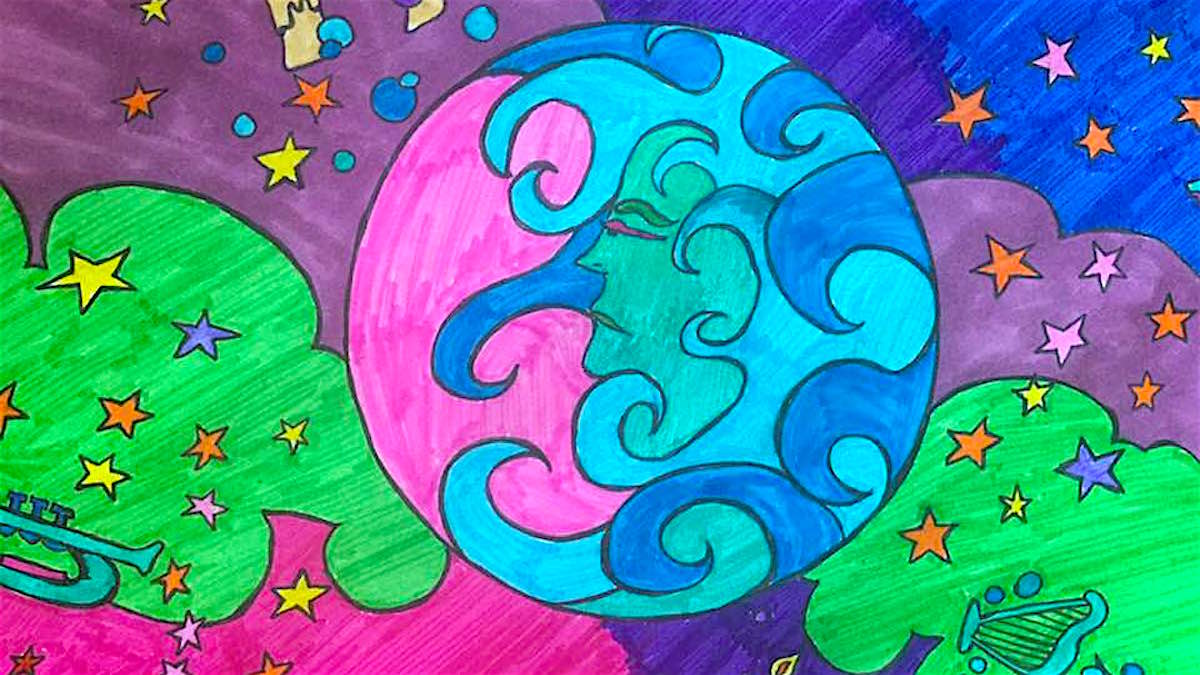 The 1960s was an iconic decade, and Peter Max, according to the biography on his official site, was often referred to by critics as the “artistic equivalent of The Beatles.”

Max was born Peter Max Finkelstein in Berlin, Germany in 1937, and his travels with his parents gave him an appreciation of cultures, music, movies and art, and later. When he was 11 he begin studying painting and colorization with a Viennese Fauve Expressionist, in the new independent state of Israel. He also later gained a love for astronomy, and used elements of space and the cosmos in much of his work. He went to New York City in the 1950s, and studied at the Art Students League. When he became interested in the avant-garde, he moved on the city’s School of Visual Arts.

He opened his first studio in 1962, and begin creating graphic designs and book covers. Max’s art was common in advertising, and he designed everything from concert posters to album covers to art clocks to phone books and more.

He not only incorporated his love of the cosmos, but also the spiritual, “hippie” attitude of the 1960s. His “Be In” Posters inspired the Summer of Love gathering in Central Park in 1967, and he made appearances on several television talk shows from Ed Sullivan to the Tonight Show with Johnny Carson as an artistic icon of the time.

He retreated from the public eye in the early 1970s, to explore more realistic brushstroke painting methods, and much of the paintings from this era also became famous, such as “Umbrella Man” and “Sage with Cane.”

His activism included environmental issues, and he created the design for first “Environmental” themed U.S. stamp in 1974. He also loved America, and created more than 200 “Welcome to America” border murals at several United States entry points on both the Canadian and Mexican borders.

Max is currently 81, and he still lives in New York. His most recent notable commissions were in 2015, where he did the poster for the 30th anniversary for the Rock & Roll Hall of Fame, and portraits for the four hosts of the NBC talent search, The Voice.

In a 2009 interview with Atlanta Journal Constitution, Max was asked if his legacy would be in art or pop culture, and he said he didn’t look at it that way. Instead, he said he is just “wowed” by the universe.

“I’m just glad to do something I love to do,” he said. “I love color, I love painting, I love shapes, I love composition, I love the people around me. I’m adoring it all. My legacy is in the hands of other people.”

Quite a bit happened in 1969 ranging from scientific achievements such as the Apollo 11 moon landing, civil rights events such as the Stonewall uprising, and cultural milestones like Woodstock (Max has even created his own tributes of both the moon landing and Woodstock).

This was also the year Max made the cover of Life Magazine, having made a commercially successful career as an artist.

There were also some geekier pop culture things that were born that year as well: Disneyland’s Haunted Mansion, Scooby Doo, Monty Python, and Sesame Street just for starters. Max’s comic art is perfect for this out-of-the-world era, as he loved space and the “Cosmos,” and once said if he wasn’t an artist he would have been an astronomer.

For this Peter Max “cosmic art” style project, use something that happened or started this year as a subject matter. The Boeing 747 made it’s first flight….John and Yoko got married and gave an interview in bed…”Oliver” won the Academy Award, and the New York Jets won the Super Bowl.

First, find your subject, and draw a simple image representing it. Draw a face or figure, building, flower, rocket ship, or other main image in simple line art.

There may even be someone who passed away that year you want to remember (such as Boris Karloff).

Once you’ve established the main subject, add those details that made Max’s art so vibrant and fun: stars, hearts, rainbow, doves, peace signs, bubbles and planets, or big, bold stylized sunsets and clouds. Use random shapes and textures within your main drawing to make it more funky and fun. A good example of how Max could fill an image with color and shapes is an ad he did for a New York clothing shop “The Different Drummer,” that is now one of his famous images.

Next, use a bold felt tip marker to outline everything, and erase all semblance of pencil if there is any. It should be a good, clean black and white image that almost looks like a detailed coloring page.

The final step is the most fun…the color! Max use water color, acrylic, colored pencils, or makers to make some bright or neon colors. It’s okay to veer from the “real world” expectations. The sky doesn’t have to be blue. Plants don’t have to be green, and hair and skin can be any color you can think up (although many faces and stars in Max’s art were left uncolored).

Solid colors are fine for the details and foreground, and if you want to try something a little harder, blend some colors together:

This is often something seen in the background of Max’s work to give is a little more depth.

To make this a more personal project, find your favorite achievement science, history, sports, or pop culture from the year you were born (GeekMom Lisa was born in 1969) for inspiration instead.

If you want further inspiration from this era, I also recommend checking out is Ron Campbell, a former Disney animator behind several classic animated television shows and The Beatles’ Yellow Submarine, as well as the fantastic works of Corita Kent.

Mostly, make it bold, bright and lively. Max’s work didn’t stand still, he didn’t limit himself to what was easy or expected. He even reminds other of he value of taking risks and not worrying about making things perfect in one of his more notable quotes:

“Don’t worry about mistakes,” he said. “Making things out of mistakes, that’s creativity.”

Introducing the 2015 Summer Immersion Program at Girls Who Code