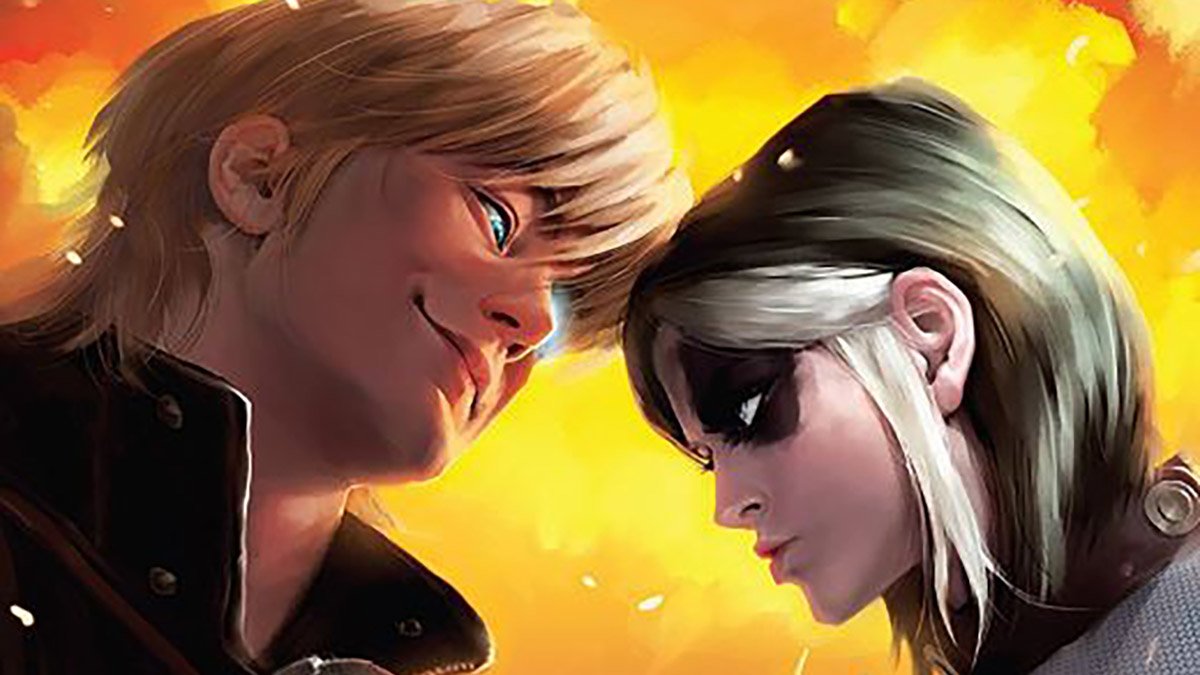 Domino #10 picks up right where Domino #9 dropped us, or rather where it dropped Longshot. Domino, Diamondback, and Outlaw had been hired by the Wakandan expatriate Shoon’kwa, a.k.a Atlas Bear, to assassinate Longshot in order to save humanity. Will Domino execute a Longshot based purely on prophecy? In the final panels of Domino #9, it looked very much like that answer was out of our lovely lady’s hands. 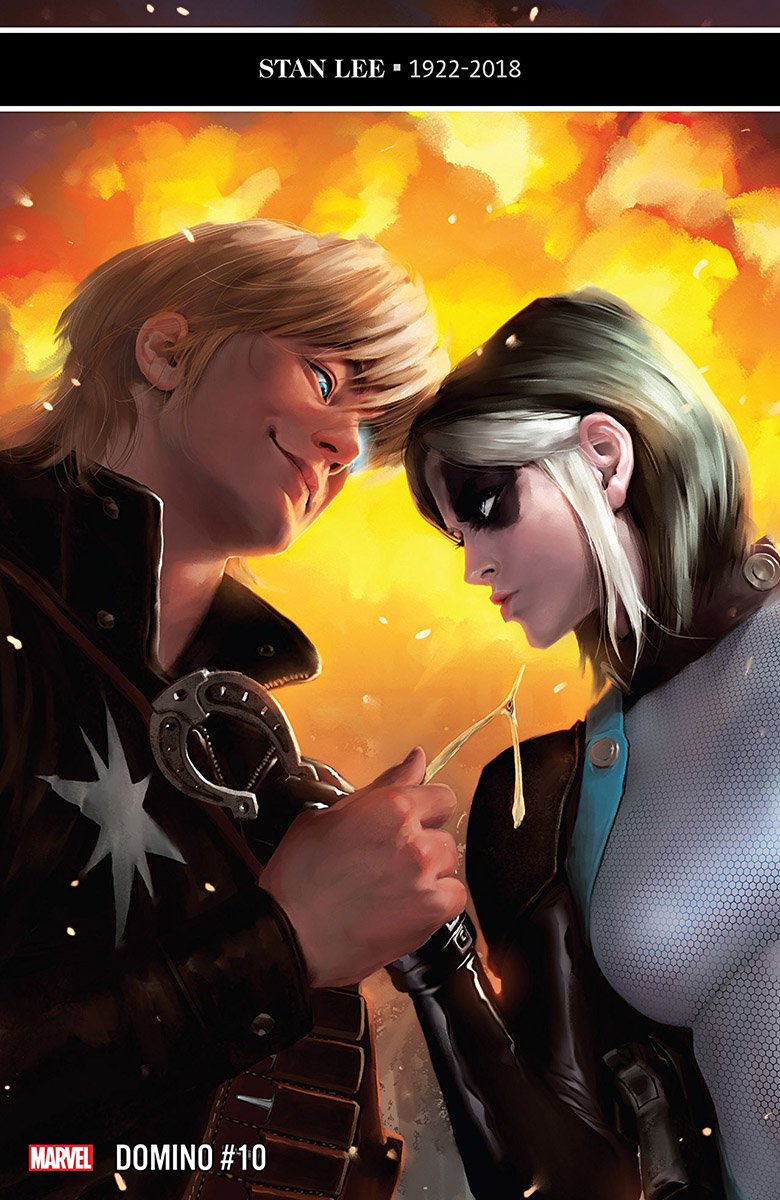 Domino #10 drops a solid bit of wisdom along with all the wit, action, and bad-assery. If you follow Domino, you know she says she’s not a hero. But in Domino #10 she finds herself in the Mojoverse and even with the Posse, she faces some nasty odds. Every time Domino chooses a side it costs her. Yet, here she goes again. There’s a lot of relevance to today’s world in this issue. Gail Simone drops truth bombs while setting up new Domino-fronted supergroup in Domino: Hotshots.

The fact is that there are times when you have to choose a side. Sometimes saving the world means you stand up regardless of the odds and regardless of who’s with you. Domino learns this lesson. It’s hard to miss the growth in Domino’s character over the last ten issues. It’s also hard how relevant some of what we see in Domino #10 is to our world today. Is this issue fun? Of course, it is. Is Domino still a Badass with a smart mouth? Of course, she is. Is there a bit of wisdom in this issue for all of us? Well, yeah. Most “True Believers” know that’s part of what comics do best. Deliver a little wisdom and truth with a solid dose of fun and kick-assery so that we can better see the hero inside ourselves.

Spoiler Warning: If you have not read Domino #10 There May Be Spoilers Below

Domino’s a mercenary. She generally does her job and doesn’t pick sides. Except when she does. Often that has cost her in one way or another. It still doesn’t stop her. Domino will tell you straight up she’s not a “good” person. That’s what makes her identifiable.

Gail does a very good job of demonstrating that both Atlas Bear (Shoon’kwa) and Domino are good people.

Domino is quick to help Longshot when she sees he is in need. She does this without hesitation, without requiring proof that he is legitimately sick. Atlas Bear believes that killing Longshot is for the greater good but before Domino is willing to condemn him to death, no matter how justified it may seem, she demands proof. She is willing to hesitate and protect him long enough to determine whether he is complicit in the future devastation that Atlas Bear foresees.

Atlas Bear, for her part, truly believes she is fighting for the good of humanity, she is reluctant to assist and yet it’s compassion that sways her. As she declares that by killing Longshot it will prevent the world’s children from being enslaved, she has no doubt in her mind that she fights for right and her cause is just. One life to save the lives of an entire world. Sounds like a no brainer but is it?

Domino is unwilling to slaughter a fellow mutant, no matter how justified it may seem, without being certain that there is no other way. It’s clear whatever evil there was in Longshot in Domino #9 is gone. Given his weakened state and pleas for help, Domino chooses a side. Domino’s willingness to choose the side of mercy, and compassion, combined with the determination to seek answers before passing judgment that forces Atlas Bear to examine her own heart. It’s this choice made by Domino that grants Longshot a stay of execution.

Save the World, Stand Up

Domino #10 takes us to the planet Orphan in the Mojoverse. Domino has grown a lot over the previous nine issues. She’s faced her demons, faced her past, made mistakes that cost her, and found her strength in friendship. Now we see Domino and her team come face to face with the overwhelming odds of a society clutched in the iron grip of greed and wealth built on the broken bodies of children bred to be gladiators.

Domino doesn’t suddenly wake up and become an activist after learning about the injustice that planet orphan is rife with. She simply sees what’s in front of her and acts on what she sees is right. She simply doesn’t ignore the need that is staring her in the face. Instead, she stands up and fights.

Gail’s masterful writing walks us through the changes happening in Domino while the art by Albuquerque, Baldeon, Piper, and Shelfer illustrates for us the external forces impacting her. Domino is becoming a leader. She’s growing up and this issue brings in to sharp contrast her introspective internal monologue with her witty smartass exterior.

Planet Orphan is a giant refugee camp. The poor are denied basic care and trained to fight for the amusement of the rich. The guards are there as Gail so eloquently writes it “To make sure poor people die in the dirt, uncared for and unremembered.” If you can’t draw at least a small parallel to the real world there’s not much I can do to explain it.

The fight scenes are beautiful. Especially the hope on the faces of those for whom are heroes are fighting. Domino’s mental narration is not a dissertation on social justice as you might expect. Instead, it is a gorgeous peek inside the mind of a woman in the mind of a woman who sees the beauty in her peers’ skill and is beginning to really understand herself, and her relationships. Domino has grown so much and the fact that she’s has chosen to step in a battle for something bigger than herself and her life demonstrates that she is definitely a hero.

I tend to stick with the Marvel recommendation of 12+ years of age for this series.

Side Note: If you are a geek parent, please note that reading this story arc with your kid might result in an understanding of social justice, mercy, compassion, and why it’s important not to make snap judgments.

“We’re not Avengers. We’re never gonna be Avengers. But we stood up. That’s what you have to do. You have to stand up.”

There’s a weird feeling of finality to this issue and I think that has a lot to do with Marvel setting up for the new Marvel mini-series Domino: Hotshots but who knows. With no new Domino cover released, teasers out for the new series, and Gail neither confirming nor denying whether this was our last visit with Domino… I guess we will have to trust our luck. 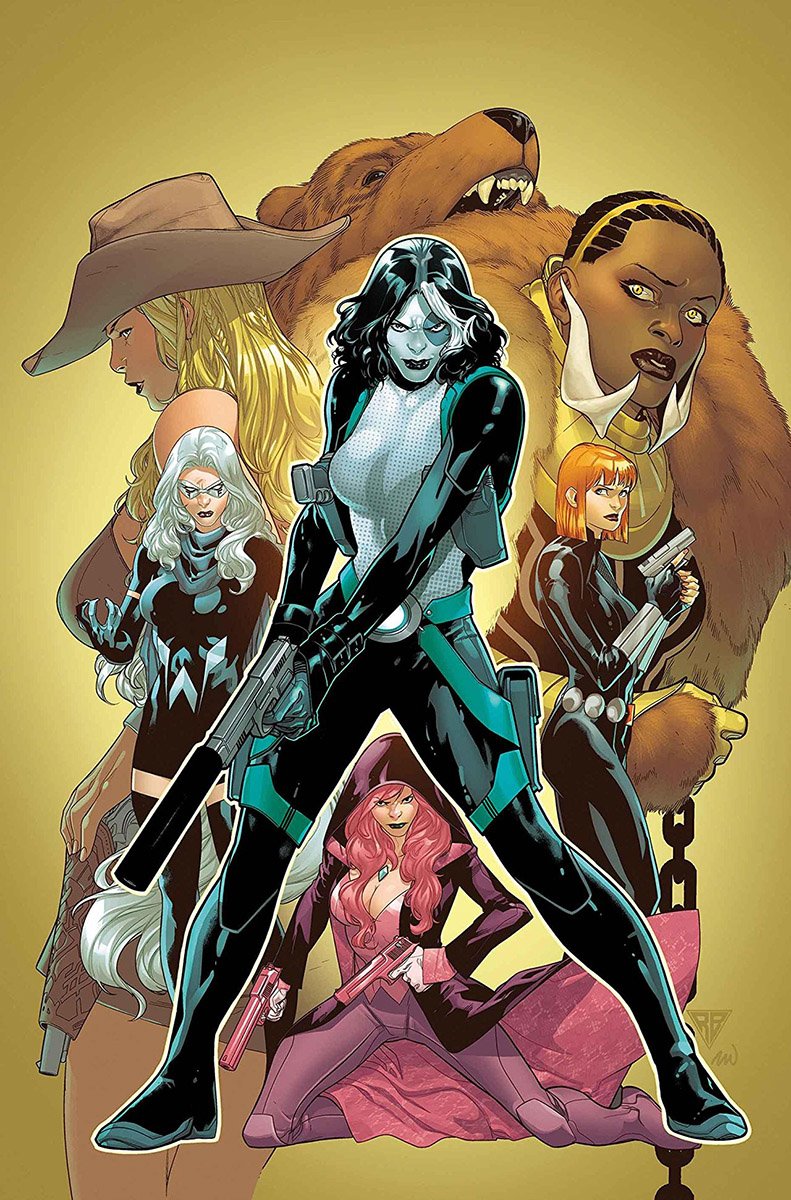 Between the Bookends: 5 Books We Read in April 2022