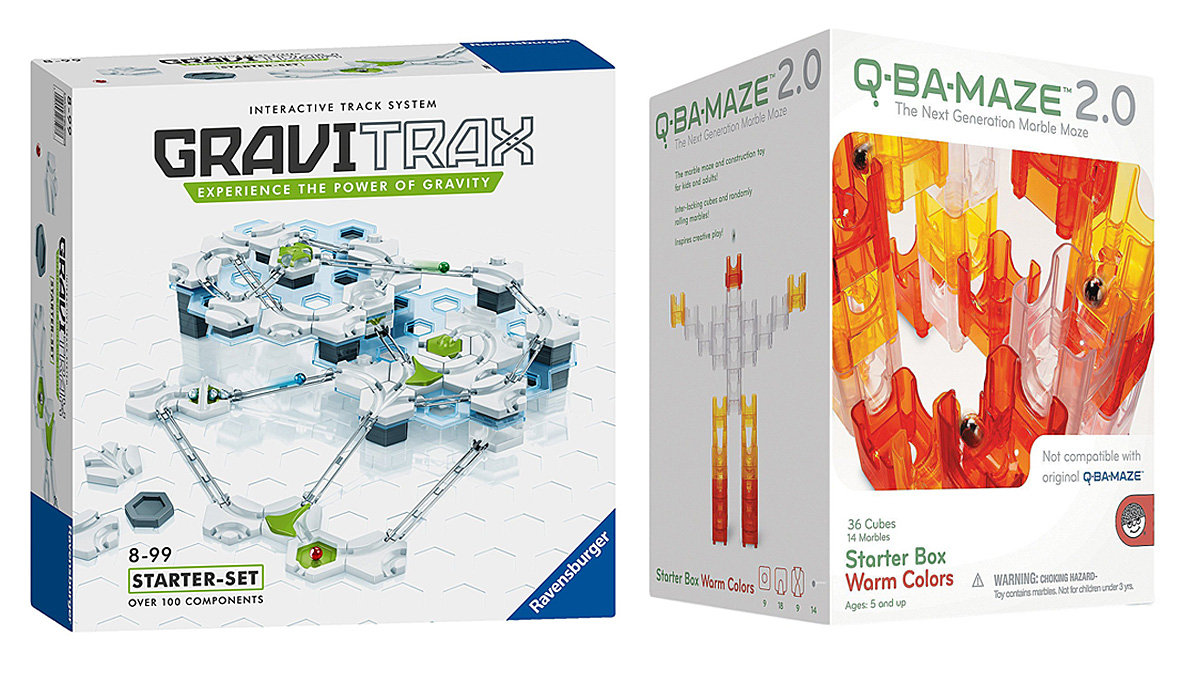 What Are GraviTrax and Q-Ba-Maze 2.0?

GraviTrax and Q-Ba-Maze 2.0 are both Marble Run style building systems. Both claim to be educational by teaching kids about physics as they build tracks that rely on gravity to propel metals balls along them and both systems can be expanded with various stunt pieces that increase the complexity and interest of the tracks.

GraviTrax is a system built from hexagonal pieces that slot into a large cardboard grid. This limits where you can build (unless you purchase an additional starter pack to increase your grid space) but gives the system exceptional stability. The GraviTrax system uses plastic curves connected by thin rails which are raised by towers created from stacks of other pieces. These tower pieces come in thick and thin heights and can be stacked in any order to give lots of flexibility in how tall you build each tower.

Q-Ba-Maze 2.0 is a system of plastic cubes that can be attached together to form mazes for marbles to fall through. Many additional pieces can be attached to the cubes to create stunts for the marbles to perform on their way down. The narrow cube bases mean that the system can be unstable if built too high without considerable attention being paid to the base.

How Easy Are GraviTrax and Q-Ba-Maze 2.0 to Build?

GraviTrax is exceptionally easy to build. The pieces can be simply stacked together and will stay in place unless physically knocked over. Nothing needs to be clicked into place or slotted together. I was initially concerned that the track pieces would fall off very easily as they rest on the curves without being secured, however, this is not the case and the tracks remain solid even when stunt cannons are hurling balls along them at significant rates of speed.

The Q-Ba-Maze 2.0 pieces slot together but we often found this quite difficult. The pieces only fit together one way which can be very awkward when trying to use the stunt sections because they always seemed to need to be attached backward to the way we were building. Because the cubes are so small (each one measures 1.5″ across), instability is a constant battle. We frequently needed one adult to hold on to an already constructed section to keep it together while another adult added in a new section.

The kits only come with the most basic instructions so it’s down to you to figure out how to put things together, and stunt pieces like the Pivot Trampoline in the Bounce Stunt Set are totally random with where they send marbles so you will often end up picking them up from the floor/under the sofa/etc. The idea is to aim them into another piece such as the vortex, but this isn’t always easy or possible to achieve. On the plus side, my son really enjoyed cascading marbles onto the trampoline and watching them bounce everywhere.

How Much Can You Do With Just The Starter Set and What Does It Cost?

The GraviTrax Starter Set costs $60 and is a complete toy in itself. Ours arrived in a package along with several expansions but we played with it for well over an hour before realizing we should probably open some of the other boxes too! The box contains:

The construction plan includes many different layouts at various levels of build difficulty, however, GraviTrax is so easy to learn that we were building the hardest tracks and coming up with our own designs within hours of opening the box. There are also challenge tracks which show finished tracks without instructions of how to get there.

The Q-Ba-Maze 2.0 Starter Box costs $25 and is fairly weak in comparison. The box contains:

That’s it. No stunts and not even any marble catchers. This means that if you build on a table, your metal marbles will come slamming down onto the surface as they fall through the maze and then start rolling off all over the place. We quickly discovered that this was deafeningly loud on a wooden table, yet the structures are usually too unstable to stand well on carpet.

What Expansions Are Available and What Do They Cost?

There are currently several expansion packs available for GraviTrax. Two are larger scale expansions containing either 29 (for the Expansion Building Set) or 44 (in the Expansion Trax Set) extra pieces including tracks, towers, balls, base plates, and curves. Both these expansions are priced at $25 and they will add a lot of capability to your set.

The smaller expansions are single stunt pieces including a loop, hammer, catapult, and additional cannon. At around $10 a piece, they are a little pricey, but they do add a lot of interest to your track designs – they were easily my 8-year-old son’s favorite things from both systems, particularly the Magnetic Cannon, one of which is included with the Starter Set as an example of the stunt pieces. If your kid gets really into building tracks, I’d recommend putting them on Christmas/birthday lists for the grandparents. We played with the Expansion Hammer ($10) and an additional Magnetic Cannon along with our Starter Set.

There are dozens of different expansions available for Q-Ba-Maze 2.0 and a staggering variety of price points. Many are stunt kits priced anywhere between $10 to an average of $50 but the Ultimate Stunt Set is an eye-watering $125. There are also kits containing extra building pieces and marble catchers in a rainbow of colors – although, in my opinion, these should really be included in the starter sets. We played with the Bounce Stunt Set ($10) and the Zoom Stunt Set ($18) in addition to our basic Starter Box.

It is worth noting here that expansion sets from the original Q-Ba-Maze system are not compatible with Q-Ba-Maze 2.0.

Which is the Most Fun, GraviTrax or Q-Ba-Maze 2.0?

Over the last six weeks, we have spent a lot of time playing with both systems. We’ve packed them in our car and taken them to visit with grandparents, and we’ve had kids over for playdates to try them out. Every single person, young and old, has reached the same conclusion: GraviTrax is the clear winner.

The GraviTrax system is one of those rare toys that is practically flawless. It just works, simple as that. It’s easy to learn, build, and customize. Kids can pick it up in seconds and start changing things to make it how they wanted, and there were endless cries of “oh, let’s try this!” whenever it was out of the box. If things aren’t working, it’s easy to work through your track, discover and solve the problem, and there is so much in the starter kit alone that you could easily get away without buying expansions at all – although I would highly recommend you do because they are a lot of fun! As my father-in-law said, with GraviTrax, most of the fun actually comes from building the track, not just a few seconds of watching the balls follow their various paths.

If I had to criticise the system, it would be that there were times where we built a tower and found that one piece of track was just too long to connect two curves, while the next size down was just too short. This could usually be solved by adjusting one or both towers, but it was frustrating when it happened. I would love to see telescopically adjustable track pieces added one day as this would solve the problem entirely.

As for Q-Ba-Maze 2.0, while the system was fun, it was just too awkward to play with for very long. Everybody found themselves getting annoyed with it very quickly, the marbles would end up going everywhere, and any time it was out I would inevitably hear the sound of plastic crashing to the ground followed by the moans of an irritated child. Ideally, the system needs wider bases to give it more structural support, or maybe even a clamp as with Hot Wheels tracks so it can be attached to an existing structure like a table. We also found Q-Ba-Maze 2.0 to be a far noisier toy that GraviTrax, to the point where after 10 minutes I would be asking my son to please stop playing with it because the constant clattering was giving me a headache.

Although GraviTrax has a significantly higher entry cost, it is worth every penny of that and it comes highly recommended. I hope extra expansions are available in the future because I know we will be playing with it for years to come.

GraviTrax will be released via Amazon in the US on July 2nd and is currently available to pre-order, Q-Ba-Maze is available now. GeekMom received both systems for review purposes. 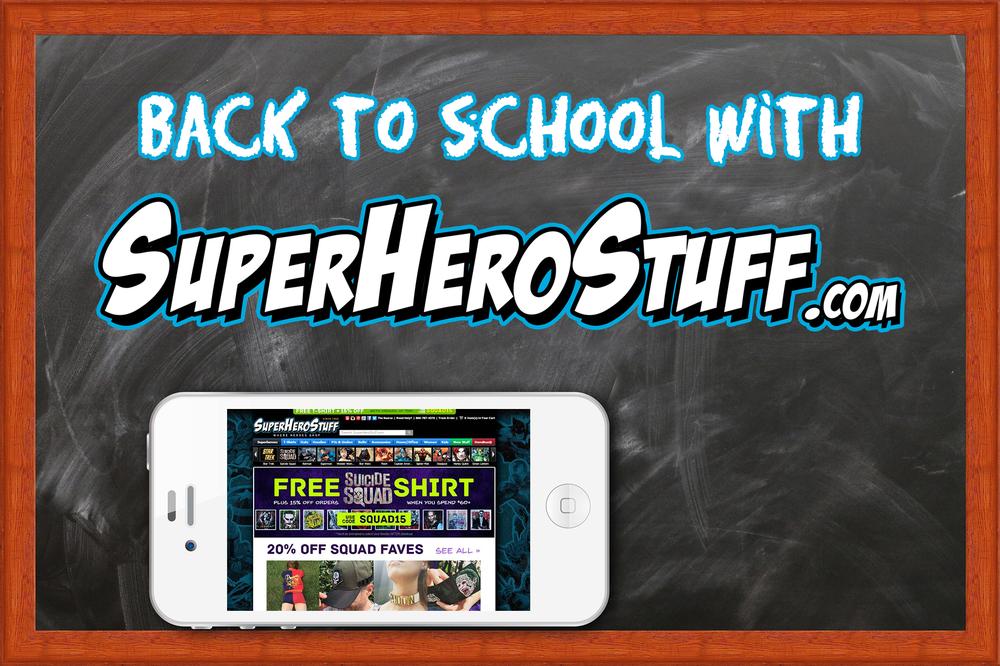 Back to School with SuperHeroStuff.com

3 thoughts on “GraviTrax Vs. Q-Ba-Maze 2.0: Comparing Next Generation Marble Runs”