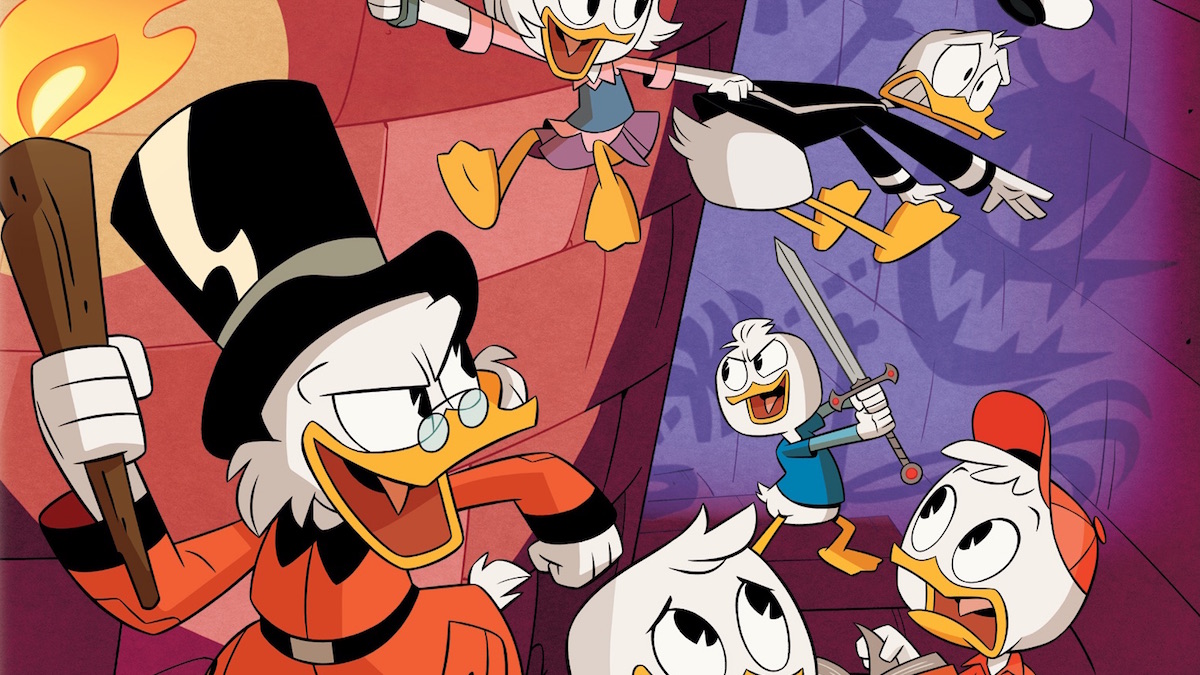 When I reviewed the first episode of Disney XD’s reboot of DuckTales, our entire family found it worthy of Disney’s Duck Family legacy, but I was skeptical if the entire series would maintain our interest. As it turns out, it did and we found ourselves regularly gathered for the next exploit of the Scrooge and his nephews throughout the season.

With the DVD collection for the first season, DuckTales Destination: Adventure!, coming this week, the big question is whether some of these episodes are worth watching more than once. Also, I was curious if there was enough exclusive content on the DVD, which contains just six of the new episodes from season one, to make it worth the purchase.

For fans of this new series, the answer on both counts is: “Yes, woo-oooo!”

For me, what really nailed my first impression of the show when it premiered last fall, and still impresses me, is the attention to the classic comic book look, and the many little tributes to the characters, stories, and visuals of Scrooge creator, Carl Barks. For those of us who grew up reading “The Good Artist,” these references are much appreciated.

Watching these episodes again gave me a chance to pay attention to how much care they put in making these adventures fresh enough for a new audience, without taking from the charm of what has drawn so many others to these characters for decades.

My favorite episodes for the first season were “The Missing Links of Moorshire!” where the properly Scottish rivals, Scrooge and Flintheart Glomgold, have to put aside their rivalry to escape an enchanted golf course; and “The Impossible Summit of Mt. Neverrest,” in which Scrooge and nephews try to take on the summit… and portals of the famous peak in attempts to be the first to scale it. Both of these really highlighted the essence of the new series, but I also really enjoy the “Beware the B.U.D.D.Y. System” for its inclusion of Gizmoduck and Darkwing.

I would have liked to seen the episodes “The House of Lucky Gander” and “Terror of the Terra-Firmians” included as well, since they feature other mainstays from the Carl Barks comics Gladstone Gander and the Terries and Fermies. I’m expecting, well hoping rather, there will be a second DVD set out with the remaining episodes from the first season.

One of the key features of DuckTales is it really focuses on the adventures of the nephews and their newfound pal Webby, which helps draw younger viewers in the adventures. We get to really see Webby come into her own, and enjoy some entirely unique personalities of Huey, Dewey, and Louie, thanks partially to the voice talents of Kate Micucci, Danny Pudi, Ben Schwartz, and Bobby Moynihan.

Like the original DuckTales series, we don’t see Donald (Tony Anselmo) in every episode, but enough to keep him relevant to the tale. There couldn’t be a Duckburg without Donald, after all.

Scrooge, however, voiced brilliantly by David Tennant, is still the show-stealer, and has some of the best one-liners in the whole first series.

Since this DVD includes the first season of the rebooted series, don’t expect the story to wrap up neatly. There are hints for what’s to come in the next season including the appearance of a favorite Scrooge rival who has been plaguing the “poor old duck” since his Carl Barks days.

The jokes, adventures, and look of the show lends itself to the retro style humor and storytelling of Carl Barks and predecessors like Don Rosa. It is slapstick and fast-paced enough to keep the stories moving, but it isn’t bogged down with too much of the over-the-top hyper humor that so many of these new cartoons have making them near impossible to enjoy if you’re over the age of nine.

As for the bonus content, there are two new “classic” DuckTales episodes included: “New Gizmo-Kids on the Block,” an early look a Fenton Crackshell (aka Gizmoduck), and “Ducky Mountain High.” Both of these were featured in the fourth and final season of the first DuckTales series.

The entire running time for all the episodes is just under three hours, so I highly suggest not binging, and watching it in small segments throughout the summer.

I recommend grabbing onto some DuckTales this summer for family viewing. Scrooge and the Duck Family invite you to the adventure.

Well, everyone except Santa Claus, that is… he knows what he did.

GeekMom Lisa received a copy of this DVD for review purposes.

Even Geek Parents Can Embarrass Their Geek Kids

Joss Whedon’s Much Ado About Nothing

Enter to Win Guillermo Del Toro’s The Strain: Season One