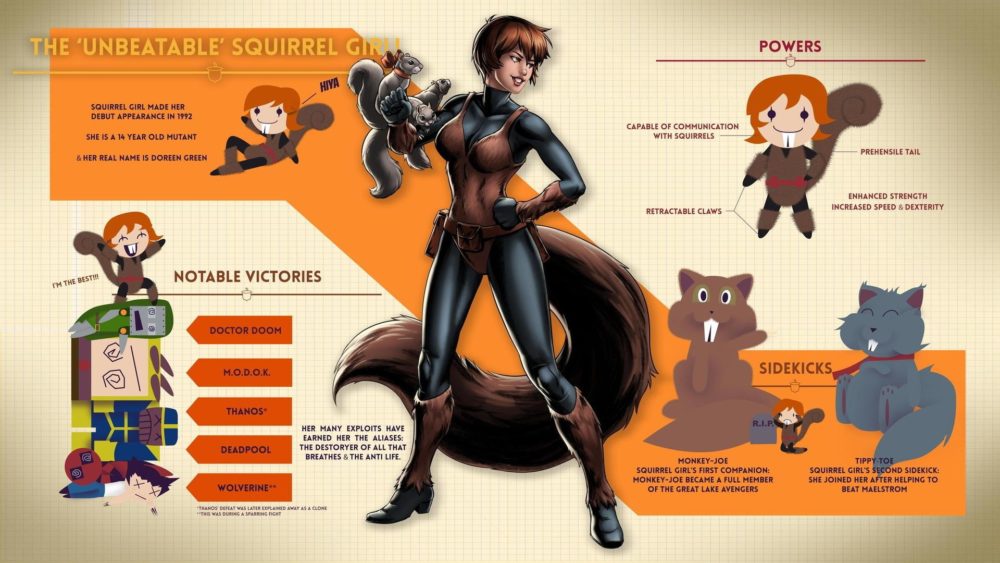 Creators: Will Murray and Steve Ditko

Doreen was originally introduced as a mutant, intended to be a light-hearted character in comparison to the often heavy storylines popular at Marvel at the time. Her victories over super-villains no other hero had been able to defeat are creative and outlandish as hell (in the best possible way), including: overwhelming said enemy with an army of squirrels, weaponizing horrifically smelly garbage, and using her computer science skills.

Born in LA, determined to be a hero, Squirrel Girl ambushed Iron Man in a forest to prove her worth, hoping to become his sidekick. Doctor Doom attacked and Iron Man was captured; Doreen freed him by overwhelming Doom with her “surprisingly effective” army of squirrels. Though impressed, Iron Man felt she was too young to fight crime though he promised to put in a good word with the Avengers when Doreen was older.

There were plans to include Squirrel Girl as a permanent fixture in the New Warriors book, but the creative team changed abruptly and Doreen disappeared for a decade, referenced only once in Deadpool #7 when “Blind Al” mentioned having bleached her “Deadpool Underoos.”

In 2005, the Squirrel Girl was revived and relocated to New York, where she joined the Great Lakes Avengers. After being subpoenaed by the Avengers for copyright infringement, the team discovers they’re all mutants (how did they not know this before? I haven’t a clue) and renamed themselves the Great Lakes X-Men. After Doreen defeated M.O.D.O.K., Terrax, and Thanos, Dum Dum Dugan (of Howling Commandos fame) offers her a position with S.H.I.E.L.D.; she declined, explaining she was happy with the Great Lakes X-Men.

After helping the Thing on a mission, she was invited to the Annual Superheroes Poker Tournament (because of course there’s one) and brought her team with her. There, they were discouraged from using the name X-Men or their backup, the Defenders, as the names are already in use (this is, apparently, something of a running gag) and became the Great Lakes Champions instead. During the first Civil War, the team was attacked by Deadpool for non-compliance with the Superhero Registration Act despite all of the members having registered; only after kicking the Merc’s butt against all odds (another running gag) does Squirrel Girl have a chance to explain they have registered and are now the Great Lakes Initiative.

Doreen did eventually leave the team, becoming an ancillary member of the New Avengers when Luke Cage and Jessica Jones hired her as a nanny for their daughter, Danielle. When the couple left the Avengers, she departed with them and continued to care for Danielle, though she and her squirrel sidekick, Tippy Toe, rejoined the New Avengers after Secret Wars.

While attending Empire State University, majoring in computer sciences (trust me, this is important later) Squirrel Girl faced Kraven the Hunter, who for some inexplicable reason was targeting New York’s squirrels; Galactus, who she befriended and redirected to a non-inhabited planet; and Brain Drain, who she reprogrammed (see, it was important), updating his programming to give him free will he utilized to become a fellow ESU computer science student. During a time travel storyline, Doreen defeated Doctor Doom again by repeatedly going back in time to a day before the fight, thus creating an army of herself that forced Doom to surrender.

She has appeared intermittently on several of the Marvel animated series and is slated for a more permanent home on the upcoming New Warriors show.

This girl is just all kinds of rad, maintaining a positive outlook and a lust for life in the face of all the baggage most heroes seem to carry these days. She’s faced down most of Marvel’s heavy hitter villains and won, be it with her furry army or with her compassion. Issue 14 of her latest ongoing series, The Unbeatable Squirrel Girl, is out next week; I think we all have some catching up to do.

2 thoughts on “Get to Know a Hero: The Unbeatable Squirrel Girl”