Paradiso. Despite Paradiso’s uplifting name, the dark escape room mystery takes its guests into an expertly crafted underworld. Hidden away on an upper floor of an executive office space, Paradiso creates a multilayered world using actors and actresses to supplement the physical experience. Combining a sense of both psychological and physical discomfort, the escape room experience is more than an esoteric mental challenge. It is a fully immersive experience that begins 24 hours before your scheduled arrival and continues until you walk out the last door.

The psychological design of Paradiso has elements reminiscent of The LOST Experience from 2006 and the wildly popular Sleep No More. The multimedia aspects of the escape room start with texts and websites giving you a sense of insider information, similar in creepy feel to the Dharma Initiative. Increasingly, Virgil Crop is represented as a corrupt, villainous multinational corporation. The rooms, as you work your way through them, add to this sense of mystery. The source material of Dane, Kubrik, and Scott are evident. The room flow, with some modern and others more Sherlockian, create a pastiche of stylistic elements that offer a feeling of moving through time. When questioned about the flow and designs, Michael Counts responded,

“Blade Runner is one of my favorite movies and Kubrik, generally, has such a clear aesthetic that I’ve always been drawn to. I think the room that people have begun calling the “Library” is definitely referencing Blade Runner—and the first office (the reception area) is referencing Kubrik (but again more generally). The flow of the rooms is based on my sense of a theatrical progression—light following dark, closed following open, and so forth. The specific layout and how to shape a physical environment as well as the theatrical and escape experience are a bit of a Rubik’s cube so it is hard to consider one piece independently of the rest. The existing space guided a lot—where doors were, etc.—but my primary tool in designing any immersive theatrical experience is my intuitive sense of the “feeling” (for lack of a better word) of the experience and how it should unfold. In terms of Dante, the idea of the Virgil Corporation is a play on the ideas on which the Divine Comedy is based. The intentions of the company (so they claim) are consistent with Virgil’s role in the Divine Comedy—that is, leading Dante to Paradise—but now in modern context and within the human sphere. Relative to other “escape rooms” that have different themes and the like, we are intentionally different as ours is based on one continuous narrative. Future Chapters will continue the same narrative as well—in fact the 5 chapter structure that we intend to implement will be an analogue to the whole Divine Comedy—featuring the 9 Circles of Hell, Purgatory, and Paradise. Chapter 1 is essentially the Prologue.”

This sense of unease is enhanced by Paradiso’s location in an anonymous office building complete with doorman. Ushered up to the Korean karaoke bar where your experience begins (and, according to GeekDad Jamie, fairly authentic as such kind of bar), you can sit down and begin your descent into the world that has been created.

GeekDad Jamie arrived first. As my husband and I entered the building, my phone started vibrating in my pocket with a series of texts from Jamie.

The darkened bar has a futuristic yet weirdly Prohibition Era vibe to it. Checking in at the front door, we were then ushered into the darkened bar. Ordering our drinks, we watched as the group ahead of us began their adventure. We watched trepidatiously knowing that we would be next and not knowing what to expect. 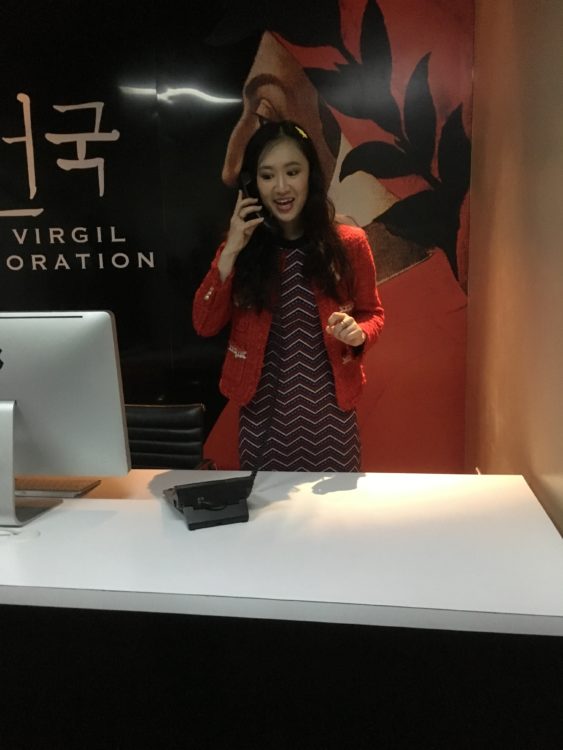 When our names were called, we followed a dourly serious man and were treated like military recruits. As he lined us up against the wall, he gave us additional puzzle cards and ushered us into the first room. From here, the experience unfolded with characters engaging with us, decisions to be made, and enough mystery to keep us wanting to continue with the various missions. As we entered the last room, the sense of urgency increased.

Working through the puzzles, we began to get warm. Many of us unburdened ourselves from the multiple fall layers we had worn. The room’s temperature change increased the sense of confinement and entrapment making us work harder, faster, and, in some cases, less carefully.

Walking out of Paradiso, our group felt an immense sense of relief as well as pride in having completed the rooms. However, the sense of having been embroiled in a mystery greater than ourselves truly made the experience unique. Paradiso is far more than an “escape room.” It is an immersive experience in line with The LOST Experience or Sleep No More that makes it unique and something not to be missed.

In the Garret with the Grammar Geek: Reclaiming the Eyes

“We’ll Get Around to It Eventually”: Fitting a Wedding Into a Military Lifestyle