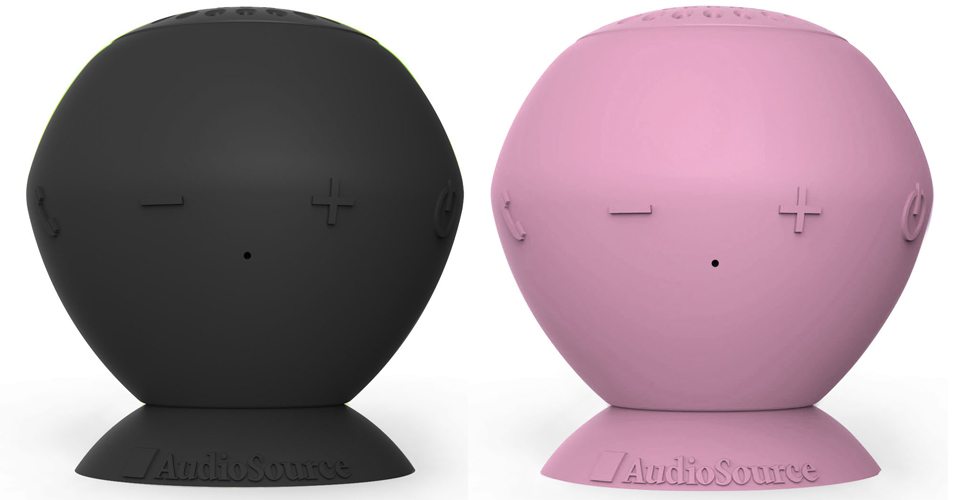 These days, who wants to be tethered? Smartphones and tablets allow users to carry a wealth of entertainment in a very portable package. The downside is that they sound sort of crappy. To capitalize on that crappiness, there’s a slew of speakers out there that can pair nicely with just about every portable imaginable.

AudioSource’s Sound pOp is one of the newer options that’s a nice standout—and not just because it’s circular. This speaker is small, but packs in some pretty impressive technology for something that’s about the size of a baseball.

First up, it has Bluetooth, which means that you can stream music directly to the speaker from a compatible smartphone, tablet, or PC. No wires are needed. The lineup can include stored music tracks, Pandora, Netflix, Angry Birds, movie trailers, and any other audio that can be conjured up on a Bluetooth-enabled device. It also makes all of those things sound pretty decent, thanks to digital signal processing (DSP), a 1.5-inch high-efficiency driver, and Class D amplification. Last, but certainly not least, the Sound pOp has HD Voice and noise cancellation features, as well as a built-in microphone, for making and taking phone calls that you can actually understand.

The Sound pOp does have one cable, so you can juice it up via the USB port on your computer. Once you give it a good charging (three to four hours are recommended), you can stick it almost anywhere—literally. The speaker has a little suction cup on the back, which makes it easy to stick to windows, tables, countertops, and other similar surfaces. It can even stick to the back of your smartphone and double as a stand. Even better, it sticks inside the shower. Yes, our little friend is completely waterproof.

This means that you no longer have to sing in the shower a cappella. Instead, you can place your Bluetooth-enabled smartphone or tablet a safe distance (up to 32 feet) and stream your favorite music into the shower.

Sound pOp has buttons for power and volume, as well as one that will turn this little ball into a speakerphone. Turning the Sound pOp on and off sets off a series of brief popping sounds. The first time I turned the unit on, my husband and son were like two cavemen seeing fire for the first time. Even our dog wanted to know what was up.

Well, the Sound pOp is worth the interest. It’s important to note that with a 3-watt Class D amplifier, this thing isn’t going to rock the house, the room, or even the picnic table. It’s not made to produce monster sound. However, it does provide a nice personal audio experience and it’s certainly a lot better than what your favorite portable can currently deliver. It’s also well worth the $39.99 MSRP.

I must admit, though, once I closed that shower door, the Sound pOp sounded nice and loud, whether I was blasting punk, classic rock, or kiddie tunes. Something worth mentioning is that if your phone rings or has another audible alarm, you’re going to lose your tunes. For instance, I had set an alarm for myself before I got into the shower and completely forgot about it (hence, the alarm). When it went off, I lost my music and couldn’t get back to it until I was able to get to my phone. There’s no play button or other like controls on the Sound pOp unit. That said, this is the case with almost every wireless speaker out there, especially ones at this price point. However, if you find yourself with a call coming in, that’s easy to answer via the Sound pOp’s speakerphone button.

AudioSource promises about eight hours of Sound pOp playtime on a single charge. I didn’t really time my usage, but the Sound pOp stuck with me (literally) through several showers, at least two laundry sessions, and one episode of Breaking Bad. It’s important to note that you probably don’t want to leave Sound pOp hanging in the shower overnight. It really doesn’t have the strength to hang on that long.

Sure, there are several other Bluetooth speakers out there. Many of them are way better, with a price tag to match that performance. GeekMom Patricia recently gave us a peek at the JBL Charge, which doesn’t even begin to scratch the surface of how much these speakers can cost. Even the Sound pOp’s shape isn’t all that unique. The newest, most notable circular speaker is probably Sony’s SRS-BTV5 Speaker Ball. The two have a similar performance, but the Sound pOp is about $30 cheaper. It’s also waterproof and available in seven different colors (with another three coming by the end of this year). Those added perks make the Sound pOp a fun little purchase.