Radio Plays were one of the highlights of my 1930s History Through the Creative Arts Camp. I had taught a class on writing and recording radio plays previously so I wasn’t starting from scratch. Still, I wanted to do these in the style of old-timey radio, so research was needed. Then I wrote the plays. We recorded them the first day of camp. And finally, I had to edit them to present each day. It was a lot of work. But so entertaining every step of the way!

I started my research one day when I was sick. I had a slight fever, which wasn’t enough to knock me out, but enough that I couldn’t focus my eyes on anything. I listened to radio broadcasts from the 1930s. I was so impressed with the talent: the writing, acting, and sound effects. Plus, these were done live! No editing afterwards! So cool (I thought so even when the fever broke)!

If you’re going to start somewhere, go with Superman. He’s seventy-five this year and the radio show version was a hoot. You can listen to a podcast of the episodes for free, or the album

. Then play around with podcasts of various shows from vintage radio. Finally, take an hour with your family and listen to Orson Welles’s War of the Worlds

broadcast. I read Aliens Are Coming!: The True Account Of The 1938 War Of The Worlds Radio Broadcast

to my campers first before we listened to selections from this incredible adaptation of the classic novel.

Although I toyed with the idea of having the students write their own plays, we just didn’t have time. I started reading radio scripts from the ’30s, trying to find the perfect ones we could record: the right amount of actors, length, amusement factor, etc. Although I found plenty to read, none were exactly what I was looking for. I decided to write my own. Radio script format is very close to movies and plays. In the end I had three scripts: a twenty page romantic comedy in four sections called “The Knapowitz Sisters,” a ten page sci-fi drama, “Secret Science Stories: No Time,” and finally five pages of intros, commentary, and ads for our fictional station WKMP. If only there was a market for radio plays…

Having done that radio plays class before I knew what a job I had ahead of me for editing–and with a deadline. So I gathered all the sound effect files I would need ahead of time. Although making the sound effects live during the recording was possible for some things, others (like footsteps) were just easier to download.

The first day of camp, I handed out scripts for the students to rehearse briefly before doing the recordings. We did all the plays in about two hours. There was a brief panic that one of the recordings got erased when the computer was accidentally unplugged, but I had transferred the file to iTunes just before. Although the original recording files were gone, I still had something to work with.

Then I came home from teaching a long day at camp to edit until the wee hours of the morning. The plan was to have a radio broadcast of the recordings, plus vintage radio broadcasts, at the end of each day. Just like families did in the 1930s, we would gather around the “home” area of camp on chairs and pillows and listen to the radio. I felt I did a rush job, but truly, it didn’t matter. The kids were hilarious at their parts, and were both embarrassed and excited to hear themselves on the finished product. I wish I could have had just a little more time to edit, but my children told me not to be a perfectionist, “Mom, they’re FINE!”

We also listened to a couple of FDR’s fireside chats. This brought together much of what they were learning about during the day. What an inspiring speaker. On the final day of camp, both the students and their parents gathered around to listen to the final broadcast of WKMP, including FDR’s speech

about the Pearl Harbor attack, “a day that will live in infamy.” It was chilling, hearing those words, and knowing we were about to enter World War II. Yet the people who were listening to that speech the first time around, had no idea what was ahead.

I hope you check out the old radio broadcasts, and then write and record your own!

The Geeky Side of Pumpkin Carving: This Is the Droid You’re Looking For 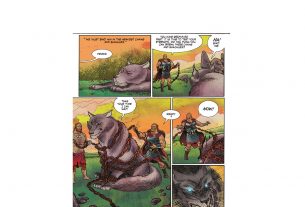