Last week I was browsing one of those pop-up Halloween stores in what was probably an abandoned Borders with a friend who apparently hasn’t tried to purchase a Halloween costume in some time. Our conversation mirrored the scene in a Duane Reade in the Sex and the City movie:

Miranda: The only two choices for women: witch and sexy kitten.
Carrie : You just said a mouthful there, sister.

It gets worse every year, and the sizes of the Sexy Fill-In-The-Blank costumes are drifting down into the sizes for girls of an age that should never be described as sexy. Although I always make my kids’ costumes, we do like to wander the Halloween stores for inspiration. My son was faced with massive walls of choices: gobs of superhoes, movie heroes and villains, cartoon characters, and more. All my daughter wanted was to see what they offered in Star Wars costumes for girls. The answer? Not one. And not due to lack of selection. Here’s a portion of the wall of Star Wars costumes:

If you’re an adult woman, it’s worse. In the aforementioned trip with a friend to a different Halloween store, I had a hard time finding any costume for a woman that wasn’t a sexed-up version of the character. If you actually want to look like a character, you can forget it.

But there are two solutions. One, if sexy kitten/policewoman/fairy is your thing, then go right ahead. I decided to be She-Ra this year for our 80s-themed party. She-Ra happens to wear a strapless white dress and knee-high gold boots. Of course, it turns out that even She-Ra can be sexed up–when searching for images to base my pattern on, I kept coming across one that mainly consisted of fishnets, a garter belt, and a bustier.

Plan B: Take Back Halloween. The site’s mission:

My plan for She-Ra was to have a Dragon*Con costume already ready next year that didn’t involve underwear from another century and ten layers of fabric in the Atlanta heat. But I love the idea of choosing historic figures–particularly a gigantic queen gown. And who doesn’t love a good feather boa?

My kids, for what it’s worth, teamed up and chose Mario and Princess Peach. Regular Princess Peach, in a gown so puffy, it took five yards of fabric to make in the four-year-old size.

Lego Batman 2 — Bring It On 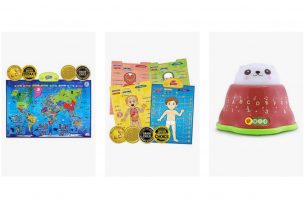 18 thoughts on “Take Back Halloween: Your Costume Name Doesn’t Have To Feature The Word “Sexy””