Yes, it’s only August, but Hallmark ornaments are already out for purchase at stores. I freely admit that I’m one of the people that’s in the store as soon as I see that cute little Christmas display. I run inside and start checking to see which ones light up and which ones make noise. There is a chance that the folks at my local store see me coming and roll their eyes, because I have to press every button and hear each sound effect and every famous line spoken by the characters I love. A few weeks ago, back at San Diego Comic-Con, Hallmark had a wonderful booth set up with all their latest releases. The coolest part was the sneak peek of ornaments that aren’t due out until Christmas of 2012.

I snapped pictures of the little sneak peek cards, feeling vaguely like a spy. Although, I suppose my not-at-all-stealthy squeals of excitement were very un-spy-like.  This year Hallmark started a new series of Lego Star Wars ornaments. The first in the series, Darth Vader is available now and next year you’ll be able to add an adorable Stormtrooper to your collection. No word yet on how many total ornaments in the series, but since this is the first year, now is the time to grab Vader so your collection can be complete.

If Star Wars isn’t your speed, what about a car that will take you Back to the Future? There will be a DeLorean ornament available next year and I’m sort of hoping that there will be a secret button that will activate a teeny, tiny flux capacitor and send me back in time. Or maybe I should move forward? I’ll have to think about that a bit.

And there is no question that I must have the world’s cutest evil monster adorning my tree. Yes, the Stay Puft Marshmallow Man from Ghostbusters will also be coming out next year. I will put him on the very front of my tree and gaze at his evil cuteness while I roast real marshmallows in my fireplace.

Although you can only look at the pictures and count the days until these fantastic ornaments are available, thanks to the folks at Hallmark you can still win some great prizes right now! Two lucky winners will each receive a Showdown at the Cantina Keepsake Ornament and a variety of Maxine and hoops&yoyo gifts.
Just go to the end of this post and leave a comment telling us what your all-time favorite Hallmark ornament is and why. The contest will run through midnight on Friday, August 19th. Good luck!
Liked it? Take a second to support GeekMom and GeekDad on Patreon! 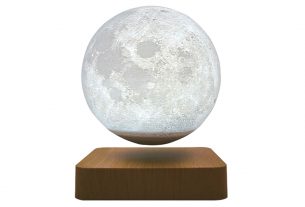 Go On the Earth to Echo Geocache Adventure