They are the opening band. I have yet to throw my panties on the stage – but when I do, they will be unique and geeky. My husband introduced me to the The Captain’s Wife’s Lament and Nun Fight a couple of years ago. When I heard these songs, by two guys who have obvious musical talent, I was an instant minion.

I am of course talking about Paul and Storm. The comedy music duo has performed with Jonathan Coulton, and most recently, their own project with Wil Wheaton and Adam Savage: W00tStock.

Recently, I had the opportunity to have an e-mail dialog with the musical duo. We discussed their musical roots and how they balance a hectic tour schedule with family life:

GeekMom: Were you band nerds and/or choir geeks before Da Vinci’s Notebook?

Storm: DEFINITELY. Throughout high school and college I was in show choirs, chorales, madrigal groups, plays and musicals, and above all else a cappella. I never seriously played an instrument, though, until we started up as Paul and Storm.

Paul:  Same here, though I was more a band geek than choir geek (but I did both). Always enjoyed singing harmony, and tried unsuccessfully to start a barbershop quartet in junior high school.

GM: Did you ever think you would become the geek icons you are now? Is this where you thought you would be? Do you even consider yourselves to be geeks?

S: Not even in my most spice-induced dreams did I imagine there’d ever be something called a “geek icon”, so I’d have to say “no”. But I always did have a vague sense that I’d be doing something fun and creative like we are right now, and since I’m most certainly a geek (60% geek, 30% nerd, 5% dork, 5% other), our current situation feels right.

GM: You are married? Are your spouses geeks as well?

S: Yep, happily married. My wife is a geek of the bookworm variety, but mostly she’s just really, really smart.

P: My wife, while very smart (way smarter than I, certainly), is no geek. My older daughter is, though, and proudly so. She’s plowing her way through all the seasons of Futurama as we speak.

GM: How do you balance home life with your touring and W00tstock schedules?

S: We try not to be on the road for long stretches, which helps, but sometimes it’s unavoidable. Mostly we go out for extended weekends, and we also make sure to block out “sacred time” in the schedule for important family occasions.

P: It helps that, when we’re home, we’re home 24/7, especially in my case, what with two kids in school and such. It’s an odd schedule sometimes, but our families are quite used to it now.

GM: Would you ever consider writing a children’s album?

S: It would be a lot of fun, and I think about it a lot. Kids have always been attracted to our music–lots of harmony and melody, etc.–but it can put you in a tough spot when you’re an act that does a fair amount of “blue” material. Even as it is we have people bring their kids to our “adult” shows, which can be awkward. TMBG handles it really well. When they come to town they’ll often have both a kid’s show and an adult show, and they’re careful about making clear which is which.

GM: What would your Paul and Storm cover band name be?

GM: You have become icons of the geek music scene. Who are your icons?

S: A lot of them are musical, like the Beatles, Weird Al Yankovic, and TMBG. But I also carry around in my head folks like Monty Python, the Muppets, Fonzie, and Douglas Adams.

P: Not to mention authors (Neil Gaiman, John Scalzi, to name two); and not to get maudlin, but I count Wil Wheaton and Adam Savage as well: two guys who have been very successful being exactly who they are and doing exactly what they love.

I have high hopes of there someday being a children’s album. If there is, I will be the first to buy it for my kids. Until then, I will leave you with my most recent Paul and Storm favorite (in hopes that it will be on the Rock Band network soon): Frogger! The Frogger Musical… 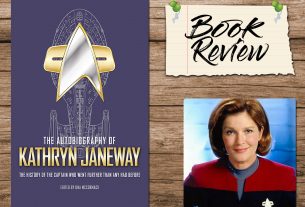 ‘The Autobiography of Kathryn Janeway’ Edited by Una McCormack

6 thoughts on “Storm And Paul Is Their Cover Band Name”