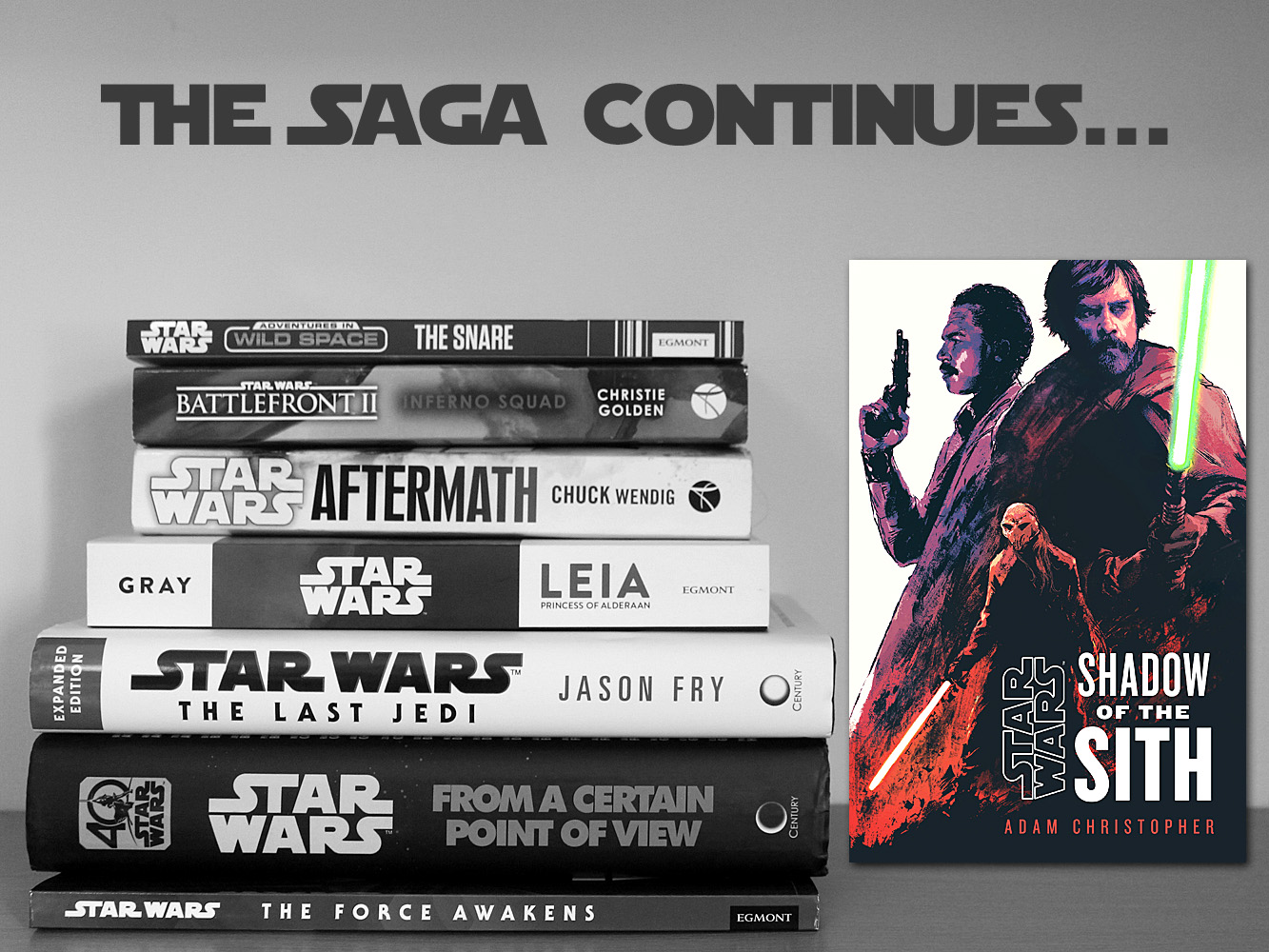 In Shadow of the Sith by Adam Christopher, we follow Jedi Master Luke Skywalker and his old friend Lando Calrissian as they take on a new mission set 13 years before the events of The Force Awakens (and 17 years after Return of the Jedi).

Luke Skywalker is having visions. Visions of a dark, barren, desolate place where the sky is lit by lightning and filled with the kind of darkness that only comes about through the Dark Side of the Force. Despite his fears about leaving behind his newly established Jedi temple, and his nephew Ben, Luke knows he must seek out the source of his visions in order to stop a new Sith threat from rising.

Lando Calrissian is lost. It has been six years since his daughter Kadara was kidnapped and he is still no closer to finding her than he was back then. His friends, while still supportive, have had to return to their own lives and now he wanders the galaxy in an endless hunt for leads. That’s how he happens to overhear a conversation in a bar where an alien calling himself Ochi of Bestoon claims to be on a mission from the Sith. A mission to kidnap a little girl.

Dathan and Miramar are on the run. They’ve always known this day would come, the day when their safety—and the safety of their six-year-old daughter Rey—would be threatened by Dathan’s past and the ever-present threat of who his father was. Now they’re limping across the galaxy in a broken-down spaceship barely capable of lightspeed travel and running out of options.

As all of them begin to converge, Luke and Lando realize that the plight of the young family they so desperately want to protect is somehow linked to the rising threat of the Sith. As they call in favors from friends old and new, it becomes a race against time to both quell the looming shadow of the Dark Side and catch up to the family who is always just one step ahead of them.

I feel like I need to start this review by saying that I wasn’t a big fan of The Rise of Skywalker. While the film had good elements, it leaped about too much and never gave over enough time to the emotional weight behind Rey’s journey and the discoveries she makes. Shadow of the Sith attempts to begin fixing some of that. In it, we follow Rey’s final days with her parents and find out just how she came to be stranded alone on Jakku, as well as how her wannabe kidnapper Ochi ended up dead in the Forbidden Valley of Pasaana. It’s a story told in desperation and in love, the love of a parent to do anything to keep their child safe, even if it means making the hardest decisions of their lives.

Lando’s story is in many ways equally tragic. Now approaching his fifties, he can feel himself slowing down. He catches glimpses of his reflection and no longer sees the self-assured, borderline arrogant young man he once was and begins to fear that he may now be too old to make the big differences he once did in the galaxy. If he hasn’t even been able to find his own daughter, then what good can he do for the galaxy at large? When he overhears Ochi talking about his mission, Lando clearly sees this as an opportunity for redemption: if he can save this little girl then perhaps that will make up in some way for not being able to save his own? We know from the beginning that it’s a mission at least partially doomed to failure given we know that Rey will end up alone on Jakku (although, critically, alive and free from Palpatine), but Lando’s journey is, possibly, the more powerful for that.

One of the biggest surprises I had in Shadow of the Sith was that it significantly changed my perspective on one very minor character from The Force Awakens in just a handful of sentences. I also loved the new character of Komat and the planet Polaar which she has made her home; both are incredibly unique, and I hope we see more of them in future Star Wars material. I would especially love to see Polaar on screen one day because I think the visuals there would be wildly different from anything we have seen so far. I was also surprised by the level of violence in the book. Ochi of Bestoon is a terrifying villain, and his innate love of violence is consistently amplified through the Sith relic he is given at the beginning of the story, giving rise to scenes that would be more fitting in a graphic thriller novel. His cruelty toward D-O was also deeply upsetting but explains the little droid’s personality in The Rise of Skywalker. More violence comes in a sequence of flashbacks experienced by Luke that have echoes of the holocaust, making them exceptionally traumatic to read, although these are thankfully very short.

I went into Shadow of the Sith unsure as to how much I would enjoy it, given it was set during a time period I was generally less interested in and significantly focused on Lando, a character I’ve never especially taken to. However, I ended up devouring the whole thing rapidly and staying up late to finish it when I just couldn’t put it down in the last 100 pages. It’s a difficult book to read at times, with its depictions of violence, loss, and fear, but all those things are so thoroughly wrapped up in love and the desire to help others that they are outweighed, and I came away from Shadow of the Sith feeling inspired and uplifted. No, it hasn’t fixed The Rise of Skywalker, but it has definitely improved it.

Between the Bookends May 2016: A Bad-Ass Baseball Bloodline

To Kill a Mockingbird Celebrates 50 Years