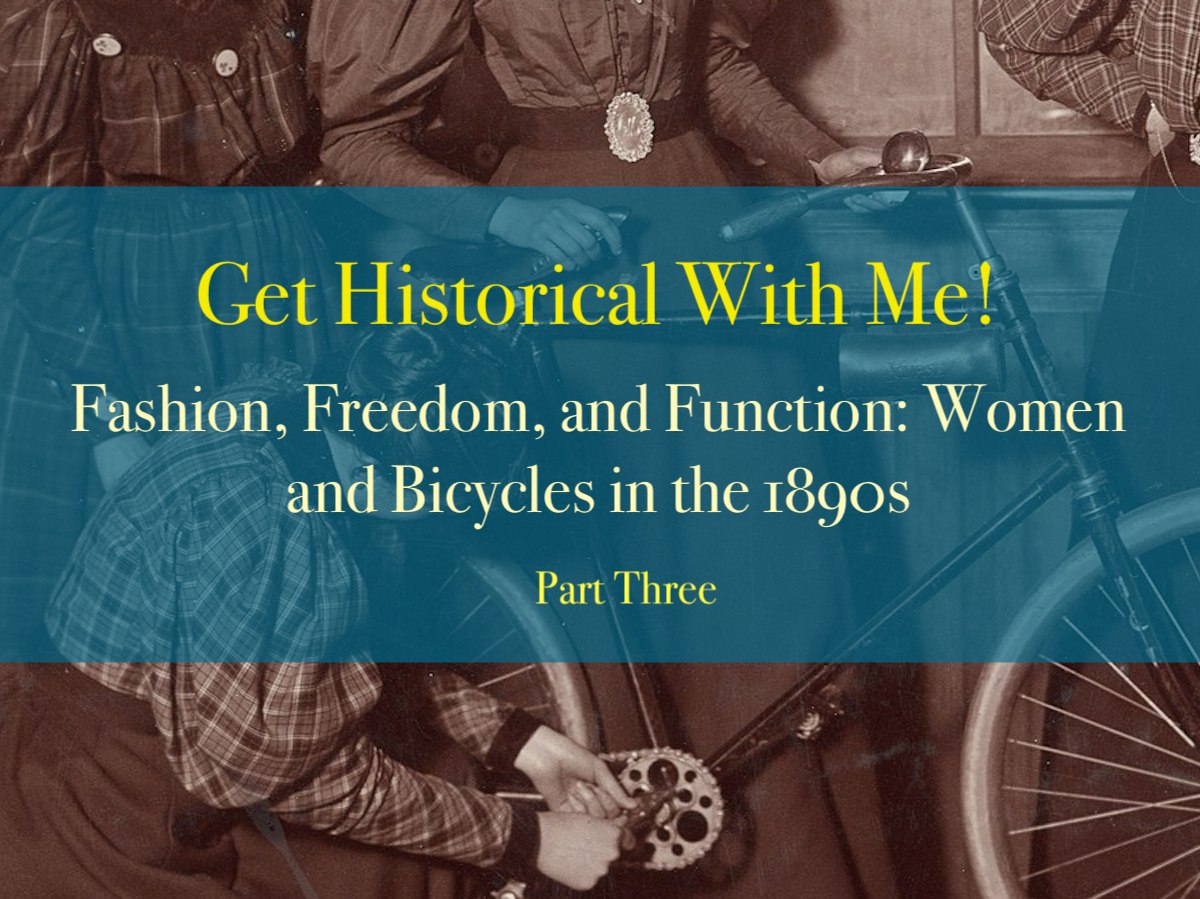 We’ve seen how the bicycle developed into a tool that women both found useful and enjoyed, and we’ve seen some of the obstacles to riding and how women overcame them. What were some of the cultural impacts of women and bicycles at the time? That’s the subject of this concluding part of my series. Be sure to read part 1 and part two of the series as well!

The advertising aimed at women surrounding bicycle culture is evidence of the type of consumer culture around bicycles. Fiction also shows that having a bicycle was a symbol of social status. Female characters who can’t afford bicycles alter their clothing to look like riding clothes so that they will be accepted into society in more than one story, and in an H.G. Wells novel, a man who happens upon a bicycle has a wonderful day of freedom from toil and care. Eva Chen uses these as examples of conspicuous consumption, making her case that bicycles only offered leisure to the rich in her article “Its Prohibitive Cost: The Bicycle, the New Woman, and Conspicuous Display.” Between the costs of clothing, clubs, which were necessary in many cases to have safe places to ride, time to ride, and the bicycles themselves, which were around $100 in 1895, bicycles in the middle of the decade were certainly only accessible to the rich. Therefore, it’s easy to say they only benefited those rich people at the time, and Chen certainly makes a good case for this.

Even written within Chen’s article, however, are undertones of another story that can’t be ignored: the admiration the working class had for the bicycle, and their aspirations to own one. The era known as the bicycle craze is generally said to be in the 1890s, and after that, the price of bicycles plummeted because they were suddenly “out of style.” Bicycles could cost as little as $13 in 1899, making them both accessible to lower classes and not as desirable to those in the upper classes. While the working class at this time didn’t move up the societal ladder by owning a bicycle, it still granted them the physical benefits of exercise and gave them a mobility they hadn’t experienced before. History may not have paid as much attention to the people of this quiet (in the archives, at least) working class, as they weren’t as visible as those bourgeois flaneurs who demanded attention as they rode, but they benefited from it as well, not as a fad or craze but as an adjustment of social norms. The craze worked as a device to normalize bicycling. Had the upper class not gone through the criticism and endured the scoffs, the lower classes might not have gained the access to bicycles that they did. The fact that the bicycle only became accessible (both financially and socially) to the working class through the upper class is worthy of scrutiny beyond the scope of this article, but it did serve a purpose. Women of the working class did benefit from the bicycle, and it did serve to emancipate them. Today, we take things like exercise and moving around outside of our neighborhoods for granted, but there were many people in the nineteenth century who had never experienced these things.

At the time Susan B. Anthony made the statement quoted at the beginning of this series, “women across the country were enjoying the increased physical strength, geographic mobility, independence, and technical knowhow that came with mastering the safety bicycle,” says bicycle and gender scholar Sarah Hallenbeck in her article “User Agency, Technical Communication, and the 19th-Century Woman Bicyclist.” Bicycles liberated women because for the first time they moved freely by way of their own effort. They steered the bicycle. They pedaled and controlled the speed and direction. If they read the manuals that were available, they could repair their own bicycles and be self-reliant. Yes, it may have been that the rich could afford bicycles and the poor might only dream of owning one, but it was an attainable dream for many. The women’s bicycle craze wasn’t about transporting one’s self from one place to another, ease of getting to work, or going to visit friends, though certainly those came with it. It was about a woman having agency for herself, having control over where she was going, and even having control over her own body in the form of exercise and making herself stronger. Women who never got exercise before were becoming healthier. Even women who worked, that we might think of as being more fit than those in their homes all day, only moved in the certain ways their jobs required, and bicycling offered a way for them to keep fit as well.

The fad of bicycles, in the form it took in the late nineteenth century, may not have lasted long, but the sense of empowerment women experienced from riding bicycles did. One could argue that the bicycle craze increased women’s self-confidence to a point where it became collective in a way. Even though most of the women who took part in the craze might have belonged to the upper economic classes, they were still, in the end, women, and allowed for others to see possibilities. For many of the upper class women, this may have been an unintended consequence, but it was a consequence all the same. Once the price of bicycles plummeted when the craze was over, more women were able to afford bicycles, and they received the same benefits of those who rode before them.

“The woman who put on divided skirts and took to the road on her ‘safety’ gained not only independence but a measure of health and a sense of well-being that her neurasthenic sister of earlier decades might have envied,” says Patricia Marks in her book Bicycles, Bangs, and Bloomers: The New Woman in Popular Press. She goes on to say, “…the woman on a bicycle represents both activity and options; the woman on wheels may decide where she wishes to go and what she plans to do when she gets there, regardless of a male companion, or lack of one. Her influence upon the world is more immediate; no longer confined to the home or hoping to escape from the vicissitudes of earning a living, she actively seeks new experience and intends to have some impact on the world around her.”

Whether or not a woman could afford a bicycle, whether or not she was physically able to ride, and whether or not she was in a social position to do so, the very fact women of the time could see their sisters doing so would have had a deep impact on their sense of ability and potential. The woman on a bicycle had become a symbol of freedom for women, whether they actually rode or not. And so bicycles may well, as Anthony said, have done more for the emancipation of women than anything that came before them.

I hope you not only enjoyed this series, but are inspired to learn even more!

Sue Macy, “Wheels of Change: How Women Rode the Bicycle to Freedom (With a Few Flat Tires Along the Way)”, National Geographic Kids, 2017.

How Often Does the NYSE Close and Why?