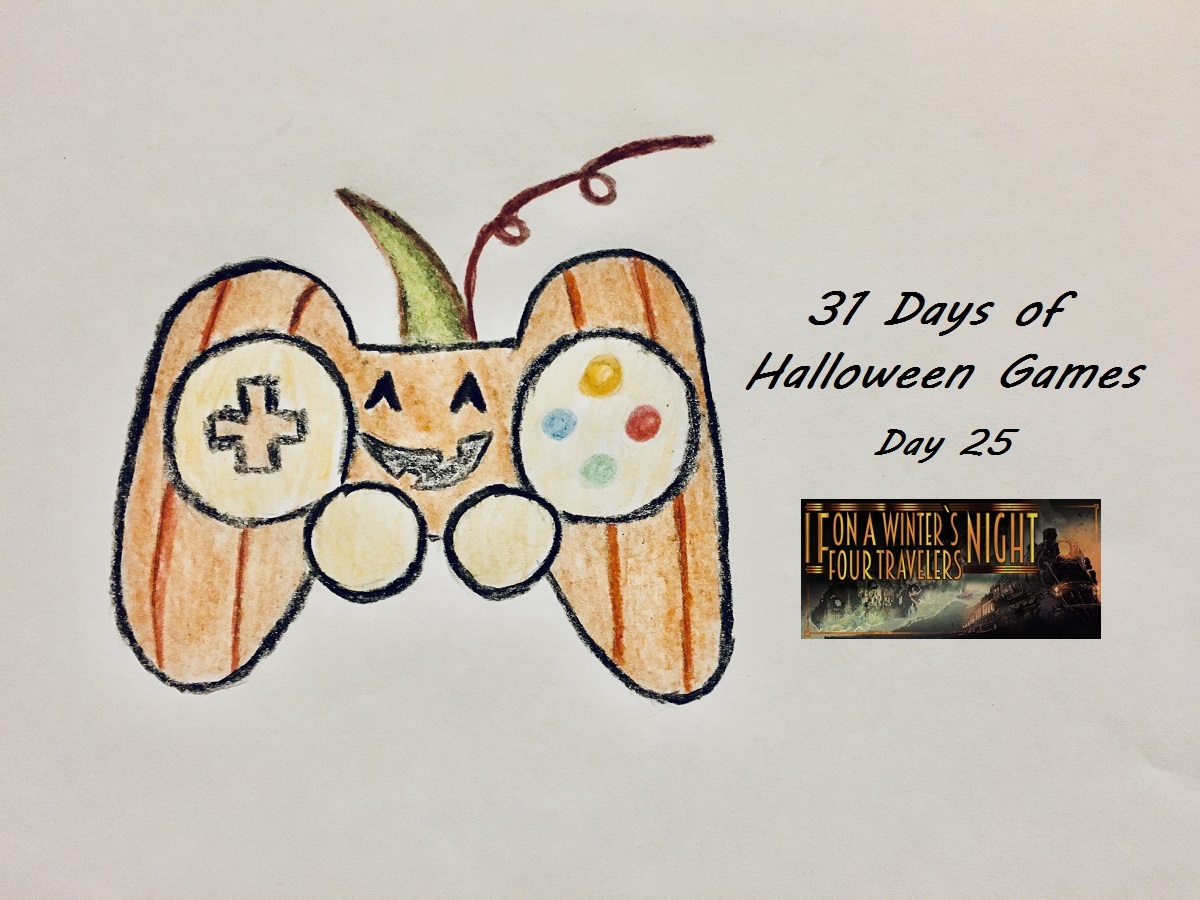 We are in the final week of our Halloween Game reviews and what a ride it has been! Such a wide range of genres, design, and storytelling. Each one pulls away the veil to show us a little of what Halloween and video games mean to them. It has been a journey, an adventure. And we’re not done yet. If anything, today’s game continues the journey. One more leg, divided into three parts with four strangers. On Day 25, we shall take a train ride to see what happens: If On a Winter’s Night Four Travelers.

What is If On a Winter’s Night Four Travelers?

Some may be familiar with the novel written by Italo Calvino in 1979, If On a Winter’s Night. It is a postmodernist narrative about a reader trying to read a book called If On a Winter’s Night a Traveler. I have not read it myself but I have heard of it and it sounds both weirdly amazing and uniquely fascinating. The video game, If On a Winter’s Night Four Travelers is inspired by the novel, delving into similar themes such as “no matter how complicated a situation is, when it is solved, you are back where you started”. 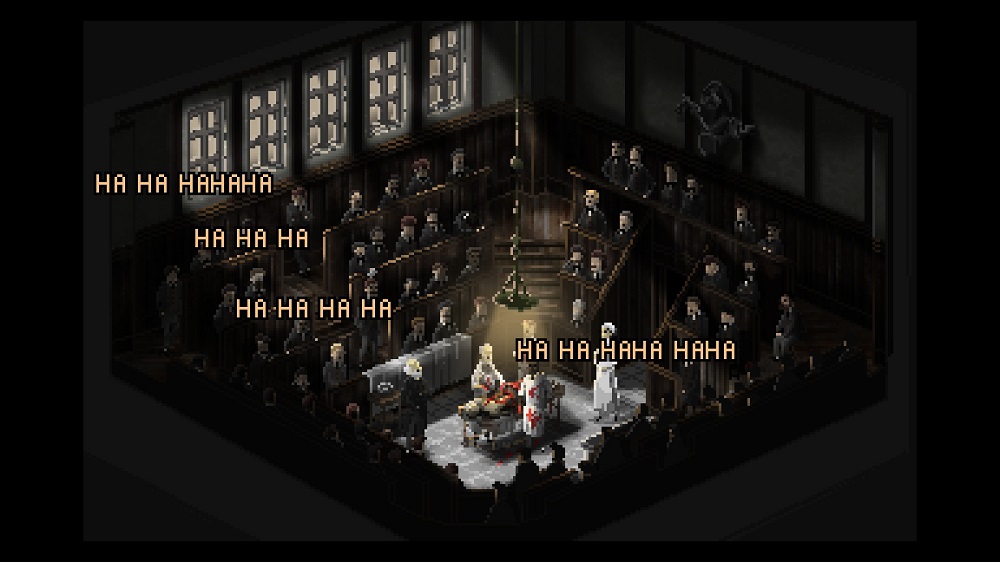 The game begins on a train. It is 1929, somewhere in Central Asia, and it indeed looks like a wintery night. The graphics are pixelated but in that beautiful way to enhance the atmosphere while removing the intense detail (important when we hit some rather horrific scenes in the future). At first, there is one traveler who suddenly arrives at a masquerade party on the train; unsure of why he is here or what happened beforehand. It unfolds as a three-part story, told through selective dialogue and hinted clues. It feels like you fall from one chapter to the next; from romantic tragedy to great emotional loss and despair, and finally the dive into utter gothic depravity and disregard for oneself. By now, I’m sure you have figured out this is not for the geek kids. This is the video game for Geek Moms (and Geek Carers) who are more of the literary and puzzling kind. Who may not think video games are really for them… but simply haven’t found the right medium yet.

Tell Me a Story–And Make It a Good One

The best stories are slowly teased out with curiosity and anticipation. Clues are scattered around the scenes like breadcrumbs. Each piece gradually fleshes out the story (or pulls back a layer, depending on which way you look at it). None of it takes away from the storytelling and for that, the puzzles are very gentle in nature. A clue might be left in a book reference but then discovered with a ‘Eureka!’ moment by the clock. At times, the details can be very small; I was stuck with the right sequence to explore the conservatory for a while. However, in most cases, it is a matter of observation and intrigue that will bring you out of the hole.

Fair warning, though: while the puzzles are gentle, the context of the stories is not. These are some deep level gothic vibes going on here. Each story is filled with memories and self-identification, leading to some serious ethical questions. Homophobia in the 1920s, PTSD and war trauma, depression, euthanasia. There are plenty of big thoughts and big feelings to be had here. If any of these or the game itself raises concerns or thoughts for yourself, please reach out to someone you can trust or an organization with the skills and services available to help you.

While the storytelling is smooth and compelling, this is lifted even higher by the most amazing atmosphere I have ever experienced from a seriously pixelated game. There were times when I might notice a character’s eyes had changed from black to white and HUZZAH! I noticed the difference! But seriously, this game is an absolute treasure-trove of detail and immersion. Lighting and shadows and colors dance across the dioramas. My favorite of the stories was “The Slow Vanishing of Lady Winterbourne”, with the play of light to share the two sides of the story. The rain on the windows was so beautifully textured and there were times I thought I could see the actual dust resting on the drop sheets. Weird, I know, but the game was that immersive.

The most surprising thing for me about this game was how quickly the time passed. The game is two hours long (approximately), and it draws you in. I initially thought I’ll do the first chapter and see how it goes. I had to stop for dinner with the family but all the time I was thinking about If On a Winter’s Night Four Travelers. I rushed back to the computer to finish the game and now part of me wishes I hadn’t–rushed it, that is. I really wish there was just one more story. It was that good. 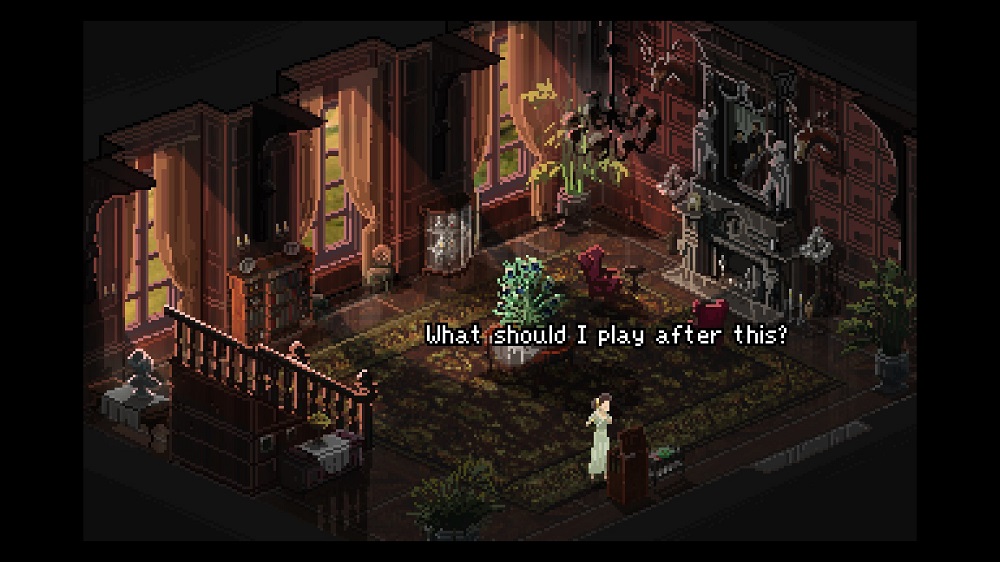 I will point out again, this is not a game for the kids. It is not just horror in graphics or storytelling. It is true gothic in the depths and darkness of its context. It is more than death and romance and brooding. There is an introspective questioning of how you would be in the same situation. If anything, I really appreciate the insight it gives to suicide at the very end of the game. With all of this, I still think it is one of the most amazing gothic games I have played and perfect for our Halloween Game Reviews. These games just keep getting better and better!

If On a Winter’s Night Four Travellers is available for free on Steam and ‘name-your-price’ on itch.io. No further compensation was received for this review.

Score: 5 out of 5 Masquerade Invitations 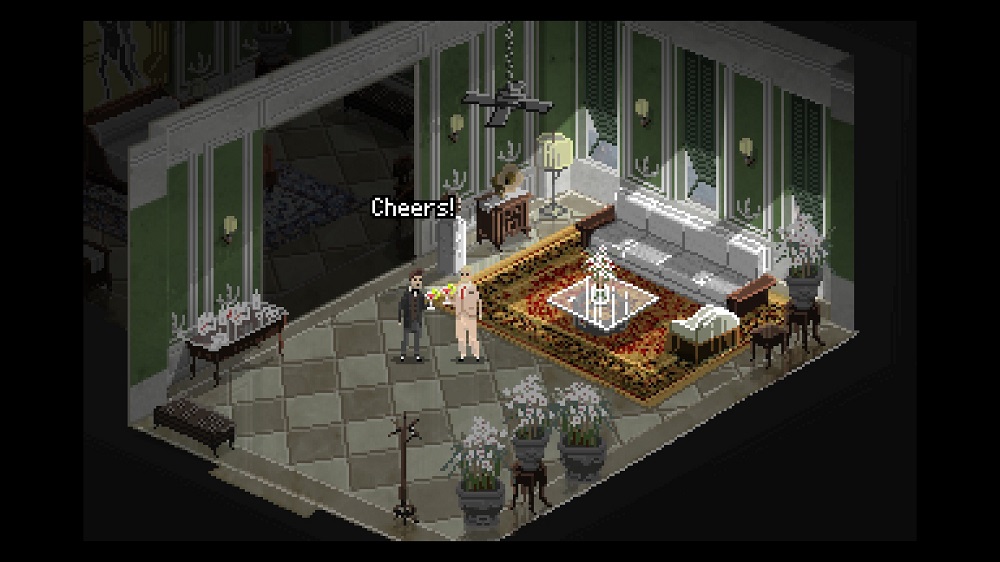 If you like gothic-themed games, check out Day 15: Wytchwood and Day 5: Black Book in our 31 Days of Halloween Games.