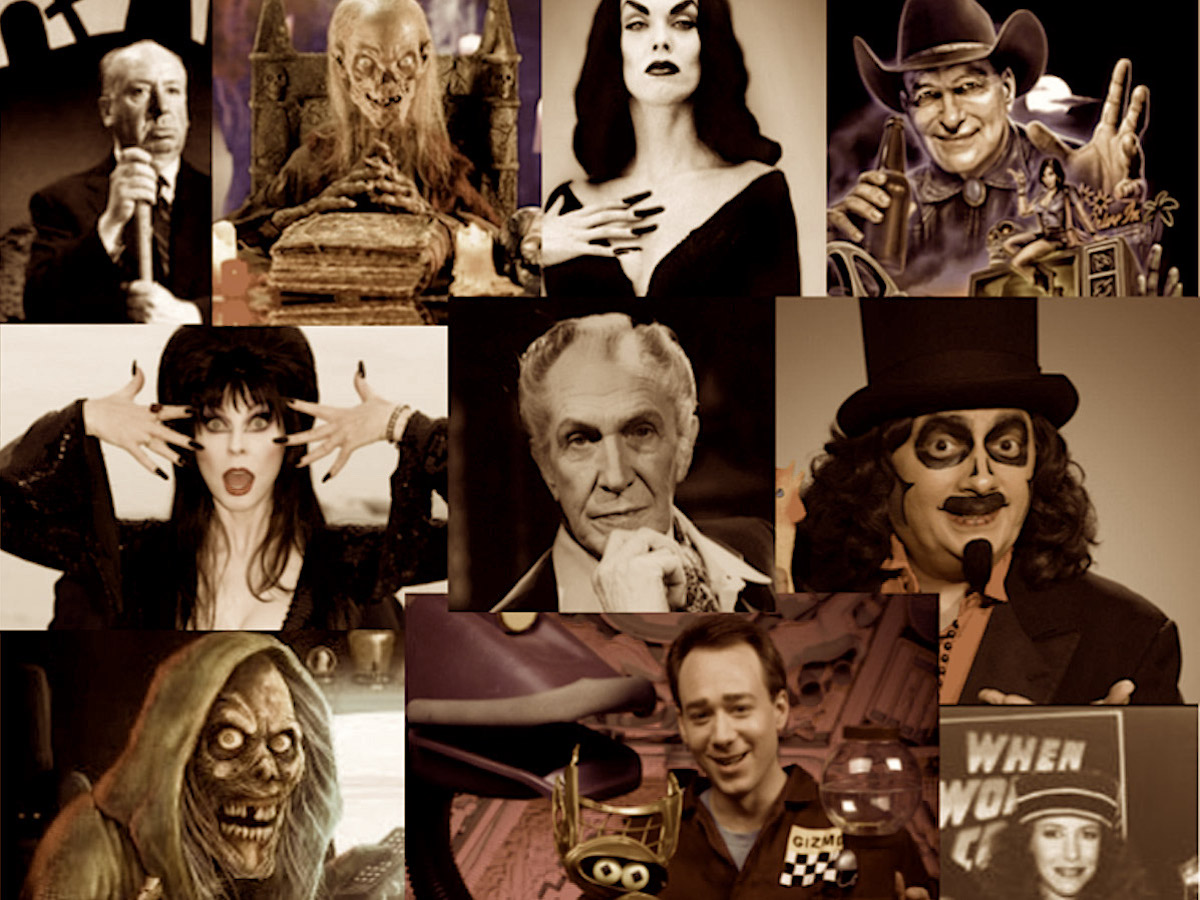 From Elvira’s bestselling memoir to the Joe Bob Briggs interviewing the team behind the box office hit Halloween Kills, the haunting hosts of horror are really getting noticed this year.

With Halloween only a few days away, it seems eerily appropriate to share some random and geeky facts about some of our favorite monster hosts through the years.

1. Elvira, Mistress of the Dark (aka Cassandra Peterson) released her very intimate and revealing memoir, which debuted last month at number 4 on the New York Times best-seller list in conjunction with the 40th anniversary of the character. This isn’t the only new read for Elvira fans this year, as September also saw the debut of her crossover comic book, Elvira Meets Vincent Price from Dynamite Comics.

2. Elvira’s first big show was Movie Macabre with Elvira, Mistress of the Dark from 1981 to 1986, where she developed her signature sassy Valley Girl style and sarcastic humor. One of the show’s frequent off-air guests was a character called “The Breather,” played by John Paragon who later portrayed Jambi the Genie on Pee Wee’s Playhouse. This year, also in celebration of her 40th Anniversary, Shudder television debuted Elvira’s 40th Anniversary Very Scary, Very Special Special four-movie marathon, which includes her 1988 feature film Elvira: Mistress of the Dark.

3. Before having her own series, Elvira’s first appearance was briefly taking over a show called Fright Night six years after the original host, Larry Vincent (Sinister Seymour), passed away. In addition to being a SoCal horror television icon, Seymour was the original “Ghost Host” for the inaugural Knott’s Scary Farm Halloween haunt event in 1973. His spirit returned 45 years later for the digital age with a talk show-style YouTube series called The Sinister Seymour Show. Taking over the mantle of Seymour is an actor named Kaleb Hull.

5. The horror station Shudder is also the home of another longtime horror and B-movie host, the unapologetic redneck Joe Bob Briggs. His series The Last Drive-In with Joe Bob Briggs is now in its third season. From his various hosting, writing, and producing on shows like his MonsterVision and more, he has clocked in more than 20,000 hours of broadcast television work.

6. Joe Bob began his humor column and “drive-in movie” reviews in 1982 for the Dallas Herald with his first essay, “Why God Created Drive-In Movies.” His real-life alter ego, career journalist John Bloom, was revealed in 1985. In 2011 he was even nominated for a Pulitzer Prize by United Press International for his eyewitness coverage of 9/11. Pretty respectful for a “drive-in” critic.

7. One of the pioneers of the horror hosts is horror and television legend Vampira, actress Maila Nurmi. Although her original series, The Vampira Show, only lasted from 1954 to 1955, she inspired generations of actors, musicians, writers, and similar horror hosts. She is credited as being television’s very first horror host, and her persona was a blend of Morticia Addams, Dragon Lady from the comic strip Terry and the Pirates, and the evil queen from Snow White. She was even the live-action model for the Maleficent for Disney’s 1956 animated classic Sleeping Beauty.

Here’s a peek at her show’s original opening. It’s a “scream”:

7. The most well-known voice for the Cryptkeeper, the king of darks humor and corpselike host of the Tales from the Crypt series, was voice actor John Kassir. He hosted the 96 episodes of the horror anthology show, plus its feature films from 1989 to 1996, then again for a short run in 2000. Kassir’s voice may be well known for this creepy creature, but his countless voice credits include cuddlier characters like Scrooge McDuck for the 2016 Mickey Mouse shorts and the sounds of Elliot from the 2016 reboot of Pete’s Dragon.

8. One of Saturday Night Live’s original alumni had her own horror host stint for one year, Loraine Newman. Newman’s Canned Film Festival lasted only 13 episodes in 1986 and took place in an old theatre in the fictional town of Limekirk, Texas. It blended the showing of old horror movies with a regular plotline, as Loraine played a theatre owner trying to revive the old theatre by playing these not-so-classic films

9. Horror legend Vincent Price served as host of the PBS anthology series Mystery! from 1981 to 1989 when he was already in his 70s. He took over from movie reviewer Gene Shalit, who only hosted the show for one season. When his health began failing in 1989, he had already hosted more than 217 episodes. He stepped down with actress Diana Rigg taking over. Through all these hosts, the show’s famous opening continued to feature the art of macabre artist Edward Gorey animated by Derek Lamb and others.

10. If the Creep, from the anthology movie Creepshow, seems familiar, that is because Creepshow’s comic book style was inspired by EC comic titles like Tales from the Crypt. The Creep even bears a pretty close resemblance to the Cryptkeeper. The Creep takes many forms in the three movies, comic book adaptations, and recent streaming television series, such as a hot dog vendor or a mailman. The Creep seen in the window in the first film isn’t played by an actor but is probably the most frightening. He was built around the frame of a real human skeleton.

11. The Chicago area host Svengoolie (a mash-up of the words svengali and ghoul) was created in 1970 by Jerry G. Bishop and is now played by Rich Koz. He can be seen nationally on MeTV and is known for his often cringe-worthy humor, parody songs, and sketches when introducing a show. One repeated gag is having rubber chickens tossed when a joke bombs. These chickens became a big part of a special four-part DC comic book adaptation in 2019 where the horror host meets the Justice League.

12. “Good evening.” Prolific director Alfred Hitchcock only directed about 18 of the 267 episodes of his long-running horror series Alfred Hitchcock Presents. Hitchcock shot two versions of the intro for each episode, one with jokes geared towards American audiences and one for European audiences. The show was renamed Alfred Hitchcock Hour when its running time was extended to a full hour.

13. Of course, we can’t talk about great horror and sci-fi hosts without mentioning the creator and original passenger of the Satellite of Love, Joel Hodgson of the Emmy-winning Mystery Science Theatre 3000 (MST3K). As is mentioned in the title, Hodgson, a prop comic prior to creating the show, actually did build his robot friends in an all-nighter prior to the show.

What are these bots made of?

Tom Servo has a Carousel Executive Snack Dispenser (gumball machine) for a head, a barrel-shaped coin bank and toy car engine block for a body, and a Halloween “boo bowl” for his base.

Crow T. Robot’s head is a plastic bowling pin split in half, lacrosse face mask webbing for his “crown,” and ping pong ball eyes placed in a soap dish. His body is two Tupperware panels, and the whole thing is painted gold. The T in Crow’s name, by the way, stands for “The.”

There is still some time before Halloween to tune into your favorite horror host, but in the meantime, here are the famous Satellite of Love bots themselves in some “leaked” audition footage for Star Wars made as part of a crowdfunding campaign. 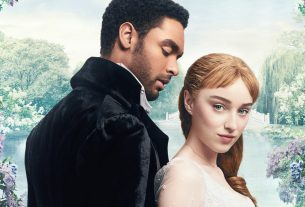 Fun Regency Era Facts for Those Obsessed With Netflix’s ‘Bridgerton’

A Cheat Sheet for Using the Dewey Decimal System