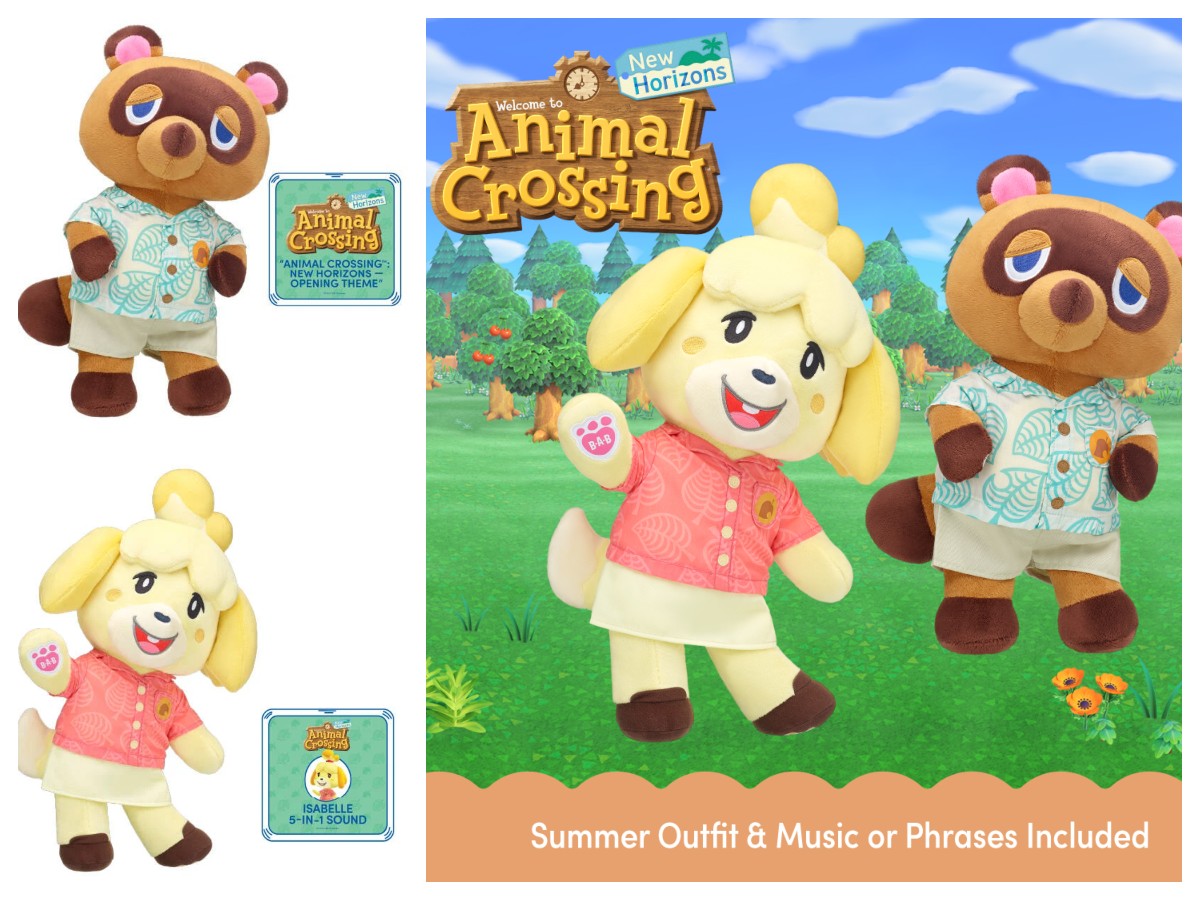 Like many families, mine spent a decent chunk of time in 2020 building and living in our Animal Crossing: New Horizons village. We were pretty involved community members from March to August, with participation peaking again during special events. They have done many things to sustain our interest: Nintendo-themed items for sale, the return of Egg Day, and this week, the release of a line of Animal Crossing: New Horizons stuffed animals at Build-A-Bear Workshop.

Somehow I missed the first announcement of this earlier in the year, but on Monday when they announced that the release would be on Tuesday and I could get in a virtual line, well of course I signed up.

There was much speculation in my house as to which characters would be available. While my 11-year-old longed for K.K. Slider, I myself was hoping for Flik, or maybe even Celeste. Oh, if I could wish upon a star. Everyone else wanted Timmy and Tommy. Both Build-A-Bear Workshop and Nintendo kept a tight lid on the exact animals being released this week, but when the digital queue went live, so did a video of the first animals being stuffed.

So it was to be Tom Nook and Isabelle. It makes sense. These stalwarts of the game are the first thing you see, and Isabelle is certainly one of your most consistent interactions. I got in line at 10.30am PST, for a store opening of 11am PST. Virtual ticket in hand, I went about my day.

When the store opened I received notification that my wait would be over an hour. Undeterred, I have a computer-based job, and could keep the ticker running off to the side of my screen. I was in the middle of a zoom call when the number finally dipped below 60 minutes, and I impatiently waited for my call to end, and my ticker to plummet ever lower. 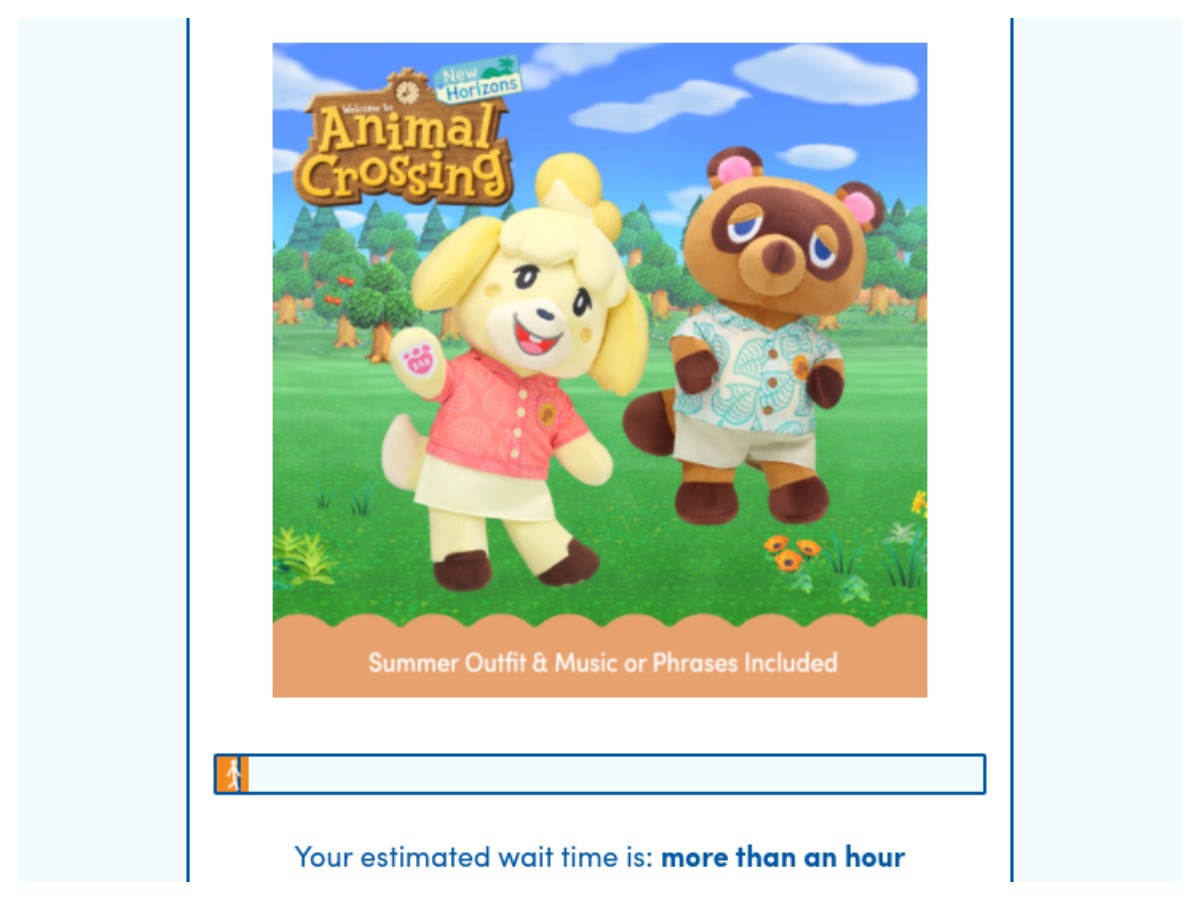 It got very exciting at around the 11 minute mark, which was about 3 hours into my total wait time.

After seeing Tom Nook and Isabelle I had spent all morning wondering if that was it. Just those two? Or were they simply the ones being shown to folks in the waiting room? Once I arrived at Animal Crossing Nirvana would I find a whole host of characters to choose from? My imagination ran wild as I watched the marker reach 11 minutes. Then 13 minutes? Then 28 minutes? 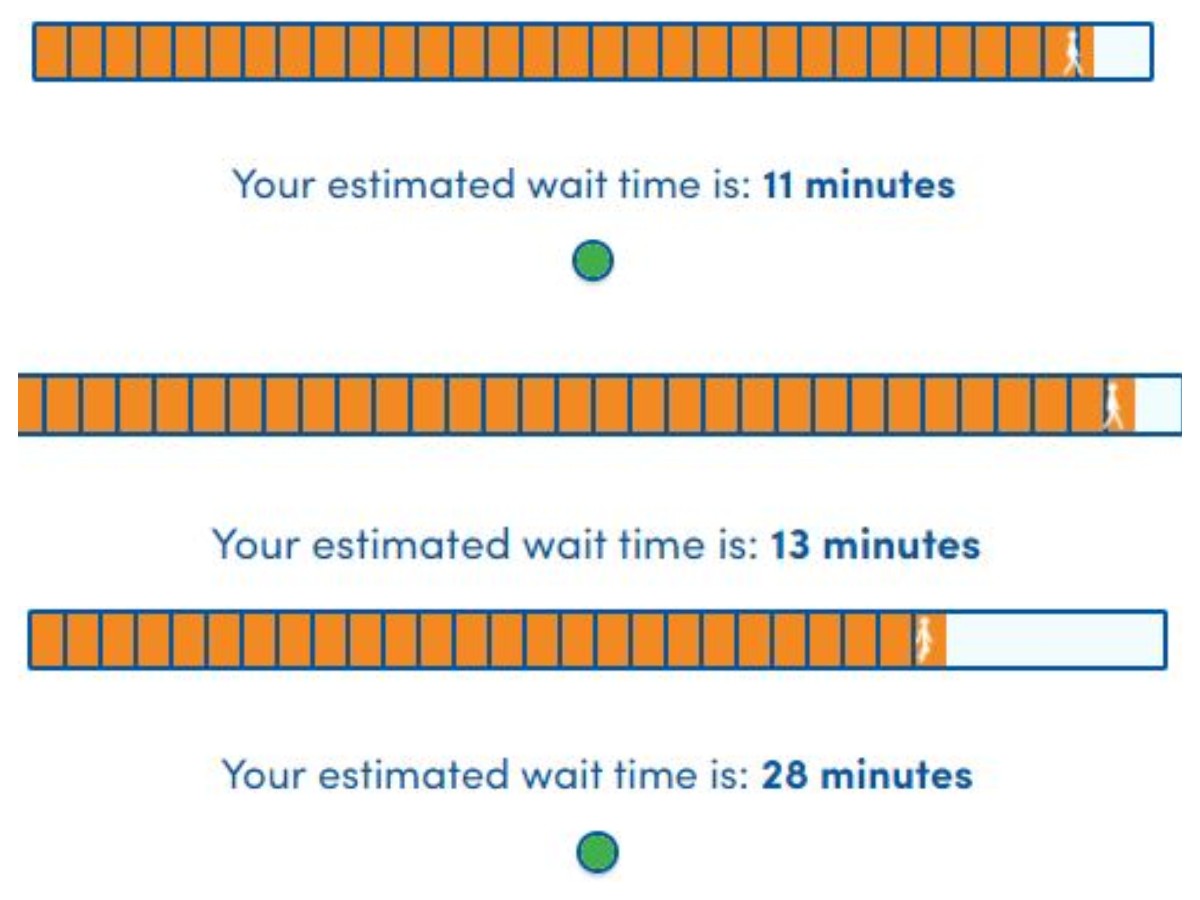 My face changed from one of tense excitement to apprehension and disappointment as I watched the screen begin to change, until the update I never expected. 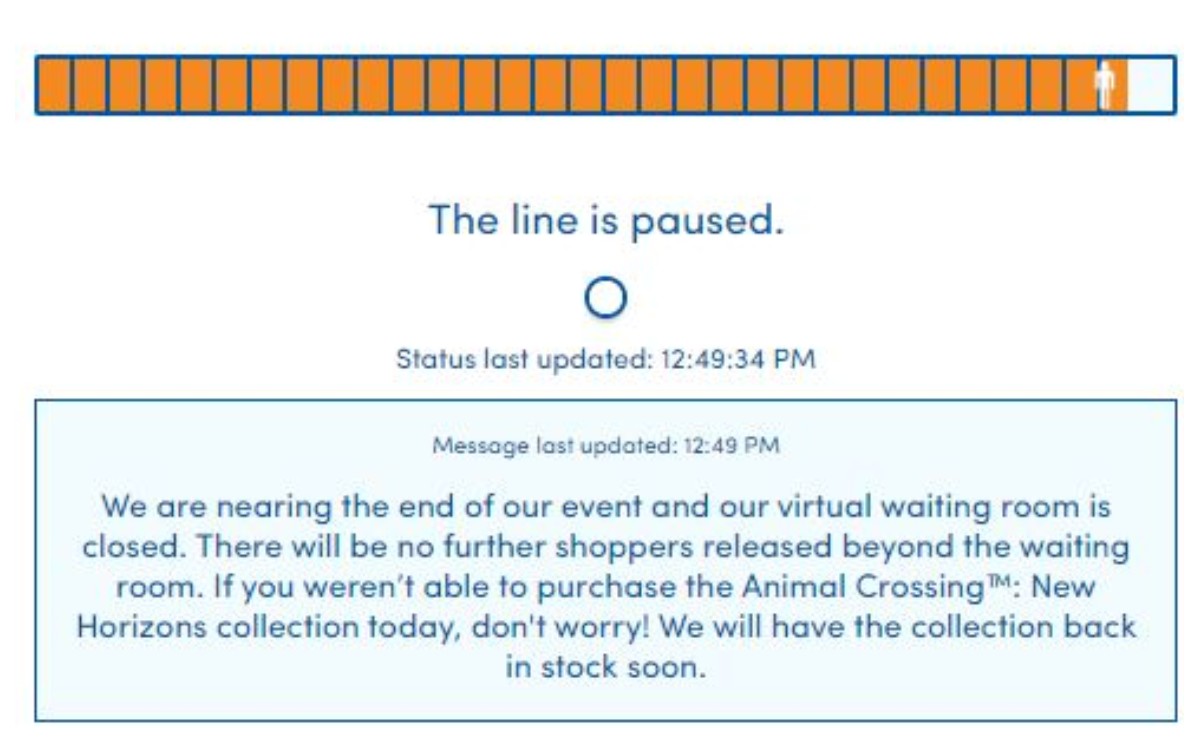 “The line is paused.” What on earth does that mean? Is the site broken? Am I next? Are they sold out? About five hours later (two or three minutes in real time) the site refreshed and I was greeted by a giant “Coming Back” banner telling me to sign up for notifications of Tom and Isabelle’s return. Sold out while I waited in line.

Knowing that they will be in stores this summer helped to defuse my disappointment, but then I played the audio clip of their sound device again, and the lamentations began anew. For those of you who just can’t wait there is the mynintendo competition to win the set. There are five prize packages, and you can enter three times. 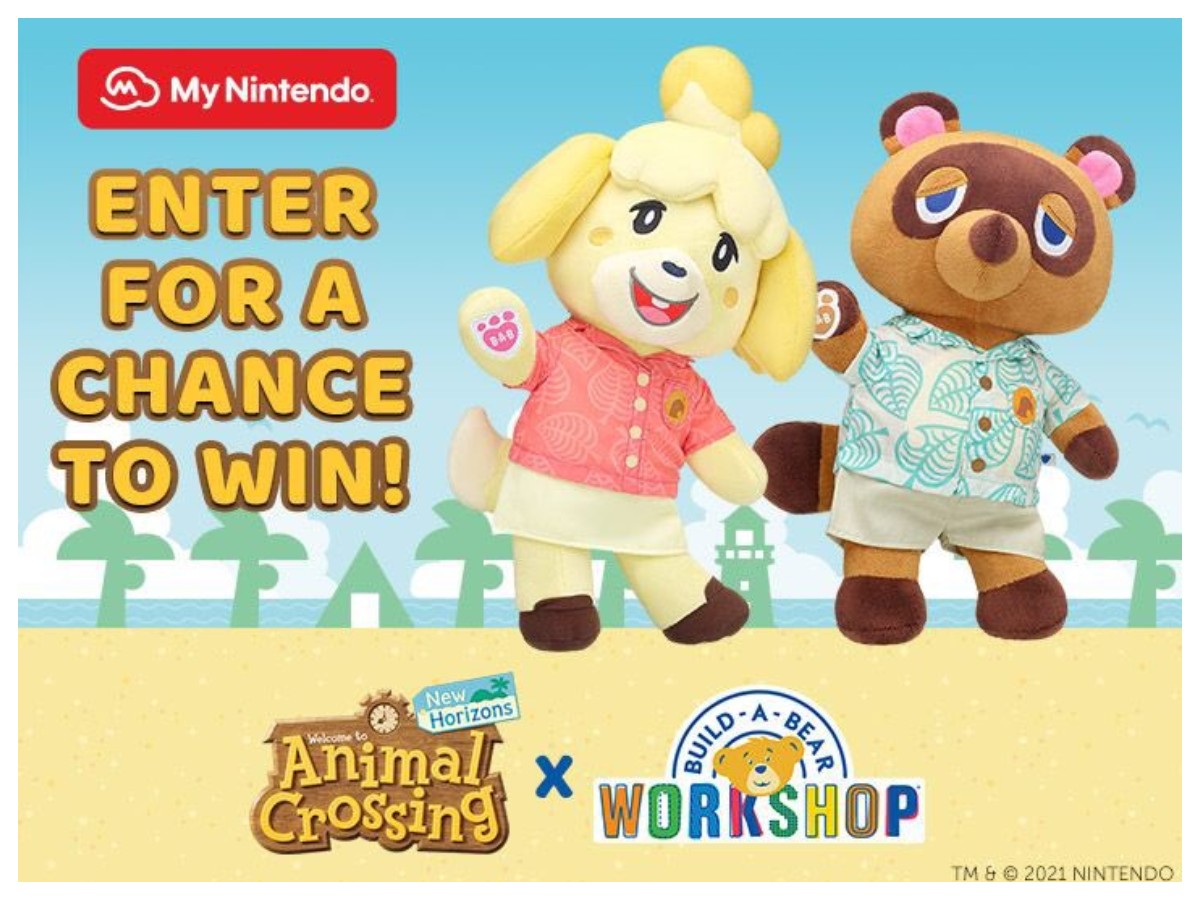 When my son got home from school, I had to tell him that not only was there no K.K. Slider, but that we didn’t have either of the stuffed animals. He was completely regret-free. He would much rather wait for the summer and go to Build-A-Bear Workshop in person, and I quote “It’s more fun to go there together anyway.” Wiser words were never spoken.

I retain a little of my disappointment, but I am looking forward to a summer trip, maybe even with Animal Crossing masks. However I do find myself getting angry at the opportunists again. Much like the people who bought up so many Happy Meal Pokemon cards that kids in some parts of the country couldn’t get hold of them, Tom Nook and Isabelle are already on eBay. There are dozens available, and each is selling for over $100. These sellers don’t even have the toys yet, and they are already for sale. Heaven forbid we let a kid, or a fan, get hold of them at retail price. I know this has been a thing for well over a decade, but there’s still something about it that leaves a bad taste. Maybe this summer I’ll be able to wash that bad taste away with a recipe or two from my own cuddly Franklin. 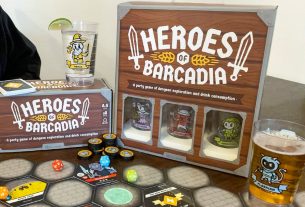 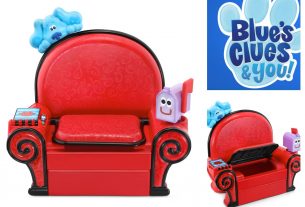 Having a Blue Christmas With Blue’s Clues