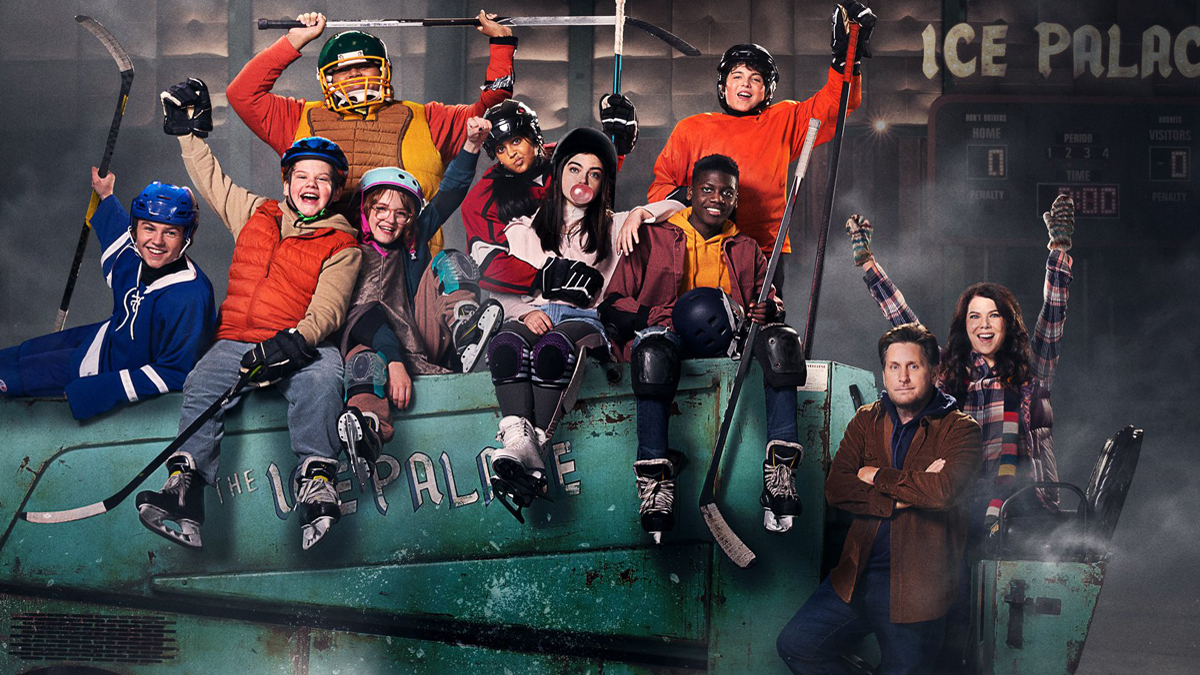 As a child of the ’90s, one of my most beloved franchises was that of The Mighty Ducks, the peewee hockey team of underdogs coached to victory by Coach Gordon Bombay (Emilio Estevez). The two boys next door even found an ice hockey league to join despite the fact we lived in Southern Arizona. I did not join one myself, but quite a few afternoons were spent playing street hockey with the kids next door and the stucco on the side of their house took permanent damage from numerous slapshots and attempted knucklepucks.

I had already shared the original movie with our older kid, but I was definitely curious to see what Disney+ had in mind when they announced the next chapter of Ducks’ Legacy would be in form of a TV series with Emilio Estevez returning and Lauren Graham being added as the mom of what would likely be the “Charlie” of the team.

Spoilers for the first two episodes of The Mighty Ducks: Game Changers follow.

The original Ducks were a group of kids who had to get a sponsor to afford real rink time and equipment except for Adam Banks, the one affluent kid who ended up a Duck to a boundary redraw between seasons. They were a group of misfits full of shenanigans that Coach Bombay eventually learned how to harness in productive ways. The new Ducks are a very different team. The Ducks are now a peewee powerhouse with a stadium put up by Hendrix Hockey, the same company that sponsored the Ducks in the Jr. Goodwill Games in D2. Adam Banks was frequently called “cake-eater’ for being the rich kid amongst the Ducks, but these kids are like cake-eaters who can only eat Pinterest and Instagram worthy creations because anything else would be beneath them. Thousand dollar summer clinics, 6:30 AM practices, personal trainers, pediatric sports psychologists, and college counselors for 12-year-olds is how the Ducks play the game now. They also, horror of horrors, no longer quack. The overinvolved helicopter sports parents have invaded the Ducks and the new coach, Coach T, is clearly catering to these parents who pay him to win instead of letting the kids have fun. Sofi, one of the most talented Ducks, has been pushed the point where she’s having knee pain and there’s a sneaking suspicion that she is one bad day on the ice from potential permanent injury.

It is here we find our new protagonist, Evan Morrow, and his single mom Alex (Lauren Graham). Alex believes kid sports should be you know, fun. She’s a paralegal who dropped out of law school after she became pregnant with Evan (Evan’s father is not in the picture). While her boss Stephanie has twins on the Ducks and has hired both a personal trainer and pediatric sports psychologist for them, Alex is the mom who didn’t get Evan signed up for the summer clinics because she logged on ten minutes after they opened up and everything was sold out. Evan is cut from the Ducks during the season’s first practice and Coach T shrugs it off, telling Alex and Evan that if you can’t be great at this point, don’t bother.

Don’t bother? Alex goes off on the kind of million-word-a-minute rant that Lauren Graham perfected during her days on Gilmore Girls. She absolutely salts the earth by calling out every obsessive and ridiculous action the parents have taken especially considering that zero of these kids are ever going to play pro, and then punctuates it by telling Coach T “You don’t bother, Sir!” The rant is recorded by one of the twins and between that and being cut from the Ducks, Evan’s middle school social life is obliterated when the rant goes viral.

It isn’t long before Alex starts to feel bad about the rant and Evan losing hockey, but what if he could have a team where kids were allowed to play hockey for fun? Once she finds out she only needs six kids and a home rink (although she needs them in three days), Alex is off.

At first, the attempts to recruit anyone other than Nick, the hockey loving podcaster from next door and Logan, a kid who just moved to Minnesota from Canada and owns $900 ice skates but can’t actually skate isn’t quite enough. Alex also finds rink time at the Ice Palace, a dilapidated facility owned by none other than Gordon Bombay who drops his iconic “I hate hockey, and I don’t like kids line.” Clearly there has been some sort of falling out with him and the sport, and I have a feeling the era of the Overzealous Sport Parents are probably to blame. Alex gets him to agree to host the new team once she lets him know she found enough money from the city for youth hockey to help keep the Ice Palace going. It’s not long before Evan recognizes Bombay, but our beloved coach is absolutely not getting involved.

Until he sort of does. At one point, he calls out the new Ducks for being ridiculous, but also calls out Alex for trying to swoop in and fix every situation for Evan. If Evan wants to play hockey, he’ll find a way to make it happen. He also tells Evan that while the viral video is embarrassing and Alex has made a few fumbles, that she really does care and to sort of back off of her a bit.

The Bombay talk seems to do the trick. Evan pulls in a few more players: Koob, who is an excellent video game goalie; Sam, the daredevil; Maya who is exhausted with trying to stay popular; and Lauren the Magic: The Gathering player who dresses like a warrior princess but feels she has some inner rage to channel. It’s a line-up that’s starting to feel like the spirit of the true Ducks is still lingering out there somewhere.

The new team, which Alex named the “Don’t Bothers,” hits the ice for Team Day, a giant kickoff with grand entrances, music, and pyrotechnics as if we needed another reminder at how much the game has changed. The kids are also reminded that this is the 12 to 14 Division and the game is now full contact.

The challenges have only just begun, of course. Alex is not really coach material and wants to get so far away from the high-pressure Duck attitude that practice is not really very practice-like. Evan even calls it a “sleepover with a puck.” There’s no drills, and while Coach Bombay had fun activities that doubled over as skill building, Alex’s activities feel so disconnected the impression is that she’s a running a playgroup for middle schoolers on an ice rink. Most of the team doesn’t have solid equipment, although in one of his “so not involved” moments, Coach Bombay tells her the Ducks have a “Lost and Found” full of stuff. Apparently missing equipment never gets claimed and is just replaced without a second thought. The Don’t Bothers make a raid and Evan even finds a lucky hockey stick from two years ago tucked into the shelves and shelves of gear.

The first game goes worse than anything the original Ducks ever faced back when they were still District 5. Alex isn’t too fazed, after all they didn’t expect to win and it’s all about fun. Evan shoots back that losing this way is not fun. While the desire to pull the toxic behavior and attitudes out is a noble cause, Alex seems to have forgotten that the kids still want to actually play hockey. Evan starts leading the team in actual drills and Alex realizes she needs to step it up a bit.

We’ve really been enjoying the show so far with both of our boys and our older son gets especially excited for new episodes to drop. Even if the Ducks are more like the antagonists, there’s still enough Duck spirit for original fans to be pleased. I feel like the series also brings in a lot of good talking points about what is happening with some youth sports organizations right now. A quick Google search turns up more and more articles about Overzealous Sports Parents and their negative impact on youth sports. While it’s true that at some point in youth sports there will be a time where there are tryouts and not every kid will make the team, but at what age should that happen? At what point do kids who can’t or won’t pay for special clinics and trainers find themselves unable to continue participating in a sport? Is it worth running out the Coach Bombays for Coach T’s? How hard will it be to encourage kids to play in sports if they get told they have to either be awesome already or just “don’t bother”?