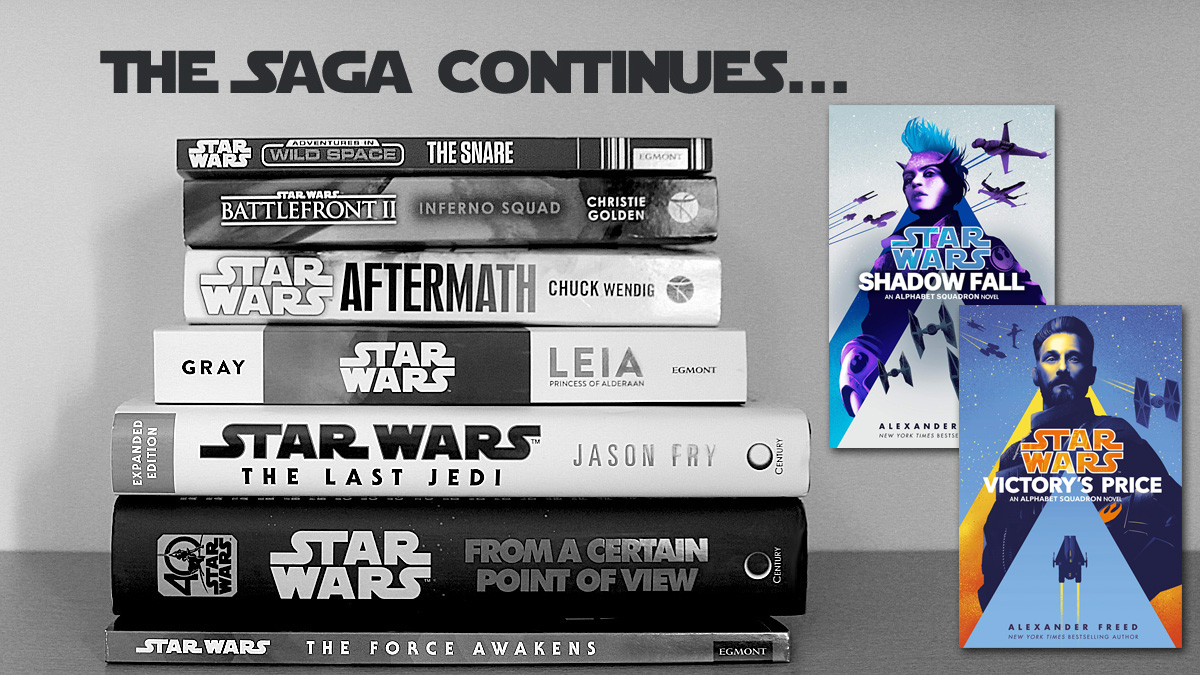 The second book in Alexander Freed’s Alphabet Squadron trilogy was somewhat lost in the chaos of COVID-19, but with the third and final installment having dropped last week, I took the opportunity to catch up and finish off the series.

Shadow Fall opens with both the New Republic’s Alphabet Squadron and the remnant Empire’s Shadow Wing reeling from the vicious attack at Pandem Nie. The pilots of Alphabet are determined to finally end this ongoing confrontation while those of Shadow Wing want revenge after the death of their leader Shakara Nuress.

With assistance from General Hera Syndulla, Alphabet leader and Imperial defector Yrica Quell and her mentor Caern Adan create a scheme to lure Shadow Wing out of the darkness on their own terms, but when things don’t go to plan, the squadron finds themselves thrown to the four winds. Chass is struggling with her drinking (she can stop whenever she likes ok?) Nath is wondering what’s left in this for him, Wyl just wants to return to Home, and Quell lives in fear of her team discovering the truth about her defection. Can they find one another again or is defeating Shadow Wing too much for these already strained relationships to handle?

As with Alphabet Squadron, I struggled with Shadow Wing. Rather than this being because the book was inherently “bad” – I don’t think it is – it was largely because I never really connected to the characters in the first book and thus I found it difficult to really care about the stakes they found themselves up against. Wyl is the only character I had any real affection for and even he comes across as something of a wet blanket in this second outing. When Quell finds herself face to face with a situation that literally forces all her nightmares to the surface, I found myself reading what should have been emotionally fraught scenes with almost total indifference.

I also found that the book had too much going on. The POV switches between at least five characters at random, often covering several per chapter, and particularly during the long sections of the book where almost everyone is separate, there’s just too many characters, plot points, planets, and other groups to keep track of. There were times when I even lost track of which planet a character was on, let alone what they were doing there. This isn’t helped by the way characters’ overall motivations are often hard to follow.

On the plus side, there was some really great writing here when it was given the chance to emerge. Freed gets exceptionally lyrical, especially for a book about fighter pilots, and his chapter titles, in particular, are practically poetic with titles such as “The Joyous Togetherness of Shared Suffering” or “The Illuminating Brilliance of Starlight”. I also started to like the droid character IT-O a lot. Apparently, I have a “thing” for droids with – for want of a better phrase – mental health problems because my favorite droid characters include D-O (The Rise of Skywalker), Mr. Bones (the Aftermath trilogy by Chuck Wendig), and 0-0-0 (Doctor Aphra), none of whom could reasonably be considered emotionally stable!

The third and final Alphabet Squadron book – Victory’s Price – finds the team shattered. Quell has seemingly re-defected back to her old Imperial squadron after learning that her former mentor – Soran Keize – is still alive, Chass is recovering from her time spent living with the Children of the Empty Sun cult, and Nath is trying to reconcile the person he knows himself to be with the medal-earning New Republic hero others see him as. Add to that the pressures the remaining team members still face from the remnants of the 204th Fighter Wing who have taken it upon themselves to continue Operation Cinder, and the very existence of Alphabet Squadron is holding on by a thread.

With the first anniversary of the Battle of Endor fast approaching, everyone is more than ready for the war to finally be over. The Imperials are gathering at Jakku and the New Republic is preparing for what they hope will be the last major battle of the Galactic Civil War. However, given that many troops have spent their entire adult lives fighting, there is also a lot of unspoken fear starting to manifest about what they will do next when their services are no longer required.

Alphabet Squadron will need to try and put their personal issues aside if they want to survive and face their uncertain futures because the war isn’t over yet and Shadow Wing doesn’t intend to go down without a fight.

While I still can’t count Victory’s Price among my favorite Star Wars books, I did enjoy this final installment of the Alphabet Squadron trilogy more than the previous two. There is a lot of complexity here – arguably too much given just how many characters we’re following – but I enjoyed the way the book explored the team’s conflicting emotions regarding the end of the war which feels tantalizingly close at this point in their lives. All of them want it to end, of course, as they have all experienced tremendous loss and live every day in the fear it may be their last. However, many of them don’t know what will become of them once it finally does end. This is explored in particular through Chass’ perspective and her nightmares about the future will seem relevant to anyone who is familiar with the work of veteran’s charities here on Earth. I was also interested to spot several sections with interesting parallels to real-world slavery, emancipation, and its aftermath, something that has yet to really be explored in the Star Wars universe.

However, this being my favorite book of the trilogy didn’t stop me from wanting to give every major character a firm slap multiple times during the book. They repeatedly made stupid and often totally unfathomable decisions that left me constantly confused about what exactly they were trying to achieve and what their personal motivations were. My previous favorite character Wyl made one decision that – while admirable for its principals – came across as simply cruel given its timing. The one character with whom I felt any affinity throughout was Kairos whose personal plotline was by far the most interesting but was also left with the least resolution so I do hope we get some further storytelling that follows her in more detail.

The final conclusion to the book and the trilogy as a whole felt a bit too… nice. That isn’t to say that “they all lived happily ever after” – far from it – and I can’t say much more without spoilers, but given the nature of the series as a whole, but I struggled to accept some elements of it which left me feeling someone deflated. 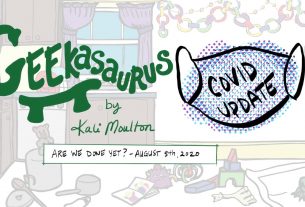 Are We Done Yet? – ‘Geekasaurus’

“The Curse of the Brimstone Contract:” A Steampunk Adventure, Part 20