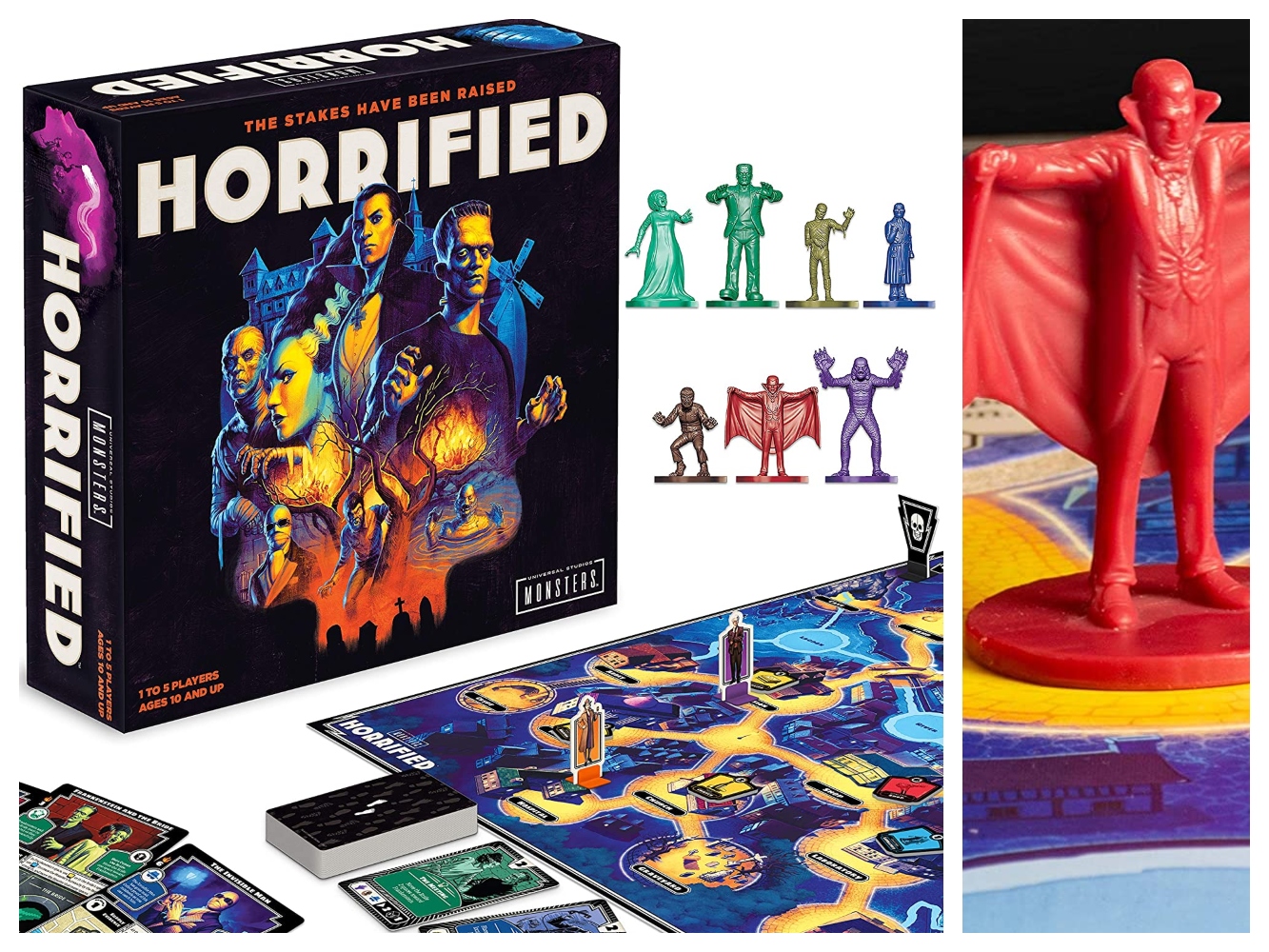 In our house, we are generally suckers for a good themed game. Munchkin: Disney Duck Tales, Monopoly Gamer Sonic the Hedgehog, if it’s a new spin on a classic we are all over it. When playing with the kids it’s a great way to build up their gaming repertoire. Each version tends to have a few good rule tweaks that exposes them to new gaming styles, and makes the next game they play that much easier to learn. When playing just us adults however, we enjoy something of a novelty, a game that is original in function if not form. Horrified from Ravensburger brings both to the table, and after reading GeekDad’s review, I knew we had to check it out for ourselves.

I won’t go into the game play details, GeekDad Rob has that well covered, and along with Geek and Sundry’s play through will give you everything you need to know about the rules. Horrified is a cooperative game, in which you and your fellow heroes seek to defeat the monsters before they kill the requisite number of villagers, or before you run out of Monster cards. You can play by yourself or on a team of up to five heroes.

In this game you are not fighting one classic Monster but several. You have plenty of options, and the more monsters you play with the more difficult the game is. Each monster has different strengths and weaknesses which means that the game can be played many times without repeating the same strategy. Heeding the warning from GeekDad Rob we did not start with the suggested combo of Dracula-Creature, but with monsters of our own choosing. The first time we played the game, the kids all wanted in on the action, so we played with far more monsters than we probably should have for a beginning game.

There are six monsters to choose from, Wolf Man, Dracula, Creature from the Black Lagoon, The Mummy, The Invisible Man, and then because this is “classic” and a woman is nothing without her man, we have Frankenstein and the Bride. For this English major I appreciated the idea that the villagers are so beset with terrors that they colloquially refer to Frankenstein’s monster as Frankenstein, but it still chaffed a little. Defeating each monster requires different plans of attack, and each monster has a different power that is unsurprising for their type, invisibility, biting, etc. Each monster is unique in these things and the way you approach the game and your personal strategy varies greatly depending on the monster you are going after. Monster to monster it can feel like a very different game and so will make for some excellent subsequent play throughs.

The game is recommended for ages ten and up, but in our house we also have an eight year old and five year old who want to do all the things with all the people all the time. So we generally end up adjusting the game slightly for the age and attention span of our kids. We did this with Horrified but when it came to the monsters themselves, the details on their cards, we followed the rules in entirety. The kids loved playing with the monsters they had chosen, The Invisible Man, The Mummy and Wolf Man, and had no trouble following the directions on the monster cards. If you are looking for a way to make the game easier and/or shorter there are definitely modifications that can be made without sacrificing the smoothness of the game. It is worth noting however, that even with modifications for younger players we barely won the game. Those monsters know what they are doing!

Our kids are very linear, and so each of them focused on defeating the monster that they had chosen to include, rather than playing together against all of them. In doing so there were times when they picked ingredients up and were focused on getting them to each other, but not to help them in their own personal goal. They actually worked better as a team by focusing on their own monsters. It didn’t make it any easier, but it certainly sharpened their cooperative game skills and made them pay more attention to their strategy.

What we didn’t expect was for our kids to ally more closely with the monsters than with the heroes. Our five year old straight up sympathized with the Wolf Man. The notes on the card say that he is “tormented by his form” and that to defeat him you must “develop an antidote and administer it to him,” which led her to ask what “tormented” means. We told her that he hated being the Wolf Man and that she had to make medicine to help him. She played as the Scientist and took it as her duty to heal him, to save him, not to destroy him. She showed such compassion and passion in that task, she was 100% committed to his rehabilitation that when she succeeded everyone cheered. She did not defeat her monster, she saved him.

The game feels very much like life right now, very often there is no good choice to be made, just the lesser of two evils. All the monsters in play are always on their way to get the nearest villager, and so you generally end up being attacked on multiple fronts. There is no more appropriate way to look at the whirlwind that is 2020. This game however has better imagery than 2020. The pictures laid out on the board have the kind of vintage feel you would expect from a game about these particular movie monsters. It has a very nostalgic feel to it, that gives me the warm fuzzies, and I’m not usually one for the horror genre. The yellow brick road connecting all the locations is an interesting color choice. Clearly they are going for moonlight, but it comes across more as land of Oz. The game is exceptionally well constructed and the storage is excellent, though I think I prefer what one player has done in replacing all his plastic figurines with the Funko miniatures of these monsters.

You can find printable expansion monsters on BoardGameGeek for the Phantom of the Opera and The Fly, if you can include Jeff Goldblum in a game you should always include Jeff Goldblum in a game. There is also an alternative printable hero, Abbott and Costello. I would like to see a modern update to this game. Playing as Evelyn O’Connell or Buffy Summers, whilst fighting The Scorpion King or Glory would be pretty neat. But I suppose that would defeat the purpose of the game, which is to expose a new generation to the monsters of classic horror. This is a fun game to play and it is fun to look at. The game play is seamless once you have a handle on the rules, it has been very well thought out. If you are a fan of classic horror, or just a fan of a well executed game then you will definitely be a fan of Horrified. 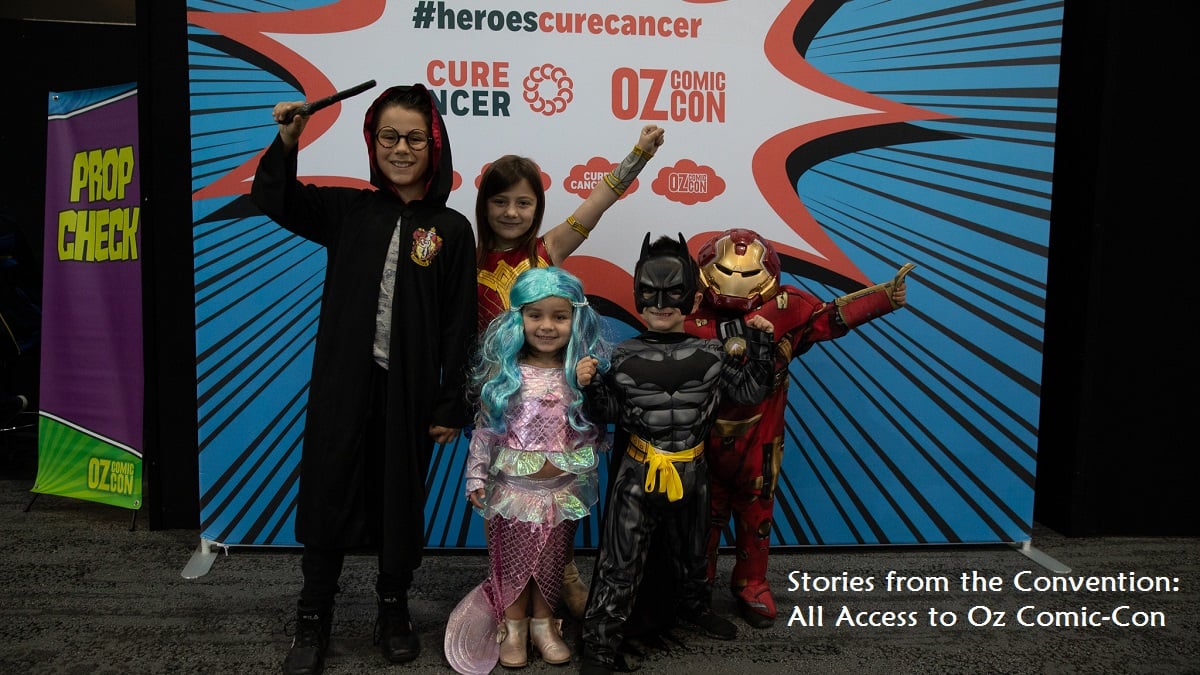 Stories from the Convention: All Access to Oz Comic-Con