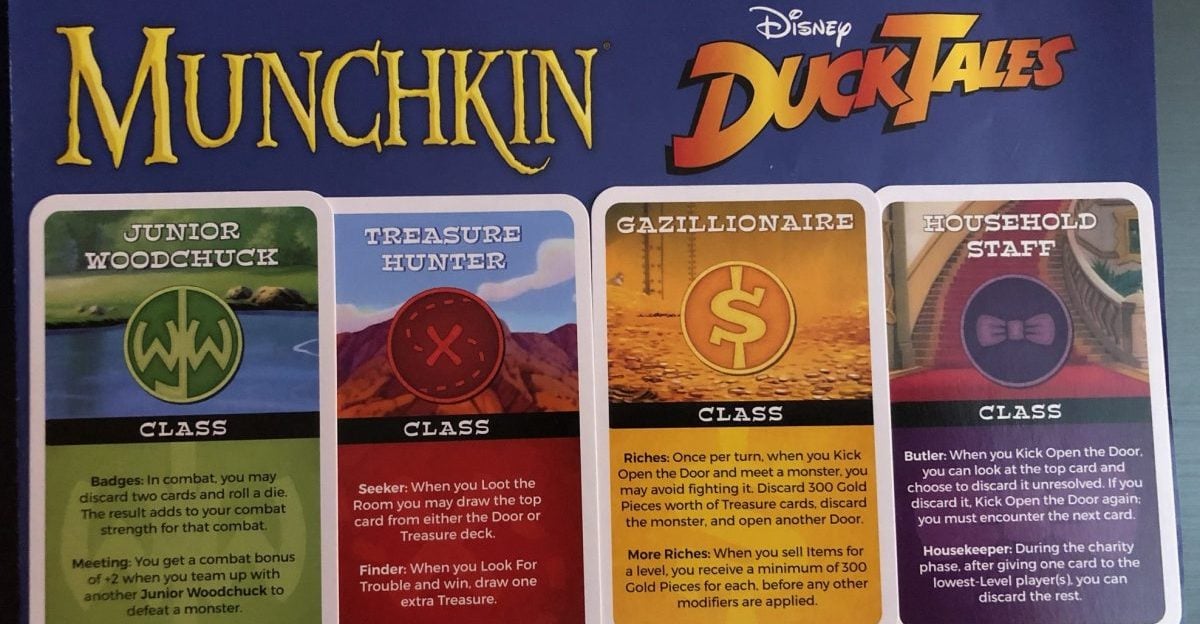 Since the early 2000s, Steve Jackson games have been entertaining us with Munchkin and its various offspring, and just when you think there’s nothing else to expand with, well here come race cars, lasers, aero-planes. I cannot tell a lie. Ever since I found out that Munchkin: Disney Duck Tales was coming out, the theme song to the original cartoon has been stuck on a loop in my head. Duck Tales was, and thanks to Disney+ is, my jam.

What Is Munchkin: Disney Duck Tales?

It is exactly what it says on the box, a new edition of Munchkin with a Duck Tales theme. We’re talking old school here, not the David Tennant variety. Though both shows are excellent, it is the ’80s nostalgia that really sets this game apart. Whilst I assume that most people seeking this game out will be in their late thirties like myself, the game is recommended for ages 10 and up, but has also been easily played by our seven-year-old. They have seen the original Duck Tales, love the new Duck Tales, and are avid fans of Munchkin in any flavor.

How Do You Play Munchkin: Disney Duck Tales?

If you can’t answer this question for yourself, then you might want to start with a more vanilla version of the game, unless, of course, the only draw for you is the Duck Tales theme. Munchkin is a card-based game in which the goal is to collect as much treasure as possible on your way to level 10 and victory. Along the way, you will enlist the help of allies and strange items. 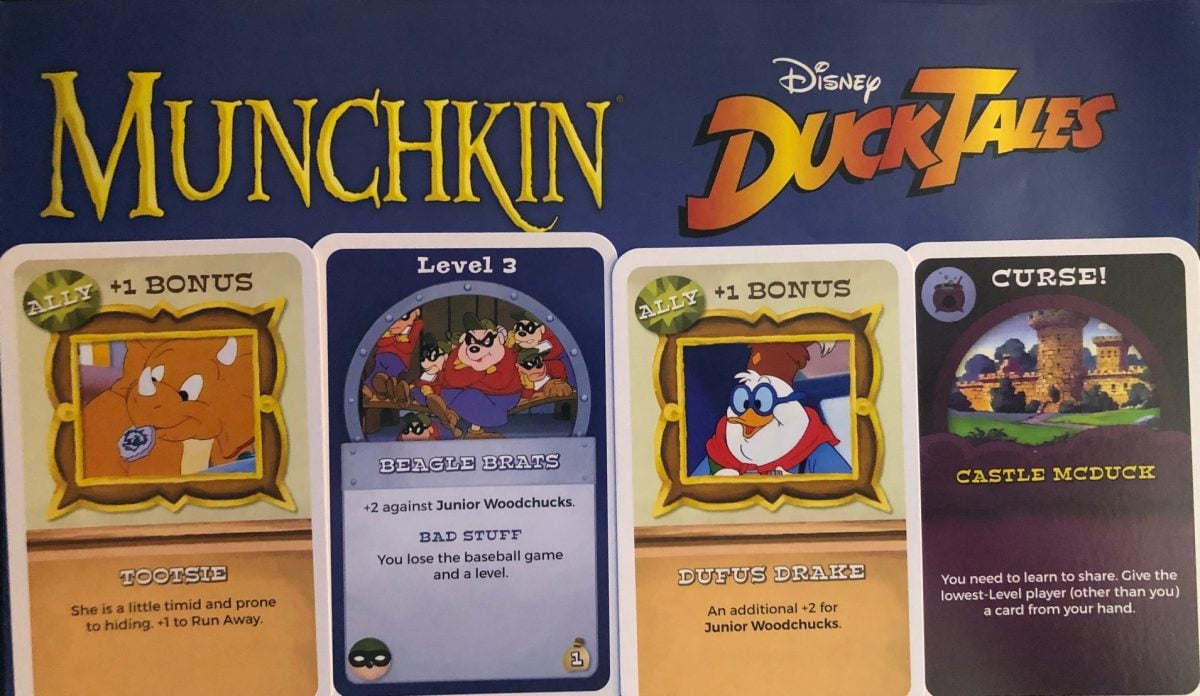 Each turn consists of several actions, “kicking down the door,” looking for trouble or looting the room, and charity, but also allows for cards to be played out of turn. When you kick down the door, by drawing a card face up from the door pile, you will either be faced with a monster to fight, a curse that will end your turn, or a special card to be kept or played instantly. If you fight a monster and win, you proceed directly to charity. If you were cursed, you were just cursed; deal with it. If you drew any other card you may look for trouble, which is to fight a monster from your own hand or loot the room by drawing a second card from the draw deck  Once you are done, if you have more than five cards in your hand, you must reduce your hand to five. You can do this by playing or selling cards. If you can do neither, the excess cards go, charitably, to the player with the lowest level. If none of this makes sense to you, I highly recommend that you watch the episode of Wil Wheaton’s TableTop that provides an excellent and entertaining introduction to Munchkin.

The rules in Munchkin: Disney Duck Tales follow the same pattern as previous versions of Munchkin, with a few key changes, and, of course, many thematic differences. One of the big differences is the introduction of character cards, which are used instead of races. 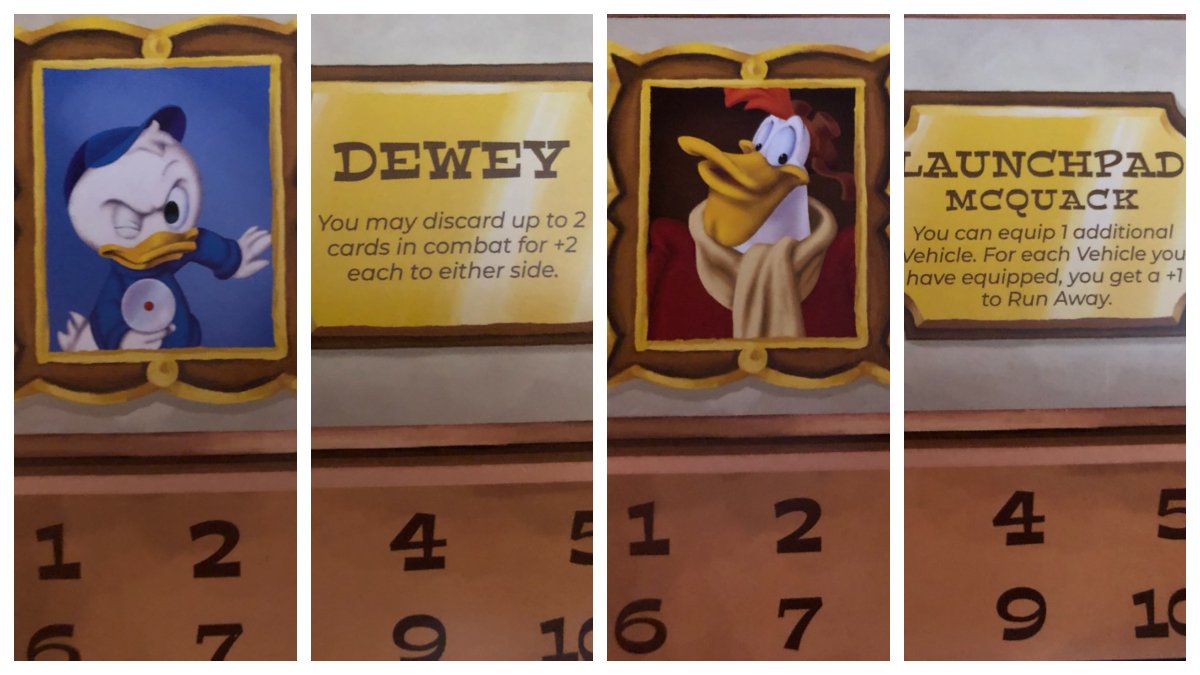 There are six character cards, one of which is assigned at random to each player before gameplay begins. You can play as Scrooge McDuck, LaunchPad McQuack, Webby Vanderquack, Huey, Dewey, or Louie. Unlike races in the conventional game of Munchkin, these cannot be changed during gameplay.  Each character has a different special ability, and each card has a place to record which level you are on. I would still rather use a ten-sided die myself but to each their own.

A big difference, and one I really enjoy, is that the wandering monster card from the original game is an added feature on any of the cards with the Beagle Boys on them. Which means that a Beagle Boy card can be played as a wandering monster. This greatly increases the number of monsters that can wander in Duckburg, so beware when playing with conniving ten-year-olds—danger lurks behind you.

Winning Munchkin: Disney Duck Tales is exactly the same as winning at regular Munchkin or one of the other variations. The first person to reach level ten wins. In our household, we often play to five, as all of our children enjoy playing this game, but it can go on for a very long time with human munchkins involved.

Should You Buy Munchkin: Disney DuckTales?

If you love Duck Tales, absolutely. If you love playing a variety of styles of Munchkin, absolutely. The mechanics of Munchkin itself are tried, tested, and thoroughly enjoyable, while the Duck Tales theme adds a degree of whimsy that can be appreciated even if you are simply a passing observer of the show. The novelty has worn off for my ten-year-old, who likes the original game more because it allows him to say sneaky bastard without getting into trouble than for any real gaming reason. But for me, a child of the ’80s, born of Saturday morning cartoons and a golden age of Disney, this is rapidly becoming my go-to edition.