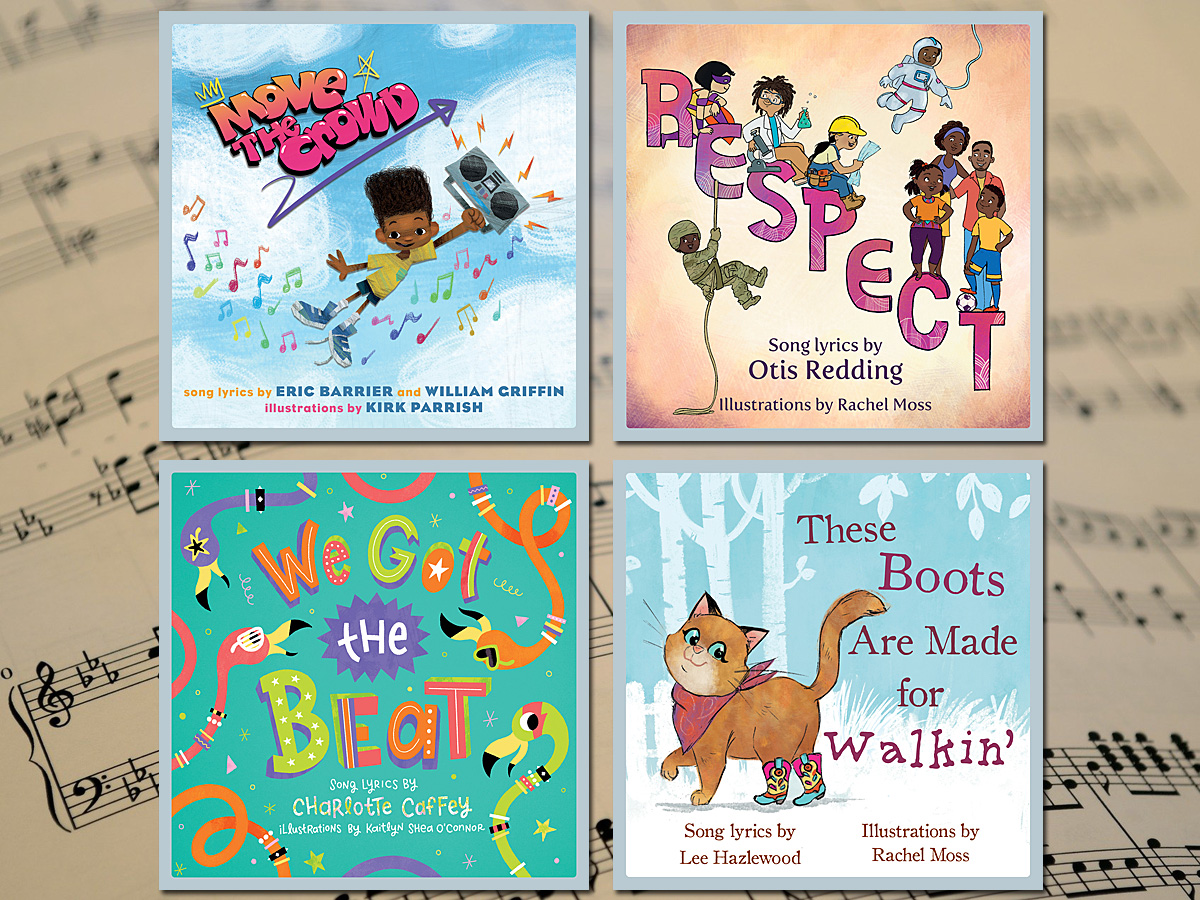 Earlier this year, I looked at four picture books from the LyricPop series. These books use the lyrics from classic songs and adapt them into picture book format, telling stories to inspire young readers and spark nostalgia in the adults reading to them. Today, the series is back with four more song-to-picture book adaptations so I took a look at the latest offerings.

Move the Crowd by Eric Barrier and William Griffin

First up in this new set of LyricPop books was Move the Crowd by Eric Barrier and William Griffin, better known as Eric B. and Rakim. This wasn’t a song I was familiar with prior to reading the book so everything about it was an unknown for me except the genre as I knew this was originally a hip-hop track.

In the picture book adaptation, a young boy finds a boombox and is entranced by the sounds he hears coming from it. Inspired to create his own rhymes, he gathers together friends and instruments, working together to make music that will inspire joy and get the crowd he draws dancing and living their life to the fullest.

I loved the artwork here. The book begins with a very minimalist style—the first pages are almost entirely white and grey with just the boy and the boombox providing any color. The musical notes coming from the speakers are colorful and as it plays more colors seem to explode from it, filling the page with color and sound. As the boy discovers his abilities and brings people together, the pages become busier and busier until, by the end, he is surrounded by his creations.

Move the Crowd adapts brilliantly to a picture book format and will inspire young readers to try their own hands at creativity, and to listen to the works of others for inspiration.

We Got the Beat by Charlotte Caffey

The second book of the batch was based on another song I didn’t know. We Got the Beat by Charlotte Caffey was originally performed by The Go-Go’s in the 1980s and is an upbeat pop song in the same style as Cyndi Lauper or Tiffany.

In this LyricPop book, there is no real story per se. Instead, we see kids and animals (namely some flamingos and a single, fabulous pony) showing off their style and dancing confidently across the brightly colored pages. Colorful really is the keyword here because every page pops with neon bright tones and ’80s style squiggles.

I wasn’t totally sold on this as a picture book adaptation. The lyrics are very repetitive and while that works great in a pop song, it’s not so great in a storybook. Rather than being a book to read aloud, instead, I would suggest looking through it with your kids and allowing the vibrant illustrations to inspire them and boost their confidence before seeing what dance moves you can come up with together.

The third LyricPop book released this October is based on Respect by Otis Redding, the first of the bunch I actually knew and based on the classic soul record recorded by Aretha Franklin.

In this adaptation, a young girl imagines various futures she could pursue, all powered by the concept of respecting yourself and others. Through the top half of the book, she imagines herself in a wide range of professions from dancer to doctor, construction worker to conservationist, astronaut to athlete to artist. At the bottom of the pages, we see the girl playing at these ideas with her friends and family by building blocks, playing with science kits, dancing, painting, and otherwise using her imagination. Respect was created with help from the Otis Redding Foundation and so at the end of the book there are ten questions to talk through with your kids about the meaning of respect, these were one of my favorite things in the series so far because they prompted great discussions.

Again, I struggled with the adaptation a little here. While the concept behind it is great, the way the series scrupulously sticks to the original lyrics with no leeway can make things a little weird. For example, the astronaut page shows two astronauts on a spacewalk at the top and the girl and her brother sitting in a homemade cardboard rocket at the bottom, but it is paired with the line “yeah baby, whip it to me” which doesn’t make sense at all in the context. Similarly, the very last page of the book shows the family happy and smiling, playing music together, but the lyric is the far more downbeat “Or you might walk in and find that I’m gone.”

This was one of my favorites in terms of the ideas it worked to portray, but I found myself trying to ignore the lyrics at times in order to focus on that which is somewhat contrary to the concept behind the book series.

These Boots are Made for Walkin’ by Lee Hazelwood

Last in this second set of LyricPop books was These Boots are Made for Walkin’ by Lee Hazelwood, originally performed by Nancy Sinatra.

In this adaptation, a man has a close relationship with his cowboy boot-wearing cat until he adopts a new puppy. The cat and the puppy fight over having to share the man’s time and affection with one another until he meets a girl, at that point, the two become friends as they support one another instead.

This is a sweet story, but very different indeed from the original meaning of the song lyrics which once again means that the book can become rather confused. I suspect a lot of explanations will be needed when reading this one with young readers and some of those explanations could be tricky to think up, such as trying to figure out what the line “I just found me a brand-new box of matches, YEAH” has to do with a cat helping his puppy friend to get a bowl of milk.

As with most of the others in this second-batch of LyricPop stories, sticking exactly to the original lyrics has a slightly detrimental effect when using them as inspiration for a kid-friendly story and that’s a real shame because the underlying concept is great.