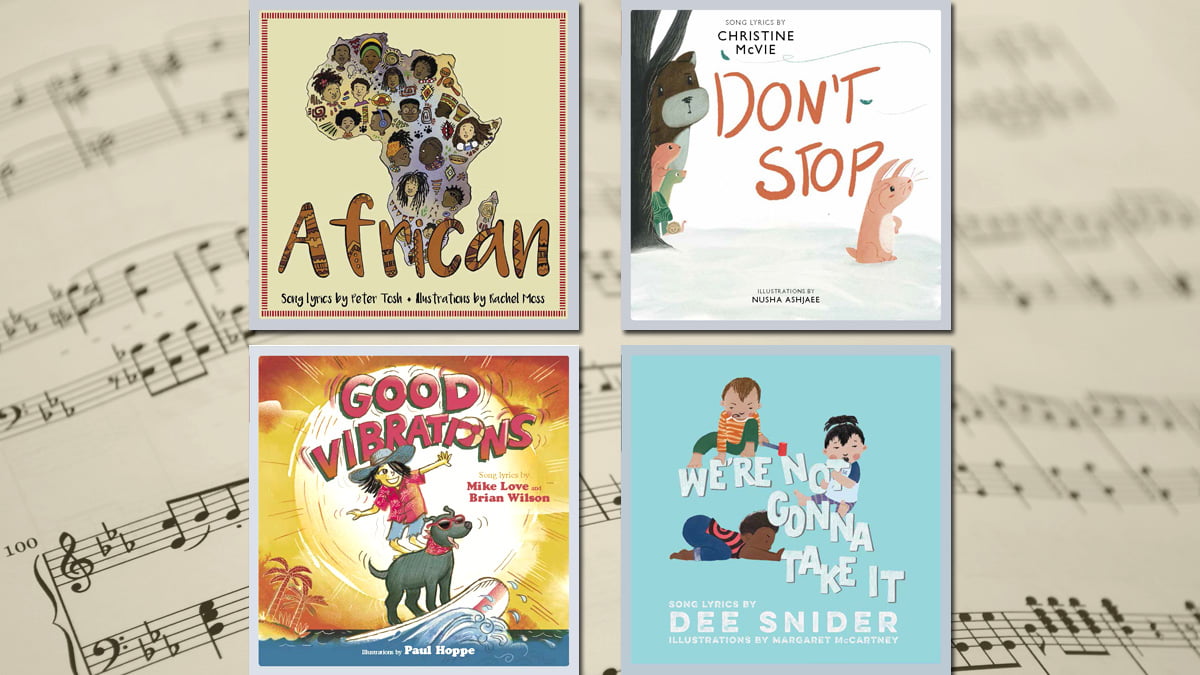 LyricPop is a series of picture books with stories based on well-known pop songs. The first wave of four titles is out today with a second and third wave planned over the next year.

This first wave of books included two songs I know very well and two I was unfamiliar with which gave me some great insight as to how much familiarity with the songs impacted my feelings for the book.

The first book of the series (working alphabetically at least) is African, adapted from the song by Peter Tosh. This was a song I had never heard before I read the book so I had no idea what to expect. Those familiar with the song will know that it is a call “to all black people that they are part of the same community” and this theme is reflected strongly through the artwork. The book shows black people taking part in communities all over the world from London to Miami, Moscow to Trinidad, and showing off what makes them unique.

I loved the diversity on display here from Jamaican illustrator Rachel Moss. She uses a huge variety of skin tone shades rather than sticking with a single, generic brown and the people are shown wearing dozens of different styles of clothing from a cropped t-shirt and shorts to traditional tribal dress, business suits, and religious attire. Mixed in among these scenes are images of traditional African items like tribal masks, beautiful maps, and images of African wildlife. The colors leap off the page everywhere you look.

I have to say that I’m not entirely convinced that the reggae style of lyrics works in a written format; without that laid-back beat behind them the words felt somewhat flat. As an experiment, I tried re-reading the book while listening to the song and that really brought the whole thing to life—although this meant that you didn’t get as much time to linger on the wonderful illustrations. With this title, I’d suggest “reading” it with the song playing the first time, then going back and reading it again at your own pace while absorbing the wonderful images and talking about what the words mean.

Next up was a book based on a song I know very well indeed, “Don’t Stop” by Fleetwood Mac has been a favorite of mine for many years. The style of the Don’t Stop book was wildly different from the previous one and the illustrations follow an adorable pink rabbit who has awoken on a snowy day in spring feeling sad and a little depressed. As the day goes by, the rabbit’s friends come out of their winter hibernation and help them to see the bright side of the day. Together they find the first flowers of the new season and have fun in the snow.

The illustrations by Nusha Ashjaee are ridiculously adorable and perfectly capture the message of the song, putting bad memories behind you and looking ahead to a brighter future. Again, I’m not sure that song lyrics copied down word for word work as intended when in a written format. The repeated line “ooh, don’t you look back” works beautifully when sung, but when being read on a page it seems repetitive. I wish a small amount of creative license could have been taken in these “translations” such as only using a repeated line once or twice, rather than four times in a row.

Good Vibrations, based on the Beach Boys song, is the third book in the LyricPop series and another based on a song I know well and love dearly. This book, however, ended up being my least favorite of the bunch.

The story the book tries to tell us is about a girl and her dog making their way to the beach with a surfboard in tow and leaving good-natured chaos behind them. It’s a cute, fun story with bright, summery illustrations by Paul Hoppe, but because that story has nothing to do with the lyrics at all, it just feels simply odd.

Metaphor-filled lines like “When I look in her eyes, she goes with me to a blossom world” accompanied by a girl grinning with her surfboard in hand beside a sunglasses-wearing dog just don’t make sense. Add to that how many of the lyrics are lines of nonsense that only work when sung (“oom bop bop” or “do do do do do, do do do, bop bop-bop-bop-bop bop” for example) and the book just ends up feeling like a confusing mess.

Given how many amazing songs are out there with lyrics far more suited to story-telling, I’m really confused about why this one was chosen.

We’re Not Gonna Take It by Dee Snider

The fourth and final book is this first wave of LyricPop titles is We’re Not Gonna Take It by Dee Snider of Twisted Sister. This anti-establishment anthem isn’t one I know well, and here the lyrics have been illustrated with a twist, rather than railing against the establishment, the kids here are fighting against their parents. The three toddlers in the book are not gonna take being fed healthy food when there are cookies nearby, nor are they happy about bathtime, or being forced to play in a playpen when there is a vast world out there to explore. No matter how much their parents try to control them, these kids are determined to fight against the authority figures in their lives!

This is easily the most fun of all four books and kids will love the funny antics of the three toddlers and a puppy as they exasperate their parents at every opportunity. The illustrations by Margaret McCartney are bright, bold, and fun to look at with some fun touches and plenty of diversity too. There are a few lyrics that don’t quite make sense in the context seen here (“A pledge pin! On your uniform!” being the most obvious) but on the whole, the lyrics make sense with the pictures and work well in written form. There are some very clever illustrations to go with them too, one of my favorites being “now drop and give me twenty!” taken to refer to the kids being put down for a nap!

I listened to the original Twisted Sister song while reading along with the book and that made the whole thing even better, so much so that I’d love to see an official bonus feature made with the song playing as the pages turn, like the old DVDs you sometimes got in picture books.

This was probably my favorite of the four LyricPop books so far!

Two more waves of LyricPop books are scheduled for release. The second wave books are due out in October 2020 and consist of:

And the two planned for release in March 2021 are:

There was a real mixed bag here in terms of how much I enjoyed these books, and this mostly came down to how well the lyrics translated into a written, story-style format. Some of the songs, like Don’t Stop, worked really well, while Good Vibrations—despite being an awesome song—failed completely in my opinion. This shows that whether or not you like the song itself has very little impact on how good the LyricPop adaptation will be.

I would definitely recommend you check out the LyricPop series and I’m already excited to read the next wave of titles in a few months, especially These Boots Are Made for Walkin’ which will feature an indignant cat unhappy that his owner has brought home a new puppy!

Disclosure: GeekMom received a sample of these books for review purposes.