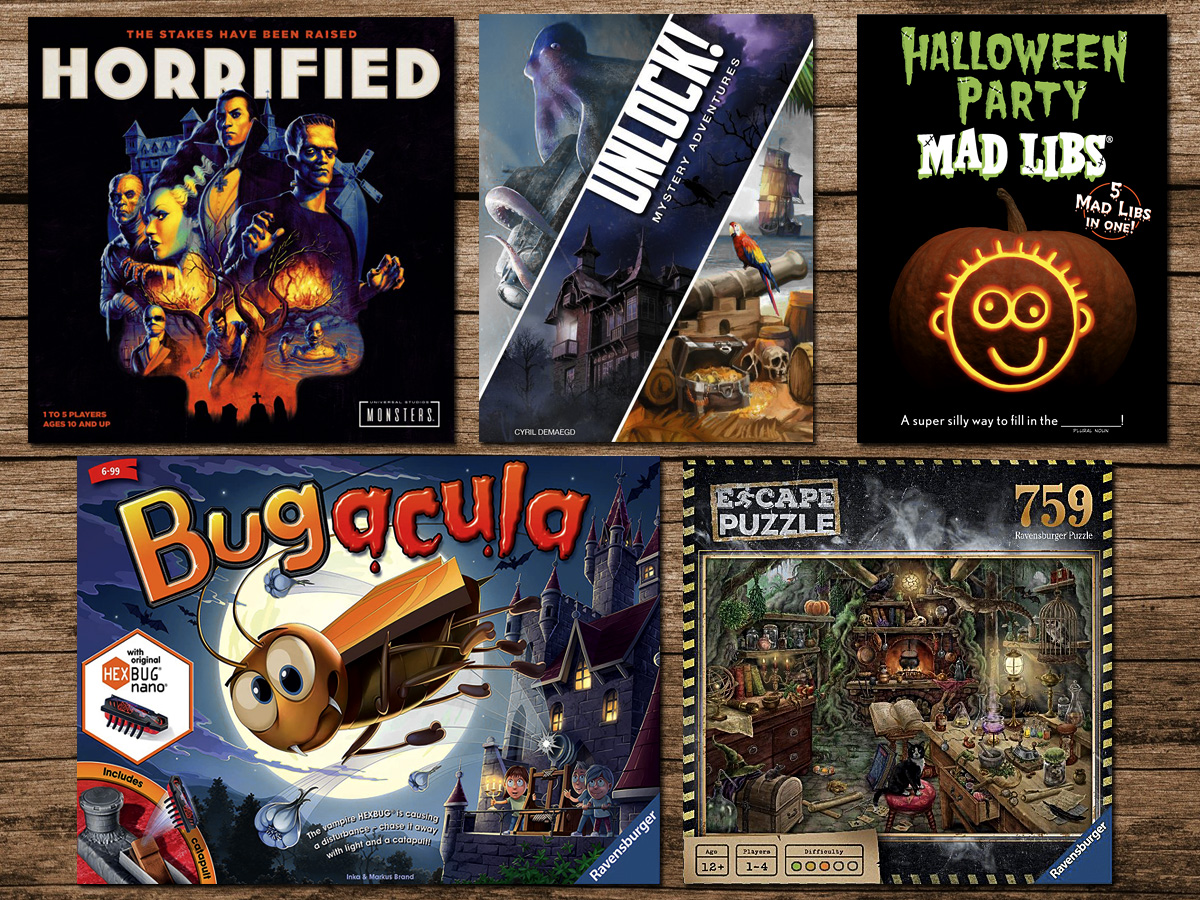 Bugacula is a family-friendly board game in the same family as Bugs in the Kitchen that I reviewed back in June. The game uses a battery-powered Hexbug Nano that plays the role of Bugacula. Players must race through the rooms of the castle collecting or lighting candles while trying to avoid being caught by Bugacula.

After setting up your game, players roll the die to move around the board. At the same time, the Bugacula Hexbug will be scuttling around. Should it touch you, your playing piece will be sent back to the starting room. Several rule variants are included in the rule book, some with players working together to light all the candles before running out of garlic and others where players compete to collect their candles first.

To be honest, we quickly found that Bugacula was ideal for creating your own games so we soon had versions with multiple Hexbugs and all sorts of other things going on, making this an ideal game to allow kids to use their imaginations and invent new ideas.

As with Bugs in the Kitchen, Bugacula is a silly, noisy, fast-paced game that the whole family can play together and kids will love. The highlight is the catapult, which you can use to try and launch Bugacula to the moon should it crawl down the passageway—it’s more difficult than you might think, so you’ll want to make sure there are no drinks, breakable objects, or animals nearby!

There’s a good mix of strategy and luck here too. Bugacula is generally unpredictable (assuming the board is set up correctly and on a level surface), but players can try and think of ways to avoid getting too close and being caught out.

The game is well built but does have a lot of molded plastic components.

Horrified is a cooperative family board game where the players work together to defeat classic Universal monsters like Dracula, Frankenstein, and The Creature From the Black Lagoon. You can read a full game review from GeekMom Sarah for a more in-depth look.

Horrified gameplay is determined by the monsters you choose to face, each of which requires the players to complete different tasks in order to defeat them. Dracula needs you to smash four of his coffins that are located around the board by collecting red tokens worth six or more, while The Creature From the Black Lagoon needs you to bring tokens of different colors to the Camp location. The players can play as different characters, each with their own special abilities, to add even more variety to the game.

In each version, the players win by satisfying the win conditions of each monster in play to defeat them, while the monsters win by attacking the players to push the terror marker to maximum, running out of cards in the monster deck, et cetera.

Horrified is a fantastic and fun game that is ideal for the spooky season. Players don’t need any knowledge of the classic Universal monsters in order to play but might be encouraged to check out some of these classics after playing. The cooperative nature of the game also means that younger monster-fans will be able to join in with older players offering guidance.

There’s a lot of strategy here and players will need to work together in order to take down the monsters and win the game, even occasionally sacrificing themselves for the good of the wider team, which can be difficult for some young players. The relatively heavy strategy requirement plus the cooperative gameplay make this an ideal choice for those looking to move up to more complex games.

Horrified is exceptionally well-made with beautiful components that are mostly made from thick, high-quality cardboard and minimal uses of plastic.

Recommended Age: 10+, kids will need to know grammatical terms like nouns and adjectives in order to play
Number of Players: 1 and Up
Estimated Play Time: 10-15 Minutes, will depend entirely on the number of players

What Is Halloween Party Mad Libs?

Mad Libs is about as simple a game as it comes, and the same can be said for this Halloween Party bulk pack. One player is the Reader who selects one of the stories from the game. They then ask each of the Writers (other players) in turn to give them the type of word (nouns, verbs, adjectives, places, types of food, etc) needed to fill each space.

Once all the blanks have been filled, the Reader then reads out the completed story to the group. It will probably be nonsense, but that’s half the fun! We also played a different way by giving each player their own story to fill in, then going around the group and listening to the crazy tales everyone had concocted.

There are no winners in Mad Libs, it’s simply an opportunity to have fun.

My eleven-year-old had no idea what Mad Libs was when we received our copy, so instead of introducing him to the overall concept first, I simply had him fill out a set of words, then read his completed story out loud. By the end, he could barely breathe he was laughing so hard!

We fully intend to play many rounds of this game this Halloween. The nature of Mad Libs makes it ideal for Halloween get-togethers, including those over Zoom as the game can easily be played long-distance,. Also, because many of the subjects in this set of five Mad Libs games are not specifically Halloween themed, I imagine we’ll be breaking it out at Christmas too.

What Is Unlock! Mystery Adventures?

Unlock! Mystery Adventures is a set of three escape room scenarios in a box that are played using a deck of cards and a free app. The box contains three scenarios plus a tutorial with each scenario at a different difficulty level from easy to hard. The three scenarios in this box are:

Unlock! is an escape room in a box that is controlled via an app. It was the first escape room at home that our family tried, and I’m really glad it was because the system was very easy to understand.

The game uses puzzles on cards that, if solved correctly, unlock new cards, eventually letting you find a code to input into the app and win. We played our first scenario during a games night along with another couple (prior to lockdown) and our ten-year-old. After working through the tutorial to get an idea of how it all worked, we dived straight into the level one scenario, a haunted house. Thanks to several early mistakes that resulted in time penalties, we finally entered the winning code with just under 30 seconds left on the clock, a true Mission Impossible-style ending if ever there was one!

We played the second scenario with only myself, my husband, and our son (who gave up halfway through). The increase in difficulty was very noticeable and we ended up running out of time. When this happens, the count down simply moves to count up, so you can make a note of your overall time and try to beat it. We’re yet to even attempt the third scenario, given that lockdown has meant we’ve been unable to play with anyone else and we know it will be beyond just the two of us.

I really enjoyed playing Unlock! Mystery Adventures and would be very interested in playing more from the series in the future. Seven different Unlock! games are available, each containing three scenarios including some themed on well-known characters and stories like Sherlock Holmes, Alice in Wonderland, and The Wizard of Oz.

Working to solve the puzzles quickly really brought everyone together, and it was fascinating how people broke off into smaller teams to look at something specific, sharing ideas and suggestions. Despite there being no actual danger or consequences, it was amazing how everyone really got into the theme and felt pressured to complete the puzzles and “escape” before the clock ran out!

I’ll definitely be picking up some more Unlock! games in the future, and I’m looking forward to someday taking on a hard level scenario too!

What Is Escape Puzzle: The Witch’s Kitchen?

The Witch’s Kitchen is one of the designs in the Escape Puzzles series from Ravensburger that combine a traditional jigsaw with an escape room in a box. For a more in-depth look, check out GeekMom Jenny’s full review.

We received a copy of the Witch’s Kitchen design; the story behind this puzzle is that you have been poisoned and need to search the kitchen for an antidote. I started work on the puzzle itself on a Sunday afternoon and, working on it for a few hours a day, finally completed it—good thing this poison works slowly! This is a surprisingly tricky puzzle, especially as it doesn’t precisely match the design on the front of the box, although that image will give you a very good guide to go off.

You’ll notice as you work on your puzzle that many of the edge pieces have numbers written on them. These are potential answers to the riddles that are hidden throughout the puzzle design. Once you have completed your puzzle and solved the riddles, collect the edge pieces with the matching numbers to create another, tiny puzzle. The hole in this should leave space for a single piece from the middle of the puzzle—this is your solution.

We successfully solved all the riddles but found that the center of our solution didn’t appear to fit. Given that it was the only puzzle piece that made any sense, we opened the solution envelope to check and found that we were correct. This was slightly disappointing, but after consulting with GeekMom Jenny, it appears we simply had a defective puzzle—however, I have noticed that at least one reviewer on Amazon had the same problem.

The Witch’s Kitchen was a really unusual take on a traditional jigsaw and I enjoyed working on it. At 759 pieces, this is a tricky puzzle anyway and the differences between the box art (which is actually quite small) and the finished design really add to that difficulty. One thing I will also point out is that the answer numbers on the edge pieces and some of the numbers and objects that make up the riddles themselves are incredibly small, so anyone with vision problems may struggle significantly to work on this.

Although I worked on the jigsaw mostly by myself, our family came together to solve the riddles, and we had a great time trying to figure out patterns or unravel codes in order to work out which edge pieces we needed to reveal the final solution.

I would definitely be interested in working on more puzzles from this series, but I’d love to see some future releases with fewer pieces so they can be worked through more quickly.

GeekMom received copies of these items for review purposes. 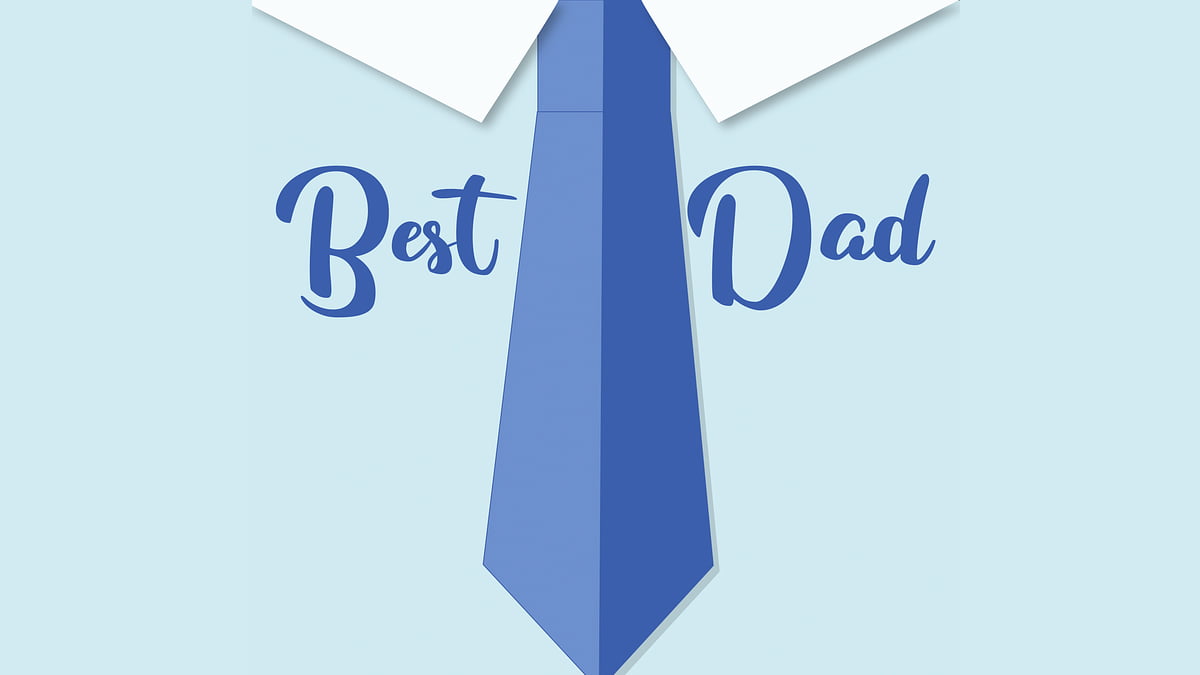 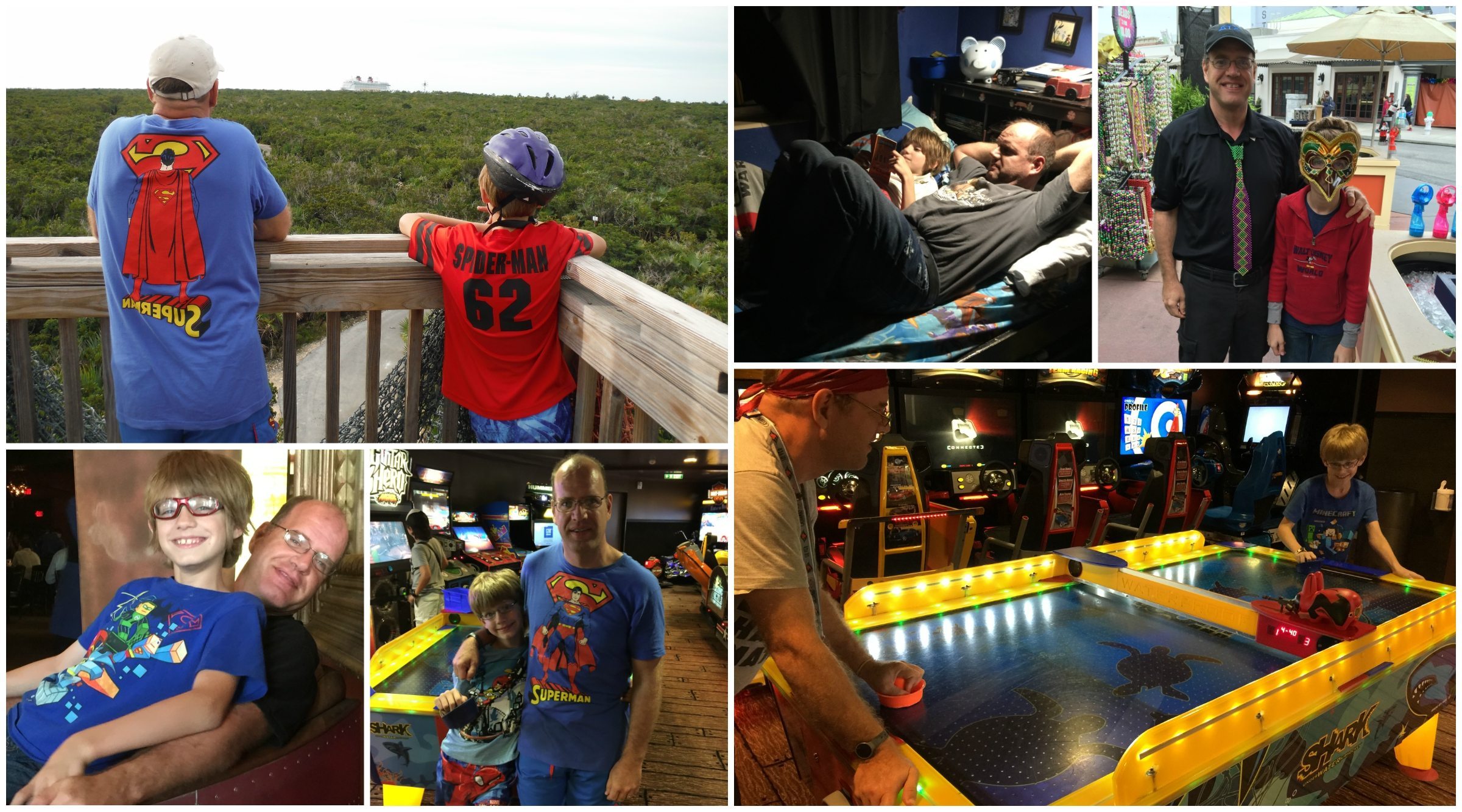