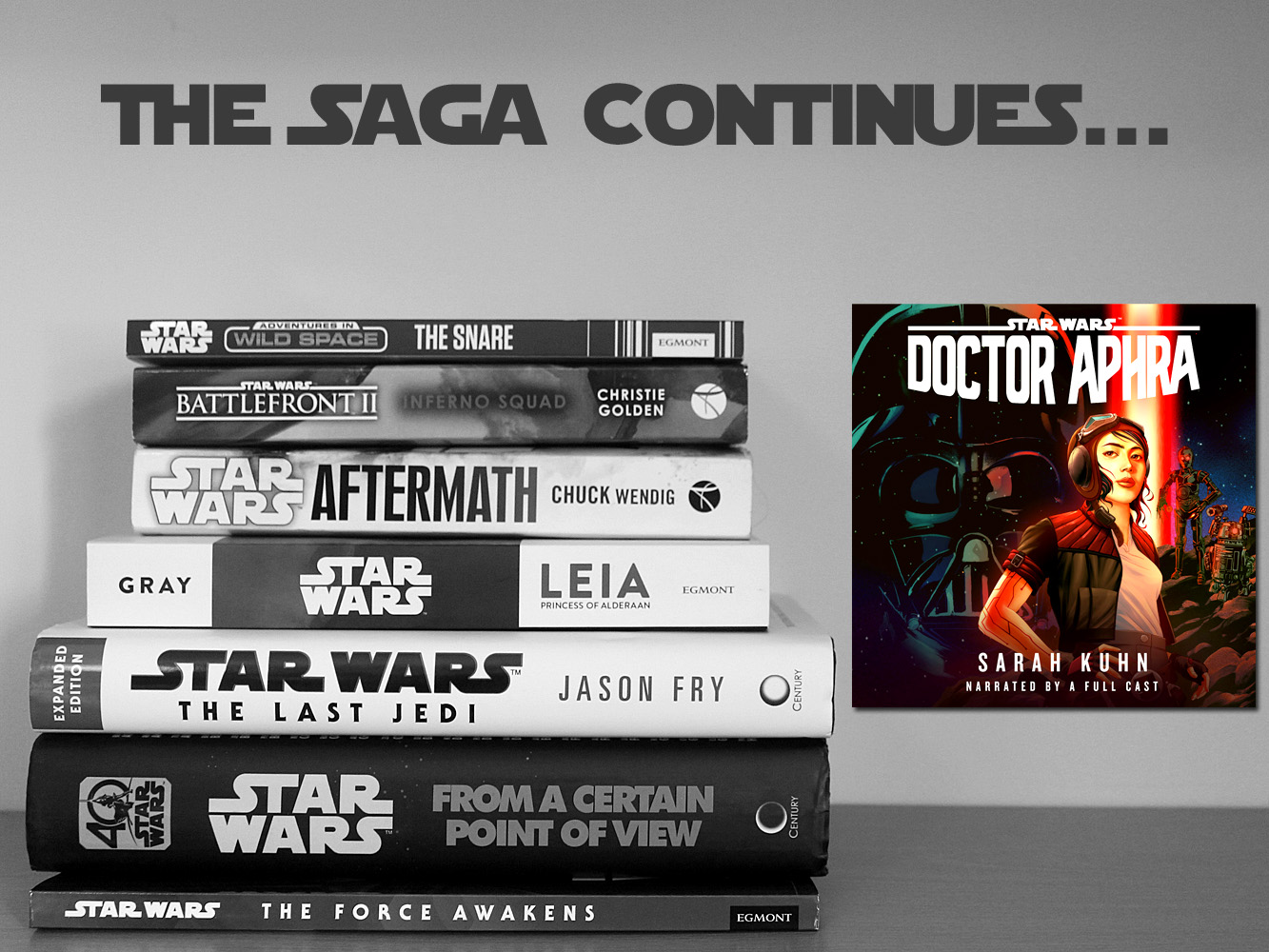 Doctor Aphra is a character who was first introduced in the Darth Vader comics in 2015. A rogue archaeologist and classic anti-hero, she has gone on to gain increasing popularity, first with her very own ongoing comic title, and now with the second Star Wars original audio drama dedicated to her story. This audio drama was my first introduction to Aphra, and I already know I’ll be seeking out many more of her stories in the future.

The Doctor Aphra audio drama follows Doctor Chelli Lona Aphra over several weeks/months between the events of A New Hope and The Empire Strikes Back. When a job extracting rare and excessively dangerous droid parts from a high-security quarantine facility goes wrong, Aphra is unexpectedly rescued by Darth Vader himself who hires her for a job he needs completing off the Empire’s radar. Vader is tormented by the destruction of the Death Star and has resolved himself to figuring out the identity of the boy who caused it, without alerting the Emperor.

Trying to both avoid Vader’s ire and also gather enough information for herself that she can make herself invaluable (and hopefully safe), Aphra travels across the galaxy with her crew of misfit droids, digging up information that a previous generation had tried to bury. She visits Geonosis, Tatooine, Naboo, and many other planets both familiar and new in her missions, and frequently finds herself facing seemingly impossible situations that she escapes from using only her brains and her wits. As she goes, Aphra begins piecing together information about Vader’s history, information that Vader will happily kill to keep secret.

This is a story that was at times laugh-out-loud funny, yet was also surprisingly poignant and even occasionally disturbing. It also answers several questions that always floated around regarding the time between the first two Star Wars movies. The story is told from Aphra’s perspective as she records what is in effect a memoir for a person whose identity is revealed quite late on, and there are many deeply personal asides buried among the caustic, cocky storytelling that help shift the overall tone and make Aphra more likable than she would otherwise have been. Triple Zero was an instant new favorite droid character, despite his deeply sadistic nature, and there were some cameos from familiar characters scattered throughout.

My favorite part of the story by far came around halfway through when Aphra visits Naboo. As soon as it was revealed that Aphra was there to visit a mortician, I felt my stomach sink, and the sequence that followed was one of the most heartbreaking and later disturbing I have ever come across in a Star Wars book, certainly cementing the “anti” part of Aphra’s anti-hero status. Another part I loved was when I learned that Aphra is an LGBTQ character and I was delighted to see an LGBTQ sub-plot rear its head, adding some much needed emotional depth to the main character.

Conversely, I found Vader’s characterization a little odd at times, enough so that it occasionally pulled me out of the story entirely. I was eventually able to explain this away by putting his odd behavior down to the emotional turmoil he must be experiencing given his discoveries during this period, but it was still more than a little off-putting. The whole tone of this audio drama is very different from the average Star Wars story and is likely to be either loved or hated by listeners.

Overall, this was an exciting romp of a story that adds a totally new style of storytelling to the Star Wars canon – at least for those of us who haven’t kept up with the comics. Aphra’s acerbic wit and daring adventures are reminiscent of characters like Indiana Jones and Carmen Sandiego and I was instantly taken by her sarcastic, witty, and self-centered personality. Doctor Aphra definitely won’t be for everyone and the audio drama style is wildly different from what has come before, but the Star Wars galaxy is large with ample space for many different forms of storytelling, so why not give this one a shot if you’re looking for something new?

GeekMom received a copy of this audiobook for review purposes.

Banned Books Week: Growing Up With Tess Of The D’urbervilles

8 thoughts on “The Saga Continues: ‘Doctor Aphra’ by Sarah Kuhn”