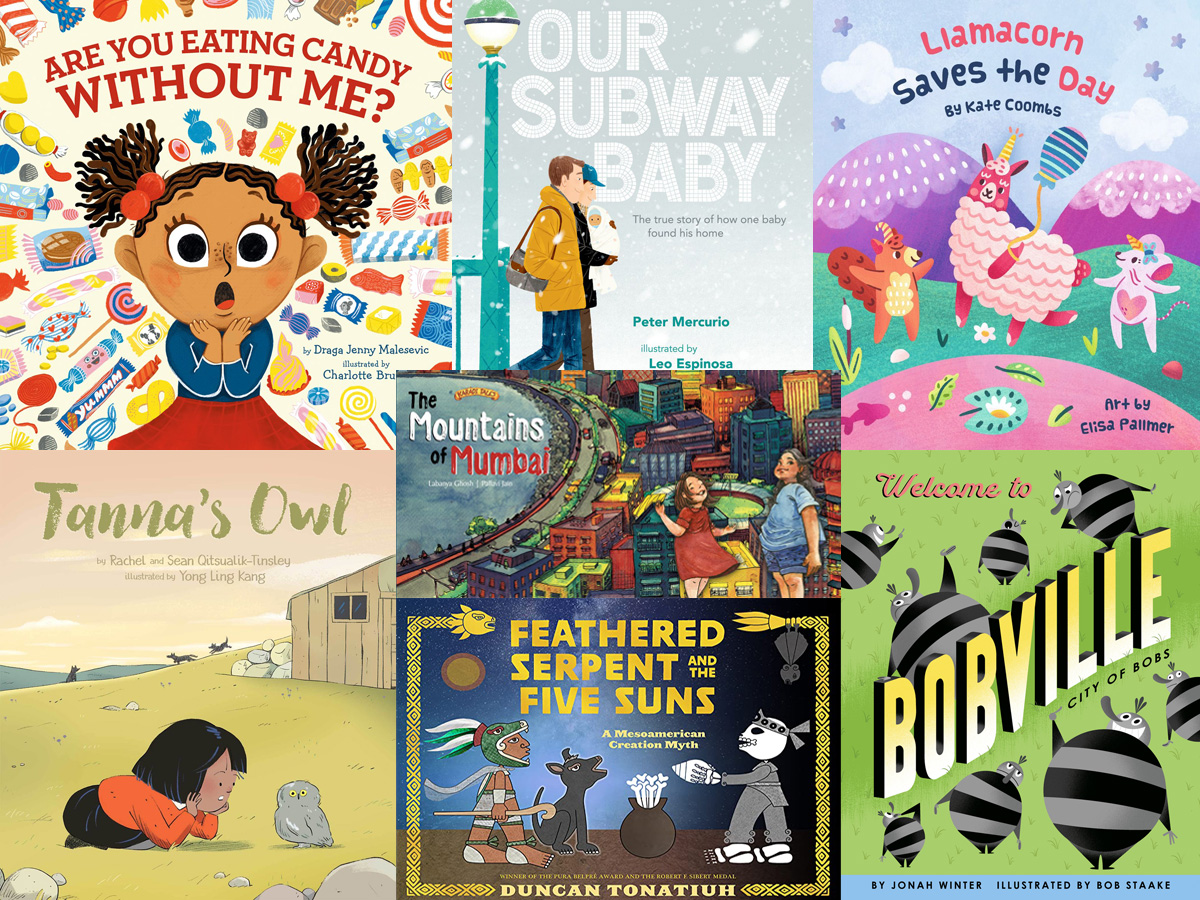 Picture books are often something that we pass down through the generations, with parents reading the same stories to their children that their own parents read to them decades before. The titles of these books become intimately familiar – who doesn’t know The Very Hungry Caterpillar, Goodnight Moon, or The Cat in the Hat? However, that shouldn’t stop you from branching out and reading new picture books as well. Here are 7 picture books released this year that are well worth reading aloud at bedtime. Who knows, perhaps these will one day be considered classics too?

Are You Eating Candy Without Me? By Draga Jenny Malesevic, Illustrated by Charlotte Bruijn

Our protagonists in Are You Eating Candy Without Me? are a bunch of pre-school age kids who represent all children the world over. The kids talk directly to us, their parents and guardians, asking important questions about whether the rules we apply to them also apply when they’re not around. Do we order our colleagues and friends to eat their veggies, not pick their noses, and not play ball inside? Or, as they secretly fear, do the rules simply not apply to us? Are we all secretly going to amazing parties filled with cake and ice cream, jumping on trampolines, and climbing trees whenever they turn their backs? Most importantly of all, are we eating candy without them?!

This book is filled with hilarious illustrations as the kids imagine what their parents and grandparents might be doing when the kids aren’t around. A Grandma bounces on a trampoline with her laundry, a museum curator tells off two colleagues after they smash a vase playing ball, and all of them indulge in a veritable feast of candy, ice cream, and lollipops. The whole book is like paging through a child’s wildest imagination and reminded me strongly of my brother-in-law Simon Coster’s picture books.

I guarantee this book will bring a huge smile to your face, just make sure you have your answer prepared for when your child inevitably asks if YOU eat candy when they’re not around. Of course, you don’t, right?

Feathered Serpent and the Five Suns explores a creation myth from the Mesoamerican region. In ancient times, the gods tried to create humans. They attempted this feat multiple times during four tonatiuhs (suns) but each time, something went wrong, and instead, they forged mountains, fish, monkeys, and other creatures. Eventually, the gods grew bored and gave up, giving the sacred bones they were using to Mictlantecuhtli – the lord of the underworld – to keep in his kingdom.

However, Quetzalcóatl the Feathered Serpent and god of knowledge did not want to give up. Instead, he traveled through nine regions facing great rivers, freezing temperatures, jagged rocks, and hungry jaguars with the help of a canine spirit guide named Xólotl by his side in order to retrieve the bones. When he finally reached the underworld and faced Mictlantecuhtli, he found more challenges awaiting him but it is these challenges that showed him how to create humans and begin the fifth tonatiuh.

This fascinating book introduces a creation myth very different from the Biblical and Ancient Greek ones we have usually grown up with. The illustrations are drawn in a traditional Mesoamerican style and the cover is inlaid with gold which will no doubt make it stand out impressively among your other picture books. As with most myths, there is no definitive version of this story, and so Feathered Serpent and the Five Suns simply tells one variation on the story.

This is a great introduction to other cultures and the way different stories have been handed down to explain questions and concepts universal to all humans such as where we came from and how the Earth and its creatures came to be.

Our Subway Baby by Peter Mercurio, Illustrated by Leo Espinosa

Twenty years ago, Danny Stewart discovered an abandoned newborn baby on a subway platform at 14th Street in Manhattan. That chance moment ended up changing his life, and that of his partner Peter, as the pair would go on to become the boy’s adoptive parents. Now, twenty years later, Peter has turned their incredible story into one of the sweetest picture books I’ve come across – Our Subway Baby – with a powerful message at its heart: Where there is love, anything is possible.

In this beautifully illustrated book, Peter tells his story in the first person, explaining the key role Judge Cooper played in forging this unlikely family, and how their family pulled together when they were offered the opportunity to take their new son home for Christmas – just three days after the court hearing where they officially applied to become his parents.

This uplifting story is filled with diversity and an overwhelmingly positive message about the nature of family and will be a great read for all, but especially non-traditional families with a child growing concerned that their family unit doesn’t look like the traditional nuclear stereotype.

Welcome to Bobville: City of Bobs by Jonah Winter, Illustrated by Bob Staake

Welcome to Bobville is about a city named Bobville. In Bobville, everyone is named Bob. The Bobs all like to eat the same foods, watch the same TV shows, listen to the same music, and participate in the same hobbies. They get up at the same time and go to bed at the same time. They are happy in Bobville, and one thing they all agree on is that they do not like anyone who is not named Bob.

One day, a Bob wakes up and decides to change his name to Bruce. He orders different-looking clothes and changes his look entirely. The other Bobs are outraged and kick Bruce out of town. They even build a wall to keep all the non-Bobs out. Bruce, however, is not concerned, because he has seen what life is like outside Bobville…

This Dr. Seuss-style story is a whole lot of fun and is filled with plenty of knowing winks to the parents who will be reading it. While the story is very simple, it does a great job of explaining many current issues that children may have heard about on the news in an easy-to-understand way. The book strongly promotes diversity and inclusion while offering multiple opportunities for parents to pause and discuss what is happening.

While not the most subtle of picture books, Welcome to Bobville clearly conveys its message. I just wish the story had continued a little longer with more pages about Bruce discovering the world beyond Bobville’s borders.

Llamacorn Saves the Day is the second title in the Llamacorn picture book series. Told in verse, this colorful book features Llamacorn saving his friends Mousicorn and Squirrelcorn after Goaticorn chews through the candy stick dam built by the Beavercorn brothers, causing the Lemonade River to wash them away downstream.

Many creatures try to help. Dogicorn picks balloons from a balloon to try and rescue them from above, but he floats by too high, and Girafficorn sticks her neck out (literally) but the river swirls too fast for her. It’s down to Llamacorn to come up with a plan that will work, but he’ll need the help of many more friends to pull it off.

This sweet, candy-colored story shows the importance of working together and also the value of trying to help, even when you fail. Every page is bursting with color, making it exactly the sort of bright, hopeful, and positive story we could all use right now. Along with the previous Llamacorn picture book – The Llamacorn Is Kind – I can imagine this being the kind of story that children will ask to have read to them night after night.

The Mountains of Mumbai by Labanya Ghosh, Illustrated by Pallavi Jain

In The Mountains of Mumbai, Doma has come from Ladakh to visit her friend Veda who lives in Mumbai. As the girls explore the city together, Doma tells Veda that while she likes the city, she really misses the mountains of her home. Veda explains that there are, in fact, mountains to be found in Mumbai, but in order to see them, Doma will need to open both her eyes and her imagination a little wider.

The pair travel to the very top of one of Mumbai’s many skyscrapers to look out at the view and Doma discovers that her definition of a mountain may fit more things than just the big brown triangles she knows at home.

This stunning picture book has some of the most beautiful illustrations I have seen this year. It made me immediately want to go and explore the vibrant city of Mumbai, just like A Thousand Questions made me want to visit Karachi. The story encourages us to open our eyes and see the beauty and wonder of our surroundings, whether they be a real mountain or a tower block in a bustling city. No matter where we are, we can still find places to explore and things to discover if we use our imaginations.

This is a great book that may have particular value to children growing up in inner-city areas who may envy those living in more open spaces.

Tanna’s Owl is a semi-autobiographical book based on a true story from the author’s life. When she was young, Tanna’s father brought home an orphaned baby owl he had found while hunting and charged her with taking care of it. Tanna had to get up at 4 am in order to feed the owl, hunt for food it could eat along with her siblings, and watch out for her hands when the owl whom she named Ukpik (the Inuktut word for owl) would use her razor-sharp beak to snatch at food.

Ukpik never seemed grateful for all Tanna would do to help her, but the two forged a relationship nonetheless. Tanna had to leave her community to attend school, but upon her return, she discovered Ukpik had finally flown free. Tanna finds her emotions conflicted by the loss of her owl, but comes to realize that Ukpik had never belonged to her in the first place.

This is one of those fantastic picture books with an important message at its heart, this story shows children the value of hard work and dedication, even when the subject of your efforts does not show gratitude or love you back. Ukpik is a wild animal throughout the story, never truly bonding with Tanna in the close way a pet would, but that does not lessen the value of Tanna’s work – it may even increase it.

The Power of Kneeling