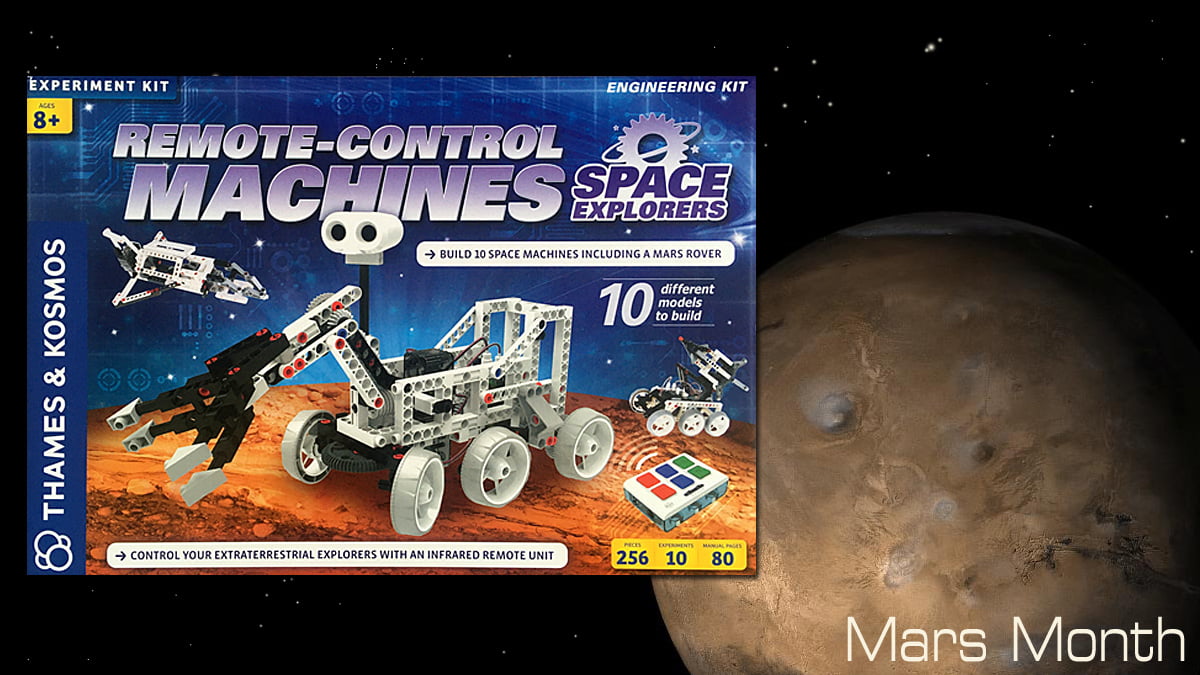 Throughout July, GeekMom is preparing for the planned launch of the Perseverance rover on July 20th with Mars Month, a month filled with Mars-themed content. Be sure to follow the Mars Month tag to find all of this month’s content so far in one place. Today I am reviewing Remote Control Machines: Space Explorers – an engineering kit with a space theme.

Remote Control Machines: Space Explorers is an engineering, robotics, and science kit from Thames and Kosmos that allows kids to build their own vehicles and machines, then control them using a remote device. The kit contains over 250 pieces and is aimed at children aged eight and up, although from experience I’d argue that kids under the age of around ten will most likely need a lot of help from an adult in order to use this kit.

The pieces in the kit are made from strong, robust plastic which will allow them to stand up to plenty of wear and tear as they are built up, taken apart and built into something new. They are tough and chunky and fun to build with whether following the instructions provided or creating your own design.

Obviously a kit like this includes a large quantity of plastic, however, there was little single-use plastic to be found here, only a few bags that could have been replaced with other materials if needed at all. The box was also much larger than it could have been with lots of wasted space along the sides which would allow for some improvement to its environment-friendly score.

The key to using your Remote Control Machines: Space Explorers kit is the Experiment Manual, a full-color letter paper sized book that includes all the instructions you’ll need to build your machines along with background information and more.

Upon first opening the Experiment Manual, you’ll find a detailed content list that you should check against the items in your box to ensure nothing is missing. If there are any missing parts, email addresses are provided for both the UK and US where you can get in touch and request replacements. There are also some tips and tricks to make using the kit easier as you go on.

The machines are split into six sections, each containing either one or two designs. These are:

All these machines include multiple moving parts which can be controlled simultaneously using the three sets of buttons on the remote unit. Some of them are able to move around a room on wheels or feet, while others remain static and move in other ways. For this review, my son and I built the static Probe and the mobile Mars Rover.

Each machine comes with full-color instructions to help you identify parts more easily. The instructions are highly detailed with many steps, the Mars Rover we built had 41 steps to completion while the simpler Probe had 18. The instructions are generally very clear and easy to follow with the odd exception when lots of components have to be attached together at the same moment and the difficulty level of each build is indicated at the top of the pages with either one, two, or three blue dots.

Building these machines can be a physically painful process! In order to make them structurally sound, a reasonable amount of pressure is needed to fit the pieces together securely and within only a few steps I found that my fingers were hurting. I ended up having to build the Mars Rover over two sessions on different days to give my fingers a rest, although this may be less of an issue for folks with more calloused fingers!

The manufacturers of this kit suggest that it is suitable for ages eight and up and while I don’t deny there will be many kids for whom that estimate is accurate, these are intensely tricky models and I imagine many kids will need help if they even stick with it. My ten-year-old has an admittedly short attention span (currently not helped by lockdown and too much Fortnite) but I found he was quick to give up when the instructions started getting complicated and the pieces hard to fit together. I ended up building 95% of the Mars Rover alone and even I as an adult had to walk away a few times after getting frustrated with it. So while younger kids might enjoy handing over pieces and playing with the finished item, building these machines alone will probably be more suited to teens and above.

This was especially true when things didn’t work entirely according to plan. On at least one occasion, my husband and I had to examine the Mars Rover and make slight adjustments to the original instructions to get pieces to sit in better alignment and prevent gears slipping. It took us half an hour of tweaking to solve one issue that was preventing the wheels from gaining enough traction to move the Rover along the ground and I’m not sure the average eight-year-old would have the patience to not simply throw it back into the box.

The Finished Machines: How Well Do They Work?

For all the frustration they cause during the build, the pay-off is absolutely worth it. Both our machines worked brilliantly once fully assembled, the one minor exception being the Mars Rover’s grabber which never seemed to hold together well enough to get a strong grip on anything.

The finished machines are surprisingly large. The Mars Rover is well over 30cm in length, 16cm wide, and stands over 22cm tall with its “head” in place. This does make the finished machines awkward to store if you don’t want to immediately disassemble them, but also makes them brilliant models to have out on display. Who doesn’t want a large “working” Mars Rover sitting in the living room when visitors come over?!

The remote control element works perfectly, however you do need to have the control unit pointed directly at your machine for this to happen, so no hiding around corners to surprise someone! Many of the machines have multiple types of movement that can be controlled with the different colored buttons. On the Probe, one set of buttons controlled the opening and closing of the solar panels while another rotated the communications antenna at the top. On the Mars Rover, one set controlled forward and backward motion, the second set rotated the front axle for turning, and the third controlled the grabber arm at the front. This level of interactivity means that the fun doesn’t stop when the machine has been assembled. The Experiment manual suggests various games and activities that can be played using your new machines – all with a STEM focus that will help kids learn about space and how the real-world counterparts of their machines are helping us learn more about the universe around us.

Remote Control Machines: Space Explorers is an amazing kit that will help keep families occupied for many hours building, playing, dissembling, and then building anew. With ten different options to choose from, there’s plenty of replay value here although kids may be frustrated at having to take apart a favorite machine in order to try building something new.

Adult help will almost certainly be needed during the building stage but the finished machines are robust enough for kids to be allowed to play with them without adults hovering nearby reminding them to be gentle. The Experiment Manual is well-written and I enjoyed reading the background information provided along with looking through the various photos, diagrams, and other extras that help link the things you’re building to real space-exploration.

On the down side, the machines are tricky to build, occasionally frustrating, and occasionally painful too! Disassembly is also tricky because they are designed to hold together and so pulling them apart will take persistence and plenty of elbow grease. The yellow separator tool will be invaluable but even the failed a few times. One handy tip we found is that a pencil will fit through the holes neatly and give you something to grip onto while pushing pins out of place.

Remote Control Machines: Space Explorers will bring space science into your living room and help to kindle an interest in space exploration for both kids and adults.

Trypticon – Great For Collectors. Not So Great For Kids.

GeekMom Editor Talks Ticks and Triops with The Times