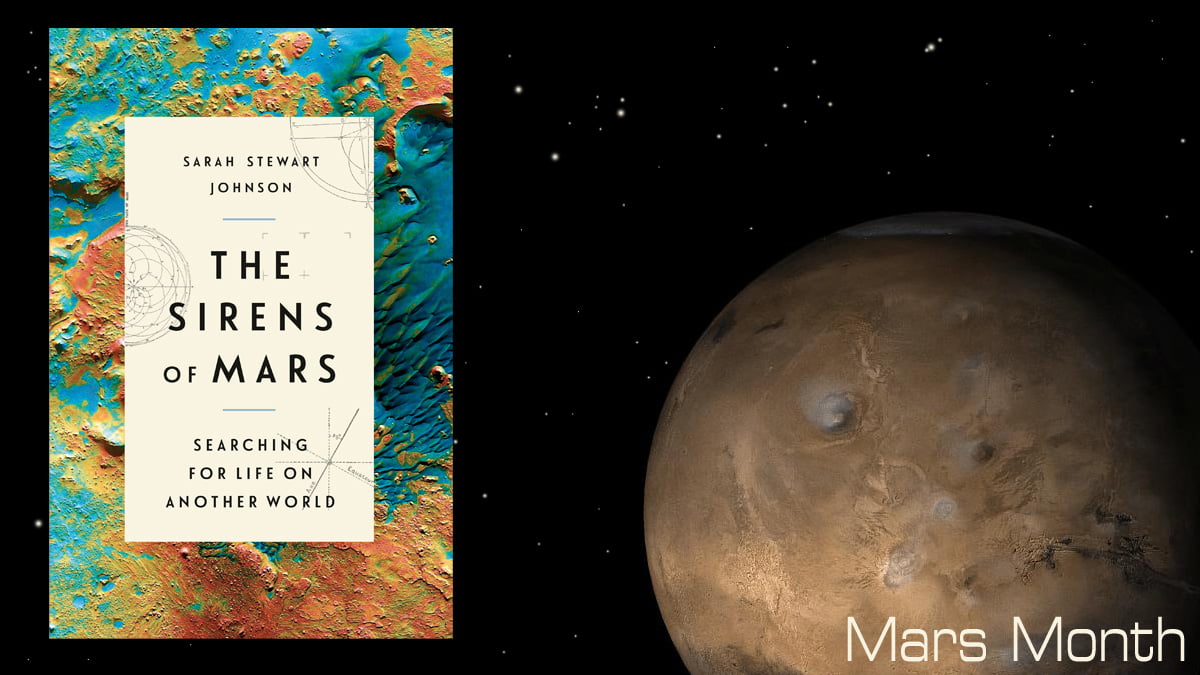 Throughout July, GeekMom is preparing for the planned launch of the Perseverance rover on July 20th with Mars Month, a month filled with Mars-themed content. Be sure to follow the Mars Month tag to find all of this month’s content so far in one place. Today I am reviewing The Sirens of Mars by Sarah Stewart Johnson.

The Sirens of Mars is a part memoir, part historical narrative of the exploration of one of our nearest planetary neighbors. Written by Sarah Stewart Johnson, an assistant professor of planetary science at Georgetown University, the book covers the history of our obsession with the red planet and also the people who helped us to take greater and greater leaps toward understanding it.

As The Sirens of Mars progresses through its eleven chapters, it slowly traces the history of Mars exploration, but this is no dull and dry chronology. The story jumps around in time tying the author’s experiences to those of her predecessors, whether they be the tenured professors working just a few decades prior to her, or the ancient philosophers working away at the great Library of Alexandria. We spend time with Percival Lowell who fought for years to prove that the lines he saw through his telescope really were canals, and with Wolf Vishniac who met his death deep in the Antarctic while busy working to try and prove that life can indeed survive in those harsh conditions.

While the conclusions many of these early Martian pioneers were wrong – the “canals” first identified by Giovanni Schiaparelli and investigated by Lowell may well have been ghostly images of their own retinal veins projected over the planet they were so studiously investigating – what they left behind was their passion, an almost overwhelming desire to make the ultimate discovery, ignited by a belief that perhaps they can change history. It’s something Johnson herself experienced, a moment she shares in the pages of this book, describing the moment as when she “suddenly saw something I might haunt the stratosphere for, something for which I’d fall into the sea… a chance to discover the smallest breath in the deepest night and, in so doing, vanquish the void that lurked between human existence and all else in the cosmos.”

Despite all the great achievements cataloged in these pages, it is Johnson’s personal story that really ties The Sirens of Mars together. We get to follow along with her career from her early college days through to today; her thrill at making a scientific discovery (multiplied exponentially when she learned it had been successfully repeated by an independent team), her excitement at being in the room when the first images of the Endurance Crater taken by Opportunity. Johnson expertly narrates these events, allowing us to see them through the eyes of a young scientist who has really been in the room where it happened and thus allowing us to feel those thrills along with her. I defy anyone to read this book and not step away immediately wanting to ditch their current job and call NASA looking for a new career.

My one criticism of the book is that it contains no images. Countless pages are devoted to describing maps, illustrations, and photographs and these often key to understanding exactly how theories were devised, discoveries made, and passions ignited. I wish I could have seen those images there on the page for myself without having to constantly resort to Google.

The Sirens of Mars is easily one of the greatest works of non-fiction I have ever read, comfortably equalling my beloved Dinosaur Hunters by Deborah Cadbury. The book ends looking forward to the future, explaining the planned landing site for the latest Mars rover – Perseverance – and why exactly that site was chosen. This is a book that knows it is being forced to conclude before the story it wants to tell is finished and Johnson chooses to close it by looking forward with hope and more of the same excitement that colored the previous 180+ pages. Who knows what Perseverance will discover, I just hope Sarah Stewart Johnson will be the one to tell me all about it.

If you’re looking for one book to bring you up to speed on Mars at the beginning of 2020, The Sirens of Mars is the one you need.

The Ultimate-est List of Toys, Kits, and Books to Teach Kids Coding