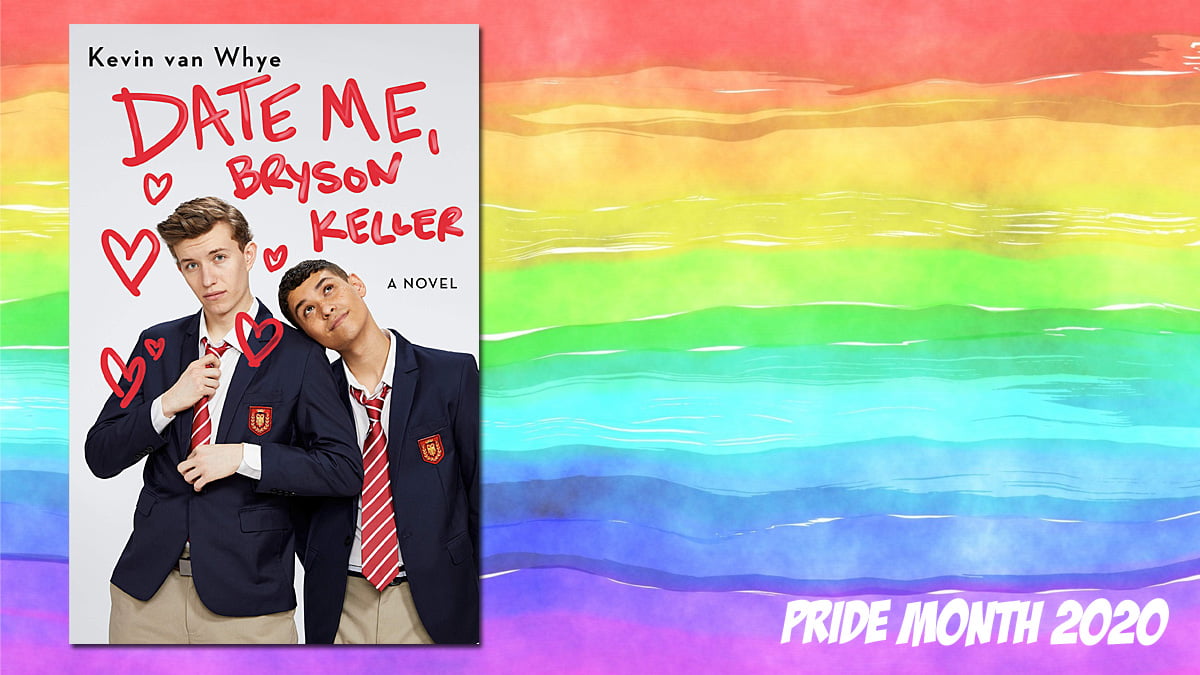 Throughout June, GeekMom has been celebrating Pride Month with lots of LGBTQ content. Follow the Pride Month tag to find all the content in one space and keep checking back for more throughout the month. Today’s book review is Date Me, Bryson Keller by Kevin van Whye. A trigger warning for forced outing applies to this book and review.

Everyone at Kai Sheridan’s high school knows about The Dare. Bryson Keller—rich, handsome, star of the soccer team Bryson Keller—will date the first person to ask him out each Monday morning for one school week. On Friday, it’s over. There will be nothing physical, not even hand-holding, and if he cannot find a date one week, he loses. One rule that was never mentioned is that only girls can ask him. When Kai’s Monday morning is ruined by the Bryson Keller dare and he finds himself partnered with Bryson for an assignment, Kai—who has been hiding in the closet for years—finds himself asking Bryson to date him for the week out of little more than anger and disappointment.

Surprisingly to Kai, the pair hit it off immediately and within only a few days it’s obvious that something more than just joke dating is going on here, but Bryson is straight, isn’t he? Soon, Kai is getting more and more confused and with the editor of the school paper snooping around trying to find out who Bryson is dating this week, he is at risk of being outed against his will. With religious parents at home and even his best friends unaware of his sexuality, Kai’s life is about to change in ways he could never have dreamed of, but with Bryson by his side, perhaps the changes might be worth the risk…

Date Me, Bryson Keller was a sweet if slightly predictable romance. It’s full of cute moments that will make you remember your own first steps into dating—taking pictures in a photobooth, going to the beach, and that heady rush of finding yourself in a new beau’s bedroom with only them in the house—although all these moments are marred by the tension running through them thanks to the risk of being seen, something LGBTQ readers will find very familiar.

Despite its sweet and summery romance-fluff nature, the book does come with a hefty trigger warning for someone being outed against their will which makes the latter half of the book into far more uncomfortable reading than the more rom-com style first act. It also has one of the more realistic depictions of coming out of all the books I read this month. When one of the main characters is outed, they have to deal with a lot of prejudice which manifests in a variety of ways, some more damaging than others. However, they also discover that they are not alone and it is in these moments that they find out who they can rely on most through difficult times.

It was also great to see an LGBTQ romance that wasn’t between two white boys. Kai is of mixed race with a South African father and feels “caught between two races,” expected to like certain things, and perpetually “not Black enough for some and not White enough for others.” This marginalization makes the reality of Kai’s sexuality feel even more difficult for him to live with. He’s already feeling like an outsider because of his race which makes him worry about adding another layer of ostracism by becoming “the gay one” too.

One of my favorite characters in Date Me, Bryson Keller was Kai’s younger sister Yazz who he describes as “thirteen years old but has the personality of a middle-aged woman who yells at the neighborhood kids to get off her lawn.” Yazz knows her own mind and her response to their parents after their initial reaction to the forced outing is brilliant. She is exactly the type of person I would want in my corner during a crisis and I’d love to see another book in this universe with Yazz as the main character.

There are some problematic elements to this book. First, sexuality is presented throughout as far more binary than it really is. Kai constantly wonders whether Bryson is really gay or straight, never once thinking that he may be bisexual, pan, or anything else. Bryson offers up the suggestion of bisexuality once but it’s very much a throwaway line and never mentioned again with the story immediately snapping back to binary options only. Secondly, the premise bears very strong similarities to a 2009 manga called Seven Days by Venio Tachibana. I haven’t read that manga myself (I didn’t even know it existed until after I finished this book) but concerns have been raised about male authors “profiting off the ideas of women of color” and so you might want to read through a description of the plot line of both books and also the author’s comments on the accusations against his story, before diving in.

Date Me, Bryson Keller wasn’t the greatest book I read this month and its problematic elements are enough to give some folks pause before picking it up, but if you choose to, this was largely fun and very easy to read too, taking me just a couple of sunny afternoons to get through it which will hopefully make it a great summer read.