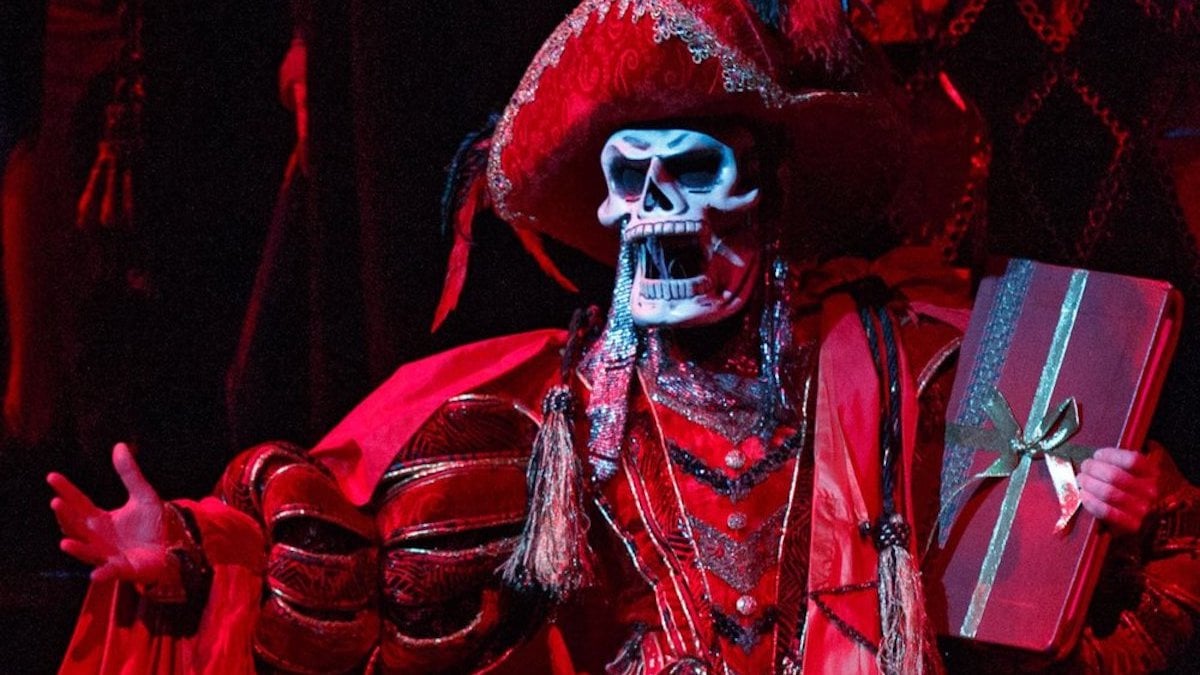 Everywhere you look today, you can’t escape masks. Since the COVID-19 social distancing, masks are required or suggested to wear. There are masks we make ourselves, masks we are selling each other, and masks we are showing off like fashion statements.

To get our mind off this constant talk about masks, I want to share some fun facts about, well, masks! Movie masks, that is. Here are 15 random and geeky facts about just a very few of the many famous masks from movies, television, and the entertainment world.

1. One of the most famous masks in the movie world, Darth Vader’s mask, was just going to be a scarf covering his face, according an article from the movie site Screen Rant. George Lucas and costume designers soon scrapped the scarf for a mask and helmet, as Vader needed something that could help keep him alive in alignment with his back-story.

2. Many fans know Darth Vader’s mask, like much of the Star Wars saga, takes inspiration from the stories of Japanese samurai, and Lucas was particularly influenced by the Akira Kurosawa’s 1954 classic Seven Samurai. There are many similarities between the look of Darth Vader’s helmet and that of a samurai warrior.

3. One actor who has spent plenty of time behind a mask is Tom Hardy, and at least three of his most famous roles (not including Venom) are spent with the lower half of his face obscured by masks much of the time. This fact even became a joke among fans, and even movie site Rotten Tomatoes called him “The Man in the Mask.”

4. You can’t talk about movie masks without mentioning the movie The Mask, based on the much more sinister Dark Horse Comics series by Doug Mahnke and John Arcudi, in which “The Mask” commits several murders in cartoon-like ways. In the movie, the big teeth that were a prominent part of actor Jim Carrey’s mask were originally intended for use only in non-speaking scenes. Carrey, however, figured out how to work with them, and they helped make his character more quirky and animated.

5. The back-story on the mask found by Stanley Ipkiss was cut from the original movie, which showed the Vikings burying the mask of the god Loki. However, in mythology there was no “Mask of Loki.” That was a completely made up concept for the story.

6. One of the standout scenes in the 1987 fantasy film Labyrinth is when Goblin King Jareth (David Bowie), lures the young Sara into a dream-like trance to attend a masquerade ball, a sort of symbolic moment where she is torn between the fantasies of her childhood and her coming of age. The masks used in the scene were designed to be parodies of the goblins created for the movie by Brian Froud.

7. The Labyrinth masquerade scene inspired a fan named Shawn Strider to create a Labyrinth-themed event in 1997, “Labyrinth of Jareth Masquerade Ball,” in Los Angeles. The first event drew around 150 guests, but the elaborately costumed gala has grown significantly, drawing more than 5,000 guests who can spend anywhere from $35 to $400 for tickets. Brian Froud even took notice of the event in 2003, and suggested the ball take on different themes as well. Past themes have ranged from Shakespeare to Tolkien.

8. In most comic book-based movies, masks are essential to characters not just to hide their identity, but in some cases to serve as protection or as a tool or weapon. This includes Batman’s iconic cowl. In first of the Christopher Nolan Dark Night Trilogy films, Batman Begins, Bruce Wayne ordered at least 10,000 cowls from Singapore (with an additional 10,000 sets of “ears”) from China to help creat his mask. When Alfred tells him how much he needs to purchase to “avoid suspicion,” Bruce replies, “Well, at least we’ll have spares.”

9. One of the most popular entertainment competition shows on television is The Masked Singer, inspired the South Korean competition King of the Masked Singer that also spawned other international versions of the competition. Costumes for the show, in which celebrities try to stump a panel of judges singing behind elaborate masks, were designed by Emmy-winning costumer Marina Toybina. She was often inspired by other movies such as Donnie Darko, the Narnia series, or Edward Scissorhands.

10. Horror movies have produced some of the most recognizable masks in movies, from Mike Myers’ Halloween mask to Leatherface’s mask in Texas Chainsaw Massacre to the elongated Scream ghost mask. One of the most famous is Jason Voorhees’s now iconic hockey mask, but it wasn’t part of the Friday the 13th series until the third movie. As filmmakers debated what he should look like in this latest installment, 3D supervisor Martin Sadoff was a huge hockey fan and remarked Jason should just wear a “goalie mask.” The mask is now one of the most famous images of the franchise.

11. Friday the 13th isn’t the only horror movie to take advantage of hockey masks. According to Mental Floss, Hannibal Lecter’s mask in Silence of the Lambs was created by frequent National Hockey League (NHL) goalie mask designer Ed Cubberly who was asked to create a mask for “a schizophrenic who goes around biting people.” The result is a mask with the bottom half of on old goalie mask with bars inserted in the mouth hole.

12. In a 2017 issue of Entertainment Weekly, Donnie Darko writer and director Richard Kelly talked about the origin of Frank, or “that stupid bunny suit,” and mask, as Kelly called it. Frank is the six-foot-tall rabbit who warns Darko of impending global doom. The suit and mask were created by April Ferry, who later worked on Game of Thrones, and was intended to really be disturbing and have an impact on audiences. Although the original movie was a flop, it became a cult classic, inspiring tattoo designs, artwork, and merchandise based on Frank’s mask. One of the original masks in the film was purchased by Darko fan, Metallica’s Kirk Hammett.

13. One of the of the more famous masks on Broadway is the simple white half-mask from Andrew Lloyd Webber’s Phantom of the Opera. The mask worn by Gerard Butler in the 2004 movie version sold on eBay for £6,450 (around $8,050).

14. The Phantom didn’t always have a slew of amorous fans, as the unmasking of the 1925 Lon Chaney villain in Phantom of the Opera was considered so traumatizing, some fans were reported to have fainted during the reveal.

15. There is one more mask from the Phantom movies (and the musical) that is also popular: The Phantom’s skeletal “Masquerade” mask, which draws inspiration from Edgar Allan Poe’s story, “Masque of the Red Death” (about a fictional plague). The skeleton mask also is a hint of our own mortality. “Memento Mori.”

Here’s a look at the movie version, which admittedly isn’t nearly as interesting as the various designs from the live performances:

Even when this pandemic is all over, masks will still be a prominent part of the motion picture and pop culture world. Charles Hart, who wrote the lyrics for the Webber’s musical, reminds us in his words to “Masquerade,” it is what is behind the mask we often try to hide.

Masquerade!
Paper faces on parade…
Hide your face so the world will never find you….

In the mood for a little mask-making? Try these three carnival style mask ideas with some real-life cultural or historic influences, including masks featured in the Harry Potter and Doctor Who franchises, and Big Hero 6.

Young Justice — An Interview with the Producers