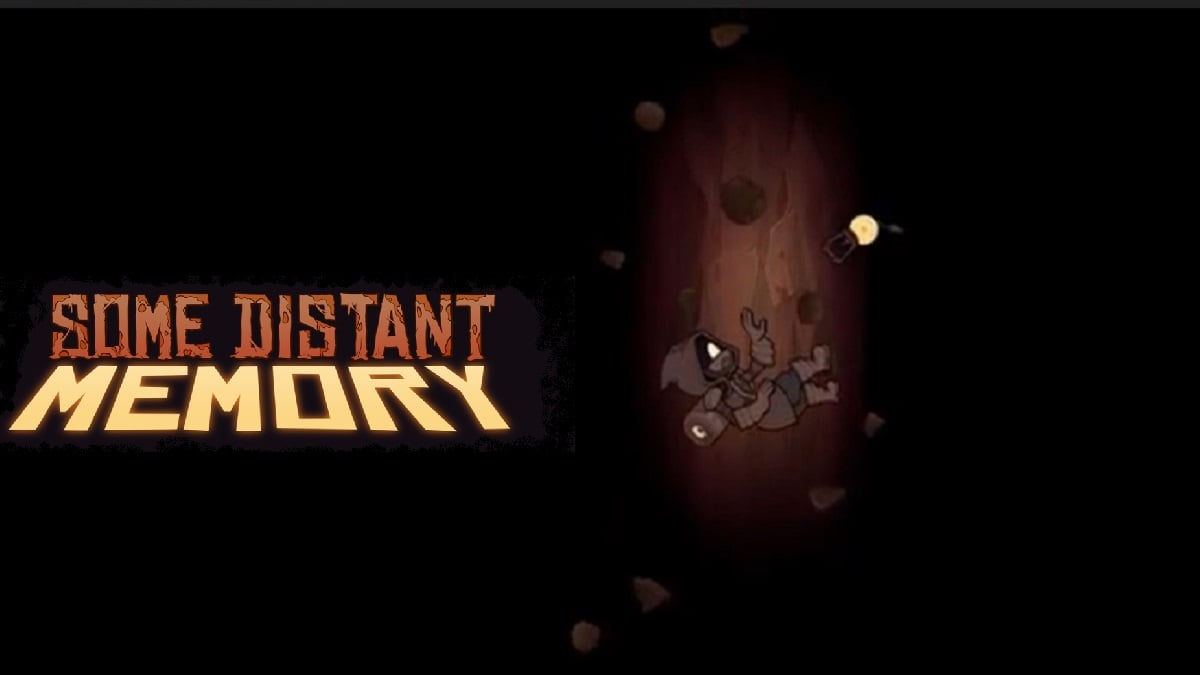 Creativity is the core of our humanity. Yep, I said it. I am putting it out there. And I have found a computer game that absolutely backs me up on this. A game where you are searching for pieces of the past to save your future and all of the secrets lie within creative artifacts from a (not so) bygone era. Some Distant Memory doesn’t shy away from our highly possible post-apocalyptic future, however, it gives us a sweet and gentle game-play filled with hope and potential for a better outcome. It perfectly balances along the precarious edge of ‘strong environmental messages’ and ‘ignorant denial’, leaving me refreshed and motivated to do something more. This is potentially my favorite computer game of 2019.

What is Some Distant Memory?

Some Distant Memory is a beautifully animated, story-telling, exploratory game. It is developed by Galvanic Games and published by Way Down Deep. It has elements of puzzle-solving but it is more dependent on story-telling and history-building. It is a journey in creative arts, with the game progressing through news articles, poetry, short stories, sculptures, everything. This is the game that puts the A in STEAM. 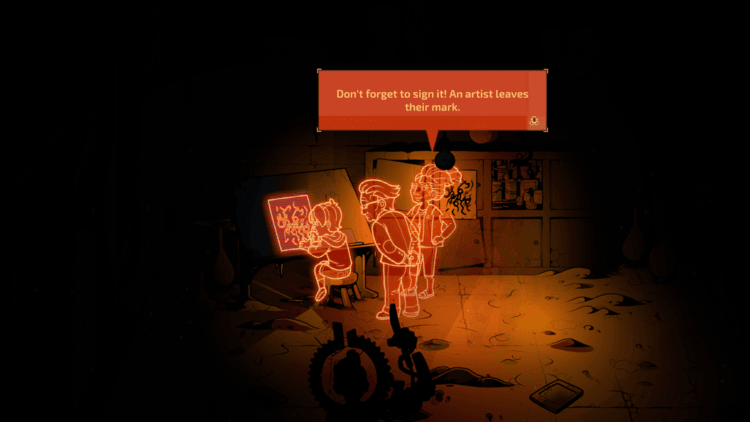 The game is set 300 years in the future after the majority of the world has succumbed to toxic algae or “bloom” taking over. Humanity struggles to exist within a few colonies remaining on earth, powered by whatever scraps they can find amongst the ruins. You play as the Professor, accompanied by artificial intelligence creation ARORA. Each colony has its own strengths and focus to contribute towards humanity and survival; as the Professor, your job is to study the history of the Sunken City and find a key to the future. While most are practical with their search for remnants of the past, the Professor is looking for memories; stories and pieces of the history of humanity to learn more about our behavior and how that contributed to our demise.

Where most post-apocalyptic stories will have you focused on the engineering and science concepts for survival, Some Distant Memory is about changing the future by learning from the past; artistic expression in all its creative glory. The initial concept of the game, and the Professor’s story arc is to discover the Sunken City and rebuild the stories of history to learn what caused the Bloom. However, to rebuild history, the Professor needs to find specific clues for ARORA to piece together the ‘memories’ and provide a display on scenarios. This includes letters, poems, newspaper articles, sculptures, drawings, stories, research, computer games, and photos. It really is an all-encompassing example of how the creative industries display all that we are in social behaviors.

I reviewed this game on my Nintendo Switch, however, it is available on both Windows and MacOSX through Steam. It is really easy to control and explore, as the character moves around rooms and maps with ease. The map itself is simple in its identification, with plenty of allowances to re-visit when circumstances change (and they will). One of the things I loved was the ability to scan a room for hidden objects, however, you can’t afford to be complacent with this feature because it may bite you later on.

The game also includes memory within your play itself. Each ‘artifact’ or item you find contributes to the memory building from ARORA. Once the memory has been activated, you can go back and play it at any time. Of course, it is up to you to remember the details enough to trigger the need to replay.

In the beginning, the game is a little slow in the progress – for my personal taste. It is very much a guided effort, rather than an open-plan exploration. You have the freedom to choose where you explore within the map but it is still guided through the map itself. For this, I could have done with a little bit more speed but not too much, or it would take away from the beautiful storytelling. It does pick up towards the end as you begin your escape from the city. 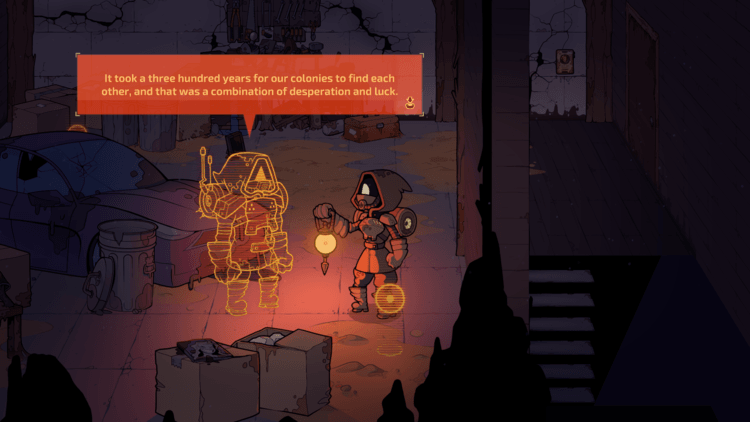 All of the art in this game is hand-drawn, in a comic-book-style fashion with shadow-puppet-style movement. It is simple and beautiful, with an elegant touch to the additional artwork within the story itself. It’s not just the animation in the game. It’s in the way the game incorporates all elements of creativity to re-tell the history of humanity. In our current real-life world, we have been bombarded with news telling us to focus on English and Maths only; even then, we are only allowed to explore the basics and not be tempted to creative writing or theoretical mathematics. The shouting from anti-intellectualism has consequently suffocated the voice of creative expression and stifled our imagination – a key factor in any hope we may have for problem-solving our future. Some Distant Memory touches upon this very issue, including creative expression as pieces of the historic puzzle to work towards fixing the future. A short-story on futuristic ships is connected to a sculpture blurring mythology and machines while reflecting on a poem of love and respect. The design of these elements carries enough memory to be recognizable to the player while also having a fresh taste to encourage further exploration. 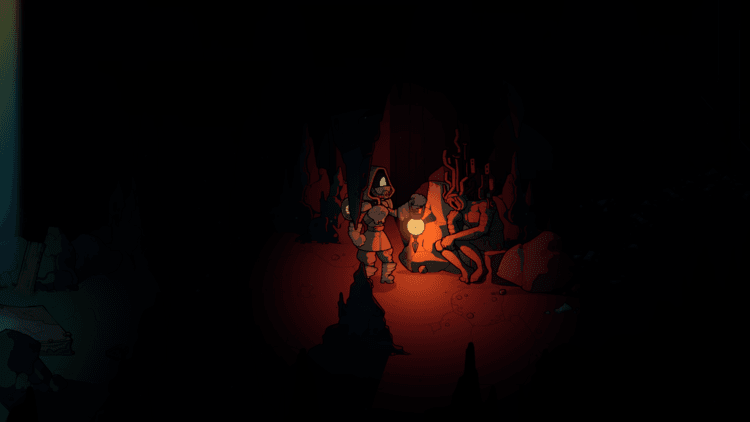 Again, the balance with the story-telling is amazing. The music is in no-way overpowering nor is it distracting or too pre-emptive. Often I find games where the music change is a big spoiler for what is around the corner, and yet that is not the case for Some Distant Memory. It has a very melancholic yet supportive feel, filling the emotive space around your exploration.

BTW: there is no spoken dialogue between the characters. The sound effects give the impression of speech but the conversation is scribed on to the screen for you to read. And on that note, you can tell a real writer was involved in the script-writing. There is something natural and fulfilling and detailed in the storytelling, right down to the conversations between the Professor and anyone else you speak to.

The soundtrack is created by Amos Roddy, who some gamergeeks may recognize from previous work on Kingdom, Kingdom: New Lands, and Kingdom: Two Crowns.

Some Distant Memory gives you a chance to imagine how future generations will look back at us. And while it captures all the nostalgia we are desperately clinging on to now, it also shines a light on enough of our flaws to show the mess we are going to leave. The game never hides from its core emphasis on environmental awareness and our narrow-minded views of ‘how to fix it’. It is no coincidence we published this review on Nov 29, with students striking once again all around the world. Some Distant Memory is a beautiful game, reminding us of who we once were: creative, loving, curious. It is also a beautiful story to show us how we can use these elements to save our future. This is a calm, non-violent, and character-driven story that still leaves you with a sense of hope and motivation to make a change.

Some Distant Memory is available now on Nintendo Switch and Steam for USD$12.99/AUD$15.49/£9.99. Some Distant Memory features English, Japanese, Simplified Chinese, Russian, and German language support. Full play is approximately 3-hours, dependent on how much exploration and history-building you do. It contains a few lesser swear-words and discusses some moderate-level environmental consequences. It is suitable without question for 13yo EG Sinister, with some question for 10yo EG Nefarious (due to sensitivity for environmental issues). Totally not for 6yo EG Zaltu (attention span). 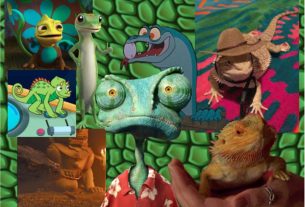