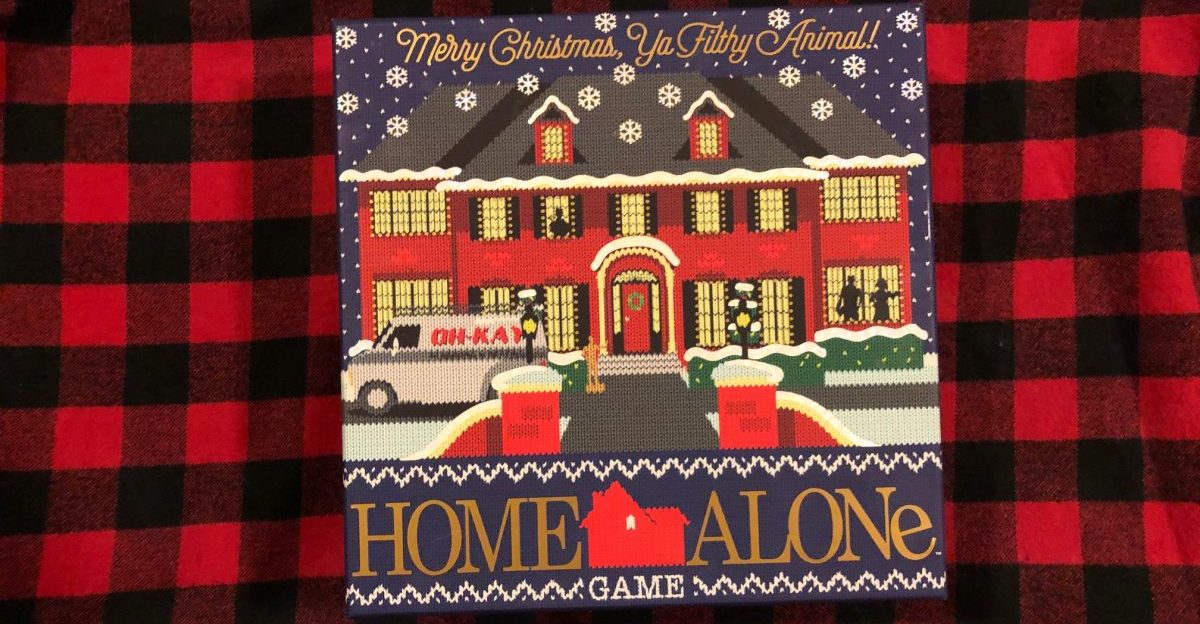 During October and November, we will be reviewing a selection of new games ideal for families during the holiday season. Today’s pick is Home Alone. All the games in this series are easy-to-learn, family-friendly, reasonably-priced, and a whole lot of fun, making them perfect for family get-togethers and playable by everyone from kids to your great-grandma. Check out the Games for the Holidays tag for more.

What Is Home Alone?

If you have to ask, I’m not sure we can be friends anymore. Home Alone the game is based on Home Alone, the 1990 holiday classic starring Macaulay Culkin. It is a card-based game for two to four players: one versus one, one versus two, or one versus three. The recommended age is eight and up, which seems appropriate. We have been successfully playing with our seven-year-old, but his four-year-old sister really prefers 52 pick-up.

This game is published by Big G Creative, who is also responsible for The Wizard Always Wins, one of our all-time family favorites in all age groups. My son’s first reaction as we un-boxed Home Alone was that, style-wise, it looked like The Oregon Trail Card Game. The illustrations on box, board, and cards all have the appearance of being knitted. This gives it a wonderfully tactile vibe but also makes me want a knitted sweater with the McAllister house on it. The production value is high on this game. The cards and game boards are made of sturdy card stock and will withstand the test of time. The box is moderately sized at 8.5″ by 8.5″, a bit wasteful on space inside, perhaps, but it is nice and sturdy so will make for excellent storage with the Christmas stuff. The knitted theme continues on the decks of cards and makes for a really kitschy collection of images from the movie.

How Do You Play Home Alone?

The basic game calls for two players, and the instructions encourage you to play the two-player version first in order to familiarize yourself with gameplay. After you have the basics down, the rules to add in a third and fourth player are simple. The rules may seem a little daunting at first blush, but it is a remarkably simple game that offers a lot of entertainment; you won’t remain daunted by the second or third round.

Setup is easy. To begin with, you need to position yourself as either the wet bandits or Kevin. Both are equally fun to play as, but we have found that the mischievous ten-year-old of the house far prefers being Kevin. Each of you gets a player board, which has space for your action cards. The Kevin board has space for a die depicting various paint cans, while the bandits’ board has space for their stolen loot. The cards also point to where you should start your individual discard piles. Cards depicting three entry points to the house are placed between Kevin and the bandits: the front door, the downstairs window, and the upstairs window.

The game is played and further set up in five distinct phases. In the first phase, you simply draw cards until each of you has six cards in your hand. Less are drawn for the bandits if you are playing as a team.

The second phase is the “loot phase.” Kevin draws three loot cards and shows them to all players. The bandits need to pay attention to what loot is up for grabs because they will not see them again until they have defeated the traps. During the loot phase, Kevin chooses which loot will be placed in which location, but does not reveal the location to the bandits. Thus the bandits do not know which location will yield a high-value item or a piece of pizza!

Next is the trap phase. From the six cards in Kevin’s hand, he places traps at any number of locations. He does not have to use all his traps, and there are also decoy cards that set no trap but deceive the bandits into thinking there might be. Some of the traps contain special abilities that are only activated when the bandits set off a trap. When the traps are all set, the bandit phase begins.

During the bandit phase in a two-player game, the bandits must decide which room (if any) to attack first. Looking at the number of traps laid out, and bearing in mind the “break-in fee” on each location, they must decide which loot to go after first. Once the decision has been announced and the entry fee paid, Kevin turns over the first trap. There is a break-in fee for each location in order to cripple the bandits as they enter, much like lightbulbs on the floor or a burner on the door handle.

The first trap turned over is always the trap closest to the location card. If there is a paint can symbol on the trap, Kevin rolls the die. The bandits must then discard a card that matches the Christmas light that comes up, reducing the bandits’ hand and therefore their chance of success. After the paint can penalty, the bandits have to determine if they are able to beat the trap, if they have to take the “pain,” or if they are going to retreat. When attempting to beat a trap, there are two options on each of the cards. You can either play matching Christmas lights to beat the trap, or you can pay the penalty by forfeiting the specified number of cards from your hand and/or deck. Once all traps in a location have been defeated, the loot card is turned over, and the loot is loaded into the bandits’ truck. In the bandit phase, the bandits can try and enter all three locations or none of them. When the bandits decide to retreat from any remaining locations, the round is over.

The fifth phase is a simple reset of the game area. The remaining loot cards played by Kevin at the three locations are discarded, as are any remaining set traps. If the bandits chose not to attack any of the locations, all loot and traps are discarded. This reduces Kevin’s hand without the bandits losing anything from their hand. But they will have lost the chance at those three loot cards. Both teams keep any cards remaining in their hand, and both will draw back up to six during the first phase of the next round.

Play continues in rounds of five phases until there are no cards left to draw into the bandits’ hand. If Kevin runs out of traps before the bandits run out of cards, the loot phase must be followed, but no traps are set, and the bandits can obtain the loot simply by paying their entry fee.

Each player, whether Kevin or the bandits, has a few special cards in their deck that will turn up randomly. The bandits have six action cards that can be played at any time during the bandit phase. There is no limit to the number of action cards the bandit may play. Action cards can be discarded to pay location break-in costs or penalties, but then the actions are ignored.

Kevin has two kinds of special cards. The first are decoy cards. These are bluff cards that can be played to mislead the bandits into going after a low priced item. The second are identical to regular trap cards, but they have an additional action on them that activates when the trap is tripped.

Winning Rounds and Winning the Game

At the end of the round, success is measured by how much loot was successfully stolen. Ultimately, each player wins the bigger game in different ways. If you are playing as Harry and Marv, then you have to steal goods totaling a set amount in order to make a successful getaway. This varies depending on whether you are playing the 2,3, or 4 player version of the game. Once you have hit your total, you have won and the game is over.

If you are playing as Kevin, then your goal is to defeat the wet bandits. This is accomplished if Harry and Marv run out of cards to play and have not stolen enough from the McAllisters. Then the wet bandits go to jail and Kevin wins. If the bandits run out of cards but have stolen enough, then Kevin does not win. During our first game, when I drew the last bandit cards into my hand, we determined there was no way for me to avoid jail. But the game was not quite over yet. As my ten-year-old laid out his cards he exclaimed, “No! I want to see you fail! I want to see you fail bad!” So the game feeds into the same schadenfreude as the movie; there is pleasure in the pain of others, especially when it involves swinging paint cans.

Should You Buy Home Alone?

Within 48 hours of getting this game, we had already played it half a dozen times, each time with different members of the family. My ten-year-old gives this game a ten out of ten and is currently choosing nightly between this and Munchkin. The game can get exciting, but it’s certainly not manic. It can easily be played before bedtime with no real ramping up of the adrenaline!

My husband and I are always on the lookout for fun, two-player games for after the kiddos have gone to bed, and Home Alone is also really fun for just us. This would be a great game to play on movie night or a great Yankee swap gift at any holiday party. Home Alone is a great game with a fun premise that stands up to being played time and again. It’s a great game even if you aren’t a fan of the original movie. I look forward to a Home Alone 2 expansion pack in future years! 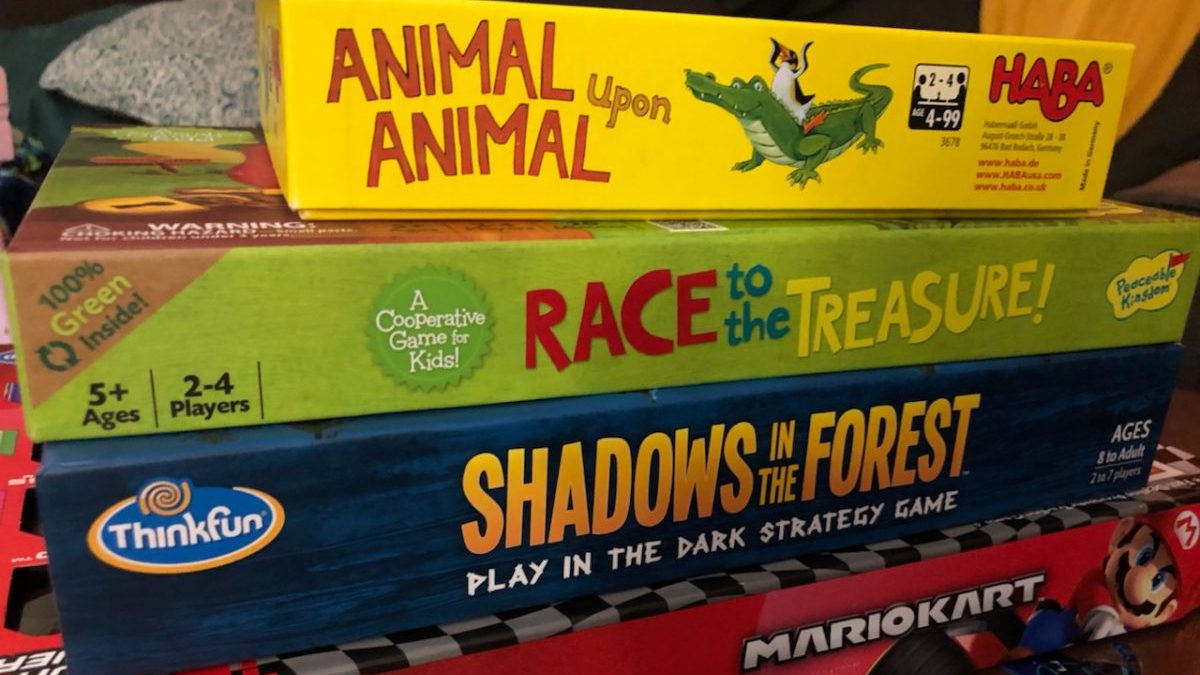 1 thought on “Family Games for the Holidays: ‘Home Alone’”