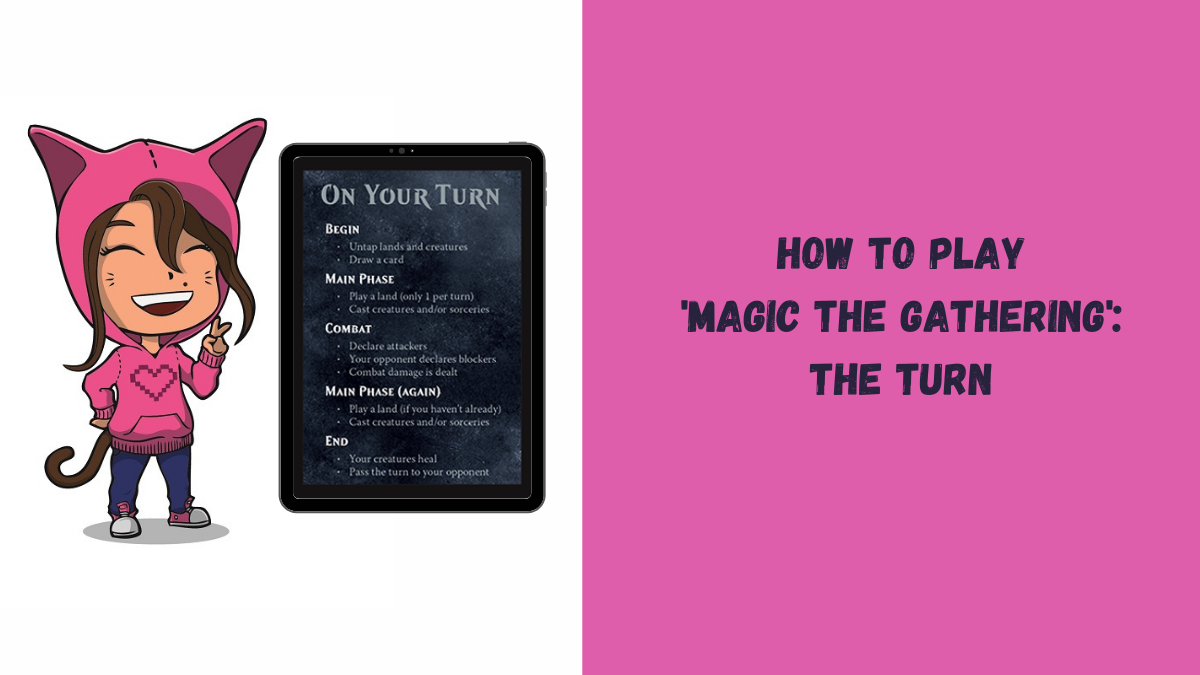 Welcome back to How to Play Magic: The Gathering! Today we’re talking about the turn order, and taking baby’s first Magic turn!

If you’re following along with the series,  you have a 60 card deck, either digitally or in paper form, to play with! If you’re confused, you can start here with Baby’s First Magic Deck part 1 and part 2.  In this episode, we’ll teach you how to take the deck you built, and play it against other people. The “turn” in Magic is made up of a sequence of steps known as the Turn Order. If you’re playing in person, you can roll dice to see who goes first. If you’re digital, the game will auto-roll for you. Either way, if you win the roll you can choose whether to go first or draw first.

For this exercise, let’s say you decide to go first, forfeiting your first draw step.

There are 5 phases in every Turn Order: Begin, Main Phase, Combat, Second Main Phase, and End. Each player takes their turn going through each phase of the Turn Order until they are ready to “pass the turn” to their opponent(s). Your starting hand is 7 cards, which is also the maximum hand you can have at any given time unless you have a card out that says otherwise. If you’re not happy with your 7 cards, you may mulligan, or put your hand back into your library and redraw. According to official rules in most play types, every time you mulligan a hand, you lose a card. If I mulligan twice, my starting hand is now 5 cards instead.

Now that we have our hand, and we’ve decided to go first, our first Begin phase is non-existent. However, that doesn’t mean the Begin step is worth skipping over. In every turn, except the first one, the Begin phase is when you untap any used Land or Spell cards on the battlefield and then draw a card. This can trigger cards that have abilities like every time you draw a card create a 2/2 creature token. Even if your hand is missing those draw cards, you’ll know you have a guaranteed draw every Begin step.

Your Main Phase is when you can cast most Spell cards and your Land card. You can play one Land card per turn unless you have a card that says otherwise. Remember, your Land cards are used to cast your spell cards. It’s not uncommon to spend your first couple of turns laying the foundation of Land cards for your future spells. During your main phase, you can cast as many Spell cards as you have mana to cast them. When you’re ready, and if you have any creatures out to attack, we move onto the Combat phase.

This phase is a little more complicated and is made up of three phases, declare attackers, opponent declares blockers, and then combat damage is dealt. If you cast a Creature Spell card during your Main Phase on this turn, it has summoning sickness and won’t be able to attack until your next combat phase. It can still block this turn, so don’t get discouraged.

Your first job in Combat phase is to declare attackers (if you have any). You can choose between attacking your opponent or their Planeswalker. You cannot choose to attack a specific creature unless the card your using specifically says you can. Once your attackers are declared, you cannot undeclare or change your mind. Just because you forgot about your opponent’s 3/3 Hydra or their Instant card in their hand doesn’t mean you get to undeclare attackers because your Wolf Pup isn’t going to make it through, so choose wisely. Most creatures tap to attack, so it may be wise to hold your creatures back for your own blockers next turn.

During combat damage, the Stack resolves. The attackers attack, the blockers block, and anything cards cast in between, resolve according to the Stack rules. Damage is dealt. Cards move to the Graveyard. This ends the Combat phase, and the Second Main Phase begins.

The Second Main Phase is after Combat. This gives you another chance to play a land, if you haven’t already, cast any other Spell cards you need to this turn, or any other trickery you can think of. This is handy if you have any newly drawn cards to play you didn’t have during your first Main Phase, like Land. So, let’s say you didn’t have any Land to play during your first Main Phase, but now that you drew a card during the Combat phase, you have the Land to cast that Creature card. You can cast it here. Unless it has Flash, then you can cast it whenever you want!

The End phase is when all damage dealt to and from creatures is healed up and the turn is passed to your opponent. The only spells that can be cast during this phase are Instant cards. I’m in the process of paying more attention to this step. There are a lot of things you can do at the end of your opponent’s turn before your turn begins and your Mana untaps. Your opponent’s End step is a good way to get those Flash creatures cast, before your turn.

It reminds me of casting Goodberry, as a moon druid before a long rest. It’s a legitimate strategy. 🙆‍♀️

There you have it! Seems easy, right? Begin, Main Phase, Combat, Main Phase, End! The complications come with the Stack, and, yes, we’re going to talk about it, just not on this post, because… well… it’s complicated… The first couple of years, I didn’t quite understand the importance of “the Turn” or “the Stack.” It seemed like a lot of rigidity for something that is supposed to be fun. Over the years, it’s grown on me, especially as the card abilities become more complex. Learning this framework, in the beginning, will save you a lot of headaches later on.

If you’re ready to see it in action, you can check out my streaming channel,  where we play Magic: The Gathering Arena every Monday and Friday! Bring your questions, your favorite beverage, and come play some Magic with us!

Comic-Con All Year Round: The Comic Con Museum

2 thoughts on “How to Play ‘Magic: The Gathering’ – The Turn”