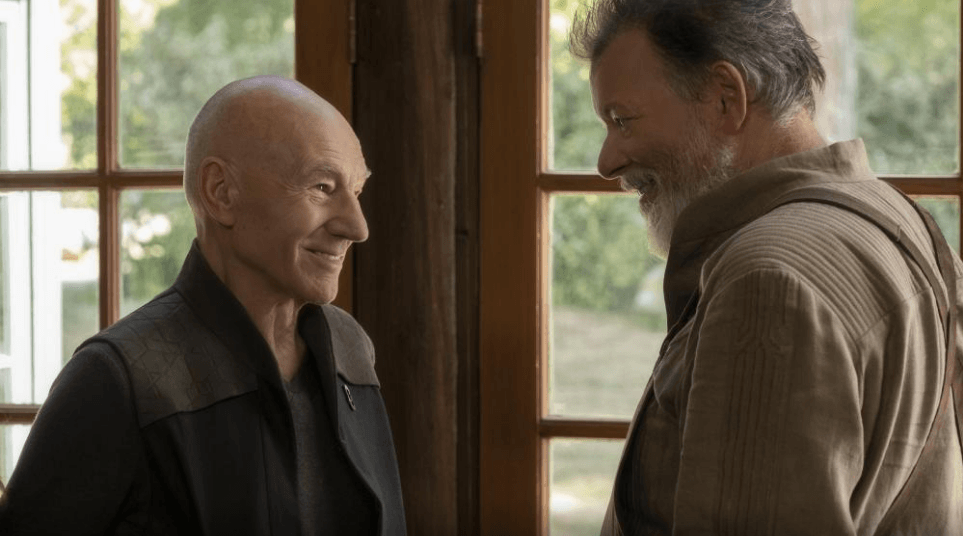 In just a few short Stardates, we will see the return of Patrick Stewart as Captain Jean Luc Picard, in the show of the same name. Since the release of the trailer earlier this year, I have been mildly obsessed, well moderately obsessed, well okay here’s the thing. When I was younger, my parents would record Star Trek: The Next Generation on VHS to watch together while I slept. In my youthful ignorance, I wondered why they spent so much time watching Sting music videos, because all the tapes were labeled STNG. When I eventually partook of the show myself, I was completely hooked. Commander William Riker is my longest lasting crush, going on twenty-five years. In fact in certain lights you could mistake my husband for the post season two Riker. In other lights you could mistake him for David Tenant, but we’re not here to talk about my predilections.

What we do need, is to get back into the universe we left oh so long ago. Another trailer dropped again this past weekend, and I am dying over here. Assuming any fan of the original show is going to be re-watching “All Good Things”, if not the entire seventh season, here is a list of Picard-centric episodes to help get us re-engaged.

“Why do doctors always say the obvious, as though it’s a revelation?”
“Why do captains always act like they’re immortal?”

I know many people who would argue that season one should be left in the past, but you can’t ignore your history. It is in this episode, that we are introduced to the early days of our beloved captain, and the infamous “Picard Maneuver.” In the Star Trek Universe, the Picard maneuver was a tactical invention of Picard, whilst aboard the Stargazer, and under Ferengi fire. In the maneuver the ship appeared to be in two places at once. In fandom it came to refer to Patrick Stewart’s habit of tugging on his shirt when standing up. For the curious discussion of headaches alone this is a worthy episode, but it is one of the first to really look at the vulnerability of the great man, something that is played out in many future episodes to great acclaim.

Any episode involving Lwaxana Troi is a must see in my book. She ironically brings a lot of humanity to each episode she is in, at least humanity as we know it in the twenty first century, lavishness, lust and the kind. Through her eyes we get to see Picard as a man, not just a Captain. In this episode, Lwaxana is experiencing a heightened sexual appetite as a result of the Betazoid version of menopause. She has once again set her cap at Captain Picard, and it is one of the best long running gags of the show that she chastise him for his “naughty thoughts.”

“Like you. Different in appearance, yes, but we are both living beings. We are born, we grow, we live… and we die. In all the ways that matter, we are alike.”

The Enterprise is sent to help repair a research station, on a pre-warp age planet that is being observed by Starfleet. A comedy of errors leads to the people of the planet believing that their god walks among them as “The Picard.” What do you do when a people group mistakes you for their god? This episode gets to the heart of what Starfleet believes about the innate, what we would call, humanity, in every being. As Picard attempts to show these people that they are more alike than different, his ruminations on appearances and reality are compelling, and exceptionally relevant for 2019.

“From the moment I met you, I knew you were going to be trouble.”
“You look like a man who could handle trouble.”

As the title indicates, in this episode we see Captain Picard on holiday, which I have always found odd considering it is called a vacation in the US, and a holiday in the UK. Whilst attempting to relax, he meets a woman called Vash, who takes him on a wild archaeological adventure. Ultimately their adventure leads not to longstanding love, but to a discovery at the very apex of the creation and existence of the universe. Vash is one of the most compelling minor characters in The Next Generation universe, and a love interest that is actually real, unlike the temptations of Lwaxana Troi. In this episode we get to see Captain Picard in the role of Indiana Jones instead of Starship captain, and it is everything you want it to be.

If short on time I would definitely skip over “The Best of Both Worlds”, the season 3 finale and season 4 opener, in favor of the subsequent episode, which focuses on Picard dealing with what he has done as Borg. He returns to the family farm in France and we get to see him for the first time as younger brother, uncle, brother in law, resident of Earth. It is wonderful and sentimental, it is cathartic and engaging. There’s a little schmaltz thrown in there with all the hard hitting truths, but just the right blend. Picard coming face to face with his own nightmares is chilling, and I would think some of these same emotions are to be drawn upon in the upcoming series.

“Darmok and Jalad… at Tanagra”

This episode has been oft debated since it first aired, but in my humble opinion is one of the most exceptional pieces of writing, and societal commentary in the Roddenberry-verse. The Next Generation often employed the template of having a member of the crew held hostage, and in each case it provided great insight into their character and development. In this case, Picard is kidnapped and held on a planet with a single member of a race who speaks only in metaphor. As the two are hunted by an unseen assailant, they must learn to communicate though they share none of the same linguistic types. I feel a theme running through all these Picard-centric episodes, that we can still learn a lot from the 24th century about communication skills.

“You’ve been dreaming about that starship of yours again, haven’t you?”

This is perhaps one of my favorite episodes of any show. Picard wakes up to find himself on a foreign planet, one without starships, without the Federation and on which he is an iron weaver and erstwhile scientist called Kamin, and not the Captain of the Enterprise. The whole episode plays out over 25 minutes of Captain Picard’s life, but decades for Kamin. Picard lives an entire life, has children and grandchildren, and then watches his sun slowly die. At the end of his long life, he finds out that the whole thing was a message from a dead civilization. What intrigues me most about this episode is that the decades Picard lives are not hallucinations. When he awakens on the Enterprise he can still play the flute with the skills he acquired during his lifetime as Kamin. What new devilry is this?

Season 6, Episode 15, Stardate (this is one of only five episodes with no Stardate) “Tapestry”

“I can’t live out my days as that person! That man is bereft of passion… and IMAGINATION! That is not who I am!”

The return of Q, and the combination of The Next Generation with the fabulous Jimmy Stewart movie, It’s A Wonderful Life. During a near death experience Picard is given the chance to go back in time to alter a situation from his youth. The alternate timeline that develops is shocking, and brings to mind the classic song, “Man or Muppet.” Why is Picard the man he is, how did his youth shape him, what drives him, what defines him? He is given the chance to explore all of these things, and we get to watch.

To begin with, this episode contains some of the wittiest banter to ever grace the enterprise. The entire senior staff trying to get out of dinner with their talkative host, and everything to do with Picard and his saddle, of course. The Enterprise is docked for a cleansing Baryon Sweep. As the particles employed in such a sweep destroys all organic matter, the entire crew must vacate the ship. However upon learning that there are horses where they are docked, Picard returns to the ship for his saddle, unwittingly stumbling across a band of pirates who are taking advantage of the crew’s disembarkation. Picard is 100% the hero of this story, using subterfuge, raw talent and manual dexterity to thwart the bad guys and stay alive.

And if you have time…

Because who doesn’t want to see Q, Vash, and Picard go head to head, as the Sheriff of Nottingham, Maid Marian and Robin Hood.

In between episodes I heartily recommend a continual re-watching of the latest trailer; a brief glimpse of familiar faces will do wonders for the soul. 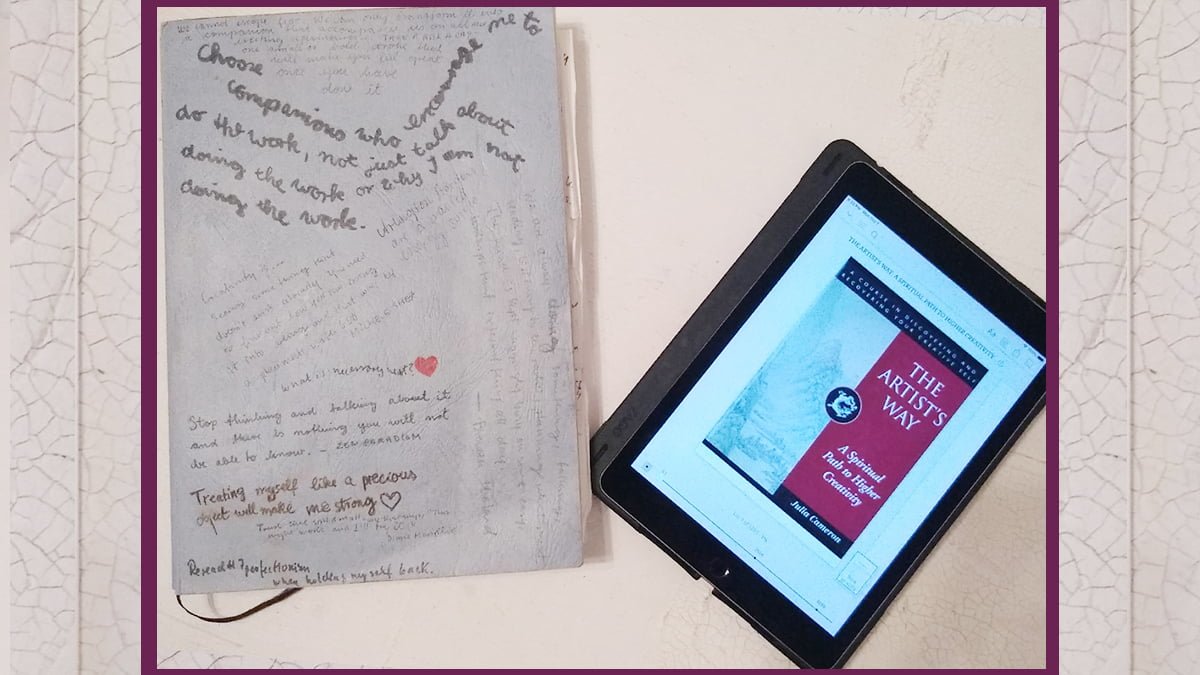 How to Tell Us Apart: A Public Service Announcement From the Empire