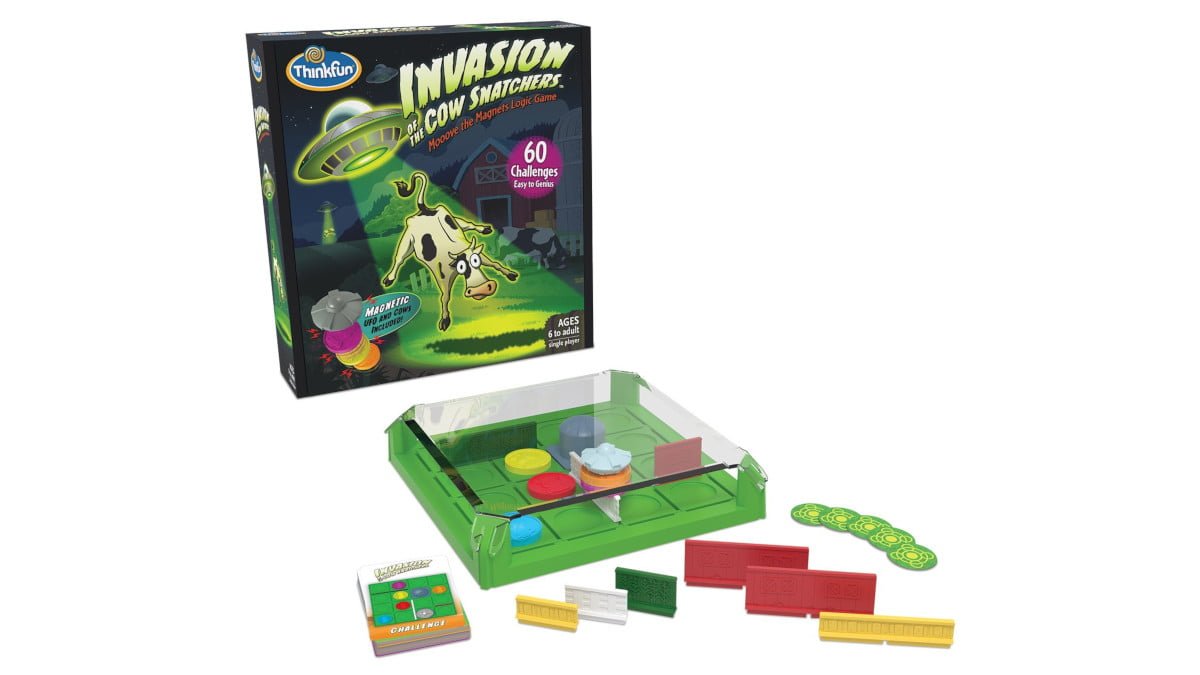 Another fantastic logic game from ThinkFun, Invasion of the Cow Snatchers: Mooove the Magnets Logic Game is a tongue-in-cheek look at the fast-moving world of… alien cow abduction. In logic game form. It puts you in control of a UFO as an alien on a mission to Earth to abduct some bovine creatures—some cows and a bull—but you must avoid all the farm obstacles along the way! Can you do it?

You act as the alien in a UFO flying around a farm, abducting a number of cows plus a bull, collecting them while avoiding obstacles like barns, crops, fences, hay bales, and a silo. Because the obstacles are different heights, the cows must generally be collected in a certain order (optional for the first four levels, but required for the Genius level), but it’s up to you to figure out how to go about doing that.

Designed for those ages 6 to adult, this logic game really does span the difficulty levels. While many logic games I’ve seen only include difficulty levels up to “hard,” this one has Easy, Medium, Hard, Super Hard, and Genius (where the rules change a bit). Even diehard logic game lovers will get something out of the higher levels.

The 60 challenges are divided up with 10 each in Easy, Medium, Hard, and Super Hard, and a generous 20 Genius level challenges. I was very pleased to see a higher ceiling to this logic game than I’ve found elsewhere.

What the Game Includes

The game comes with everything you need to play (including a few items to punch out of cardboard, yay!):

Setup and How to Play

Draw a card from the deck, either taking the next one in the stack or jumping around among the difficulties. (I recommend those new to logic puzzles start at the beginning and work your way through them sequentially, though.) Place the wall, silo, cow, and bull pieces (and crop circles, if applicable) on the board as shown on the card and replace the clear lid. Place the UFO on the lid in the location shown on the card (its bottom is soft to prevent scratching). It is from this height that you will abduct your cows.

Then, move your UFO around orthogonally to pick up all the cows on the board first and the bull last while avoiding going over the silo at any time. Each type of wall/barrier is a different height; you can move past barn walls with 0 cows in your tractor beam, crop rows with 1 cow, fences with 2 cows, and hay bales with 3 cows. Plan your moves accordingly. I recommend memorizing how many cows you can carry over each type of obstacle. Crop circles (Genius level only) are where you can conveniently drop cows off for later retrieval. When you have all the required cows and the bull in your tractor beam, slide off the edge and fly away with your cows. For the first four levels, each challenge might have multiple solutions. A possible solution is shown on the back in a clear graphic with color-coded arrows. For Genius level, the solution, also on the back, includes a sequential Left/Right/Up/Down/Pick Up/Drop Off kind of code. 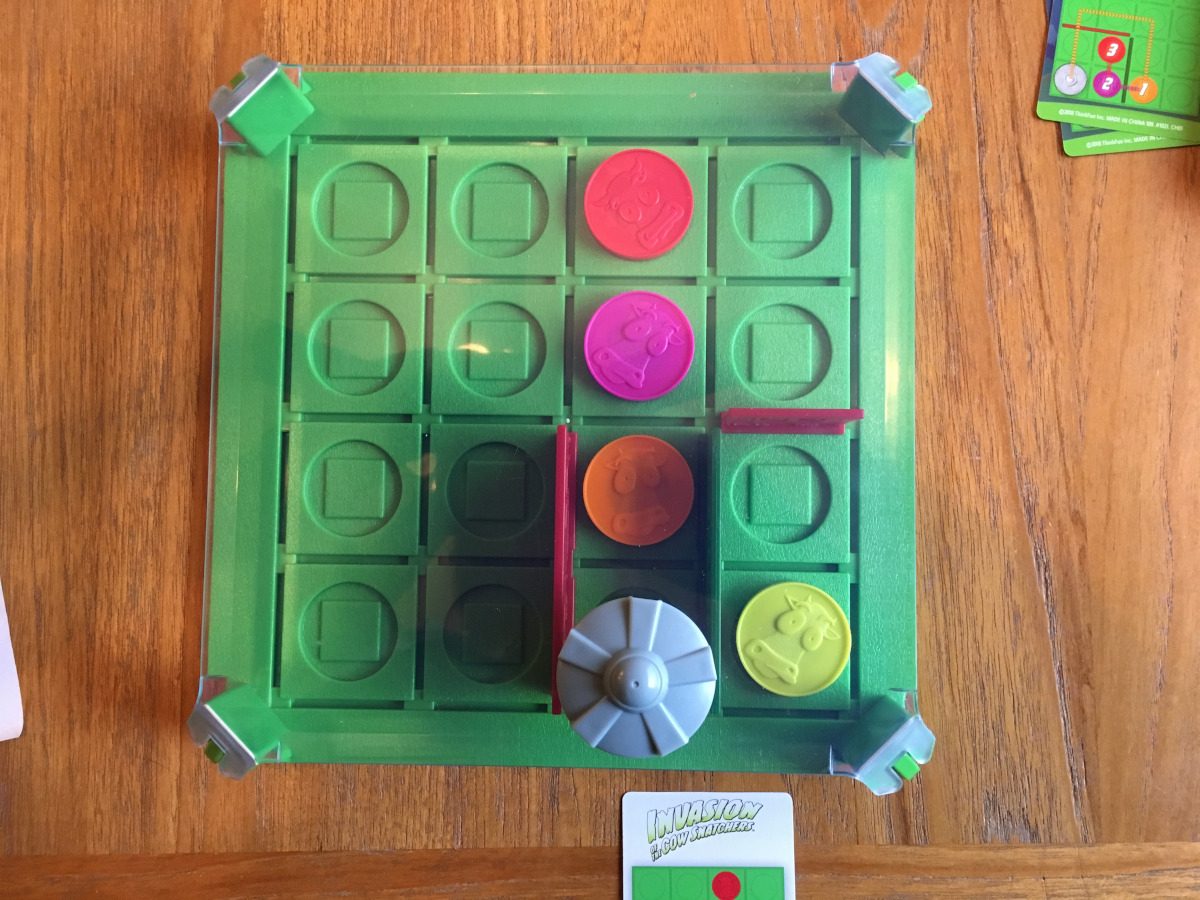 Solving each level works best when you can study the board for a while before you begin your abduction sequence, planning out your route. It’s a minor pain to reset the board, between having to remove the lid regularly and the fact that the magnets really like to stick together. Planning ahead gets more complicated the further along in the deck of cards you get, though, with the Genius level puzzles including a lot more backtracking. So, unless you’re good at holding many steps in your head at once (I’m not), those levels may require a bit of trial and error.

Here are the official instructions and an official video on how to play:

Invasion of the Cow Snatchers has a really fun and silly premise. While it looks like it’s for young kids, adults of all skill levels will also enjoy playing this game. If the early levels are too easy, jump ahead to another difficulty level. It’s great for parents and kids to play together, putting kids in the driver’s seat with the parents nudging them in the right direction if they get stuck (literally or figuratively). The fun theming of the game will get even reluctant kids involved, and, before they know it, they’ll be practicing strategy, logical reasoning, and critical thinking skills.

I have a couple of complaints about the game, but neither of them is a deal-breaker. First, it’s awkward to put everything back in the box. The plastic inserts that come with it are hard to position, but pieces fly around in the box without them. Including a bag for the pieces would have been nice; the bags they came in weren’t resealable. Second, the height of your UFO above the magnetic pieces while you play matters quite a bit. Too high and you can’t pick up the cow. Too low and you pick up adjacent cows. So any warp or bend of the plastic lid can affect this. Be sure to move slowly and carefully.

Invasion of the Cow Snatchers is available now. It pokes a bit of fun at the urban myth of cow abductions while challenging you to exercise your critical thinking and planning skills.

Epson XP-440 Is Small but Mighty for Crafters