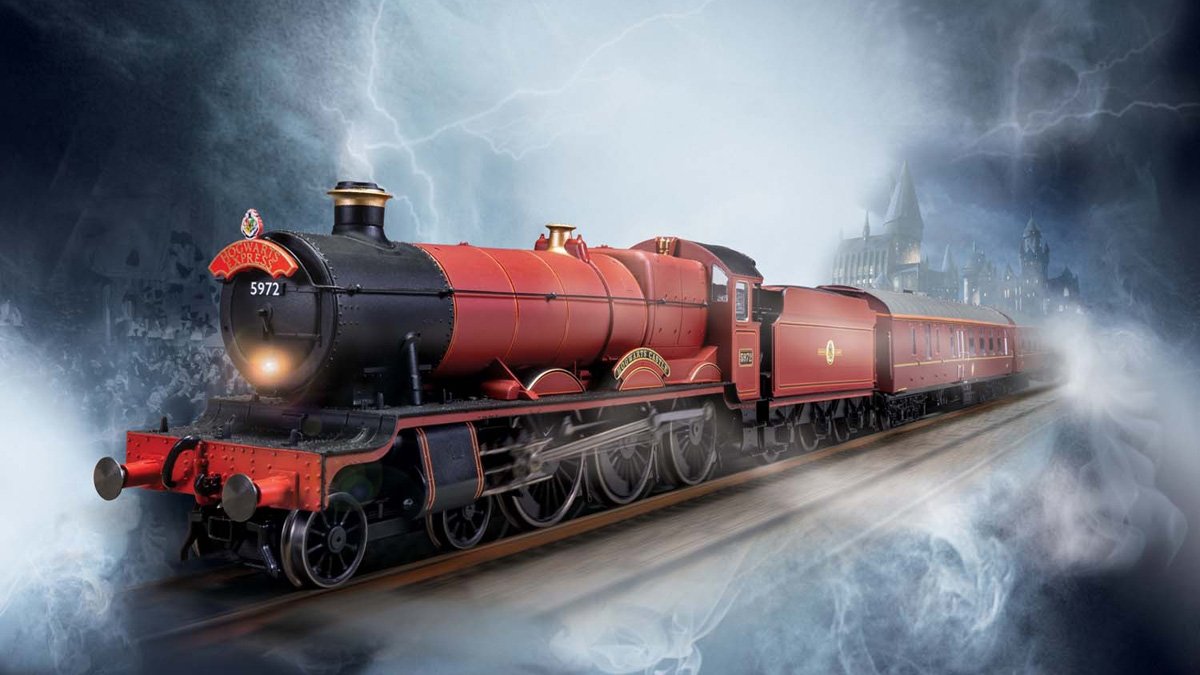 It’s September 1st which means that today, students from all over the UK will be heading to Kings Cross station in London to board the Hogwarts Express at Platform 9 ¾. However, if you’ve still not received your letter to board the real thing, Hornby has you covered with their newly released 00 gauge (1/76 scale) Hogwarts Express electric train set. Please note: This post contains affiliate links.

What Is the Hornby Hogwarts Express Electric Train Set?

The Hogwarts Express electric train set is a model railway starter set designed for older collectors and model railway enthusiasts. It is built to exacting specifications and is a perfect scale model of its real-world counterpart. Because it is a starter set, you’ll get a locomotive, carriages, tracks, and other accessories so you can set up a model railway of your own right out of the box.

In the box you get:

A 3rd Radius Oval is a standard Hornby designation. Simply put, this is enough track to build a full oval with a short siding, the whole thing measuring approximately 155cm long and 113cm wide.

How Easy Is It to Build?

In and of itself it’s very easy to build, however, if you’re only used to assembling basic wooden train tracks then this is a significant step forward. To connect the tracks together, you’ll need to precisely slot the rails into one another—not as easy as it sounds when they measure barely 2mm across at their widest point. Incorrectly connecting the track is the biggest cause of derailments and it’s easier than you might think to slot pieces together wrong—on building this set for the first time we found at least three connections that we only discovered weren’t together properly when we started running the train.

You’ll also need to think about your points (that’s the bit where a track splits in two for anyone not familiar with railway lingo) because the point status determines where the power is flowing and having them set the wrong way can mean your locomotive won’t move. This is an electric set which runs off mains power and the included power track piece is how that electricity is transferred into your railway. The power track piece is also very simple to put together: a two-pronged metal connector attached by wires to the train controller slots into the box on the side of the power track, then the train controller is plugged into your wall socket like any other electrical device. The way you plug in that two-pronged metal connector will determine which direction is forward and which is reverse for the locomotive, however, if you find they’re back to front, it’s very simple to flip it around and re-orientate your loco.

One thing you don’t need to worry about is circuits. The set will work with only a few pieces of track in a straight line, so you don’t need to worry about ensuring you have a completed ring of track for it to work. This means the track is enormously flexible in terms of layout, allowing you to build the railway of your dreams—assuming you have space!

How Well Does It Run?

When it is put together correctly, beautifully. We found a few problems with the power not transferring properly but eventually figured out that it was down to us not fully understanding how the points worked rather than any issue with the set itself. Once we had that figured out and knew to avoid stopping in the small dead zone around a point, we had no further problems. There is also an active community on Hornby’s forums so if you do run into any problems, there’s bound to be someone there who can advise.

It is worth noting that this is a set aimed at older enthusiasts, not young children. The train will derail very easily if driven too fast or if touched (we found it ran best at around 50% power) so you’ll need to operate it around kids old enough to understand that they need to be careful and controlled in order to play with it. My almost ten-year-old initially struggled because his instinct was to race the train around the track as fast as possible rather than at the lifelike gentle speeds needed to keep it running smoothly. However, he quickly picked up on how it needed to be operated so if I was to place a recommended age on this, I’d probably advise that it is best used by kids aged ten and up.

Finally, a word about maintenance. Unlike your standard kid’s railway set, you will need to do a little work maintaining a set like this in order to keep it looking its best and running smoothly. The set comes with simple yet detailed maintenance instructions that will help you with this, but you will need to lubricate the locomotive approximately every six months (or 100 hours of running for less frequently used sets) and keep the track and wheels clean because a black deposit will gradually accumulate on the surface which, if allowed to remain, will affect the train’s running ability.

What Other Accessories Are Available?

A full range of Harry Potter items is coming from Hornby, so you’ll soon be able to build a fully themed railway setup based around Hogsmeade station. The buildings currently available for pre-order include:

Platform 9 ¾ is now available as well and you can also pre-order additional carriages as well as a Hogwarts Castle locomotive with sound effects (the locomotive included in the set does not have sound effects).

Should I Buy a Hornby Hogwarts Express Electric Train Set?

The Hogwarts Express electric train set is a stunning set built to the level of quality you would expect from Hornby, who is the UK’s best-known model railway brand. Watching the locomotive go by close up, you’d be hard pushed to tell it apart from a real engine, the detail is so perfect. As a lifelong train enthusiast (and a big Potterhead as well) I could spend hours simply watching this loco go around in a circle—the therapeutic value of which is something fellow model railway fan GeekDad Dave has discussed here before—but I am hoping that someone will build a full Potter-themed layout using the items from this new Hornby range so I can go and see it at a show because, for some unfathomable reason, my husband isn’t enthused about me converting our entire garage into one giant model railway room…

There is a significant learning curve up to running the Hogwarts Express electric train set when moving up from a plastic or wooden kids motorized train set but that is absolutely reflected in the quality. Hornby’s 00 gauge is the standard for British model railway enthusiasts and a well-maintained set will last a lifetime. That steep upward curve is reflected in the price as well because, at around $200, this is not a pocket money train set, and with buildings costing anywhere from £20 to £60 each, building a full layout is a big investment. You’ll also need a whole lot of space. The track has to lie perfectly flat to avoid derailments and we had to run our set on the floor because even this basic starter set oval couldn’t fit onto my dining room table.

As is probably already obvious, this is a kit very much aimed toward adults and collectors, not kids. If you’re looking for a train set for your Harry Potter obsessed eight-year-old, this may not be the set for you, as it will require maintenance to keep it running well and a gentle touch to operate—it simply will not handle rough play. For youngsters wanting to play at Hogwarts Express, I’d be more inclined to direct you toward a wooden set from Brio or Bigjigs as these will handle far more enthusiastic play and with some creativity, can still be a lot of fun even for older kids. Brio’s 33592 Mighty Red Locomotive will make an excellent Hogwarts Express substitute and could probably be altered in that direction even more with careful use of a Sharpie.

Our family has had a huge amount of fun with the Hogwarts Express electric train set. My nine-year-old son spent hours sending it around the legs of our dinner table, his Potter-loving friend’s jaw dropped open when she saw it while visiting for an afternoon, and my father-in-law instantly became a kid again when he came over—we ended up leaving him and my son alone as they played happily together, coupling and uncoupling the carriages. I’m already trying to figure out if I can have the set running around our tree come Christmas morning and, on opening the box, instantly had delusions of grandeur involving a full attic conversion into the model railway room my dad always dreamed of.

For Potterhead households with older kids, the Hogwarts Express electric train set will make for an amazing gift and will bring joy for years if not decades to come. However, I would hold off on purchasing it for families with young children as little fingers getting too close may well lead to disaster. 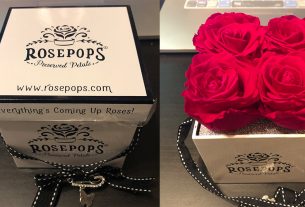 RosePops: Spreading Love One Rose At A Time