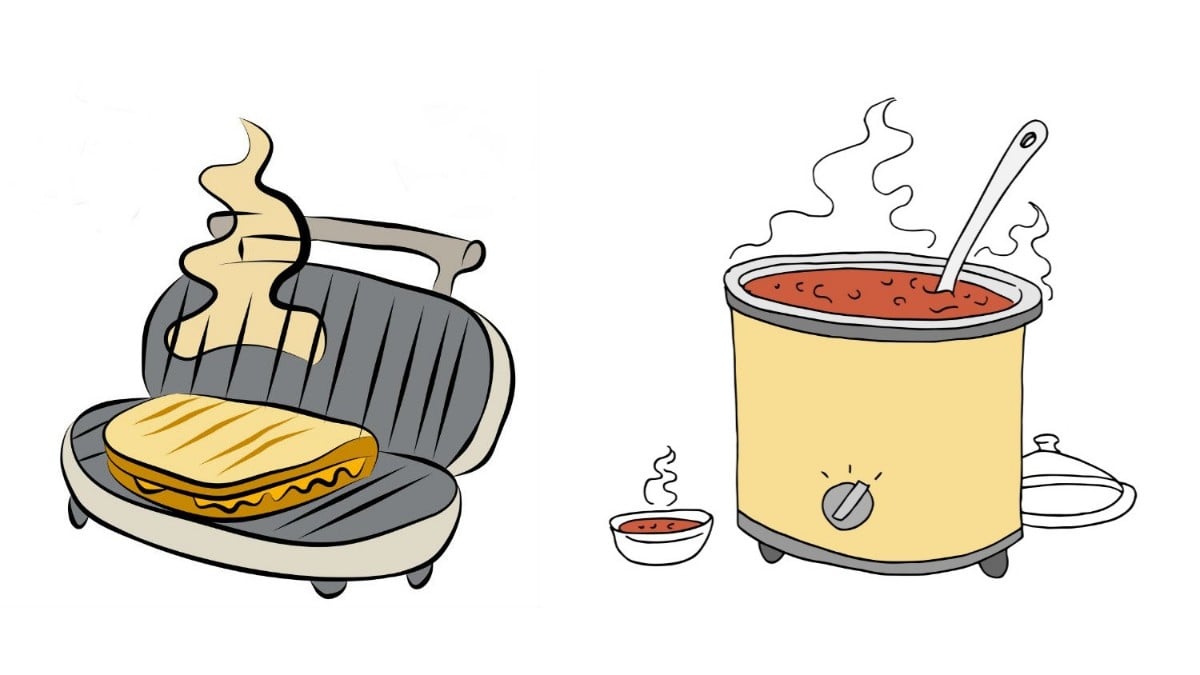 My family has been roaming around cons of all sizes from the time the youngest was small enough to ride in a backpack. It’s been super-fun, but as the boys got older, it (unsurprisingly) got more and more expensive.

One of our more successful ways to keep costs down has turned out to be hotel room cooking.

At first, it felt like a necessary evil: we’d economize on food so we could spend on the room. (Plus, in the pre-UberEats days, trying to find food on a holiday-weekend-Sunday-night in downtown Atlanta for Dragon Con led to a few dinners from the refrigerator section at the CVS. I really don’t recommend this option.) Once we got into it, though, our hotel cooking meant there was always a place to get food without waiting in line. The kids (some of whom are pickier than others) knew they’d find something they liked, and it made for an easy gathering point for friends. Much to our surprise, our plan of hacking together food in the room turned into a pretty decent part of the weekend in its own right.

Disclaimer #1 – Please, PLEASE, if you’re at all interested in hotel cooking, please pay attention to proper food storage and safety procedures. Some links for you:

Planning It Out: Hotel Cooking

Sometimes, the room comes with a microwave or even a mini-kitchen, and cooking is pretty straightforward. Other times, we’ll be lucky to have a coffee maker in the room, which really requires some creativity. I’ve dragged all kinds of small appliances around over the years, but my secret weapons have turned out to be a panini press and a slow cooker. (Recently, I upgraded to an Instant Pot®, but you’d be surprised what you can manage with just a plain old Crock-Pot®.)

Disclaimer #2 – It’s here that I am honor-bound to point out an inevitable problem: geeks tend to lean hard into whatever they’re geeking about, and I’ll admit I went a little overboard with the food for a year or two. (Filling, frosting and decorating homemade cupcakes on a hotel desk was a bit much, for sure, even if they were delicious and festive, tyvm.) The slow cooker and panini press are good in that they help keep things simple, but not blah. Not-blah is a big plus in making this cooking-in-the-room option a feature, not a drag.

To see what the other Geek Moms are up to at cons, check out our Conventions tag.

Sandwiches are, of course, one of the simplest things you can do to feed your mob cheaply. They do get kind of boring, though. The panini press wins for doing double-duty as a toaster (which is great for bagels and English muffins for breakfast), as well as making it easy to turn a quick, slap-it-together sandwich into something that feels a lot less, well, slapdash. Even a basic PB&J gets an upgrade, but the press does wonders for ham or turkey sandwiches (pack pickles and fancy mustards/spreads, according to your family’s taste and really go wild.)  (I’m keeping myself from linking to the cheese combination that goes into the grilled cheese sandwich from the movie Chef by exercise of massive willpower, because I just talked about going overboard and having to dial it back. It’s out there, though.) 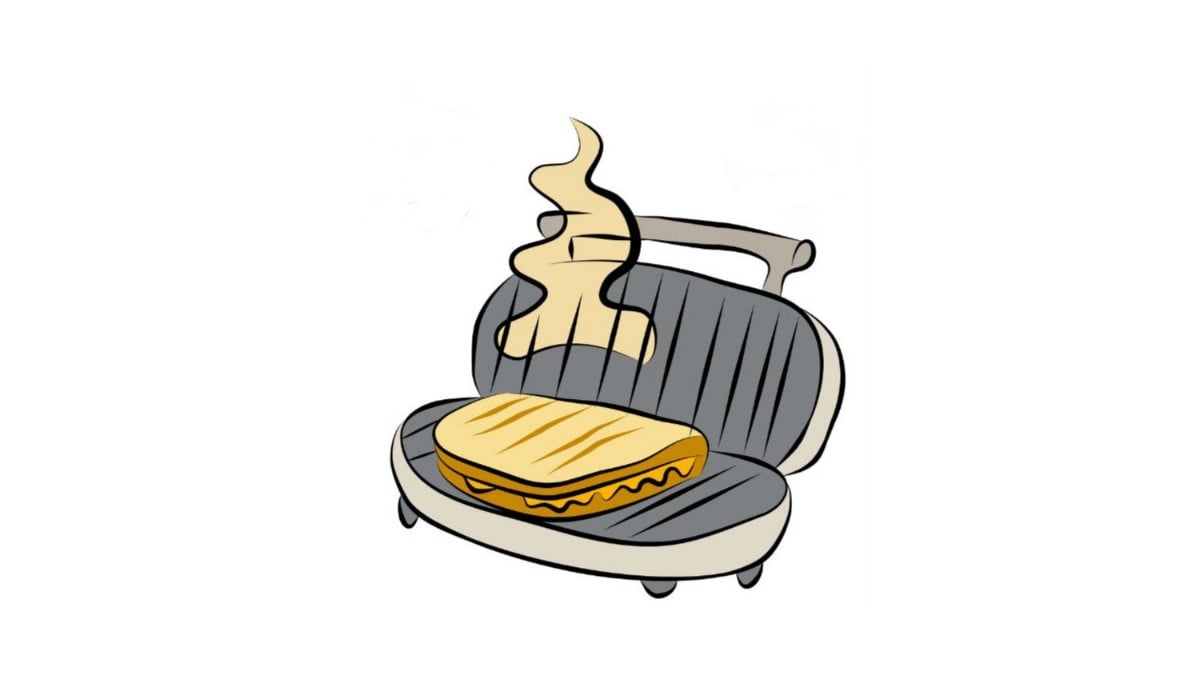 A press also does a pretty excellent job on quesadillas. Depending on how much effort you want to expend, you can grill veggies first and then layer them with cheese, or just do cheese and have salsas and sour cream and guac on the side.

Its’ greatest triumph might be how it turns leftover pizza into a fun second meal. (Take two slices of cold pizza and put them on top of each other, cheese to cheese/crust sides out. Heat in the press until warm and gooey and then cut into strips to share. Voila: pizza sandwiches. I know you’re all saying that ‘no, really, cold pizza is fine,’ and it is, but it does get old after a few meals.)

Some of my greatest hotel cooking successes have come from the humble slow cooker: chili, tacos, soups, stews, even breakfast casseroles. I know someone who makes pot roast every year, complete with veggies and a packet of rolls they drop inside the cooker for the last 30 minutes or so. Google overfloweth with recipes, but to keep things simple at first, make your favorite chili recipe at home, double-bag it in zip-top bags, and then transfer from a cooler to the slow cooker on Low as you’re going out to get your con-geek on in the morning.

If you set up all the utensils and point out toppings like cheese and sour cream in the cooler, anyone can serve themselves when they find themselves back in the room.

A slightly more-involved process would be to pre-brown the protein portion at home and bring along your liquid base (tomatoes/broth/whatever you use for your most-excellent chili recipe; I’m not looking to start a chili war here). The necessary spices can travel in a Ziploc or a small plastic container. (4-ounce canning jars work well, too, if you’re avoiding plastic.) This has slightly less of an eating-leftovers feel to me, but YMMV. In either case, I recommend the tried-and-true tailgate trick of using small bags of Fritos as your bowls. 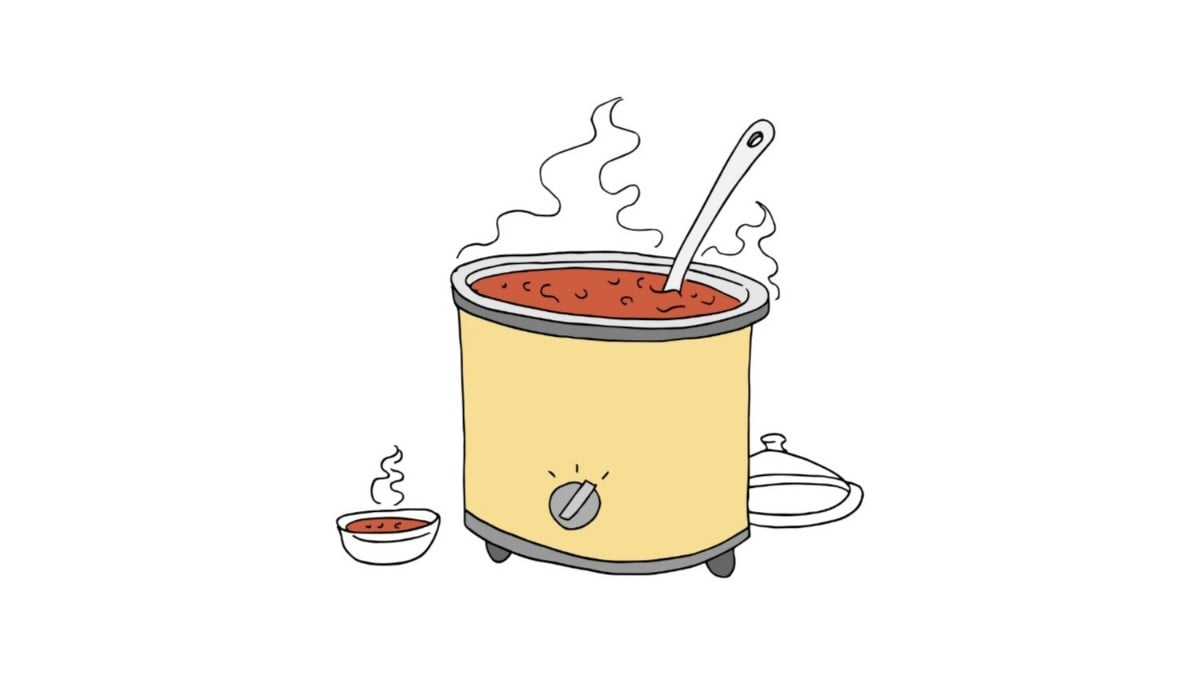 Another super-simple slow cooker meal is a baked potato bar: scrub your potatoes, rub them with olive oil and salt, and then wrap them in foil. Pile them in the slow cooker and cook them for 4-5 hours on High or 8-10 hours on Low. Pack as many toppings as you can think of (butter, sour cream, cheese, bacon, broccoli and cheese, more of the chili, etc, etc, etc) and then everyone can make their own creation. (Poke them before you start serving because it’s just so sad when you’re trying to eat a not-quite-cooked through potato. There could be tears.) (Don’t ask me how I know.)

And for breakfast, I offer the basic egg sandwich on an English muffin. This is a do-ahead menu item, but it works well for breakfast after your first overnight. Basically, I just add scrambled eggs, cooked sausage/bacon, and cheese to a toasted English muffin, wrap it all up in parchment paper (this helps keep things from getting soggy in the reheat) and then foil, and freeze. I put a big bag of them in the cooler as I walk out the door to head down to the con, and then pile them in the slow cooker just before bed.  They re-warm in 6-8 hours on low.

Some things that we’ve worked out and streamlined over the years:

Of course, none of this is limited to cons–people can and do cook in hotel rooms all the time.

Even if you haven’t thought about it, cons are generally a good place to try this out. It’s for a short, contained period of time (so it’s not a huge amount of work) and the food situation at a big con is often overwhelmed by the influx of attendees (so it’s not like you’re missing out on a great restaurant experience.)

Plus, having food in the room means any members of your family who might have issues dealing with the crowds have a break built into their schedule. Sometimes, that makes the difference between having a fun time and being miserable, and that’s worth a lot in my book. 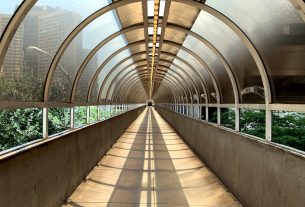 Batman Back to School Craft

4 thoughts on “Feeding Your Family On The Cheap At A Con: Hotel Cooking”