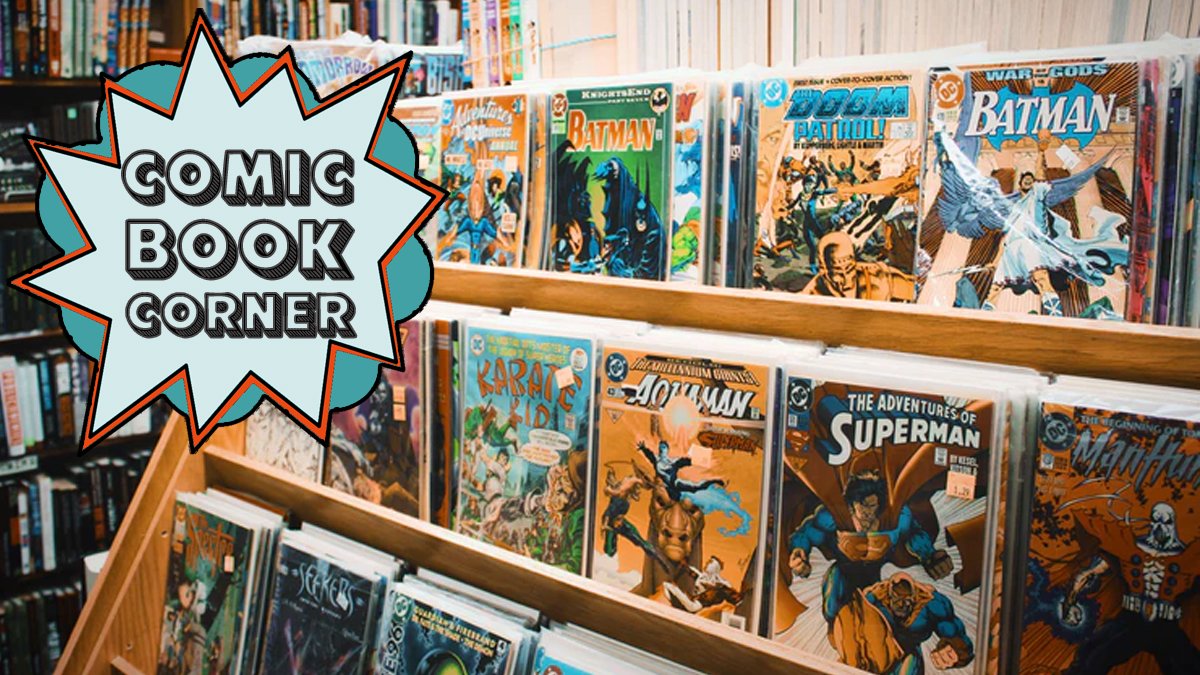 Heroes, Gods, and Legends are the order of the day this week as Comic Book Corner reviews several new series and revisits a few ongoing ones.

Eric Parrish reviews History of the Marvel Universe #1, a tale of cosmic heroes and Marvel Lore. MAJK checks out the insanity of heroes without a clue in Pretty Violent #1, released today by Image.

Kieron Gillen’s Once and Future #1 makes MAJK’s pull lis,  as she expected, and of course, Xena: Warrior Princess #5 rounds out Comic Book Corner for this week.

History of the Marvel Universe #1

Mark Waid is well-known for his encyclopedic knowledge of comics history. That knowledge is on full display in the new History of the Marvel Universe limited series, the first issue of which was released recently. I picked up this book on a whim and was pleasantly surprised by how much I enjoyed reading what is basically a reference comic.

The initial concept of this centers around the end of time: Franklin Richards, the nigh-immortal progeny of two of the Fantastic Four, is one of the last living beings along with Galactus. As universal entropy sets in, Richards asks Galactus to recount the history of everything so that they can apply some meaning to what is coming to an end.

What follows is Galactus’ narration of several billion years’ worth of history, condensed into about 20 pages. Galactus’s story begins with the origin of the universe, the coalescence of several cosmic beings, and the creation of the Infinity Stones, then journeys through the development of more cosmic and alien life with the Celestials, Eternals, Kree and Skrulls, and the pantheon of Norse gods, before condensing focus to the genesis and expansion of life on and near Earth. Galactus swiftly summarizes the stories of bygone characters who would eventually lead to many of the familiar Marvel figures of today’s mythology, including Agamotto (the first Sorcerer Supreme), Ulysses Bloodstone, and early mutants like Apocalypse and Mr. Sinister. After proceeding through billions of years of history, the first issue concludes with the emergence of the man who would become Wolverine.

I have never been very interested in stories with a more cosmic focus; most of the Marvel stories I’ve consumed over the years have been more “street-level” heroes like Spider-Man and Daredevil, with a healthy helping of X-Men thrown in. But I thoroughly enjoyed this history; it was a good primer to learn about many characters and stories who I had encountered briefly before but of whom I’d only had an incidental knowledge. The artwork of Rodriguez and Lopez was the perfect accompaniment to the heavy historical material – the several double-page spreads showcased the major historical notes and helped pace the tale well so that billions of years of history could be captured in a relatively small space. I have a feeling that further issues will slow down a bit, as we get into more current Marvel lore and begin to encounter heroes like Captain America, Namor, and the Human Torch.

This is a dense read – Waid, Rodriguez, and Lopez pack a lot into this issue, so I recommend taking time to digest it thoroughly (don’t skip the several pages of annotations at the end, either – although adding weight to an already heavy book, I found them to be valuable supplements). If consumed slowly and with intent, this first issue of the History of the Marvel Universe proves to be a rewarding read.

Conclusion: This book is light on flashy action and drama, instead of focusing on history and lore. It’s a fascinating read nonetheless – recommended!

Heroes have a long history of screwing up; especially new heroes, or in this case, “Wannabe Heroes.” Gamma Rae is determined to be a hero, because, after all, if you’ve been strong since you were a baby that’s what you do right?

Super cute and super strong, this little pink-haired hero dives right in when she sees a young boy in danger. Unfortunately, she misreads the initial situation and the domino effect of her screw up becomes an epic level comedy of errors. Heroes, villians, and the fickle favor of bystanders swap sides faster than a tennis ball at the Wimbleton. Still, Gamma Rae is determined to do good even if she does it badly.

The best heroes have an interesting origin story, and if the last few pasts of this first issue are any indication then sweet little Gamma Rae is on the right path… or depending on your point of view the wrong path. I’m pretty sure that’s the way her parents see it. I mean even Kamala Khan’s parents have concerns about the strain heroes face day-to-day and for Gamma Rae, it seems that strain might be a bit bigger.

Fans of I Hate Fairyland will have a great time with this new series and should put this on their pull list now! This first issue has already gone to a third printing. Hunter and Young’s write a fast-paced tale with solid comedic stylings that will have you laughing at the sheer absurdity and rooting for Gamma Rae from the first page.

Hunter’s art style is somewhere between the art stylings of Skottie Young and SpongeBob. It’s lighthearted and cartoony yet the action scenes flow well. This is NOT for kids under the age of 15. There are a lot of absurdly cartoony blood and guts which works perfectly for this story and will delight those with a wicked sense of humor.

Conclusion: Don’t be confused by the cartoony style, this is a warped superhero tale that the may not play well with very young readers. If, however, you enjoy a bit of slightly twisted humor and enjoy absurdity, silliness, and satire then this is the comic for you.

In Xena Warrior Princess #4, Dischord discovered that she has friends. More in exchange for saving her, Baba Yaga transported our trio as close to home as she could. While Xena, Gabby, and Dischord still have miles to go at least the weather is a bit warmer.

Writer Vita Ayala takes a new twist on one of the oldest legends and spins a masterful tale in which the ever petulant Dischord tries her hand at being a hero. She’s stranded in the local tavern waiting for Xena and Gabby to return from hunting a beast that terrifies local villagers and slaughters them like cattle. While pouting over her breakfast, Dischord hears a couple of locals discussing the recent discovered of yet another dead body. This one the body of a foreign warrior. That’s enough to set the Goddess of Chaos and Conflict out on a tear. When one doesn’t have many friends, you protect them.

Dischord’s temper leads her right to the very beasts that the villagers fear, and she does what any self-respecting de-powered god would do. She runs. Straight to a creepy haunted looking castle. Dischord manages to find Xena and Gabby but something is terribly wrong.

Ayala crafts an incredible counterpoint to the beautiful tale of kindness we last read. Deftly, they weave a hero’s story for Dischord, blending the Danse Macabre of horror’s oldest fiend to create a captivating issue. Will Dischord jump at the chance to once more become a powerful force that humans fear or are the nascent bonds of friendship enough to turn a spoiled goddess into a snarky hero?

Vasil Georgiev takes over the art on this one. I’m not really a fan of the more angular character designs but the art is still quality and all the hallmarks of this fan favorite trio remain intact. Colorist Rebecca Nalty continues to do her magic that brings the characters leaping to life and give depth to the environment. Nalty flexes her shading muscles with Dischord’s wander through the eerie torchlit castle and I remain impressed with her work. I just wish they’d settle on an artist for this run.

Conclusion: The strength of Ayala ‘swriting and Nalty’s colorwork coupled with David Mack’s cover art keeps this series on my pull list.

The Return Of The King?

Elderly Matron Bridgette McGuire has a reputation among the staff of her retirement home for being a bit different. Duncan, her grandson, describes her as “Aggressively independent” and “hard as nails” but not even he suspects the truth about her past.

When a group of Nationalists murder archaeologist Alan James to get their hands on a 6th-century artifact, only Bridgette realizes the danger that this particular artifact poses. So she escapes her retirement home and calls Duncan from the middle of a dark forest. While he thinks she is crazy, she does rescue Duncan from a date that’s on it’s way to becoming quite a disaster.

Duncan finds Bridgette digging away in a gloomy clearing and it’s there that he learns the truth about the woman who raised him. When you are a museum curator, discovering your sweet little grandmother is an ex monster hunter with a stash of weapons worthy of the Punisher is a bit of a shock. It gets easier to accept after you’ve faced down a nasty supernatural horror.

With a minor bullet wound and a creeping sense of dread, Duncan joins Bridgette on a journey into a world of magic and mysticism where prophecies can mean more than one thing and zealous Nationalists work to resurrect an Arthurian legend.

Writer Keiron Gillen crafts yet another gripping tale, blending myth and legend with the contemporary world, to thrill readers, as he has with previous works such as Die, and The Wicked +The Divine. Introducing us to the most unconventional female hero in a long time and her grandson, Gillen offers us a tale that evokes memories of the first Indiana Jones movie. Once and Future went right to my pull list when I saw that Gillen’s writing was paired with the art of Dan Mora.

Conclusion: Gillen and Mora hit a beautiful home run with this issue. If this is any indication of the rest of the series then I highly recommend it to any comic fan 12 years of age or older. I am all in for this series. 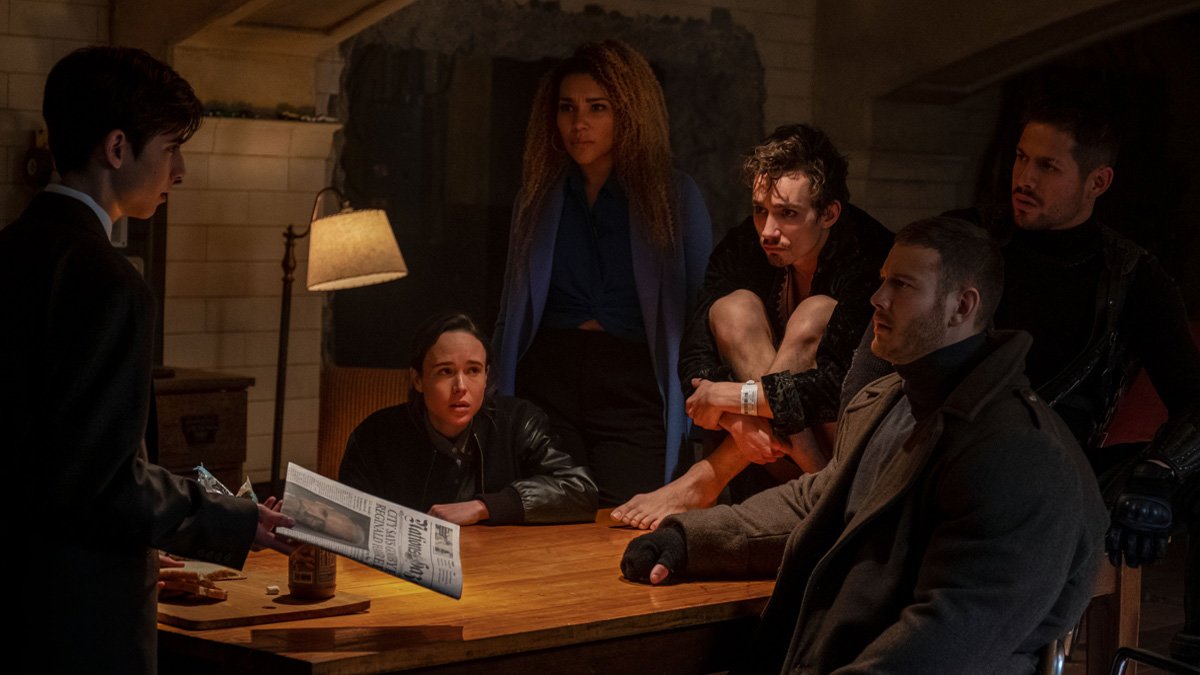 ‘The Umbrella Academy’ Is a Worthy Addition to the Superhero Genre 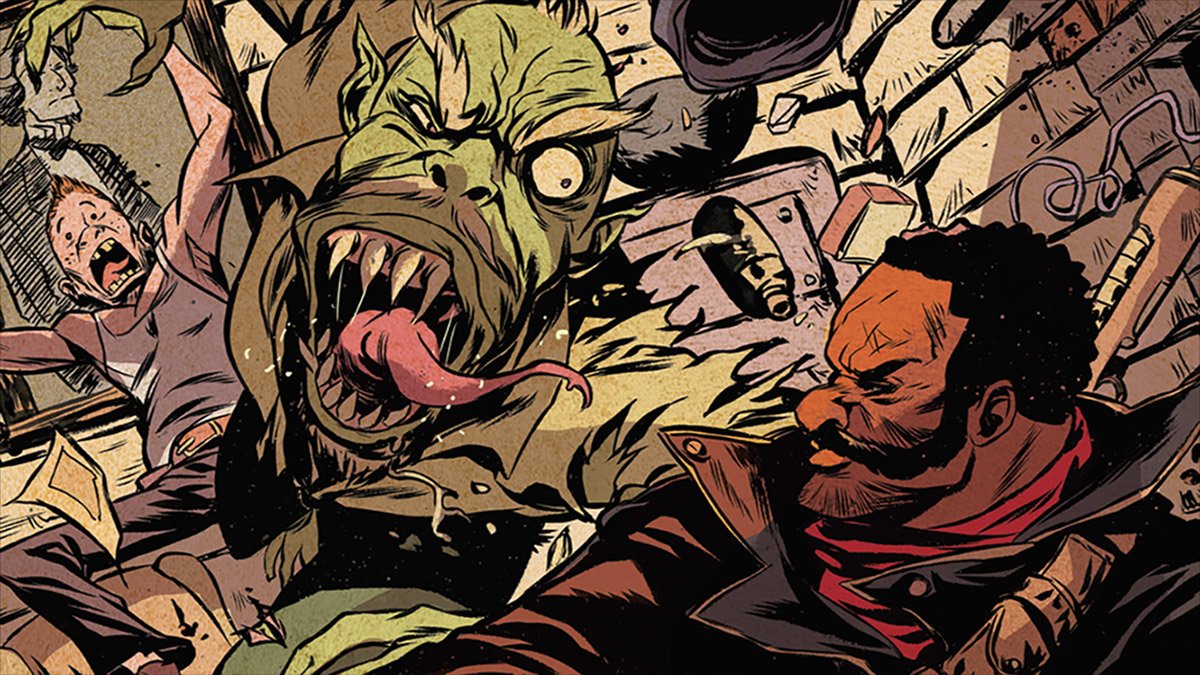 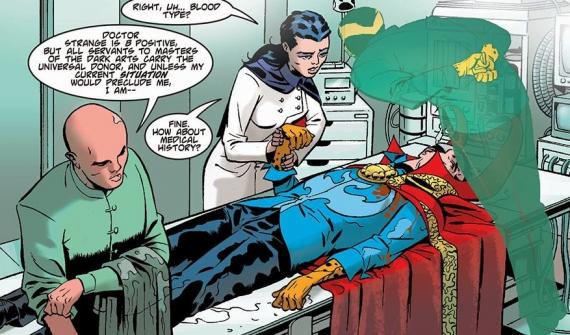