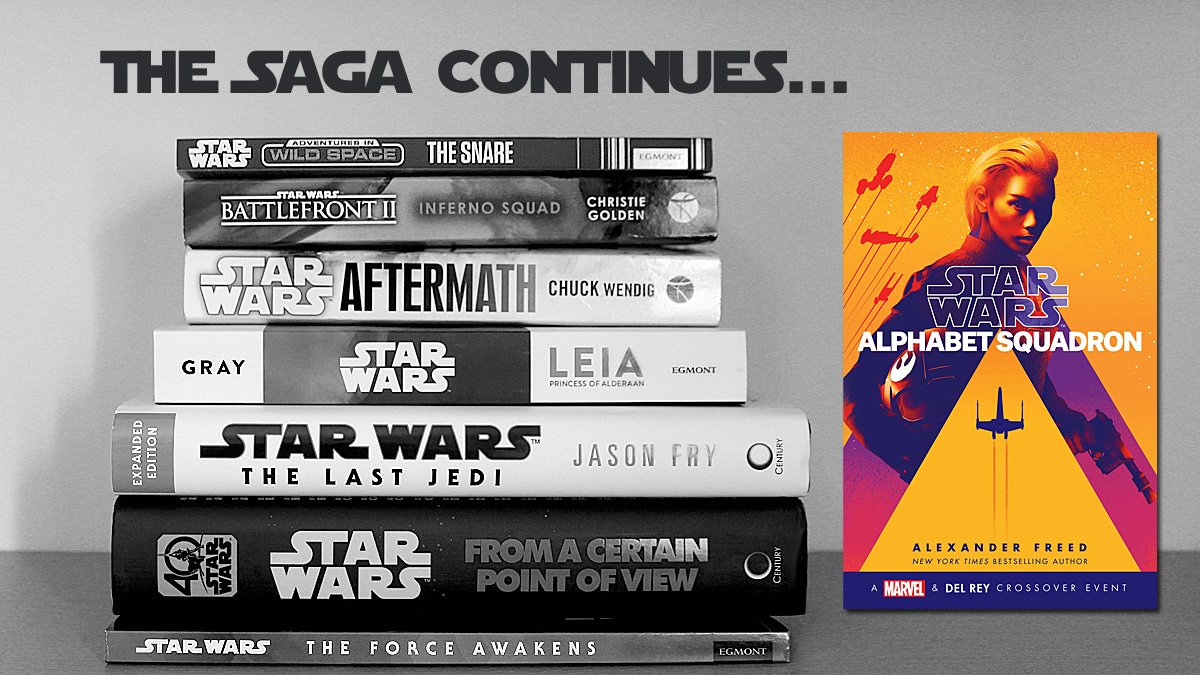 Alphabet Squadron follows five New Republic pilots as they attempt to come together as an intelligence working group and take down Shadow Wing, a squadron of ruthless Imperial holdouts.

Written by Alexander Freed who previously wrote Star Wars Battlefront: Twilight Company—another novel following a small squadron of rebel fighters—Alphabet Squadron (I think it would have been cool if it was called Aurebesh Squadron instead) is the first of what will become a trilogy featuring this all-new cast of characters. I’ll be honest, it took me time to get into this one. Alphabet Squadron is no light, summer read. It’s a dense tome filled with detail and emotion that demands you give it your full attention and invest your time with it, but once you’ve connected, it really pays off.

To understand Alphabet Squadron, you need to meet the crew. The leader of this story is Yrica Quell. Quell is an Imperial defector who left Shadow Wing after being horrified by her orders during Operation Cinder—or that’s what she wants you to believe. We meet her living in Traitor’s Remorse, a shantytown forged from the remains of an old rebel base and now, several months after the Battle of Endor, housing thousands of Imperial defectors. Quell is desperate to prove herself and get back to flying, this time for the New Republic, which is why she agrees to take on the mission of bringing down her old squadron. Shadow Wing is a group of TIE pilots notorious for leaving a trail of unimaginable destruction behind them, and their remorseless flying style responsible for the deaths of countless rebel and New Republic fighters.

The rest of the Alphabet Squadron are Wyl Lark, Chass na Chadic, Nath Tensent, and Kairos.

Wyl and Chass flew together before Alphabet as members of Riot and Hound Squadrons and are the sole surviving members of those squadrons after they took on Shadow Wing deep inside the difficult Oridol Cluster, leaving them with significant survivor’s guilt. Wyl—young, homesick, and a veteran of Endor—just wants to go home, but loyalty and a sense of duty are keeping him attached to the New Republic and his new family of fellow pilots. Chass feels adrift after watching so many of her heroes die and has begun to wonder if the only way to accomplish something meaningful with her life is to die herself, once she’s selected the perfect song to play in her B-wing from her vast array of music data chips of course. She feels that others keep stealing her choices and her chances away from her, and she is struggling to reign in her anger at the universe.

Nath, like Yrica, is an Imperial defector but one who left many years earlier, just before the destruction of Alderaan along with his entire TIE squadron who were under investigation for corruption by the Empire. Like Wyl and Chass, he is also the sole surviving member of his squadron after they were all but obliterated by Shadow Wing six months before Endor. He is unabashedly untrustworthy and keeps his secrets close, but who in Alphabet Squadron doesn’t?

Finally, there’s Kairos. Kairos is an enigma. Almost entirely silent and permanently wrapped in layers and a mask that conceals her face, pretty much all we know is that she, like the others, has her own challenges. What the rest of Alphabet Squadron do know for sure is that, when necessary, she can employ truly terrifying levels of violence in the name of the New Republic.

Each of the pilots of Alphabet Squadron flies a different type of ship—Yrica a stolen X-Wing, Wyl an A-Wing, Chass a B-Wing, Nath a Y-Wing, and Kairos a U-Wing—which is how the group comes by its name. There are technical issues here. Mixed unit fighter squadrons haven’t really been seen in Star Wars before and there are good reasons for that. They struggle to work because the ships are built for different environments and tactics. Rather than ignoring this, Freed uses the mixed bag nature of Alphabet Squadron to the story’s advantage. The different types of ships increase tensions between an already fraught group of pilots and forces them to work even harder to make their plans work, taking one another’s strengths and weaknesses into consideration. It’s a difficult ask for an experienced group with a history of working together. For the newly thrown together pilots of Alphabet Squadron, it’s almost impossible.

With so many different ships and a group of pilots each nursing their own trauma and mental health issues—Yrica is undergoing therapy at the “hands” of a reprogrammed Imperial torture droid—working together is always going to be difficult. The group struggles to find cohesion as Yrica realizes that Imperial tactics don’t work with rebel pilots, trust and loyalty issues raise their heads, and the group encounters setbacks that ground them aboard General Syndulla’s battlecruiser. They are frustrated and tense, forced to work in intelligence despite having no experience as spies, placed there only because their group leader, Caern Adan, believes their shared experiences at the hands of Shadow Wing gives them unique insights that will bring down the opposition. In order to succeed, they need to learn to work together.

Alphabet Squadron is divided into three parts, and I’ll admit that I found “Part One: Elements of a Killing Machine” hard to get through. There’s a LOT of characters being introduced here—not only the members of Alphabet Squadron itself but their previous squadrons too, plus characters on the Imperial side, engineers, droids, and more. At times, it felt like information overload with just too many people and events occurring simultaneously for me to keep track of, although I will take this moment to say that they new droid characters in Alphabet Squadron are some of my favorites since Mr. Bones in the Aftermath trilogy. It’s worth pushing through though because, by the beginning of “Part Two: Maladies of an Endless War,” it had settled down and given me a group of characters who I was beginning to care for and the story was tightening up into something I struggled to put down. By the time I hit “Part Three: Stages of a Rapidly Decaying Plan,” I was staying up into the small hours of the morning to push through to the end.

On the downside, I felt that Hera Syndulla’s role has been a little over-exaggerated in the promotion for Alphabet Squadron. A quote from her is on that back of the book and she is prominently mentioned in the Amazon blurb, so I was looking forward to her turning up, which is why I was a little disappointed to be well over 150-page mark before she made an appearance. The comic snippet in the center pages was a little confusing too. Clearly, it is designed to stoke interest in the TIE Fighter comic miniseries from Jody Houser that ties into this trilogy, but sticking eight pages from a totally different story set years before this book into the middle of the story felt weird and distracting.

Back to positives: I loved the subtle diversity weaved into the characters and the portrayal of mental health among veterans and military crew. Nobody goes through events like the Battle of Endor or Operation Cinder and comes out unscathed, no matter what side you’re on, and Alphabet Squadron doesn’t shy away from showing the scars that years of endless war have caused on all these characters, both visible and not. The tag line for Alphabet Squadron on social media has been “Victory Has a Price,” and that is clear all the way through its pages.

The official Star Wars Books Twitter account ran a Star Wars books personality quiz back at Star Wars Celebration in April and one of the questions it asked was, “Are you here for the Stars or the Wars?” I’m very much here for the Stars, so the more military-focused Star Wars novels are rarely top of my I’m-Excited-to-Read-This-List, which is why I’m so pleased that I ended up enjoying Alphabet Squadron as much as I did, especially when I found the first part so tough to get through. I’m already excited to see what’s next for this group of pilots. I imagine the next two books will be very different now that the group is already together and working (at least somewhat) as a team, so I’m keen to see what challenges are lying in store for them. Personally, I’m hoping to learn more about Kairos who remains the most mysterious of the bunch, watch if Nath’s actions catch up with him, and (hopefully) see Wyl finally return home.

Alphabet Squadron is a challenging read that will reward you for staying with it and I can’t wait for more from the trilogy.

GeekMom received a copy of Alphabet Squadron for review purposes.

They’re Back! Exclusive Preview of Tiny Titans: Return to the Treehouse 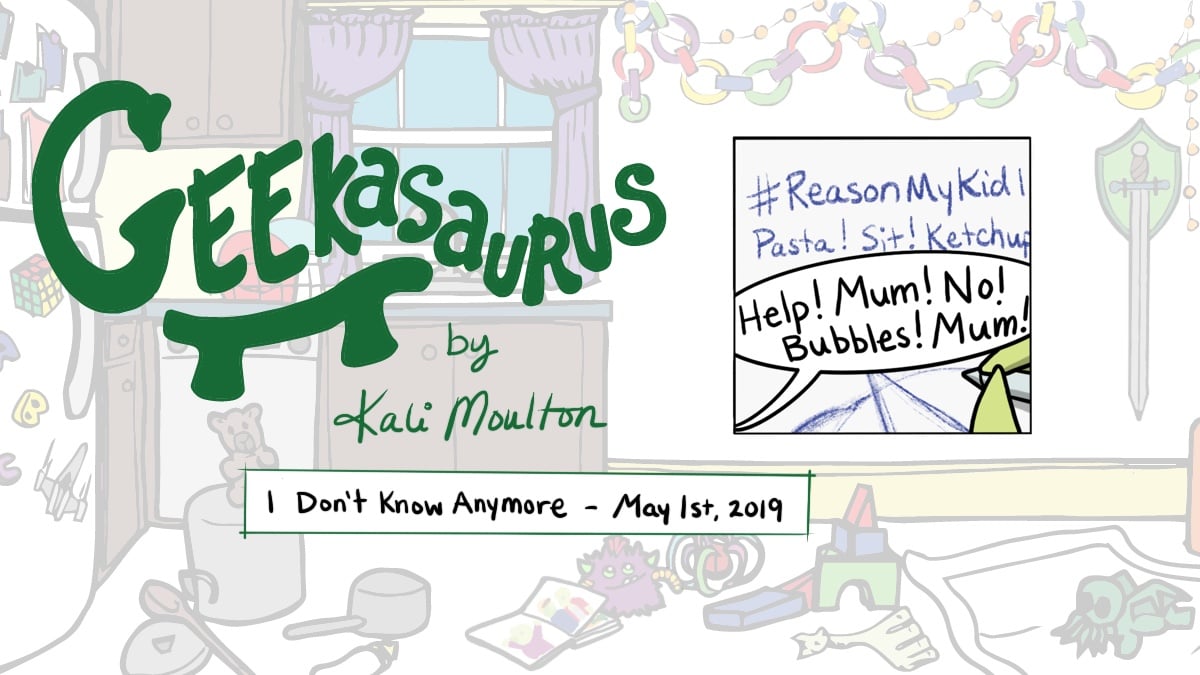