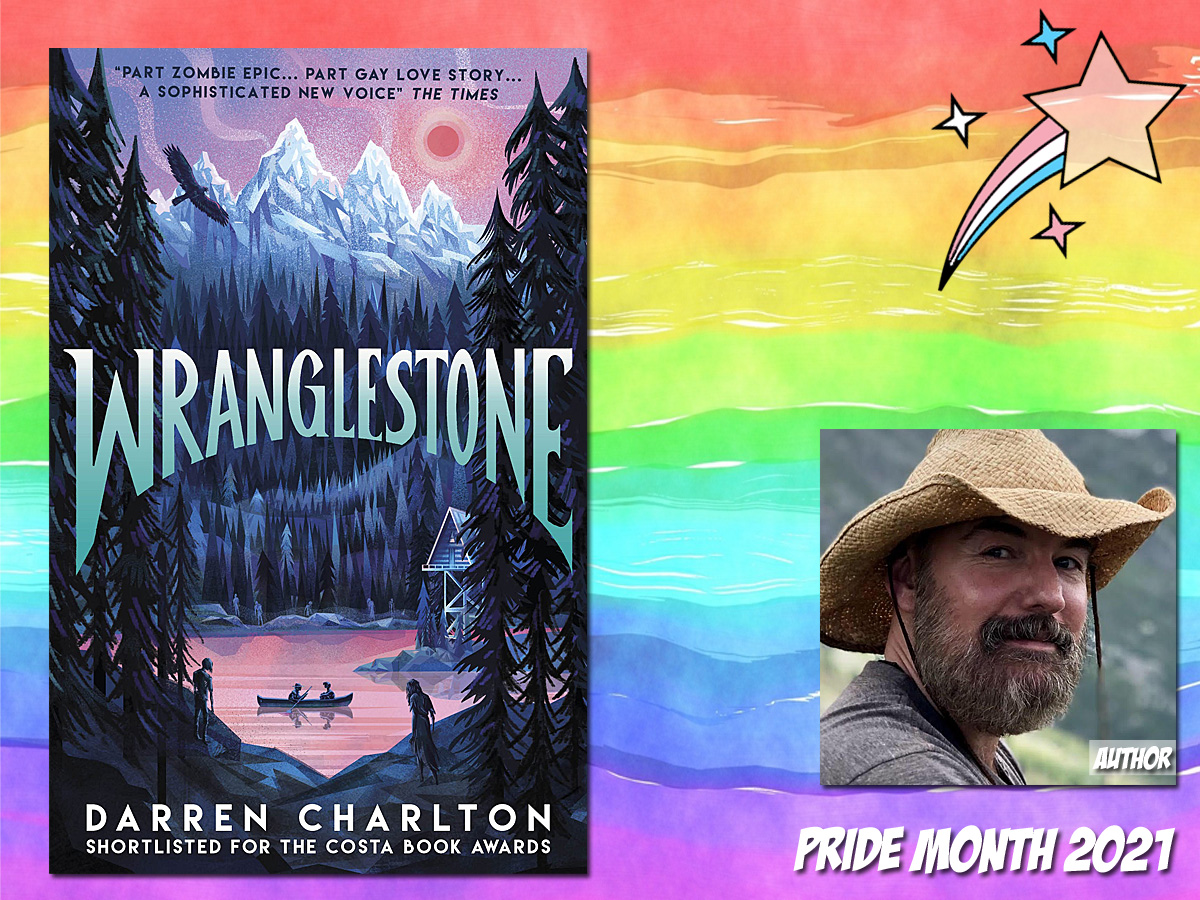 Throughout June, GeekMom celebrates Pride Month with lots of LGBTQ content. Follow the Pride Month tag to find all the content in one space (including LGBTQ content from previous years) and keep checking back for more throughout the month. Today’s book review is Wranglestone by Darren Charlton.

Wranglestone by Darren Charlton is a queer YA story set in post-apocalyptic America in the years following a global zombie contagion. It is the first book in a new series.

Fifteen-year-old Peter lives with his father on one of many small islands in Lake Wranglestone, part of the National Park Escape Program set up by the government in the wake of a zombie apocalypse that sent the world dark. In the summer, Lake Wranglestone is largely safe because the Restless Ones are unable to swim, but winter is fast approaching, and once the lake freezes over the community must band together once again for protection.

Peter is a homebody whose skills are focused more on sewing and repurposing old fabrics than on patrolling for and killing the Restless Ones, much to the distaste of many of Wranglestone’s men. He has also recently noticed fellow teen Cooper catching his eye, much to his initial confusion. After an incident where Peter’s kindhearted nature puts the Wranglestone community at risk, it is determined that he needs to start spending time ashore, learning to better understand the dangers facing the group, and picking up new skills. Although initially afraid, Peter is thrilled to have the opportunity to spend more time with the community’s golden boy Cooper.

However, an unfortunate incident quickly shows Peter that on the mainland all is not like the elders of his community have made it seem. The boys discover many secrets about the truth behind their community and must decide what to do with their newfound knowledge, unsure as to who has been in on the secrets from the beginning, and why.

Wranglestone is an interesting and unique take on both an LGBTQ romance and a zombie apocalypse story, throwing both elements together with a good pinch of politics and prejudice that make for a real page-turner. The politics at play here get under your skin because of how familiar they are, despite the dystopian/post-apocalyptic framework of the book. The setting of Lake Wranglestone is beautifully described in such a way as to make you feel as if you are really there (the UK cover is also one of the most beautiful I’ve seen this year) and the threat from the Restless Ones creeps under your skin right from the first chapter.

There is a lot going on in Wranglestone and, unfortunately, I felt that the romance between Peter and Cooper was one of the plot elements that suffered because of this. It ended up feeling rushed and less satisfying than many of the other titles on this list simply because it was having to compete for page space with so much else. This is clearly more of a plot-driven book than a character-driven one but even then, in the rush to cover so much ground, I found the plot got overly convoluted and at times I found myself struggling to wrap my head around the history being introduced and what exactly was going on. However, I found that I was willing to forgive these issues simply because the overall premise and the world-building was so good.

A sequel to Wranglestone is currently being written; Timberdark is set for release next year and I know I will be picking it up at that time. For now, I would recommend this final Pride Month choice to fans of zombies, stories set in the wilderness, and anyone looking for a gay romance with a twist.

Twelve Steps to a Compassionate Life